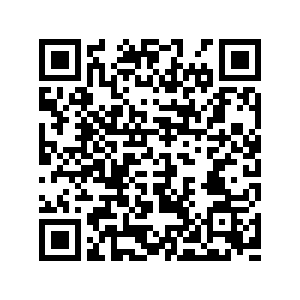 But after decades of effort China has undergone a Toilet Revolution, delivering huge benefits to rural and urban communities alike.

China's status as part of World Bank research on "people using at least basic sanitation services" is on the rise, hitting 84.8 percent of the population in 2017, up from 56.3 percent in 2000.

Visit the interactive page Toilet Revolution: Build a Toilet Yourself to find out more. 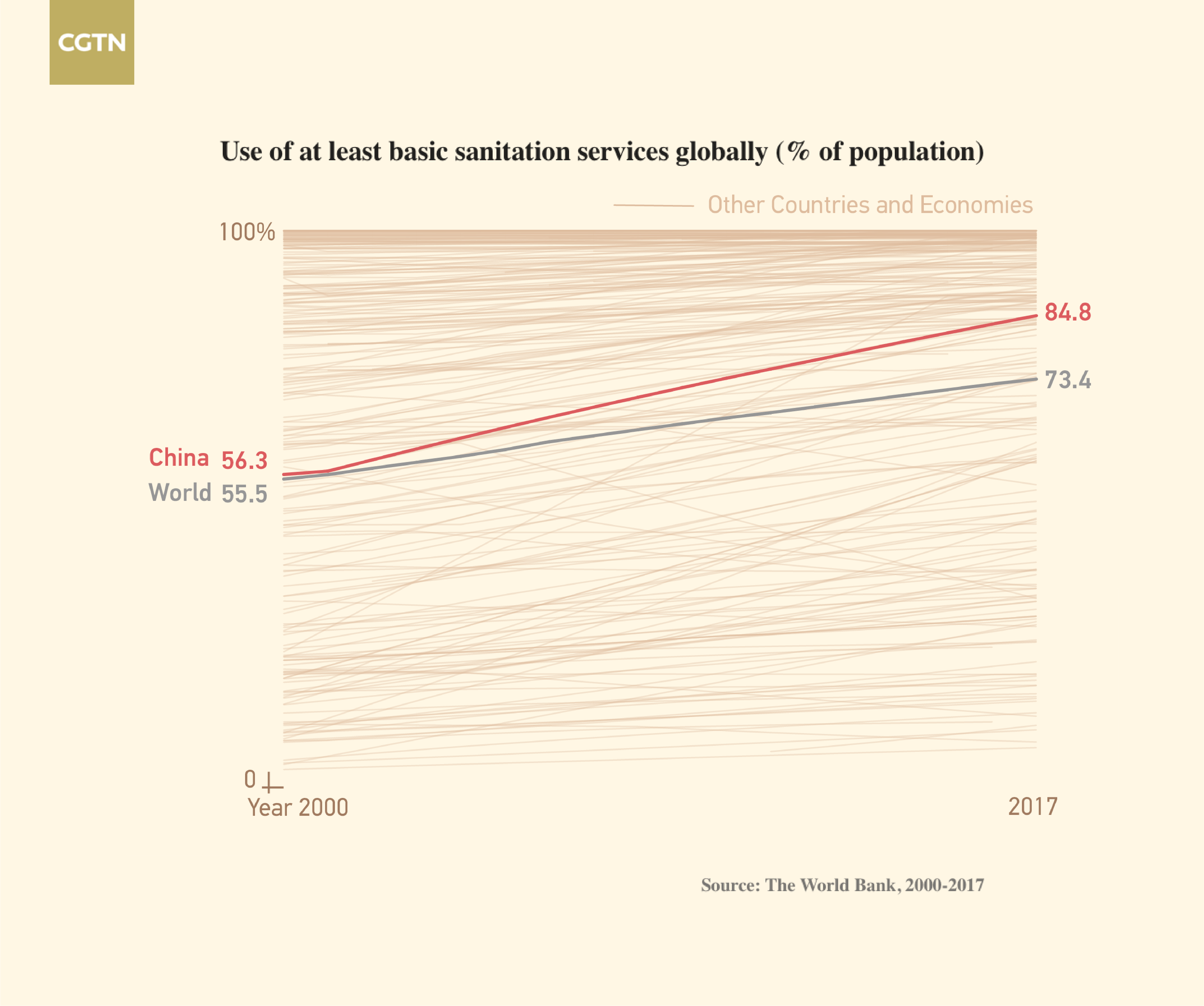 The Toilet Revolution in rural China

China's rural areas have historically had many "open-pit latrines," leading to maggots and fecal–oral disease transmission.

This is an issue worldwide.

World Health Organization research indicates there are 432,000 diarrhea deaths around the world annually, and poor sanitation is a major driver in the spread of tropical diseases including intestinal worms, schistosomiasis and trachoma.

The basic requirements for sanitary toilets are that they are enclosed but ventilated, have sealed and covered septic tanks, and that there are no fly maggots or persistent odors.

In 2019, China invested seven billion yuan (one billion U.S. dollars) in the rural Toilet Revolution, aiming for 85 percent of rural households to have access to sanitary toilets by 2020. This sum is on top of the 8.27 billion yuan spent by the government between 2004 and 2013 to tackle the issue.

The main benefit: Decline in disease

By 2018, the rural population in China hit 565 million, accounting for 40.42 percent of the total population. More than 10 million households in rural areas met the basic requirements for sanitary toilets.

The upgrading of toilets in rural areas has had multiple benefits, including a decline in fecal-related diseases such as schistosomiasis.

"Sanitary toilets can protect people from disease so they don't get sick so easily and can go to work regularly," said Jack Sim, the founder of World Toilet Organization. "It is beneficial to the economy since they reduce expenses in hospitals and medical investment." 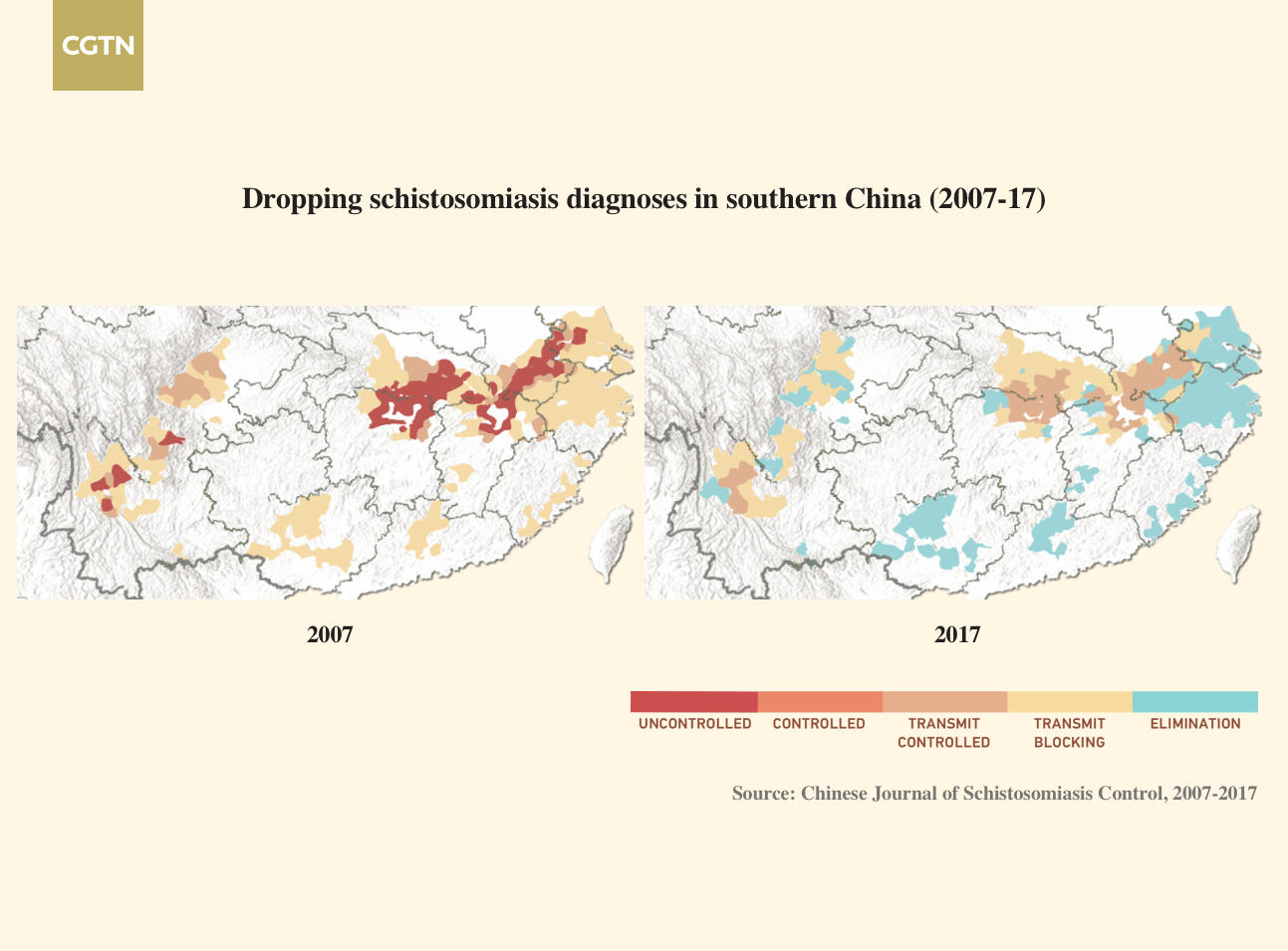 However, regional development is still imbalanced.

The overall penetration rate of rural sanitary toilets has rapidly increased since 2007, but there's still work to do.

The uptick in China's northeast and northwest regions has been striking, though these areas had low starting points. The penetration rate in these regions has risen in the ten years leading up to 2017, though this figure has generally remained lower than 50 percent, with some regions experiencing large fluctuations.

In central China, the sanitary toilet penetration rate increased slightly from 2007 to 2017, meaning that the region fares averagely in comparison to the rest of the country.

Regions in east China have maintained a high penetration rate and seen a particularly prominent increase. For example, rural areas in Shanghai ranked first in 2017 with a penetration rate of 99.1 percent.

The sanitary toilet penetration rates of south and southwest China have steadily gone up with no signs of rollback. 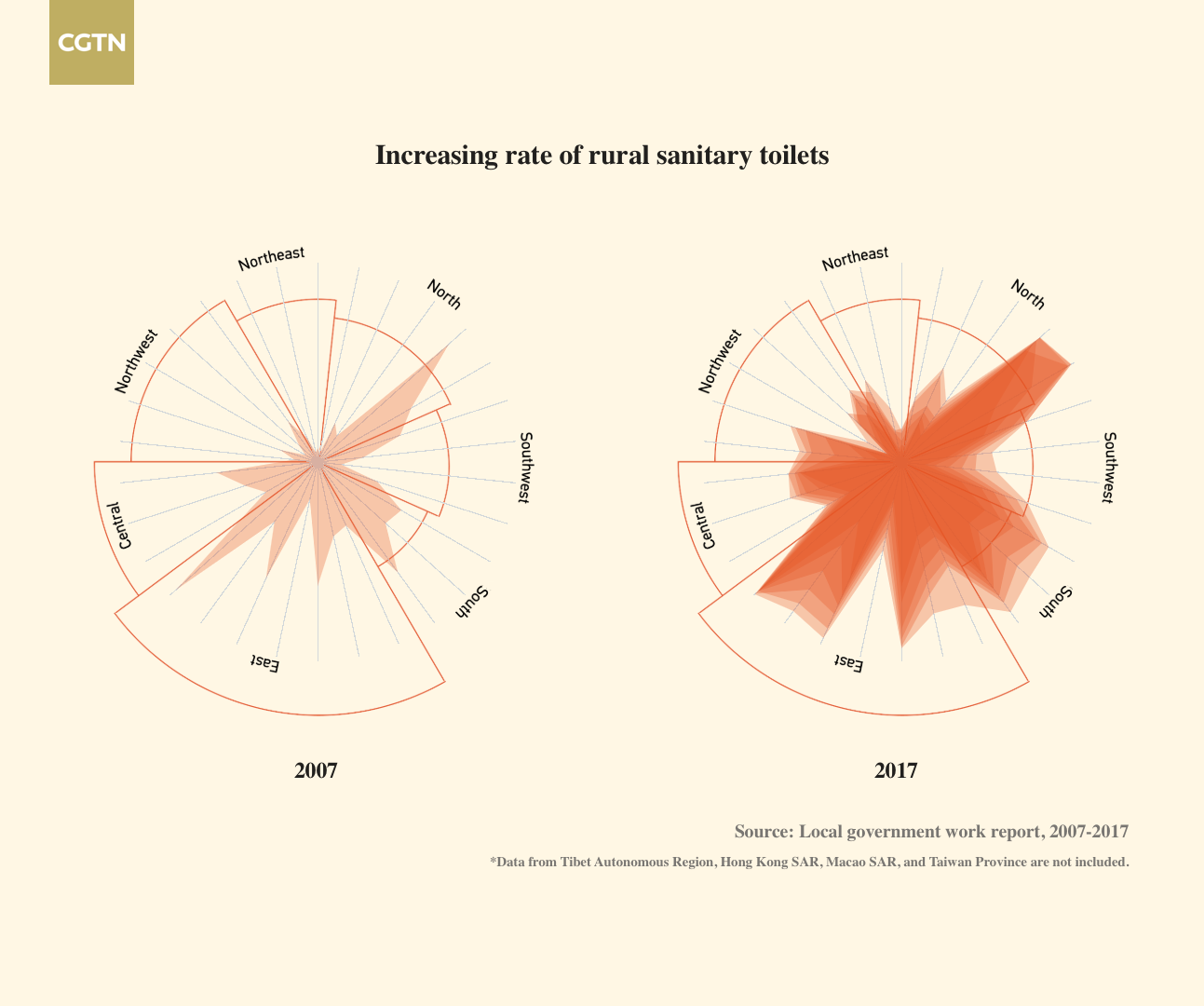 Unlike rural areas, urban public toilets in China have generally been sanitary for many years, so the focus in cities has been on making further improvements under a three step classification system.

Perfecting sewage systems, cleanliness, convenience and even aesthetics are the main goals of the urban Toilet Revolution.

Strict classification: What to change in urban toilets?

Urban public toilets in China are evaluated into three classes based on sanitary conditions, location, size, type of toilets and aesthetics. 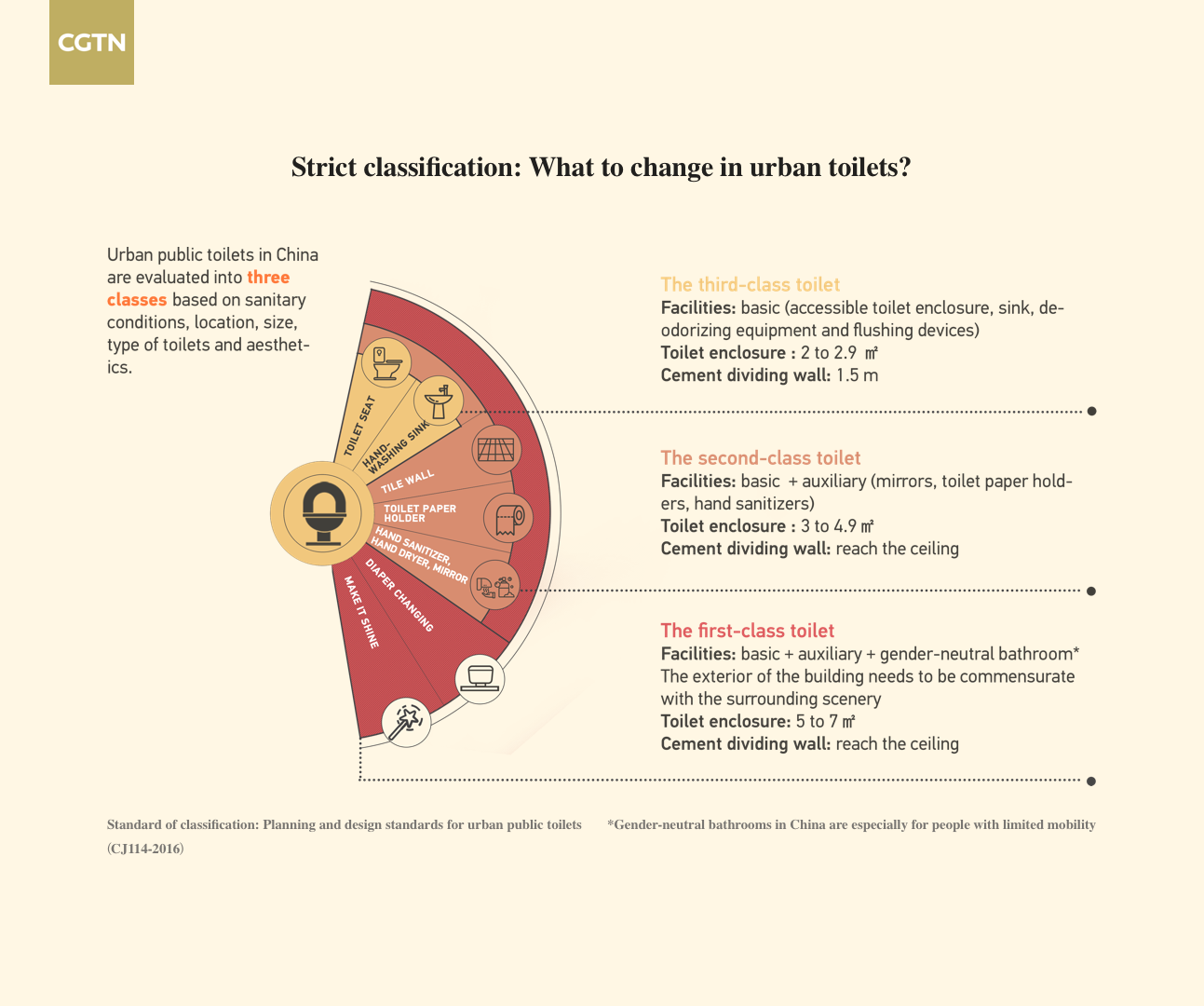 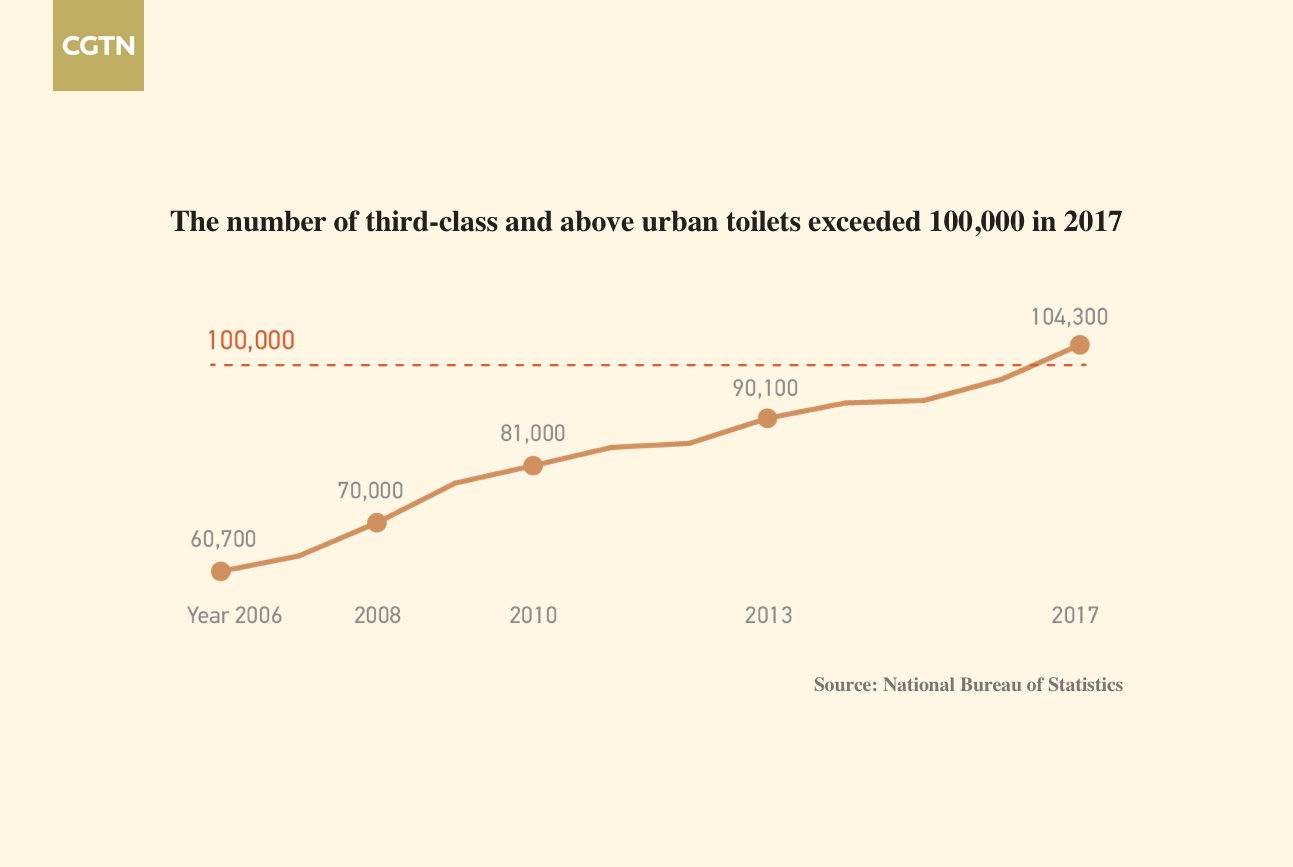 From 2015 to 2017, the National Tourism Development Fund invested 1.64 billion yuan (232 million U.S. dollars) on the Toilet Revolution. As of 2017, the total number of third-class and above toilets exceeded 100,000, amounting to about 75 percent of the total number of urban public toilets. China's Ministry of Culture and Tourism said about 21,000 toilets will be built or renovated at tourist sites in 2019.

An individual uses the toilet six to eight times per day, spending an average of three years in them throughout their lifetime, according to the Chinese Center for Disease Control and Prevention.

Today, Chinese attitudes toward toilets are gradually changing in both rural and urban areas. "The main obstruction is how to change people's minds," said Jack Sim, who founded the World Toilet Organization in 2001. He thinks it's essential to foster a healthier toilet culture in China, arguing that this is beneficial to the economy, health and wellness development in the long term.