Analysis: Are we seeing the beginning of Arab Spring 2.0?
By Abhishek G Bhaya 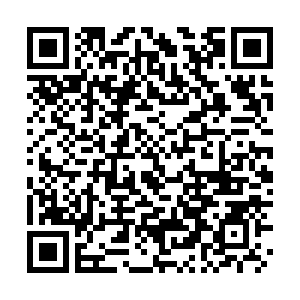 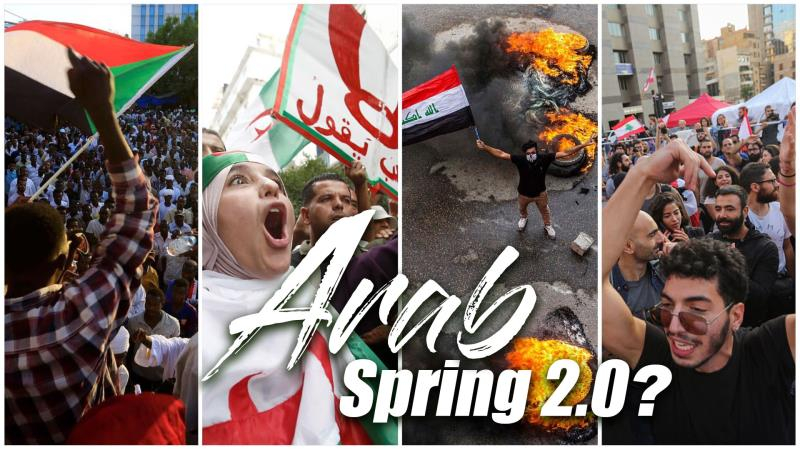 A new wave of anti-government protests is sweeping through several countries in the Arab world, increasingly escalating in recent weeks, in reminiscence of similar unrest that began in 2010-11, collectively known as the Arab Spring. The ongoing protests in Iraq, Lebanon, Algeria and Sudan appear to herald a new season of civil unrest and calls for democracy in the Middle East.

Many analysts believe the region could indeed be going through a second wave of uprisings with some even describing it as Arab Spring 2.0, while others argue the first Arab Spring had never ended and that the political turmoil being experienced today is a logical outcome of the events that began nine years ago, according to a regular survey of experts by Carnegie Middle East Center.

"The Arab Spring never died. It just went dormant, overtaken by the brutality of events in Syria, Libya, Yemen, and Egypt. The roots of this second wave of mass protests hearken back to the 2010-11 Arab uprisings. Yet, they have spawned something different. Absorbing some of the lessons from the earlier uprisings, the 2019 protests have evolved," Mona Yacoubian, senior adviser for Syria, the Middle East, and North Africa at the Washington, DC-based United States Institute of Peace, said in the Carnegie Survey.

Noting that the four countries – Algeria, Sudan, Iraq, and Lebanon – that have witnessed waves of protests in 2019 are the ones that stayed out of the Arab Spring in 2011, Dalia Ghanem, resident scholar at the Carnegie Middle East Center, said the character of the current protests are different than the last time as people in these countries were still shaken by previous years of conflict and political violence. 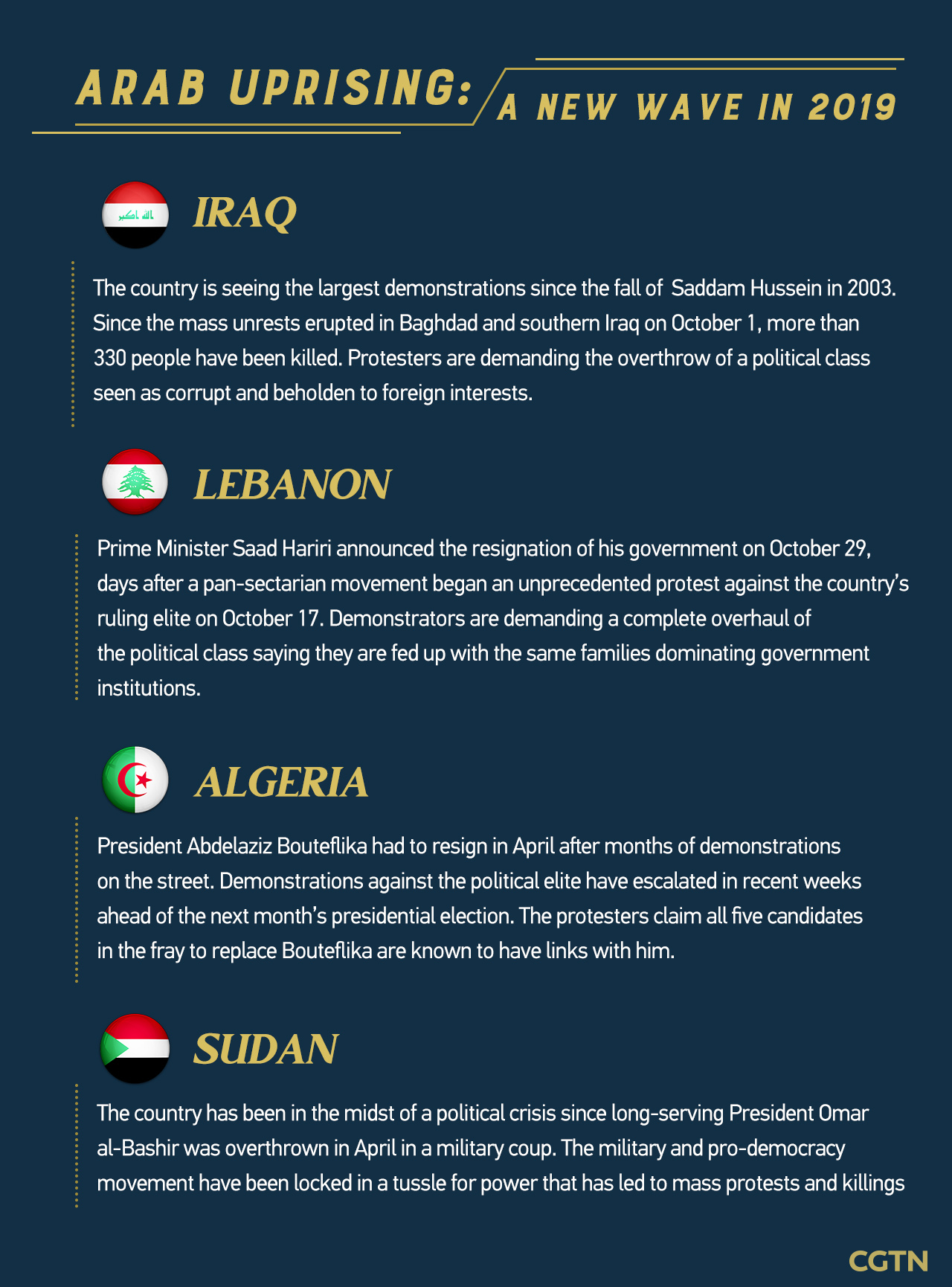 Referring mainly to the protests in Algeria, Ghanem remarked: "This is a new season of discontent, but this time the means employed are peaceful. There are three main reasons for this: Because people learned from their past and their neighbors; because they want to maintain their movement in time and attract more supporters nationally and internationally; and because they do not want to give their governments a chance to use repressive tactics against them and put an end to their mass demonstrations."

"This new wave of protests is happening now because social discontent has been mounting for years and the same reasons that led to the 2011 uprisings are still present in the region. If I only take the case of Algeria, the drop in oil prices in mid-2014 led to a deterioration in the economic situation, and by 2019 the government was no longer able to buy social peace as it had in 2011," she added.

Concurring with Ghanem, Yacoubian pointed out that the ongoing wave of unrest showed that the protesters were cultivating a resistance to the darker, destructive forces that bedeviled their neighbors.

"In Lebanon and Iraq, demonstrators rail against sectarianism (a driver of the Syrian conflict), instead promoting a more vibrant national identity. In Sudan, a fragile power-sharing agreement between the military and civilian opposition emerged after months of mass protests that began over rising bread prices. However, the protests gathered enormous popular support and did not succumb (as in Egypt) to divisive ideologies, political rivalries, or even the use of force. They persisted," she elucidated.

Ishac Diwan, Chaire Monde Arabe at Paris Sciences et Lettres, professor at the Ecole Normale Supérieure, Paris is certain that the region is in the throes of a second wave of Arab Spring that, in time, may affect more countries.

"As we enter the winter of 2020, this wave of public discontent is likely to engulf other countries. The main difference with the first wave in 2011 lies in the underlying economic conditions. Back in 2011, oil prices were at a peak and economies were growing at their fastest pace in decades. With the collapse in oil prices after 2014, the economic situation is now much more difficult," he noted.

"Growth has slowed, public debts have risen, and unemployment is higher. Ruling regimes now have fewer resources to finance their clientelism. So while a yearning for dignity fueled the earlier uprisings, today's protests are propelled much more by hunger," he contended.

Agreeing with Yacoubian that the second wave has drawn important lessons from the first, Diwan explained that this time around the protesters are no longer content with bringing down aging autocrats, but are are targeting the deep state.

"They are avoiding getting divided along identity lines; and they are demanding the organization of meaningful new elections. The challenge for each country is to find a path toward a political and economic transition that can satisfy the street. So far, even democratizing Tunisia has not yet discovered a way forward. History is on the march again, but what comes next is anyone's guess," he added.

Marwan Muasher, the vice president for studies at Carnegie, in a recent commentary, argued that the first Arab Spring ended in 2013 for two reasons: either because Arab governments quashed the protests with force, money, or both; or because the Arab public saw what happened in Libya, Syria, and Yemen and did not want their own situation to deteriorate into civil war.

"But the problems that created the protests did not disappear, only the protesters themselves. And when oil prices declined in 2014, many governments in the Arab world lost an effective tool to mollify their citizens' economic grievances. Despite nearly being toppled, most of them still have not internalized that the rentier system that keeps them in power, backed by high oil prices and patronage underpinnings, is no longer viable," Muasher remarked, elaborating on the reasoning offered by Ghanem and Diwan on the impact of oil prices in Arab uprisings.

"Arab governments who clung to power may have thought they weathered the storm and were safe. But today's protests show that they didn't make good use of their reprieve. There were no political reforms to make systems more inclusive, and no economic reforms to address corruption, improve governance, and create jobs. The problems continued, and they have now led a wiser group of protesters back to the streets," he remarked.

Muasher insisted that the new wave – an Arab Spring 2.0 – is focused on the same issues but protesters have learned from their mistakes, and are seeking new goals and using new means to achieve real, lasting, regional changes.

"It is far from clear if this new season of protests will yield more sustainable and peaceful change, resilient to violence and chaos. Yet the 'green shoots' of the 2019 uprisings offer some reason for hope," Yacoubian quipped.