The third day of impeachment hearings in the House of Representatives marked the first time that officials from inside the White House publicly expressed their misgivings about a freewheeling pressure campaign that now threatens Trump's presidency.

Senior U.S. officials told impeachment investigators in Congress on Tuesday they were concerned by President Donald Trump's effort to get Ukraine to investigate a political rival, with one White House official calling it a "shock."

The White House's top Ukraine expert, wearing his Army dress uniform, said Trump had made an "improper" demand of Ukraine President Volodymyr Zelensky in a July 25 phone call that has become the centerpiece of the Democratic-led impeachment probe of the Republican president.

"Frankly, I couldn't believe what I was hearing. It was probably an element of shock that maybe, in certain regards, my worst fear of how our Ukrainian policy could play out was playing out," Army Lieutenant Colonel Alex Vindman said. 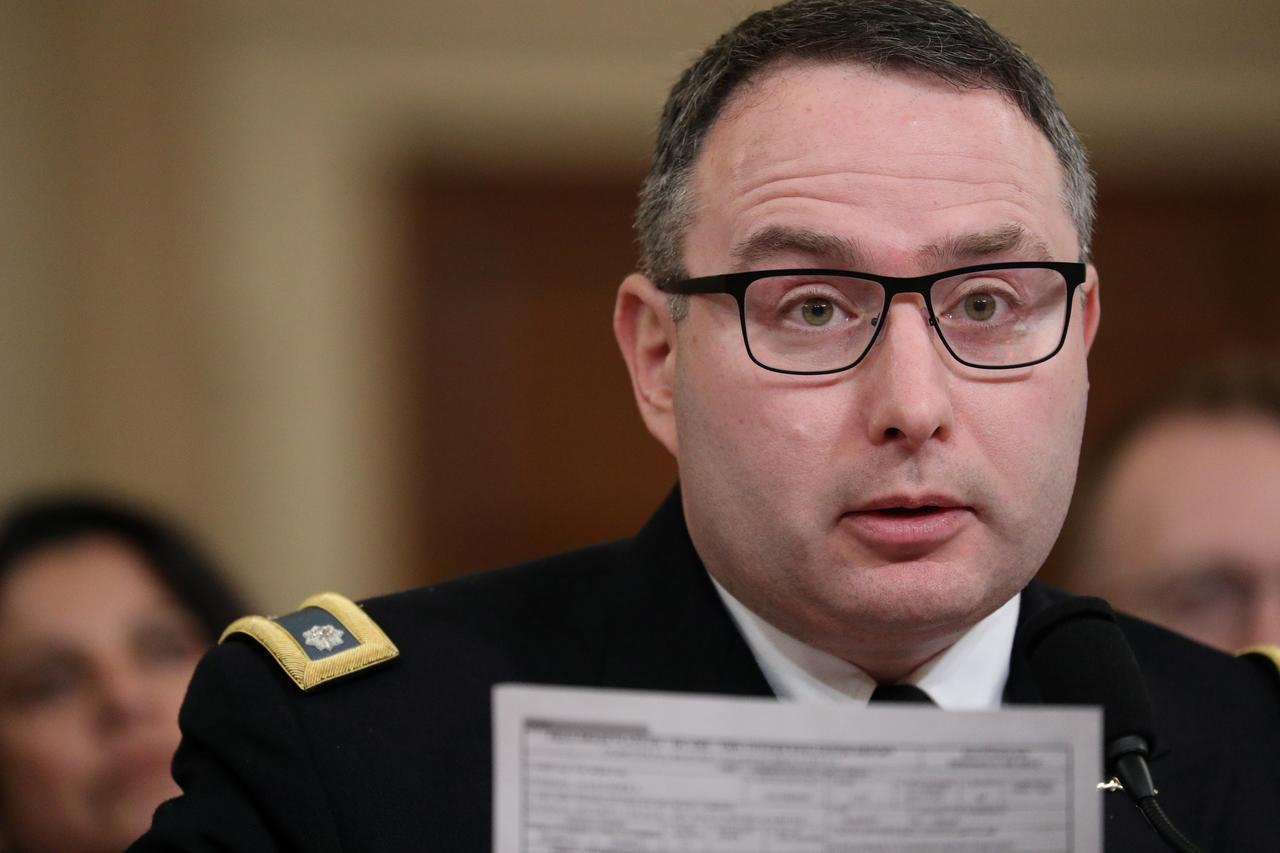 As he was testifying, the White House's official Twitter account attacked his judgment, undermining the same man the administration appointed to lead its European affairs brief at the National Security Council.

Two other senior White House aides, Jennifer Williams and Tim Morrison, also said they were concerned by the political nature of that phone call.

Williams testified she also found the July 25 phone call "unusual because, in contrast to other presidential calls I had observed, it involved discussion of what appeared to be a domestic political matter." 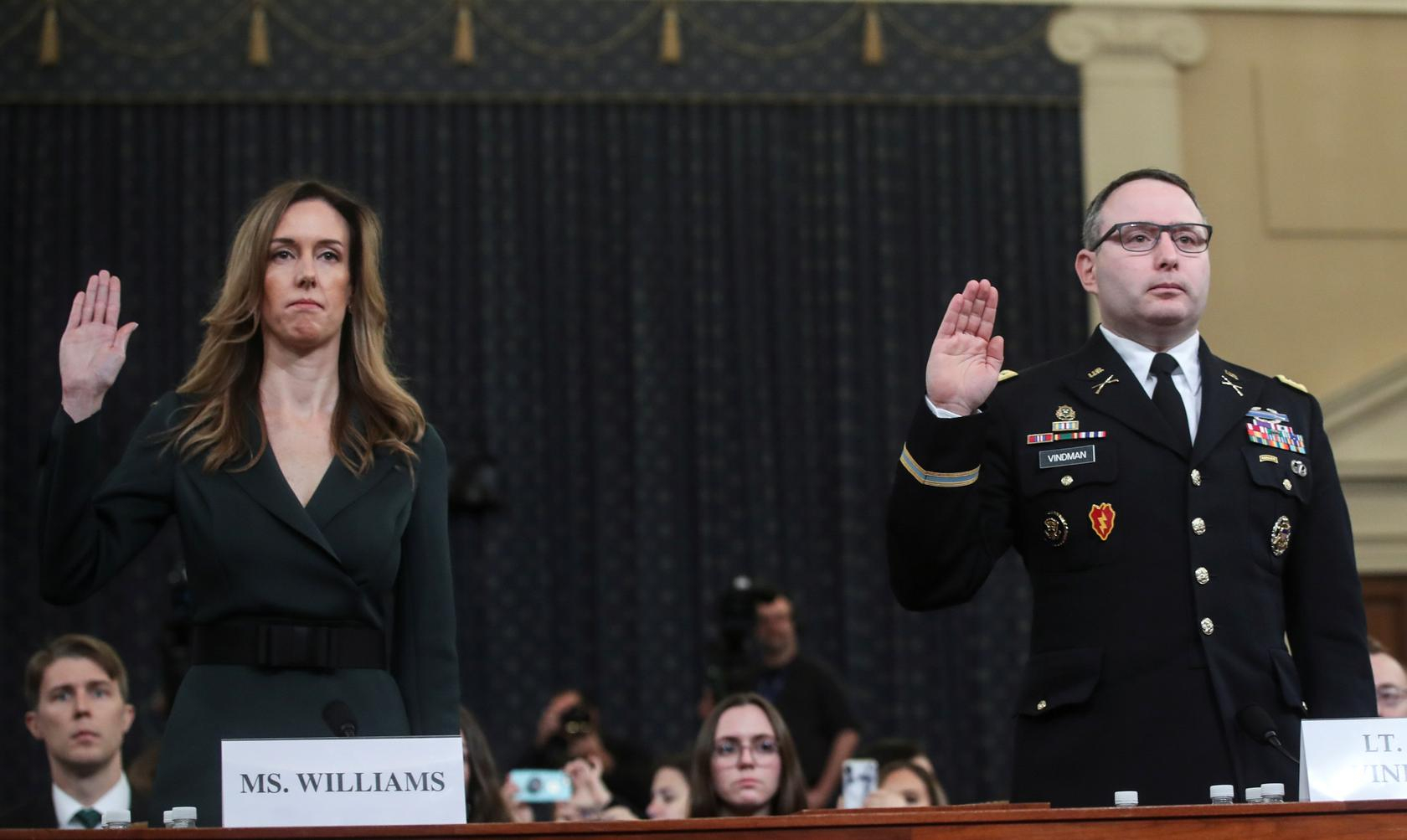 Morrison said he did not see anything improper in the call but was concerned that its contents could leak, hurting bipartisan support for Ukraine. "I wanted access to be restricted," he said.

During that call, Trump asked Zelensky to carry out two investigations that would benefit him politically, including one targeting Joe Biden, the former vice president who is a leading Democratic presidential contender to face Trump in next year's election, and his son Hunter Biden.

The other involved a debunked conspiracy theory embraced by some Trump allies that Ukraine, not Russia, interfered in the 2016 U.S. election.

Kurt Volker, a former U.S. envoy to Ukraine, dismissed Trump's belief that Joe Biden was somehow trying to protect his son in Ukraine or that the country possessed the hacked Democratic National Committee server as "conspiracy theories."

He added that allegations of corruption involving Biden and his son, who was a director of Ukrainian energy company Burisma, were "not credible." 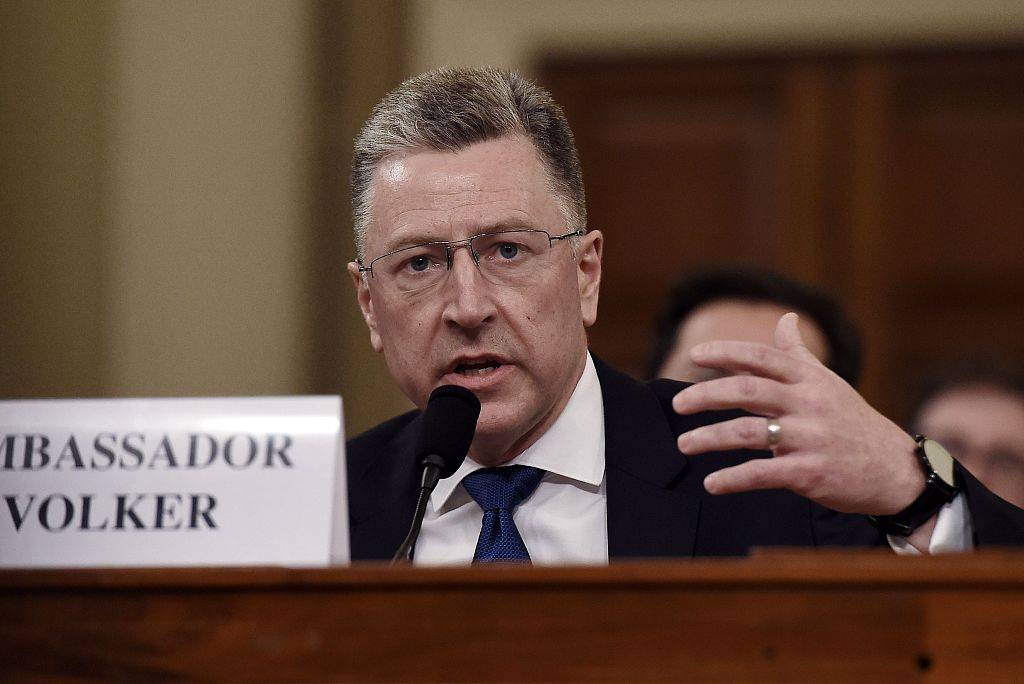 Trump has said his call with Zelenskiy was "perfect," while Republican lawmakers criticize the impeachment process as unfair.

"What's going on is a disgrace, and it's an embarrassment to our nation," Trump told reporters on Tuesday. "It's a big scam."

Republican U.S. Representative Francis Rooney told reporters: I don't think there's been a crime proven yet. ... But I want to see what happens. There's still a lot of water to go down this creek."

Ahead of the July call, Trump had frozen 391 million U.S. dollars in U.S. security aid approved by Congress to help Ukraine combat Russia-backed separatists in the eastern part of the country.

"He said they 'tried to take me down,'" Volker added.

"In retrospect, I should have seen that connection differently, and had I done so, I would have raised my own objections," he said.

Volker's testimony conflicted in some aspects with an earlier account he gave to lawmakers.

In closed-door testimony in October, Volker said he had not heard any references to investigations during a July 10 White House meeting between U.S. and Ukrainian officials.

On Tuesday, he said Gordon Sondland, the U.S. ambassador to the EU, made a "generic" comment about investigations that everyone regarded as inappropriate.

Vindman moved by a 'sense of duty'

Trump has attacked both Williams and Vindman on Twitter as "Never Trump" witnesses, a term he uses to describe Republicans who oppose him.

As he was testifying, the White House's official Twitter account attacked his judgment and the president's son Donald Trump Jr. assailed him in a separate Twitter post as "a low level partisan bureaucrat and nothing more."

Vindman, whose family fled the Soviet Union four decades ago when he was 3 years old and settled in the United States, told lawmakers that "character attacks" against public servants testifying in the impeachment inquiry were "reprehensible."

A U.S. official said Vindman and his family might be moved to a military base because of security threats.

Vindman said he was not worried that he would suffer reprisals for speaking out.

"This is a country I have served and defended, that all of my brothers have served, and here, right matters," he said, drawing applause.

Vindman said he felt compelled to report his concerns about not only the July 25 call but also a July 10 meeting where Sondland emphasized the importance of Ukraine delivering the investigations into the 2016 election and the Bidens.

"It is improper for the president of the United States to demand a foreign government investigate a U.S. citizen and political opponent," Vindman said. "This would undoubtedly result in Ukraine losing bipartisan support, undermine U.S. national security, and advance Russia's strategic objectives in the region."

The investigation could lead the House to approve formal charges against Trump, called articles of impeachment, that would be sent to the Republican-controlled Senate for a trial on whether to remove him from office. Few Republican senators have broken with Trump.

Senate Majority Leader Mitch McConnell said on Tuesday it was "inconceivable" that two-thirds of the Republican-controlled chamber would vote to convict Trump.

According to Reuters/Ipsos polling, 46 percent of Americans support impeachment, while 41 percent oppose it.

Last Friday's testimony attracted an average audience of 12.9 million viewers across seven U.S. television networks that aired lived coverage, according to data from the Nielsen ratings agency, down slightly from the audience on the first day. The numbers did not include people who streamed the event on phones or computers or followed the proceedings via social media.