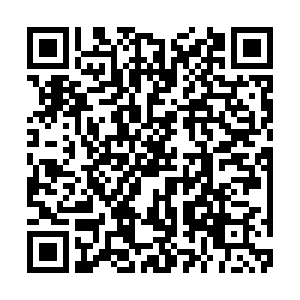 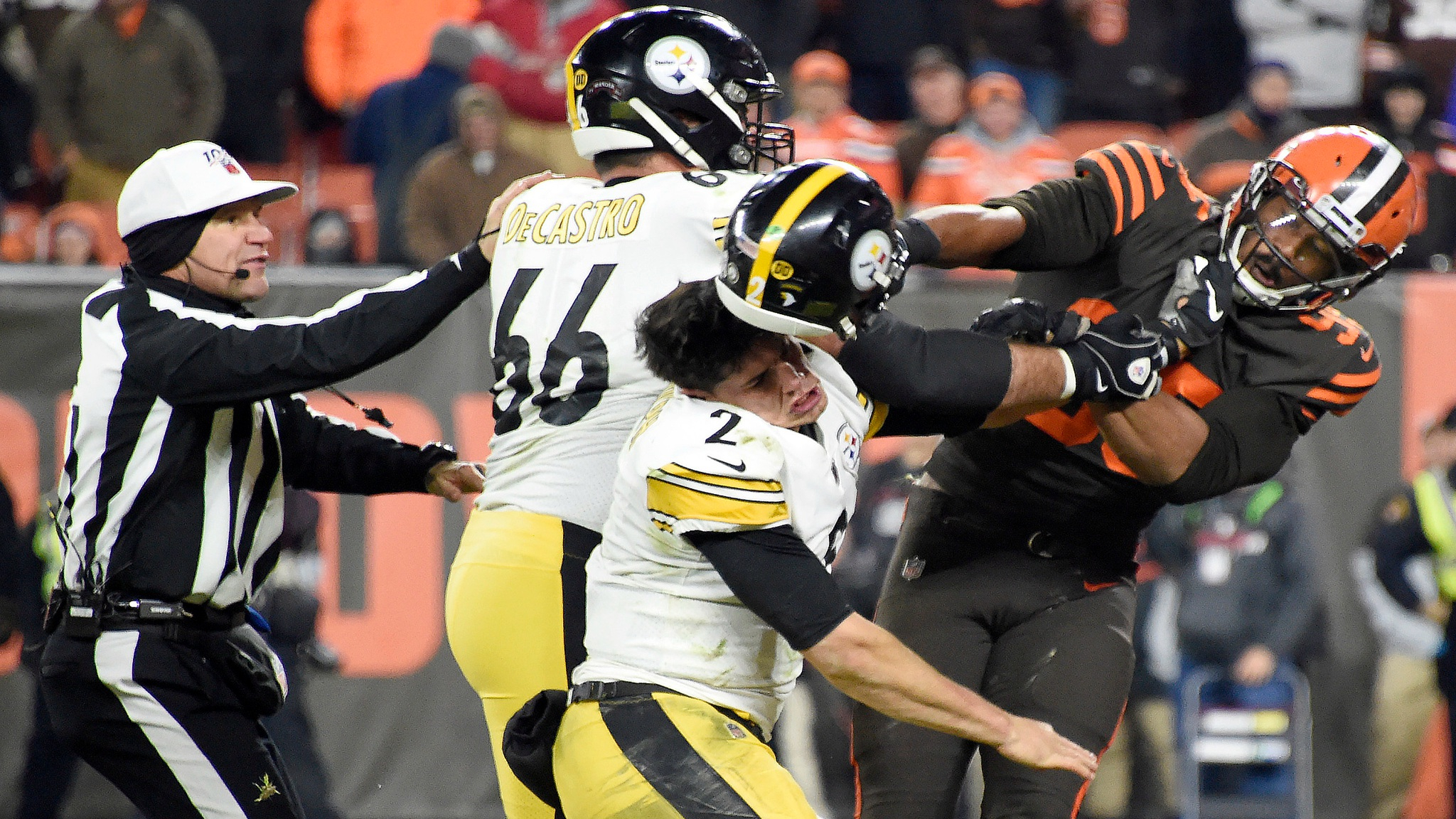 Cleveland Browns defensive end Myles Garrett's goal was to be NFL's top defensive player this season. He won't finish it.

Garrett's indefinite suspension for smashing Pittsburgh Steelers quarterback Mason Rudolph over the head with a helmet was upheld Thursday by an appeals officer who decided the severe penalty on the Cleveland Browns star defensive end is fair.

One of the league's most dominant edge rushers, Garrett is banned for the final six regular-season games and playoffs – if Cleveland qualifies – for pulling off Rudolph's helmet and cracking him with it in the closing seconds of the Browns' 21-7 win over their AFC North rival last week.

On Wednesday, Garrett attended his appeals hearing in New York and made his case to former player James Thrash for a reduction of his penalty, which will damage Cleveland's season and stain the 24-year-old's budding career.

Thrash didn't find enough compelling evidence to lessen Garrett's punishment, which will keep him off the field until 2020 – at the earliest.

As part of his historic suspension for using his helmet "as a weapon," Garrett must also meet with Commissioner Roger Goodell's office before he can be reinstated. He's been fined 45,623 U.S. dollars.

Appeals officer Derrick Brooks, a Pro Football Hall of Fame linebacker, did reduce the suspension for Steelers center Maurkice Pouncey from three games to two for punching and kicking Garrett following the shocking assault on Rudolph, who earlier this week said he "should have done a better job keeping my composure in that situation."

Brooks also upheld a fine of 35,096 U.S. dollars for Pouncey, who will miss the Steelers' rematch with the Browns on December 1 at Heinz Field in Pittsburgh, where the atmosphere is intense for every game between Cleveland and Pittsburgh. 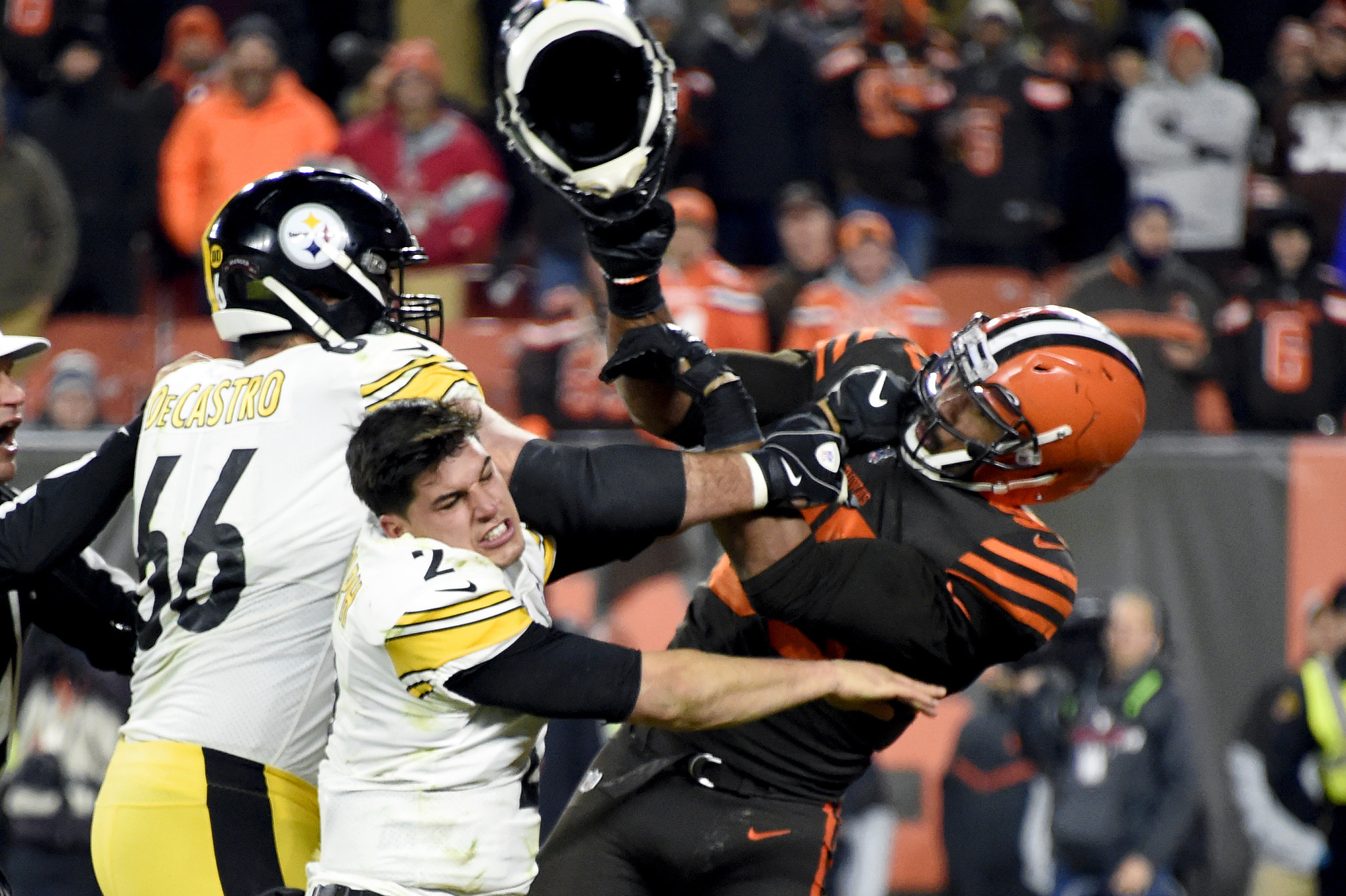 Caused by a racial slur?

Garrett claimed his Pittsburgh opponent Rudolph used a racial slur against him before his wild helmet-swinging attack on the Steelers player, ESPN reported on Thursday.

Garrett made the claim – strongly denied by representatives for Rudolph and the Steelers – during an unsuccessful NFL appeal against his record suspension on Wednesday, ESPN reported.

"Mason Rudolph vehemently denies the report of being accused of using a racial slur during the incident Thursday night in Cleveland," the Steelers said in a statement.

"He will not discuss this accusation any further and his focus remains on preparation for Sunday's game against the Cincinnati Bengals."

Rudolph's attorney Timothy Younger said the allegation of racism by Garrett was a "desperate attempt to mitigate his suspension" and questioned why the Cleveland player had not raised it before his appeal.

"This is a lie," Younger said in a statement. "This false allegation was never asserted by Garrett in the aftermath of the game, never suggested prior to the hearing, and conspicuously absent in the apology published by the Browns and adopted by Garrett."

"The malicious use of this wild and unfounded allegation is an assault on Mason's integrity which is far worse than the physical assault witnessed on Thursday. This is reckless and shameful. We will have no further comment."

Browns tackle Sheldon Richardson said Garrett didn't mention anything to him about Rudolph making a comment.

"I wouldn't doubt it, though," said Richardson, who felt Rudolph deserved a suspension. "Had to be something to get him out of his body. ... I know he wouldn't lie on nothing like that." 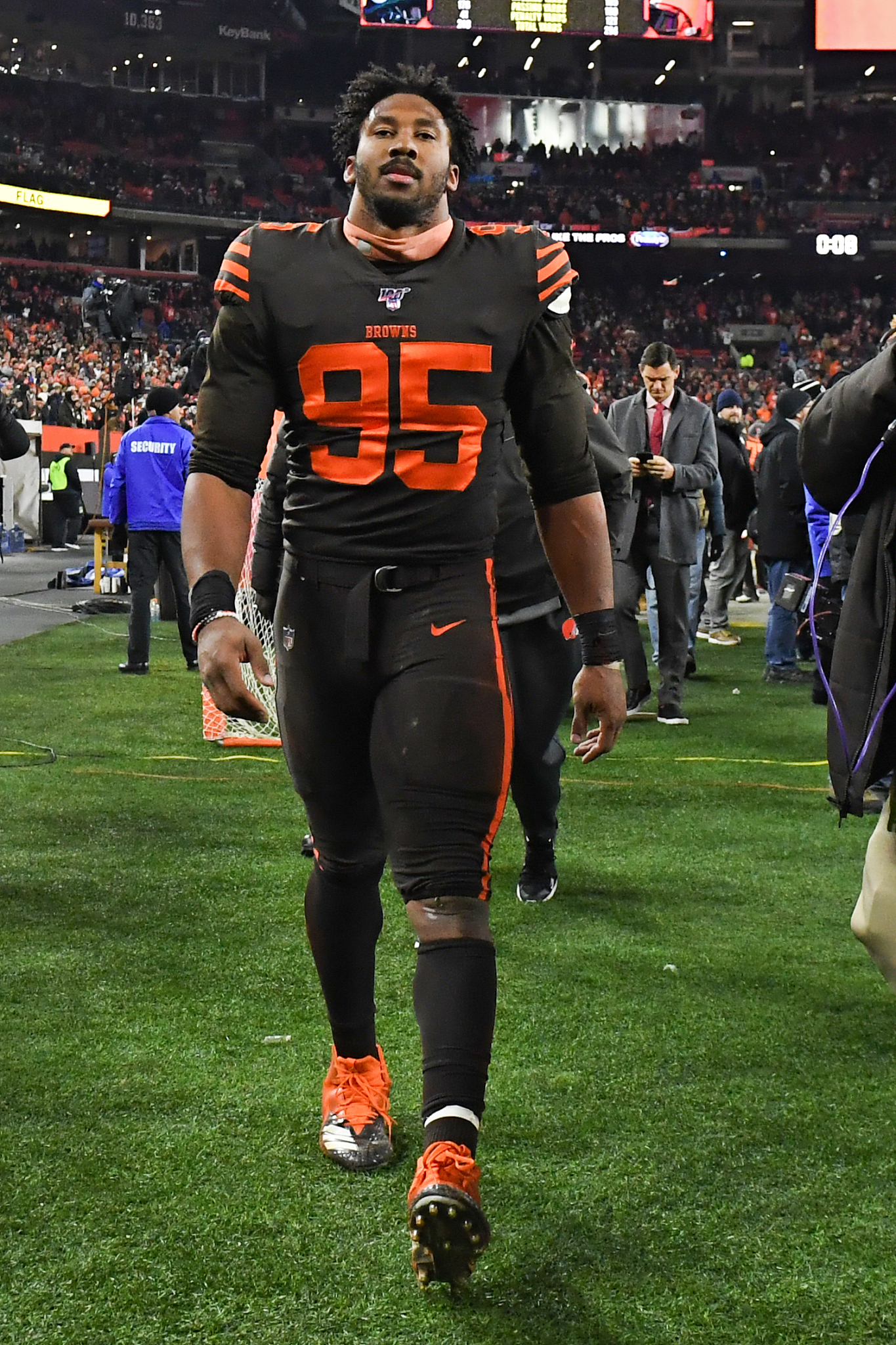 Cleveland Browns defensive end Myles Garrett walks off the field after being ejected for hitting opponent Mason Rudolph of Pittsburgh Steelers (not pictured) during their game in Cleveland, Ohio, U.S., November 14, 2019. /VCG Photo

Cleveland Browns defensive end Myles Garrett walks off the field after being ejected for hitting opponent Mason Rudolph of Pittsburgh Steelers (not pictured) during their game in Cleveland, Ohio, U.S., November 14, 2019. /VCG Photo

Garrett's out of character behavior

Garrett will lose 1.14 million U.S. dollars in salary and his absence is a significant setback to the Browns, who will be without their best defensive player as they try to end a postseason drought dating to 2002.

The suspension is the longest issued for a single on-field behavior. Tennessee defensive lineman Albert Haynesworth was suspended five games in 2006 for stomping on the face Cowboys center Andre Gurode in 2006.

Garrett's stunning behavior was out of character for the soft-spoken Pro Bowler who likes to write poetry. His teammates were shocked by what happened, and several wondered if Rudolph, who avoided suspension but will be fined, did something to trigger the outburst.

"Whatever the actions were, this is a guy I've never seen anything like that," wide receiver Odell Beckham Jr. said moments before Thrash's decision was announced. "Who knows? You don't know whatever evidence and things they find. I'm just praying there's a resolution for him. He's a very good dude and we all miss him."

"It's still one of those things where you can't really swing a helmet like a weapon," he said. "It's tough to justify that no matter what's happening. Obviously in the heat of the moment it could anger you even more if that's what was said, and you could see why he was kind of upset out there. End of the game, you'd think he would want to try to get off the field and stuff, but you really never know."

"That's the crazy part with life is you have two people and you're probably never going to find out the exact truth. It's always somewhere in between usually."

Browns defensive tackle Larry Ogunjobi was suspended one game for shoving a helmet-less Rudolph to the ground. Thrash upheld his suspension on Wednesday.

Several players from both teams are expected to be fined for leaving their respective sidelines as the officials tried to restore order during the game's chaotic ending. Those penalties will be released Saturday.

The Browns and Steelers organizations were each fined 250,000 U.S. dollars for their roles in the incident. Both released statements stating regret.