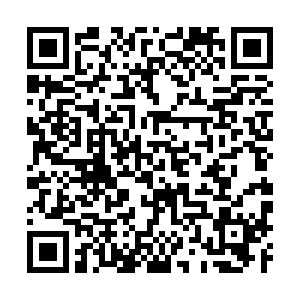 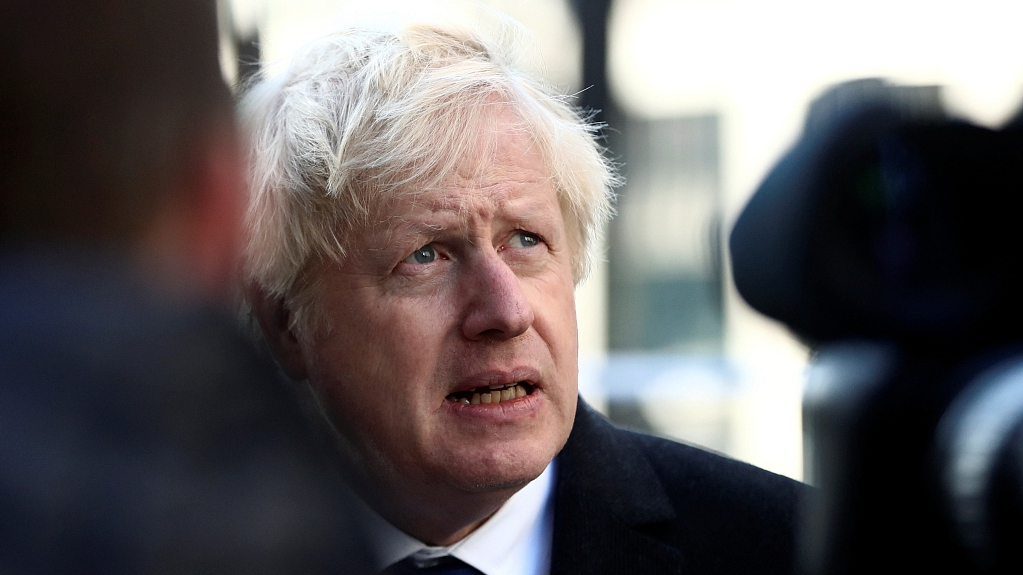 Prime Minister Boris Johnson speaks to the media as he attends the London Bridge crime scene, after a terrorist wearing a fake suicide vest who killed two people with knife, was shot dead by police in London, November 30, 2019. /VCG Photos

Prime Minister Boris Johnson speaks to the media as he attends the London Bridge crime scene, after a terrorist wearing a fake suicide vest who killed two people with knife, was shot dead by police in London, November 30, 2019. /VCG Photos

British Prime Minister Boris Johnson's Conservative Party's supportive rate maintains at 43 percent, while that of his rival Labour Party slightly increased to 34 percent, according to the latest YouGov Poll results on Sunday.

YouGov, a data analyzing firm whose election poll analyzing model successfully predicted the voting results of the 2017 UK election, released the data on The Sunday Times.

Previous estimates of voters' intended choices from at least 10,000 registered voters was two days before the London Bridge terrorist attack on Friday, when a man stabbed two people to death and before being wrestled to the ground by bystanders.

The previous estimates on Wednesday showed that 32 percent of the voters interviewed intended to vote for the Labour Party, whose support increased to 34 percent on Sunday. 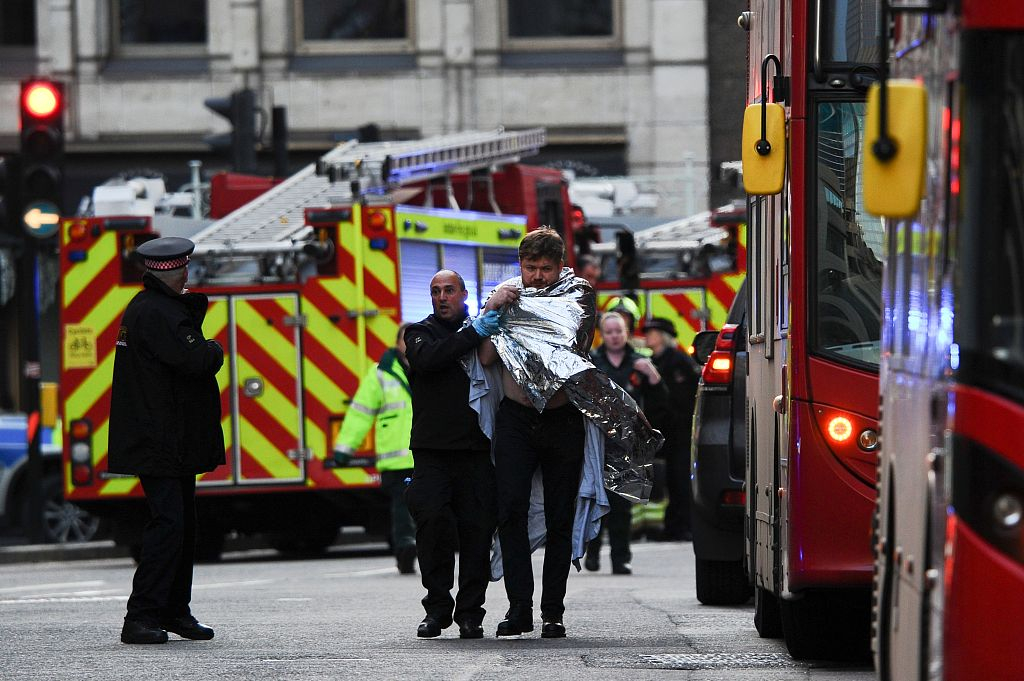 Police assist an injured man near London Bridge after reports of shots being fired on London Bridge in London, November 29, 2019. /VCG Photos

Police assist an injured man near London Bridge after reports of shots being fired on London Bridge in London, November 29, 2019. /VCG Photos

The attacker went on the rampage just before 2 p.m. (1400 GMT), targeting people at Fishmongers' Hall near London Bridge in the heart of the city's financial district – the scene of a deadly attack by Islamist militants two years ago.

Several politicians have criticized the Tories for their cuts to UK police funding after the recent terrorist attack on the London Bridge. Representatives from Labour, Plaid Cymru, Green Party and the SNP all criticized these cuts over the past nine years in a debate on the BBC on 29 November.

The Observer newspaper also reported similar trends citing a poll by Opinium, a London-based research company. The support for the Conservatives stood at 46 percent, down one point, while Labour rose by three points to 31 percent, with the gap still remains wide at 15 points, said the newspaper.

Opinium polled 2,018 people between November 27 and 29, the day of the London Bridge attack incident.

The UK is gearing up for a general election on 12 December, when voters will decide who they want to run the country.

The UK voted for Brexit in the 2016 referendum, but politicians have been unable or unwilling to agree on how the UK should leave the EU.

Without a parliamentary majority, the prime minister has also struggled to pass any new legislation since taking the position in July. Therefore, he decided to push for an early general election – the next election was originally scheduled for 2022 – to break the political stalemate.

Johnson has said that his version of a post-Brexit immigration system outlined in his recent manifesto will be in place by 1 January, 2021 if the Tories win the general election. This system would be based on Australia's points system.

Under this plan, freedom of movement, which allows European citizens and British people to migrate freely between the United Kingdom and European Union, would continue for 11 months after Brexit, and then new immigrants would be given visas based on the new guidelines. In this system, points would be given based on a variety of factors including a person's education level, English language proficiency and age.

A similar system is already in place in the UK for non-EU nationals. In the UK's current immigration system, there is a cap of 21,000 work permits for non-EU immigrants.

The Tories will also lower this number if they win the election and would limit the number of low skill workers allowed into the UK.

About 46 million people aged 18 and over will be eligible to vote on 12 December.