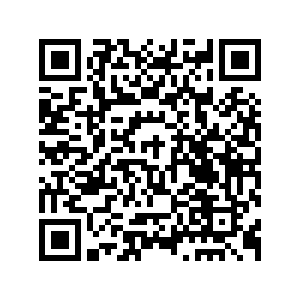 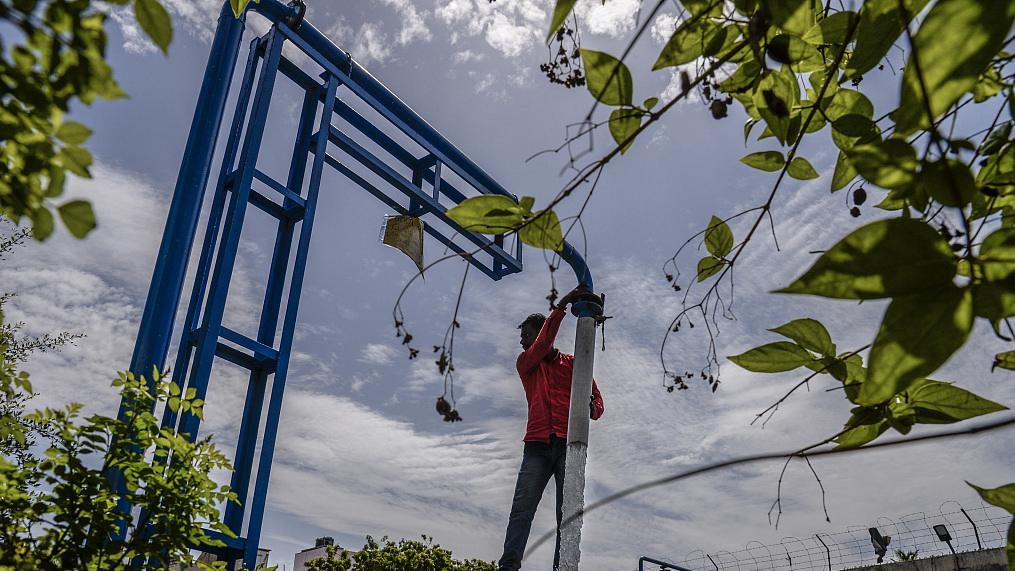 A water tanker operator fills his tanker at the Metro Water Station in the heart of Chennai, India, June 29, 2019. /VCG Photo

A water tanker operator fills his tanker at the Metro Water Station in the heart of Chennai, India, June 29, 2019. /VCG Photo

Editor's note: Cheng Xizhong is a visiting professor at Southwest University of Political Science and Law , and a senior fellow of the Charhar Institute. The article reflects the author's opinions, and not necessarily the views of CGTN.

During Narendra Modi's the first term of office as India's prime minister, India's economy grew by 7.63 percent annually, having created an economic miracle since the country's independence. Prime Minister Modi started his second term on May 30 this year, after his Bharatiya Janata Party and its coalition won a landslide victory in the Lok Sabha election.

However, Modi`s second term has not started well. According to the latest data released by the Central Bureau of Statistics at the end of last month, India's economic growth in the third quarter this year fell to 4.5 percent from 5 percent in the second quarter of this year. This is the lowest level in more than six years. Moody's, an international credit rating agency, has lowered India's economic growth forecast in 2019 to 5.6 percent from the original forecast of 5.8 percent, and lowered India's economic outlook rating from "stable" to "negative."

There are many reasons for India's sudden economic decline. First, in recent years, India's agriculture has been hit by crop failure and low profits. From June to September this year, there were severe droughts in some areas of India.

Second, about one-third of India's population is below the international poverty line, which makes it difficult to drive domestic consumption.

Fourth, India's backward infrastructure and complex business environment have not only restricted foreign capital from entering India, but also failed to stop India's own capital flowing out. 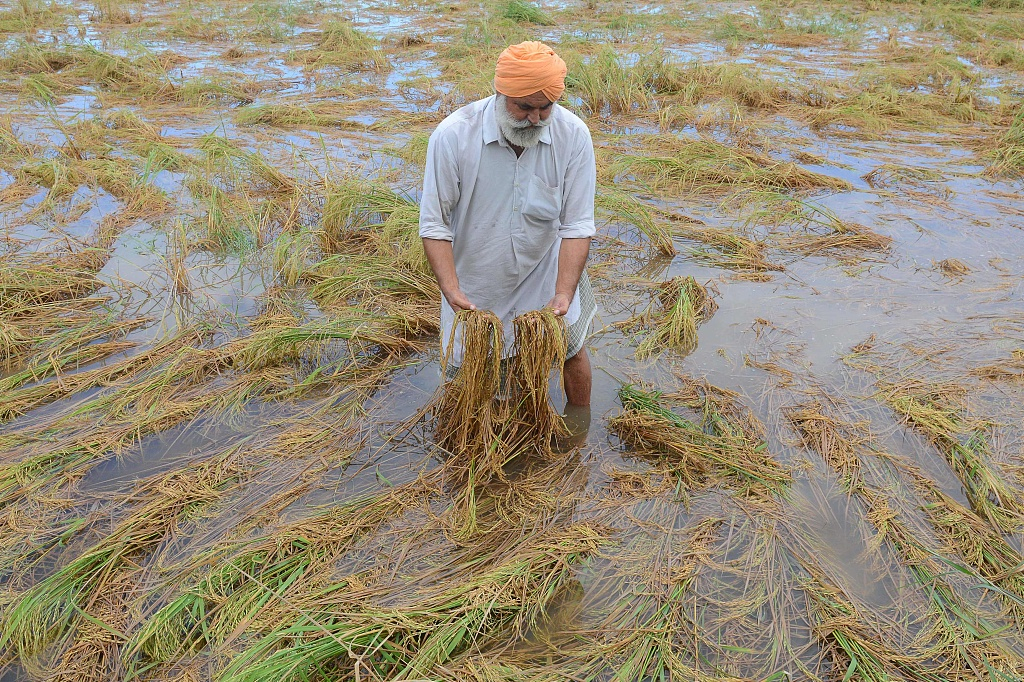 An Indian farmer looks at damaged rice crops after heavy rains, on the outskirts of Amritsar, India, September 24, 2018. /VCG Photo

An Indian farmer looks at damaged rice crops after heavy rains, on the outskirts of Amritsar, India, September 24, 2018. /VCG Photo

In addition, relations between India and Pakistan since early this year have been highly strained. On February 14, Indian paramilitary troops were attacked in Indian-controlled Kashmir, and India immediately accused Pakistan of supporting terrorism, thus causing tensions between the two countries.

On August 5, India unilaterally amended its constitution to revoke the disputed Kashmir's autonomous status, while Pakistan took comprehensive countermeasures, which further intensified the tensions. To some extent, the worsening of relations between the two neighbors has offset India's efforts to improve its economy.

Recently, India's Finance Minister Nirmala Sitharaman said at the business summit of India's Economic Times that India would implement a five-year plan for infrastructure construction. In the next five years, India will invest more than 100 trillion rupees (1.39 trillion U.S. dollars) for construction of a number of large-scale infrastructure projects.

The five-year plan can be regarded as a major measure to arrest further economic slide. Whether it will work depends on India's determination for reforms and domestic and foreign policies.

In terms of reform, the Indian government faces multiple obstacles. First, the conservative thoughts seriously hinder the reform process of Modi's government. Second, India is a federation, where its states have their own laws, which affects the authority of the central government and the implementation of central policies. Third, India's opening up is slow, even suspended, for example, India's withdrawal from the Regional Comprehensive Economic Partnership (RCEP) negotiations. 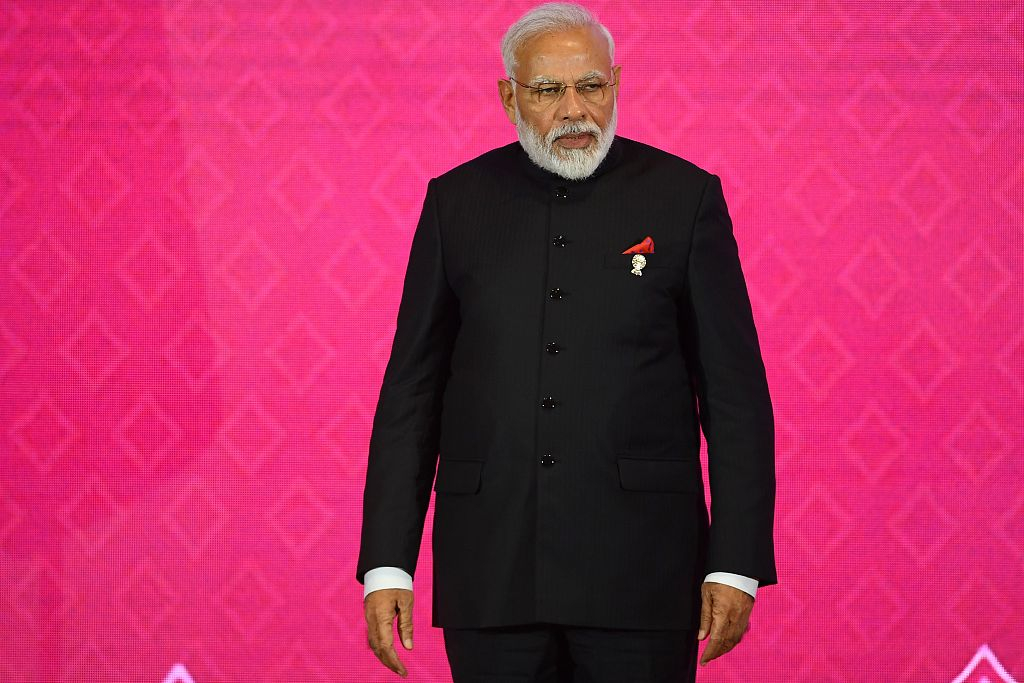 Taking these into account, it can be concluded that India has made its choice to protect its backward domestic industries because it's not in advantage to compete with the other 15 RCEP members in the free trade.

India began to devote itself to economic development in the 1990s. Due to its over-consideration of immediate interests, over-consideration of gains and losses in reform and opening-up, as well as the intricate religious and ethnic conflicts in India, and tense relations with neighboring countries from time to time, India's total GDP and per capita GDP are relatively low.

China and India are both emerging powers. During the two informal meetings, the leaders of the two countries reached important consensus on how to develop bilateral cooperation under the present international situation, put forward clear objectives on deepening and expanding practical cooperation, and decided to establish a high-level economic and trade dialogue mechanism, strengthen the docking of economic development strategies, and explore the establishment of manufacturing industry partnership.

After 40 years of reform and opening-up and economic development, China now has both capital and technology advantages, which are very suitable for the Indian market. A large number of Chinese enterprises are ready to increase their investment in the Indian market. The key now lies in India's investment environment and reform measures. The total population of China and India is 2.7 billion. If China and India work together for peaceful development and economic prosperity, it will be a great contribution to mankind.