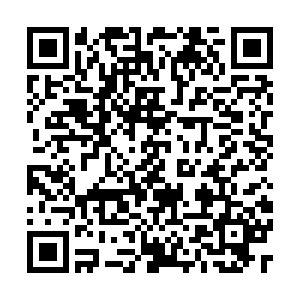 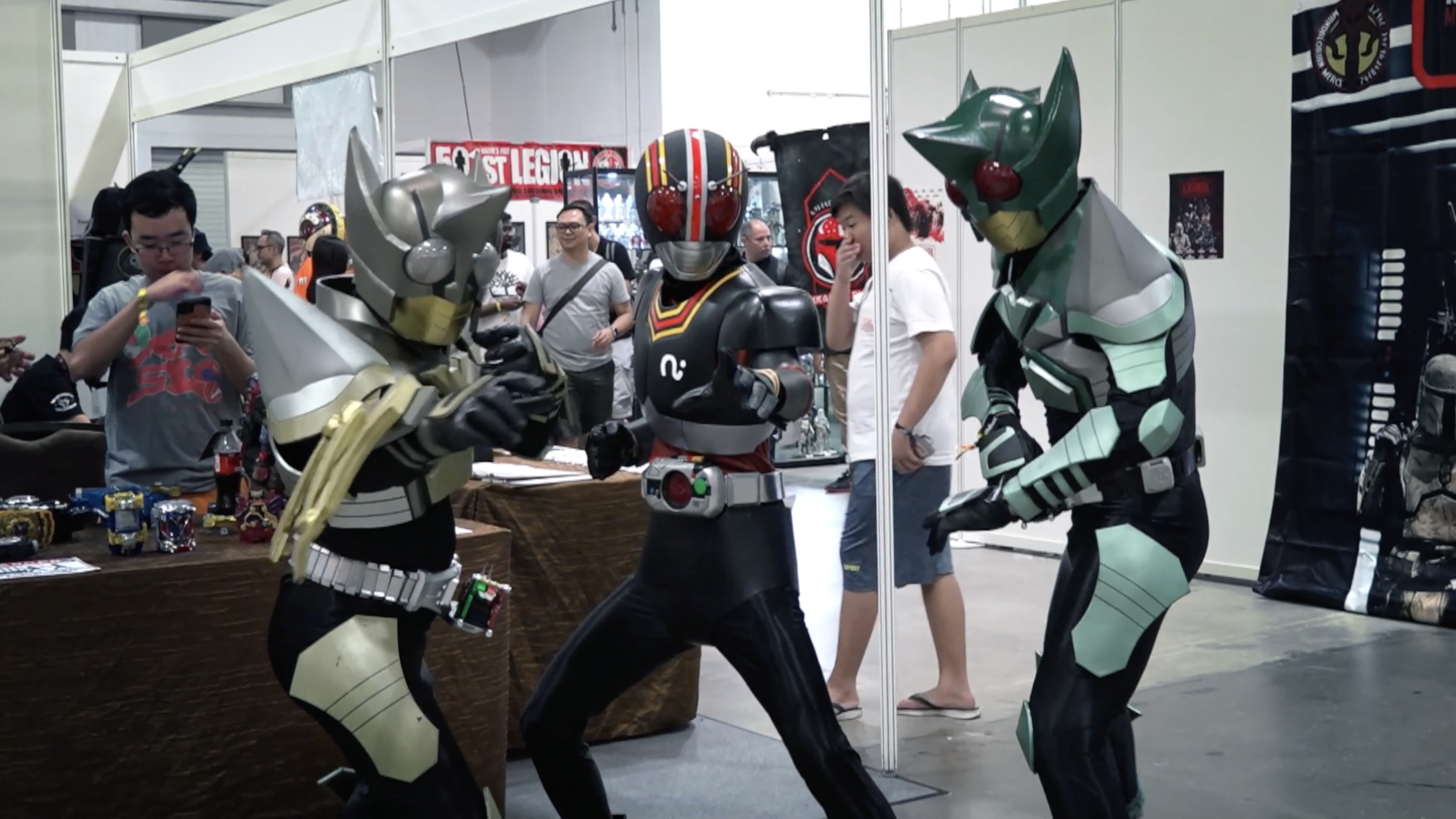 Heroes and villains. Gamers and comic book enthusiasts. Movie and TV buffs, toy lovers, and of course, cosplayers!  Singapore Comic Con 2019 was truly an exciting gathering of all things pop culture - both Western and Asian.

Though in its 12th edition, it was previously known as the Singapore Toy, Game & Comic Convention or STGCC. Rebranded, this year was the first time that it was held under the name Comic Con.

"The whole idea is to make it more accessible - from the very hard core geeks to the new fans to families. That's one of the major reasons why we rebranded," said Suhaimi Sainy, the senior manager of Special Projects at Reed Exhibitions.

"There are a lot of new fans and they may not be familiar with STGCC, the previous acronym." But say you are "a fan of the Big Bang Theory and you know that Sheldon goes to Comic Con every year, you kind of get it," Sainy added.

And as expected, the rebranding did the trick. Long, snaking queues could be seen outside the venue as early as 7:30 in the morning on the first day.

Most Comic Con regulars that we spoke to, echoed Sainy's enthusiasm. Media professional Victoria Cheng has attended several renditions of the comic convention in its previous years. 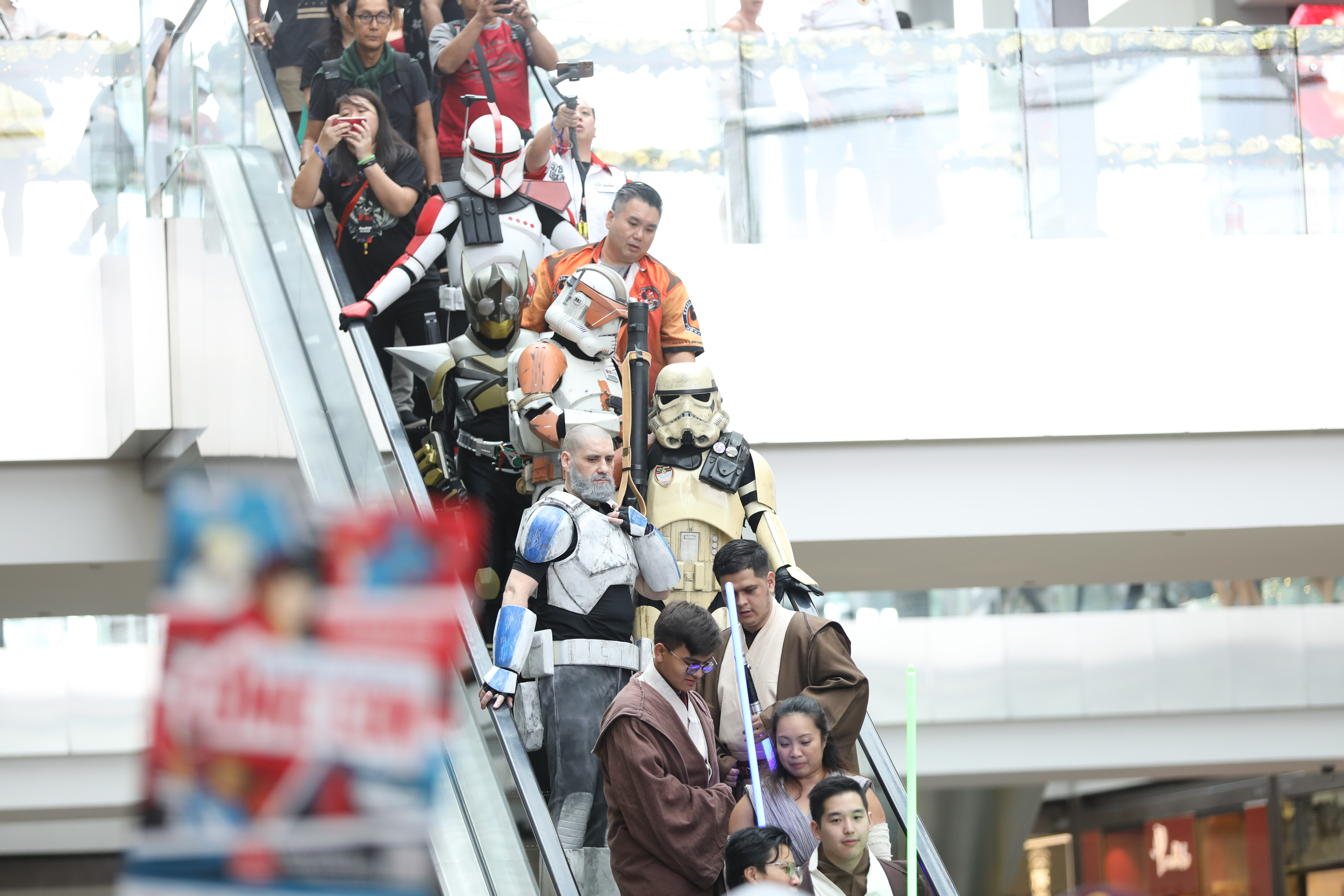 Crowds were full of people dressed as their favorite movie and comic book characters. There were spidermen, deadpools, Star Wars storm troopers, a Chewbacca, some Captain Americas.. .well, you get the picture.

We saw fans of all ages, of all nationalities and from different professions, united in their love for comics and games - the excitement palpable on their faces - ready to own their favorite merchandise and limited edition, comic con exclusive collectables.

The two-day convention saw a star-studded line up of comic legends and illustrators Greg Capullo, Andy Kubert and David Mack.

One of the main stage panel discussions was with Jock, the three-time New York Times best-selling artist, who is well known for his work on Batman: The Black Mirror, The Losers and the Oscar-winning movie, Ex Machina.

During the panel, Jock gave an insight into working on high profile movies like "Dredd" and "Star Wars: The Last Jedi".

"There was direction, but it was very free to try anything you wanted. And in fact, Luke's force projection costume was entirely my concept, my design, my idea, everything. That's maybe my proudest moment...that's Luke Skywalker ideal form. To have a direct influence on that character is amazing."

Moving to the gamers, there was PVP Esports where regional teams battled it out in Mobile Legends: Bang Bang and Dota 2.

Gamersaurus Rex also held tournaments all day long with games such as Dungeons vs. Dragons, Warhammer, and Song of Ice and Fire.

The sprawling Artist Alley gave fans a chance to meet their favorite international artists, interact with some local illustrators and purchase special merchandise and products.

Of the many artist booths that we visited, we came across 'the band of doodlers'. They are a doodling community made up of artists with keen interests in doodling, drawing, graffiti and illustration. One of their key tasks this year was to guide young doodlers on how to draw on the Comic Con community wall. 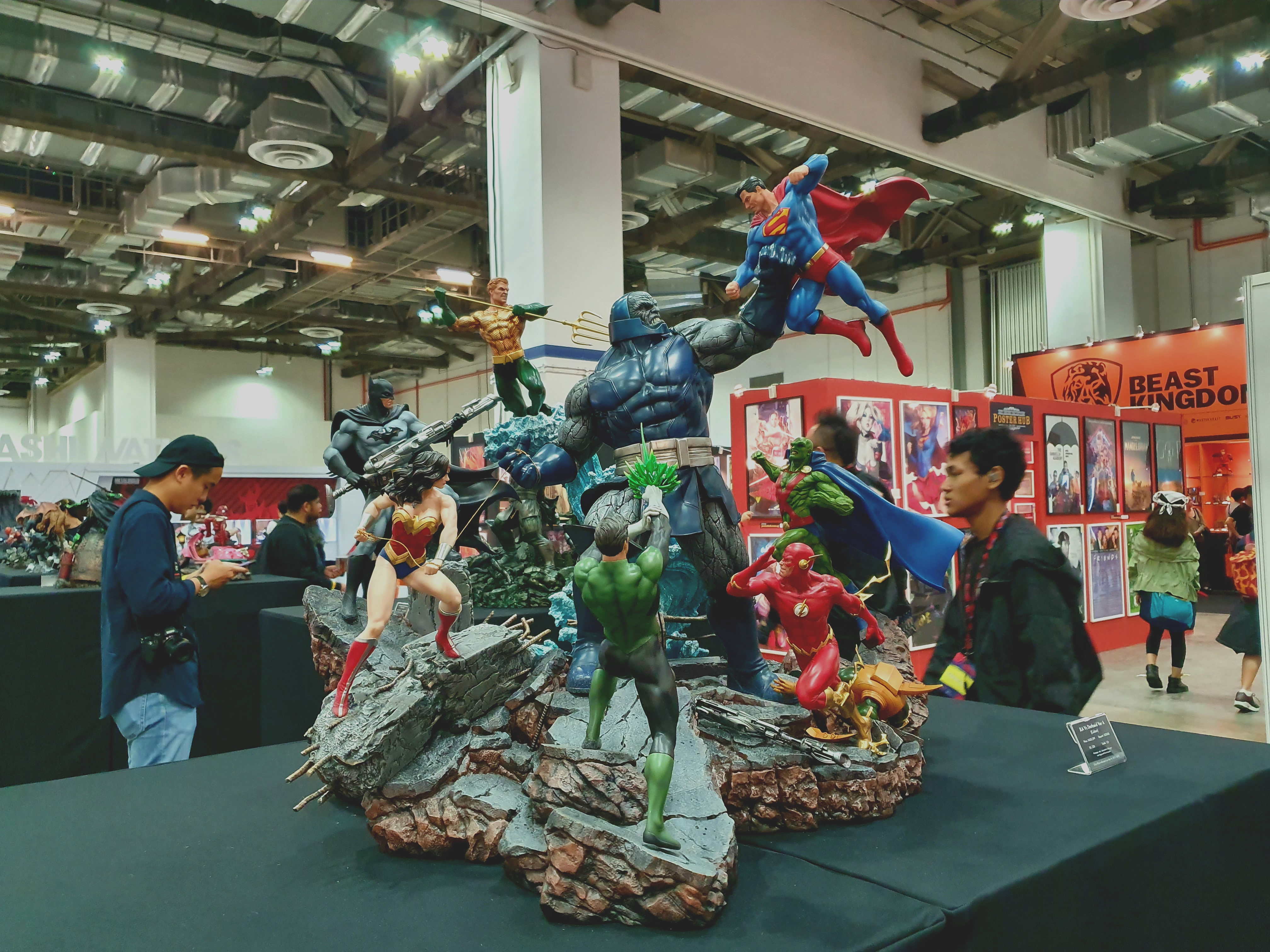 Collectables from XM studios on display at SGCC. /CGTN Photo

Collectables from XM studios on display at SGCC. /CGTN Photo

And what's a comic con, without the limited edition collectibles.

LEGO had its global unveiling of the highly-anticipated 2020 Modular Building Set. A limited commemorative Gold and Silver LEGO numbered coin set was also offered as a gift with certain purchases at the stall.

General Manager at Mighty Jaxx, Melissa Wong, explained, "we did a Sesame Street theme collection. So we have figurines, we are also doing our apparel line, we have t-shirts, socks, caps, and of course cookie monster is the hero of the show."

Not just that, Melissa explained that a single Elmo figurine has been created for SGCC and will be given to one lucky winner chosen through a raffle draw. But there is a catch. To participate, customers would have to spend at least 100 Singapore dollars. 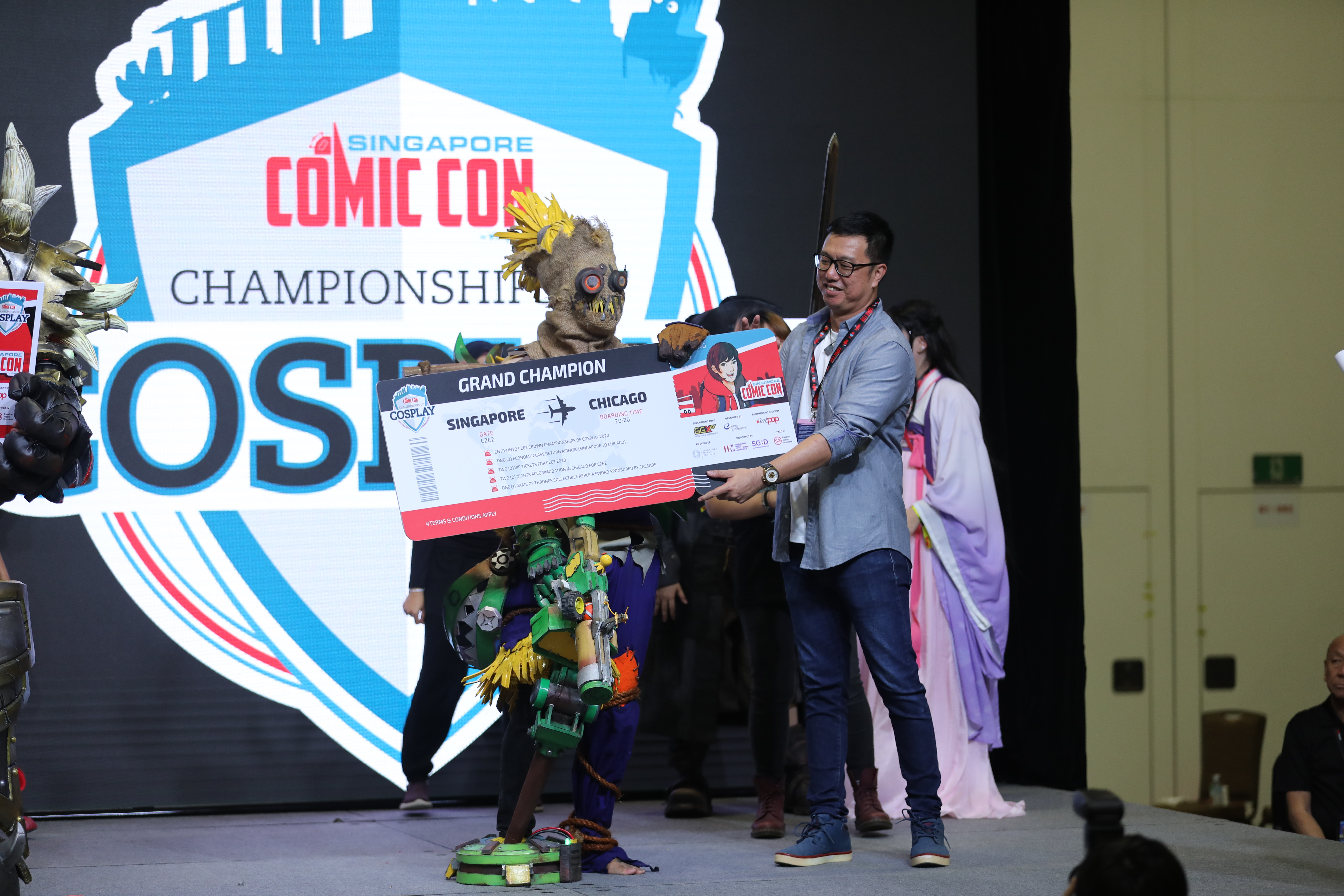 Undoubtedly, the stars of the convention were the cosplayers. One of the main highlights of day two, in fact was the prestigious Champions of Cosplay competition.

After a spectacular display of talent by all competing cosplayers, Danniel Adi Putra was crowned as the overall champion for the Championships of Cosplay 2019. Danniel won himself a trip to represent SGCC at the cosplay competition at Chicago Comic & Entertainment Expo (C2E2) in 2020.

ReallLife couple Bryan and Rebecca, who dressed up as Marvel's Deadpool and Gwenpool, pointed out that "there are a lot more cosplayers" attending than previous years. They saw this as a huge positive for the cosplay scene in Singapore, which is still not as well established as compared to the West.

Chris who dressed up as his childhood idol Captain America, felt relieved that he could showcase his hobby without being judged or stared at.

"At Comic Con, I feel it is much better because people get to dress up as western superheroes and you don't feel really out of place."

Shalley flew down from Malaysia to participate and dress up as her favorite character from the League of Legends. Her hand stitched costume took her a month to make.

Proud of her hobby, Shalley sent out a message to both fellow cosplayers and their naysayers: "Advice for my cos-friends, just have fun, go with it, don't ever give up. If someone puts you down, don't listen to them. "