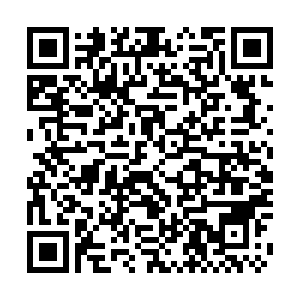 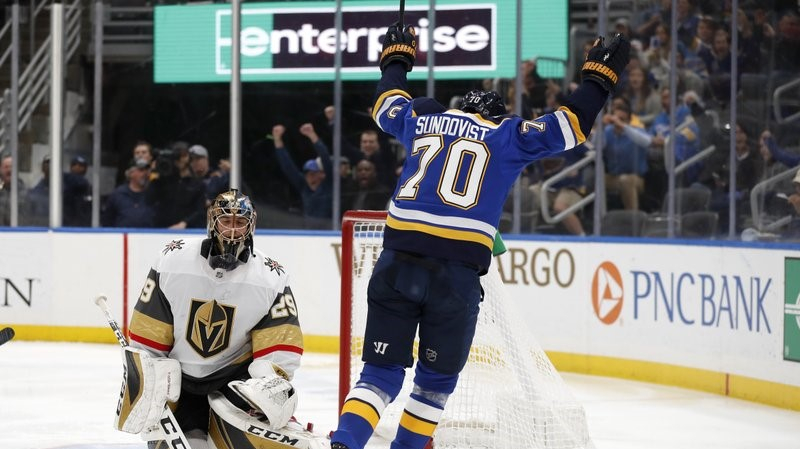 Oskar Sundqvist#70 of the St. Louis Blues celebrates after scoring against Marc-Andre Fleurym goaltender of the Vegas Golden Knights in the game at the Enterprise Center, December 12, 2019. /AP PHoto

Oskar Sundqvist#70 of the St. Louis Blues celebrates after scoring against Marc-Andre Fleurym goaltender of the Vegas Golden Knights in the game at the Enterprise Center, December 12, 2019. /AP PHoto

Oskar Sundqvist picked up right where he left off.

After missing the previous six games with a lower-body injury, Sundqvist had a goal and an assist as the St. Louis Blues beat the Vegas Golden Knights 4-2 on Thursday night.

The 25-year-old center kept up his offensive surge, assisting on the Blues' first goal and scoring their second. Sundqvist had two goals in his last game against Tampa Bay on November 27 before getting hurt.

"I felt good out there," Sundqvist said. "The lungs weren't great. I had to keep the shifts short in the third."

Mackenzie MacEachern, Jaden Schwartz and Robert Thomas also scored for the Blues, who snapped a three-game skid. Jordan Binnington made 27 saves after getting pulled from his previous start against Toronto last Saturday when he allowed four goals on 11 shots.

Max Pacioretty and William Carrier had the goals for the Golden Knights, who lost for the third time in four games. Marc-Andre Fleury stopped 25 shots in his 820th career game, which tied Sean Burke for 14th on the NHL's all-time list.

"Lot of missed chances, but we were loose in the second," coach Gerard Gallant said. "That cost (us) the hockey game."

The Blues took control with two goals in a 39-second span late in the second period.

Schwartz gave the defending Stanley Cup champions a 3-2 lead with 5:07 left in the frame, ripping home a big rebound off a shot by Brayden Schenn. Thomas made it 4-2 moments later, beating Fleury short side on a shot that deflected off his arm.

"I think everyone thought I was going to pass," Thomas said. "I kind of was just waiting, saw him slide off the post a little bit and was able to sneak it by him."

Fleury wanted that one back.

"They put the puck on net," he said. "Had a lot of bodies there and that fourth one, that's on me."

MacEachern gave the Blues a 1-0 lead on a one-timer off Jacob de la Rose's pass at the 4:52 mark of the first period.

Pacioretty tied it 25 seconds later, putting in his own rebound on a breakaway for his second goal in two games.

Carrier's first goal in 14 games gave the Golden Knights a 2-1 lead with 7:32 left in the first. Carrier tucked home a rebound of Nate Schmidt’s shot.

"We played probably 30 minutes of good hockey," Berube said. "Maybe 35, but I'm looking for 60. I'm not trying to be critical up here, but we have to get better."

Sundqvist tied the game for the Blues at 1:34 of the second, deflecting Alex Pietrangelo's shot past Fleury for his ninth of the season.

"It feels like I'm in the right spot a lot of times," Sundqvist said. "At the same time, it's a really good job by the other guys to get the pucks there. Today it was kind of a lucky goal - it was more like a reaction when Petro shot it there."

Other games on Thursday included (home teams in bold):