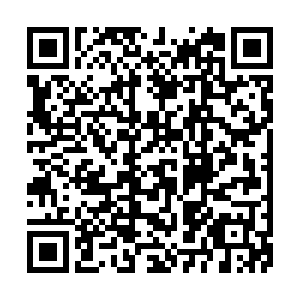 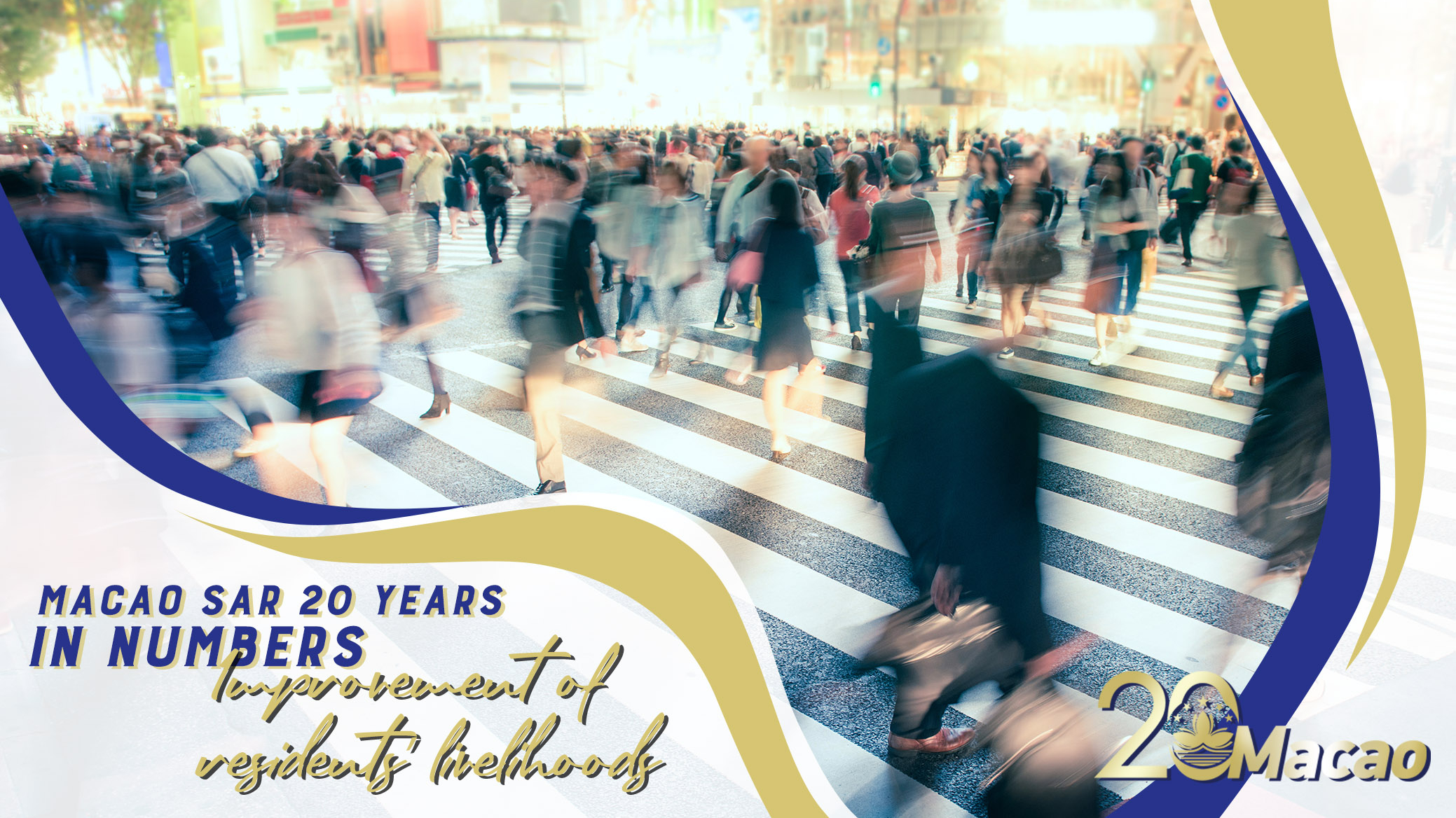 In the past 20 years after Macao Special Administrative Region's (Macao SAR) return to China, with the full efforts from the SAR government in building long-term efficient mechanisms in areas including social welfare, education and health, Macao residents' livelihoods have been greatly improved.

The International Monetary Fund predicted that Macao would top Qatar to become the region with the highest per capita GDP by 2020.
Macao has a dynamic labor market, with the unemployment rate maintained at a low level of under two percent since 2013. 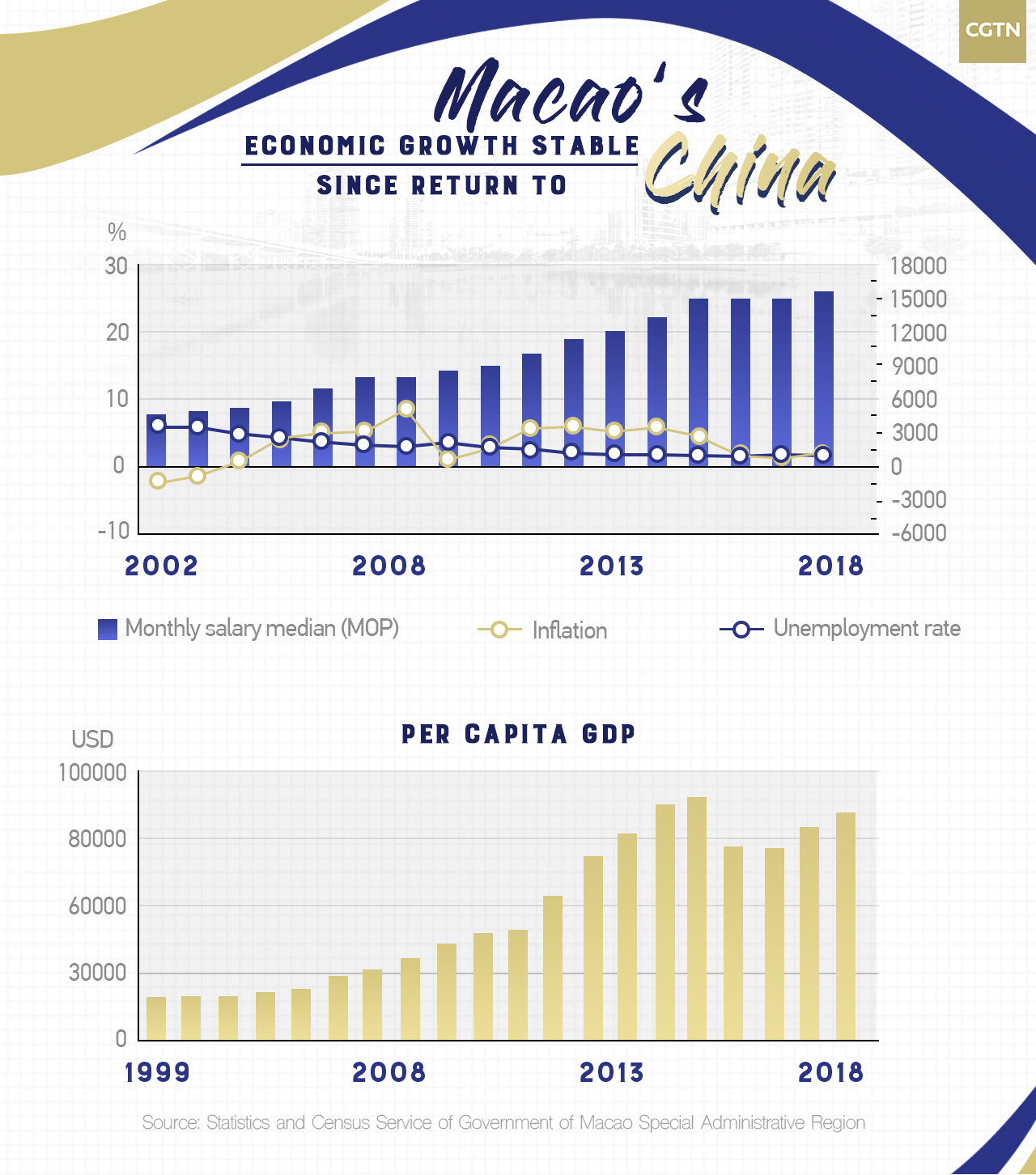 The monthly salary median has surged to 16,000 Macanese patacas per month in the first half of 2018, while it was only 4,672 in the early stage after the reunification.

With a population of over 650,000 and a land area of ​​over 30 square kilometers, Macao is one of the most densely-populated places on the planet. Constructing a livable city is a shared vision of the Macao SAR government and residents.

Residents in Macao can share the results of the economic development of the city. Permanent and non-permanent residents in Macao are entitled to respectively receive 10,000 and 6,000 Macanese patacas in 2019 under the Wealth Partaking Scheme, a cash disbursement policy that has been launched since 2008.

Education is an emphasis of Macao SAR government's Policy Address every fiscal year. Since the 2007/2008 academic year, free education has been extended from 10 years to cover the entire 15-year period of compulsory schooling.

While developing an education, the government has focused on talent cultivation. Despite Macao's small land area, the city houses 10 higher education institutions.

For the past two decades, the government has devoted considerable resources to medical and health care to optimize medical services and various health care facilities.

The government launched an annual medical subsidy program in 2009, giving residents health care voucher of 500 Macanese patacas per year for medical services. The denomination has been raised to 600 Macanese patacas since 2013, and a digitalized voucher was issued in 2018.

Enjoying comprehensive coverage of medical benefits, now all legal residents are entitled to free services at the Health Centers. 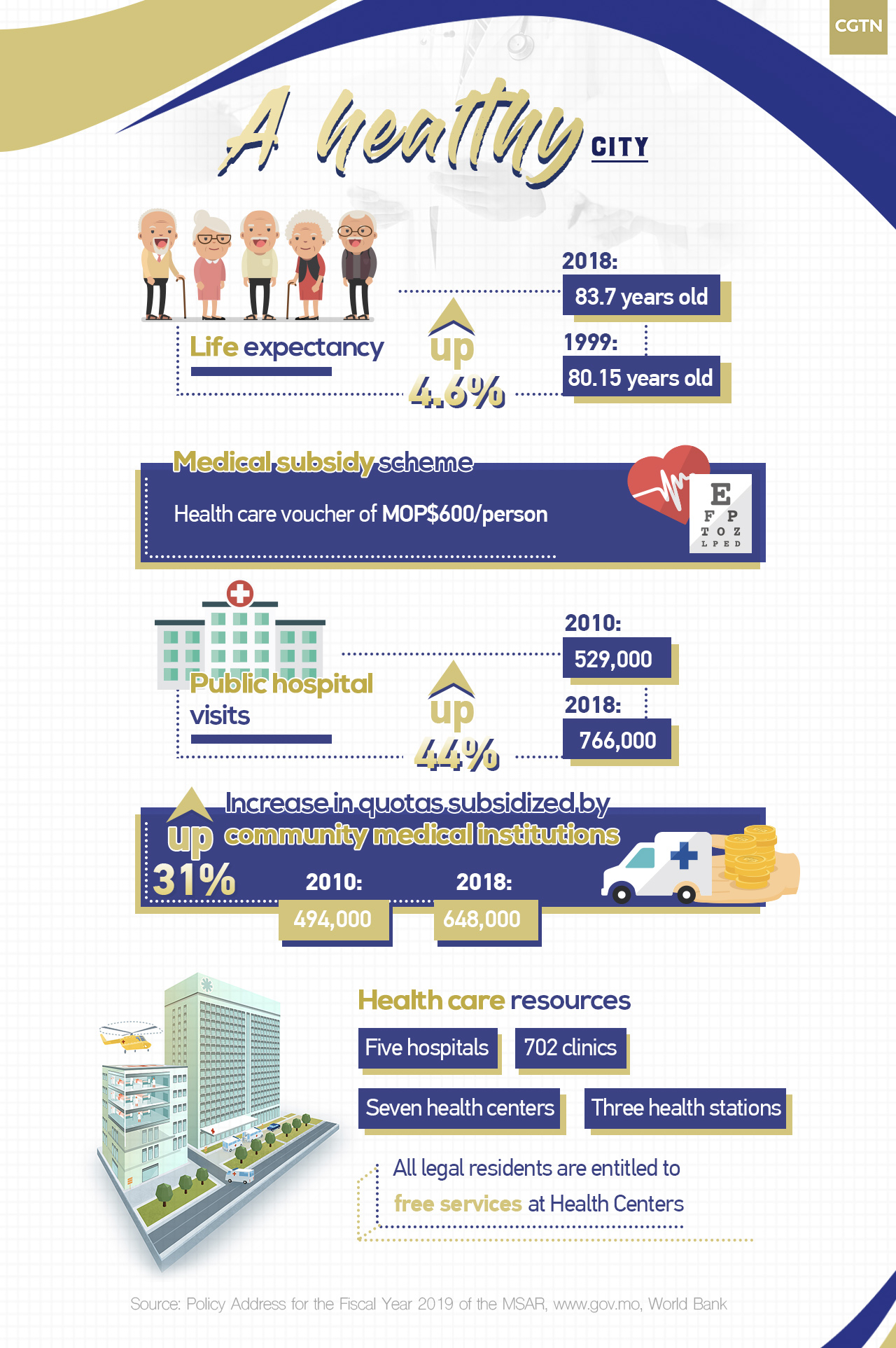 In February, the central government released the blueprint of  the Guangdong-Hong Kong-Macao Greater Bay Area (GBA) outline, aiming to build a dynamic economic region of a cluster of cities that complement each other in people, capital, goods and information.

Being the core city of the GBA, Macao is set to better integrate into future regional development.

The Macao SAR will join hands with its neighbor cities, including Jiangmen, Guangzhou, Zhongshan and Zhuhai to deepen cooperation in livelihoods issues, with focus on fragments such as intercity passenger ticket payment system and border crossing infrastructures.

Read more: Graphics: Macao's economic takeoff over the past 20 years