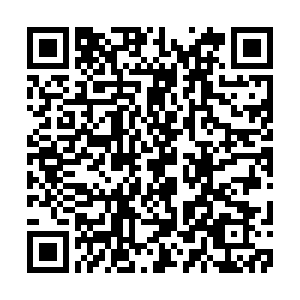 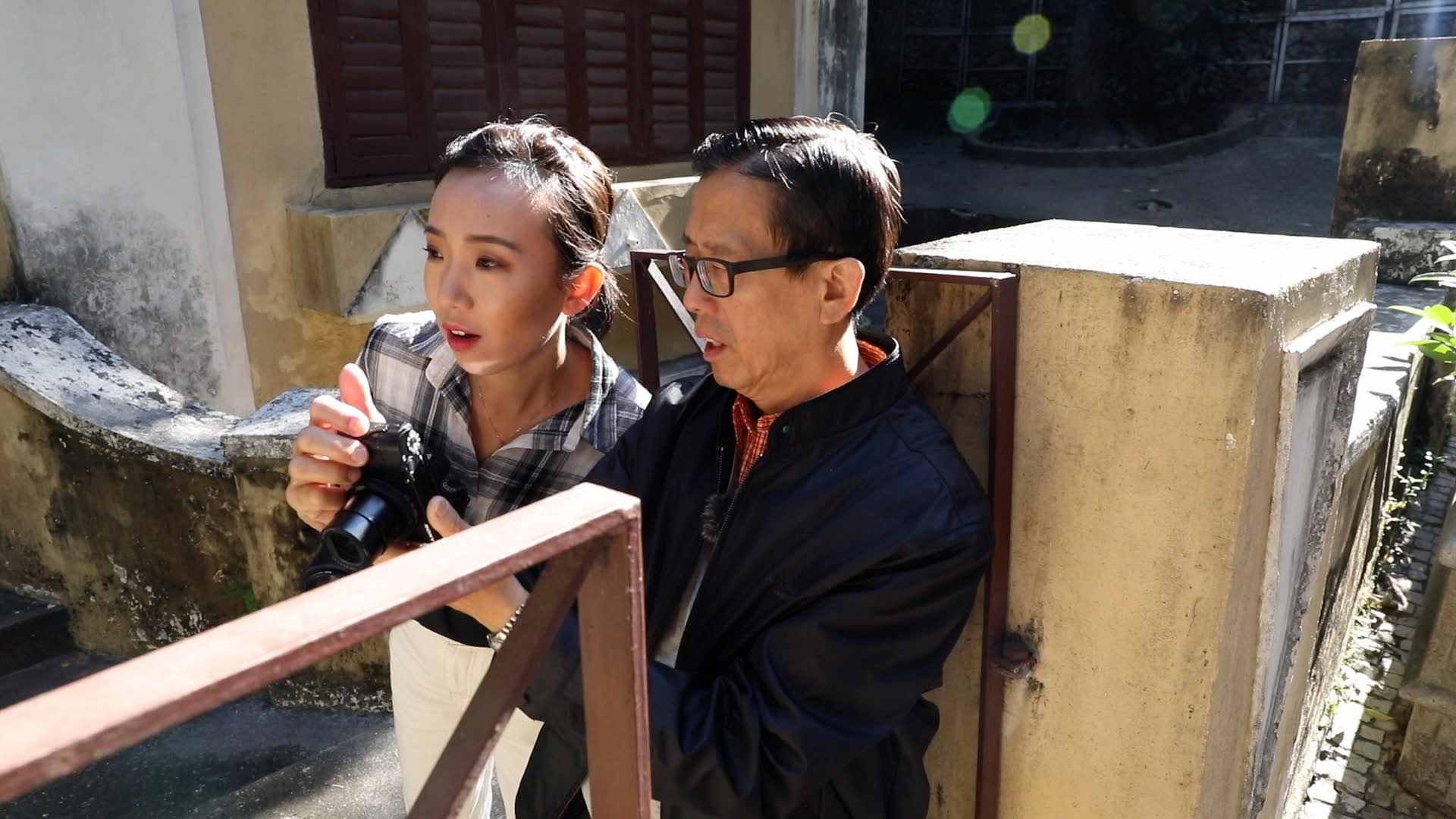 Many people come to the "Vegas of China" for its lavish casinos, luxurious hotels and world-class entertainment, but behind the kitsch and glitz, there's another side of Macao whose appeal has largely been overshadowed by the city's successful gaming industry.

Macao's 300-year history as a Portuguese colony has left it with a unique heritage, and nothing shows it better than the UNCESCO-crowned old city center, where a fusion of European and Chinese architectural gems stand side by side in a seamless blend.

As a shutterbug, I wasn't going to let the opportunity pass me by and I dragged along travel photographer and writer, Ritchie Lek Chi Chan.

It's better to exploit your job to indulge in a little hobby. So on a sunny weekend morning, we showed up at a meeting point called Lilau Square in the heart of Macao, Ritchie with a compact camera, and me with a heavy-duty DLSR to compensate for a lack of knowledge of my subjects. 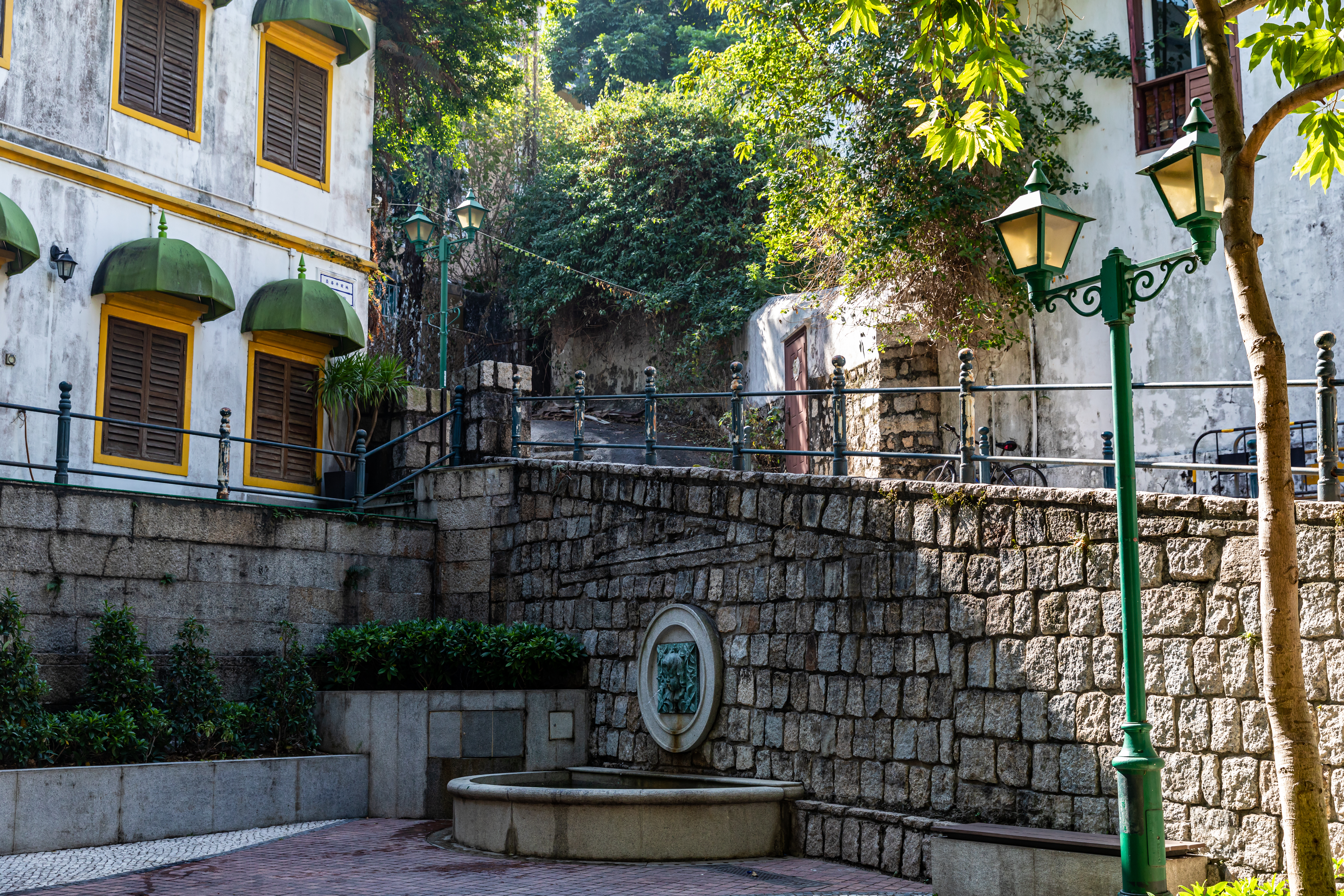 "Lilau" means "mountain spring" in Portuguese. The ground water here used to be the main source of natural spring water in the city. So when the Portuguese arrived, they naturally chose to settle near the water source. So goes the Portuguese saying:

"He who drinks from the waters of Lilau

Their home is in Macao,

And they will always return."

You could easily mistake the neighborhood for Lisbon's Alfama District – houses painted in captivating colors lining narrow, cobblestone alleyways, grandmas sitting in the shade exchanging gossip, a European-style wall fountain gushing out the same water as when the first Portuguese settlers arrived.

Except, as Ritchie pointed out to me, the old Chinese residential buildings just across a narrow slop behind the fountain, unmistakable white walls with black roof tiles.

"Take a step back," he instructed me. Here's what the photograph looks like, and so goes your culture mix: 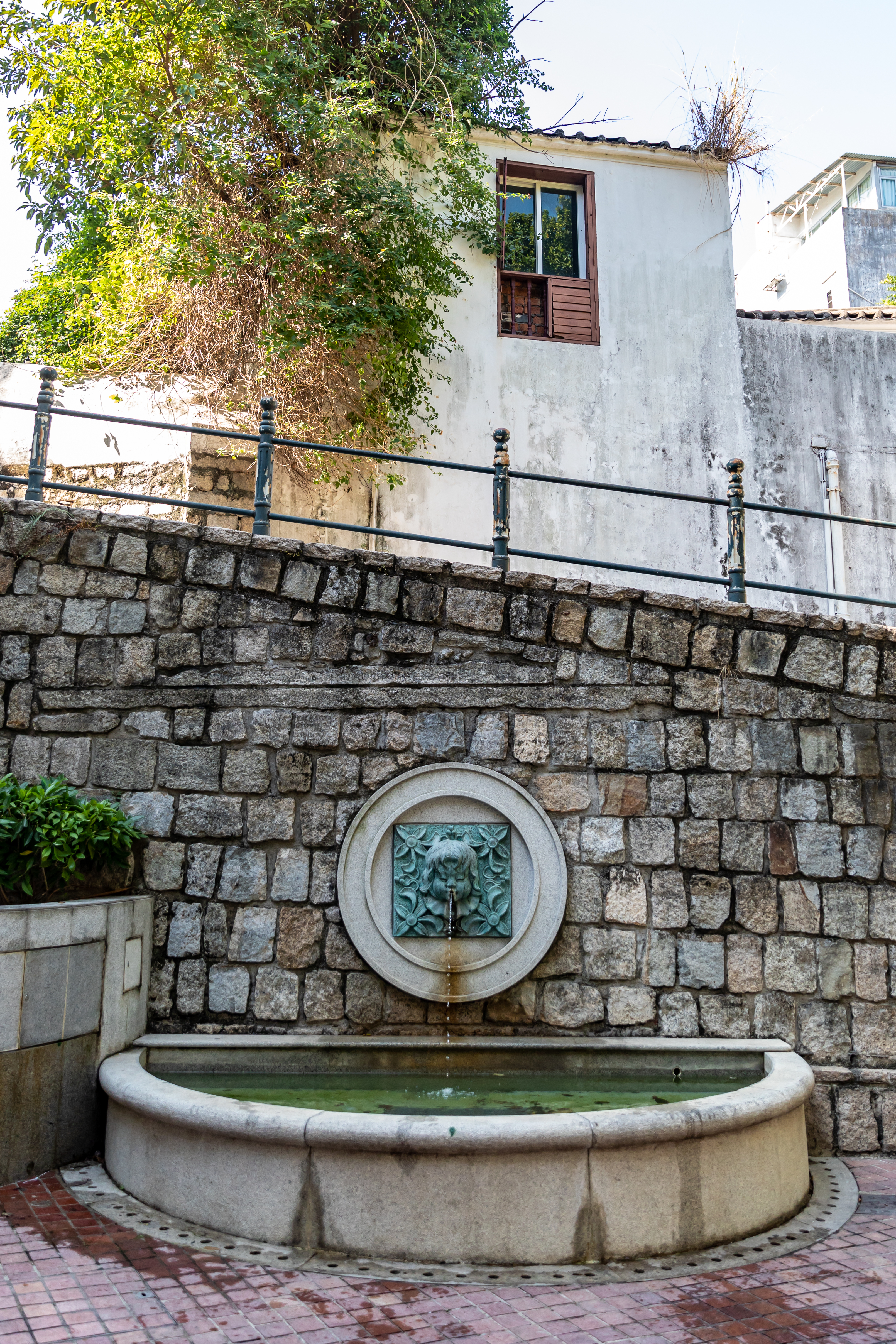 A European-style fountain against the backdrop of a typical Chinese-style residential building in Macao's Lilau Square. /Photo by Tao Yuan

A European-style fountain against the backdrop of a typical Chinese-style residential building in Macao's Lilau Square. /Photo by Tao Yuan

A five minute walk down from the Lilau felt like traveling a world away. At A-Ma Temple, clouds of aromatic smoke rise from incense burners and waft through the perfectly symmetric Ming Dynasty compound.

The temple is dedicated to the Chinese sea goddess, Mazu. "You see," explains Ritchie, "Macao used to be a small fishing village."

"The temple existed before the Portuguese came. So for us, it holds special meaning," says Ritchie. "It represents the history of Macao, and proves Macao has always been part of China." 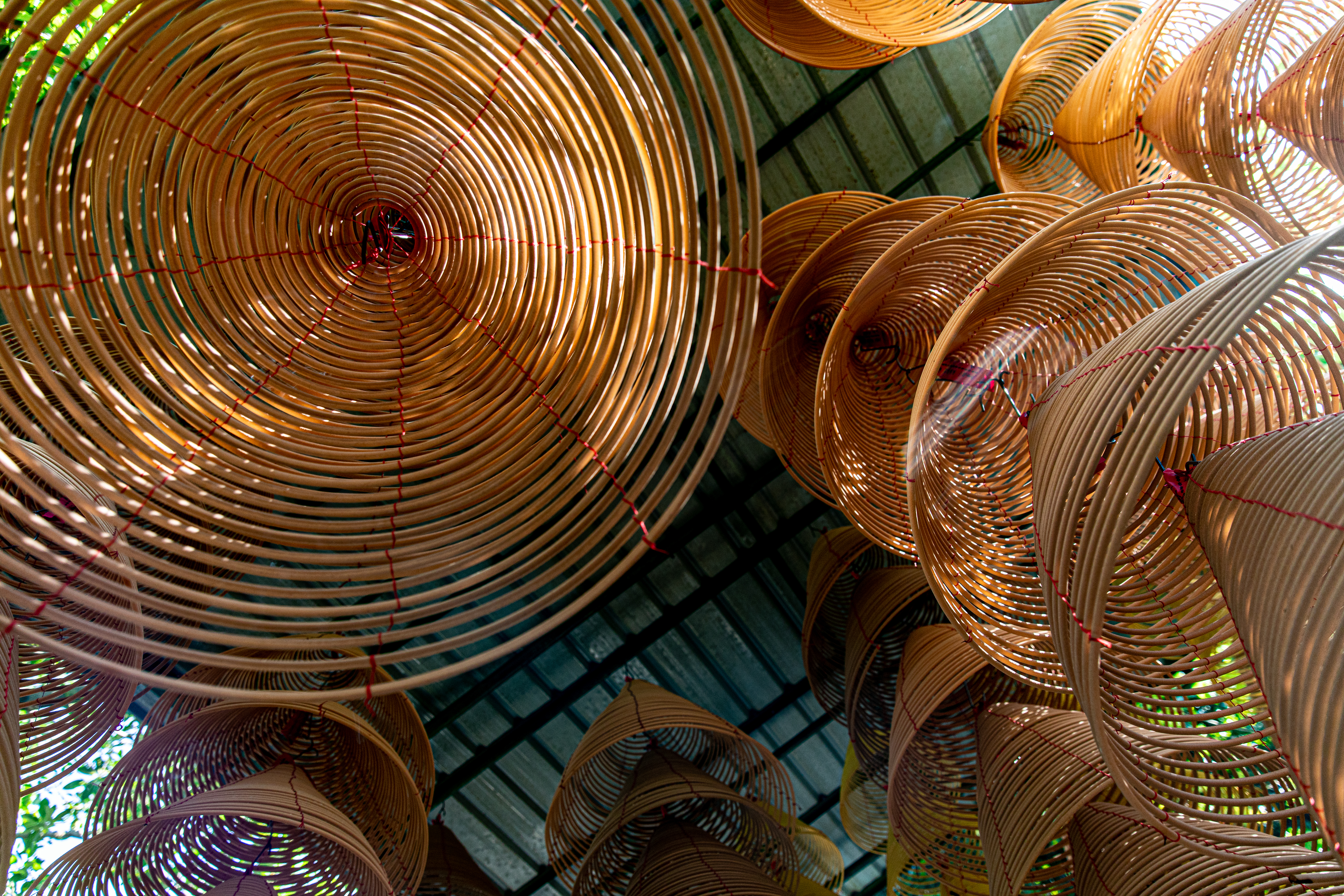 No trip to Macao is complete without visiting (and photographing) the Ruins of Saint Paul's. Macao's most famous landmark is the facade of what was originally the Church of Mater Dei, the largest church in Asia at the time.

The wooden structure was burned down in a fire in 1835, leaving only the stone facade, which to this day, stand as a unique reminder of Macao's colonial past.

To avoid cliche tourist photos, Ritchie took me to the back of the structure. In a small corner down the old city wall, there's a tiny, inconspicuous temple.

Standing just outside the temple, or better yet, squatting down there, you can fit the temple and the church in one frame. With the distortion of the wider lens, it even seems as though the two are striving to meet one another at the top of the frame. 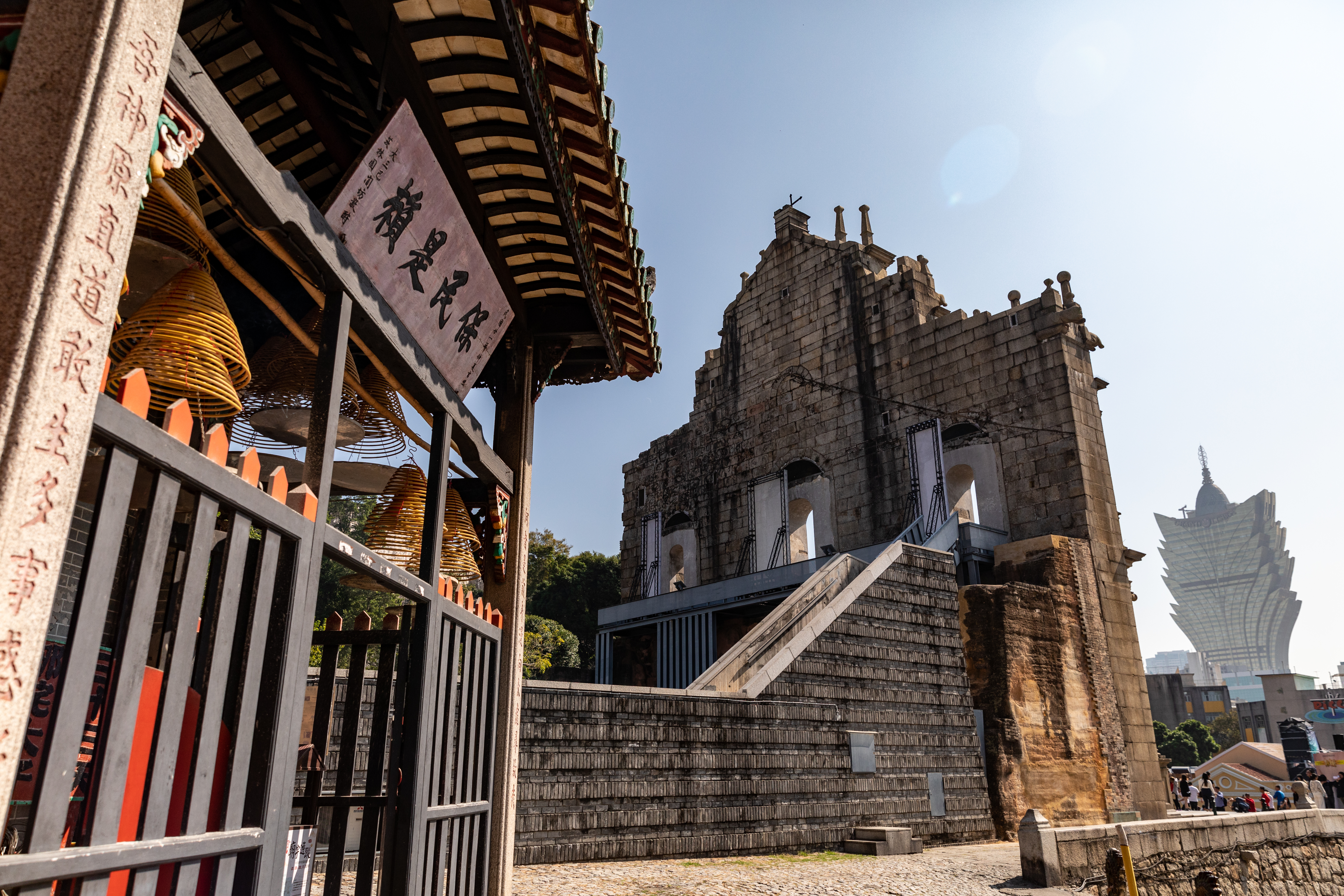 Na Tcha Temple and the Ruins of Saint Paul's in Macao. /Photo by Tao Yuan

Na Tcha Temple and the Ruins of Saint Paul's in Macao. /Photo by Tao Yuan

"Seen in a tiny corner," he added.

It's a mystery how this picture-perfect corner has been missed by perhaps 99 percent of visitors. But this lesser-traveled, quite spot is probably best kept as a secret.

"Every culture and every religion can seem to blend seamlessly in Macao," says Ritchie. "I think it's because the Chinese culture embraces diversity. Same with the Portuguese."

"Or it might has something to do with the water…" he added in a playful tone.