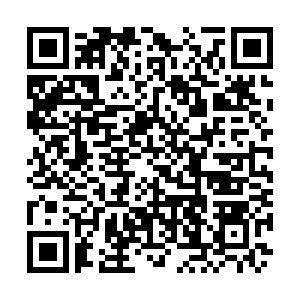 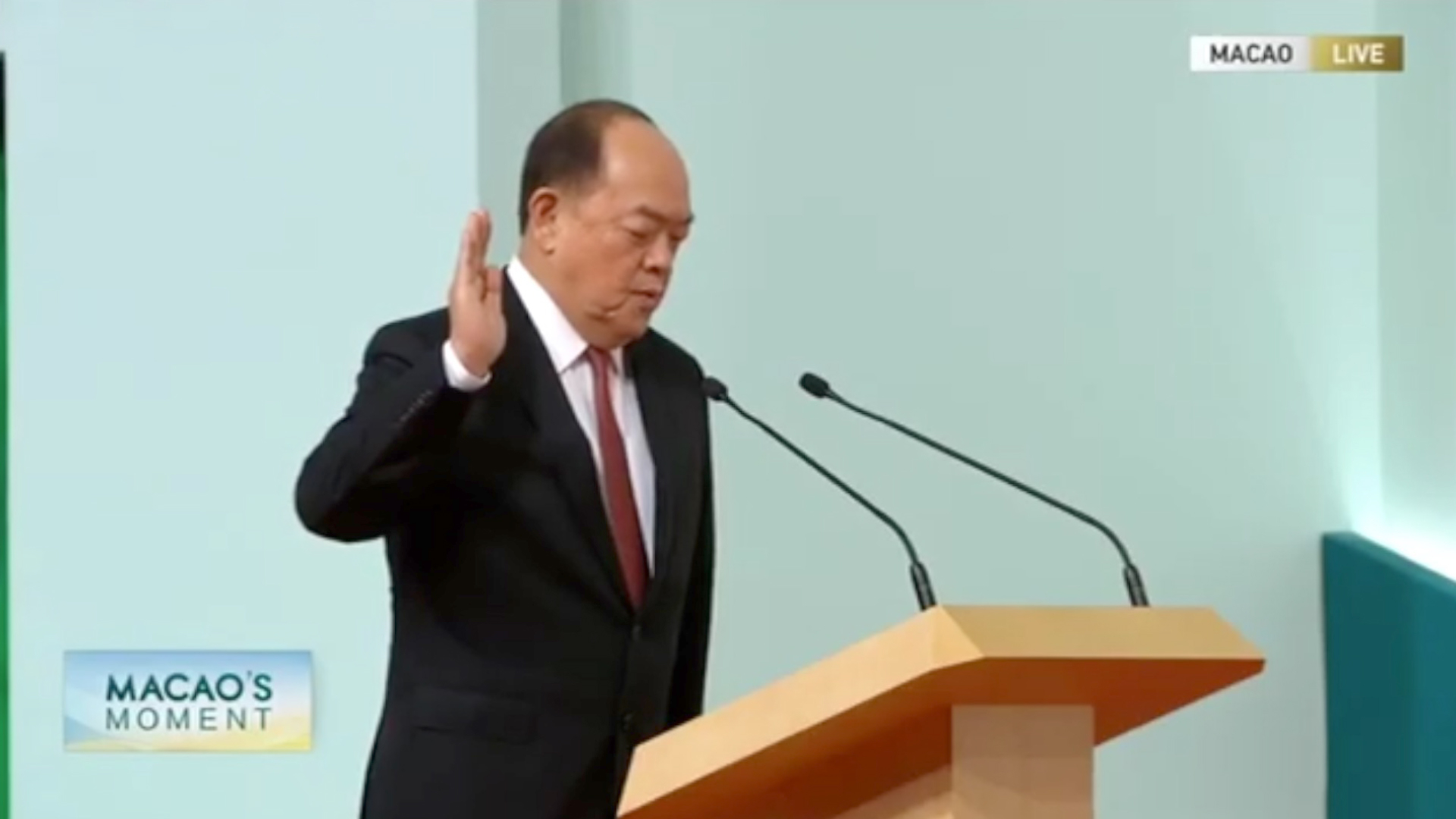 Ho Iat Seng was sworn in Friday morning as the fifth-term chief executive of the Macao Special Administrative Region (SAR), officiated by Chinese President Xi Jinping. He vowed to safeguard national security and sovereignty together with the fifth SAR government and keep implementing the "One Country, Two Systems" principle with Macao characteristics.

Ho took his oath at a meeting celebrating the 20th anniversary of Macao's return to China, where the inauguration ceremony of the fifth-term government of the Macao SAR was held.

Ho, 62, was elected the fifth-term chief executive of the Macao SAR in August. He promised to spare no effort in upholding the principles of "One Country, Two Systems" and "Macao people governing Macao" with "a high degree of autonomy." 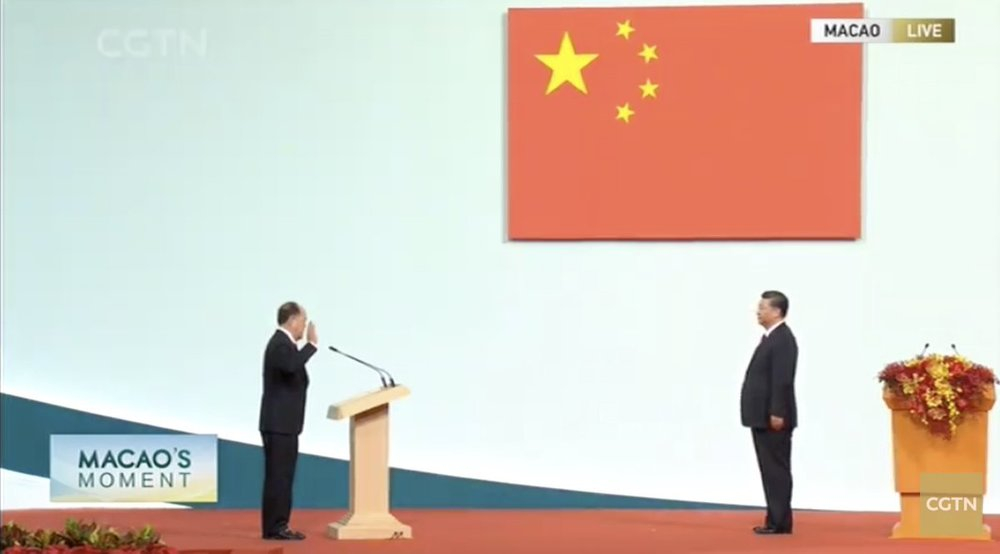 The principal officials and new public procurator-general of the fifth-term Macao SAR government later also took their oaths in front of Xi.

Members of the Executive Council of the Macao SAR were sworn in by Ho.

In his speech, Ho extended welcome and gratitude to President Xi and his wife, Peng Liyuan, and delegates from the central government, on behalf of the new Macao SAR government and people of Macao.

Ho said that he realized that the "great motherland has always been and will forever be Macao's staunchest supporter."

As this year marks the 70th anniversary of the establishment of the People's Republic of China, Macao is proud of the country's marvelous historic achievements and is confident in the country's glorious future, he said. 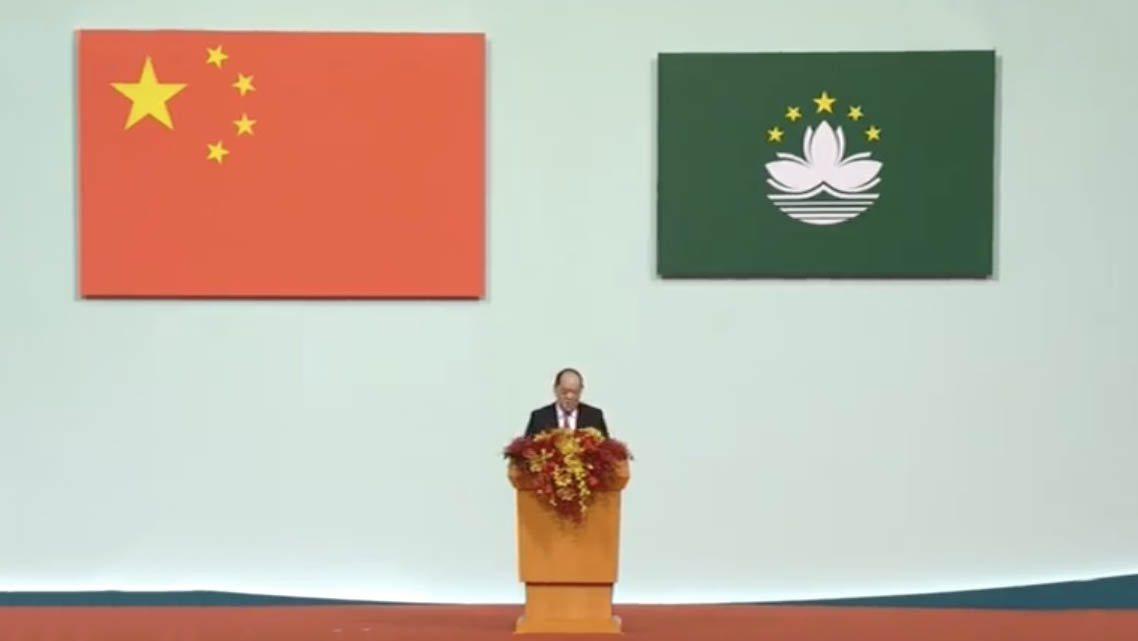 Macao is shining demonstration of 'One Country, Two Systems'

He said Macao implements the principle in strict accordance with the Constitution and the Basic Law to steadfastly uphold national sovereignty and security.

While being honored to be the fifth-term chief executive of the Macao SAR, Ho said he understood that the honor comes with challenging responsibilities. He vowed to repay the support and trust of the central government and the people of Macao with solid achievements.

To further cultivate a "One Country, Two Systems" principle with Macao characteristics, Ho said Macao will accelerate public administration reform, strengthen Macao SAR's governance system and capacity, continue to build a rich and vibrant tourism industry, nurture sectors and industries such as traditional Chinese medicine, and secure the distribution of resources into areas including healthcare, education and social welfare.

He stressed the necessity to disseminate distinctive Chinese culture, promote diversified cultural collaboration and innovative cultural education, and the need for civil servants to undertake national studies and invigorate their nationalistic sentiments and fortify young people's sense of patriotism.

"In this way, we pass down to our descendants the patriotic reverence for our country and for Macao so that the 'One Country, Two systems' cause can endure and survive," he said.

Ho said policies such as the Belt and Road Initiative and those on the Guangdong-Hong Kong-Macao Greater Bay Area provide crucial opportunities for the development of Macao, and he believes that with the support and guidance of the central government, and with Macao grasping the foundation, opportunities and advantages, Macao's future will be bright and brilliant.