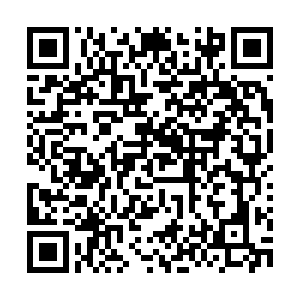 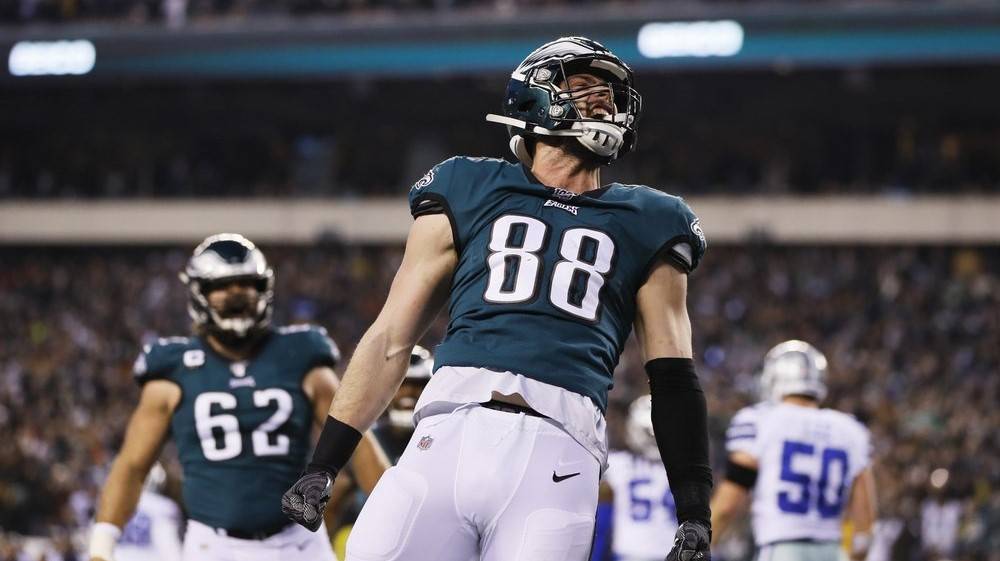 Dallas Goedert #88 of the Philadelphia Eagles celebrates after scoring a touchdown in the game against the Dallas Cowboys at Lincoln Financial Field, Philadelphia, Pennsylvania, December 22, 2019. /AP Photo

Dallas Goedert #88 of the Philadelphia Eagles celebrates after scoring a touchdown in the game against the Dallas Cowboys at Lincoln Financial Field, Philadelphia, Pennsylvania, December 22, 2019. /AP Photo

Carson Wentz ran off the field with his arms raised in triumph, a defining victory for a criticized QB that led an Eagles team limping toward the finish to first in the NFC East.

The wins that got away, now sealed in crunch time.

"You can see the sense of belief that each of these guys have," Wentz said.

Believe this, the Eagles need one more win to go from 5-7 to division champs.

Eagles cornerback Sidney Jones broke up Dak Prescott's fourth-down pass to wide receiver Michael Gallup in the end zone with 1:15 left in the game, and Philadelphia denied Dallas a division crown in a 17-9 win on Sunday.

"Game on the line, you know you gotta make a stop and it's time to rise," Jones said. "When we get those plays, we're going to make them."

Cowboys owner Jerry Jones left his suite with time left on the clock – and perhaps with time running out on Dallas coach Jason Garrett. The difference between a division title and missing the playoffs could seal Garrett's fate in Dallas.

"We all expected to leave here as NFC East champs," Jones said. "We're not."

Yes, it's been an ugly season for the division. But the Eagles won't care about records if they're hosting a NFC wild-card game.

"I guess Jason Garrett has to go take an Uber home," Eagles defensive end Brandon Graham yelled as he walked into the locker room.

Playing with a sore right shoulder, Prescott attacked the Eagles cornerbacks on the final drive and had Dallas in position to possibly tie the game until Sidney Jones made the clutch stop.

"I had an opportunity, I just didn't make the play," Prescott said.

Wentz was 31 for 40 for 319 yards and a touchdown, and Miles Saunders ran for a score to keep the Eagles' playoff hopes alive.

Prescott finished 25 for 44 for 265 yards. Two-time rushing champion Ezekiel Elliott, who had averaged 114.8 yards rushing in five games against the Eagles, was held to 47 yards.

"We all have to own it," Garrett said. "Unfortunately, we don't control our destiny anymore. But we control our opportunity next week at Washington."

Wentz gave the Eagles much needed breathing room when he hit former college quarterback Greg Ward for 24 yards and Miles Sanders scored on a 1-yard run on the final play of the third quarter for a 17-3 lead.

This was the game Wentz needed to win, his spirit growing after the Eagles rallied on the final drive in two straight weeks to beat the Giants and Redskins and thrust themselves back into the playoff picture. He rallied the Eagles with a pep talk in the tunnel before they hit the field for perhaps the biggest game of the 26-year-old QB's career.

"We are built for this moment," Wentz said. "Play with so much confidence, so much swagger, that everyone in the stadium can feel you."

Perhaps fueled by the emotional edict, Wentz came out connecting on almost every pass, and a maligned wide receiver group that suffered a season-long case of the drops suddenly made plays.

Wentz hit JJ Arcega-Whiteside – whose late-game drop cost them in a loss against Detroit – for 27 yards on the first play on a drive that ended with Jake Elliott's 36-yard field goal.

He ended the second drive with an 6-yard TD pass to Dallas Goedert that had Eagles fans going wild. The Linc was rocking, as Wentz started 9 for 11 for 107 yards and a touchdown.

"That playoff atmosphere, you can't beat it," Wentz said.

The Eagles couldn't keep it going, stymied in part by a questionable call from coach Doug Pederson. Pederson called a timeout on a fourth-and-1 on the Dallas 33-yard line, thought about the call, and drew up a pass play out of the shotgun that was incomplete.

Dallas' Kai Forbath kicked field goals of 49 and 32 yards to keep the score a manageable 10-6 at halftime.

Pederson had Elliott try a 55-yarder early in the fourth that was no good and gave Dallas a short field that led to Forbath's 49-yarder that made it 17-9.

"We're going to be rooting for another team hoping that we get a chance," said Prescott, "That's not a position anyone wants to be in, depending on someone else."