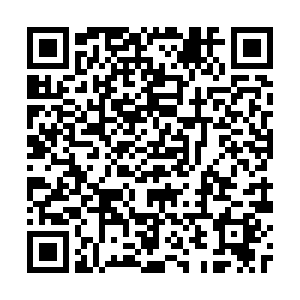 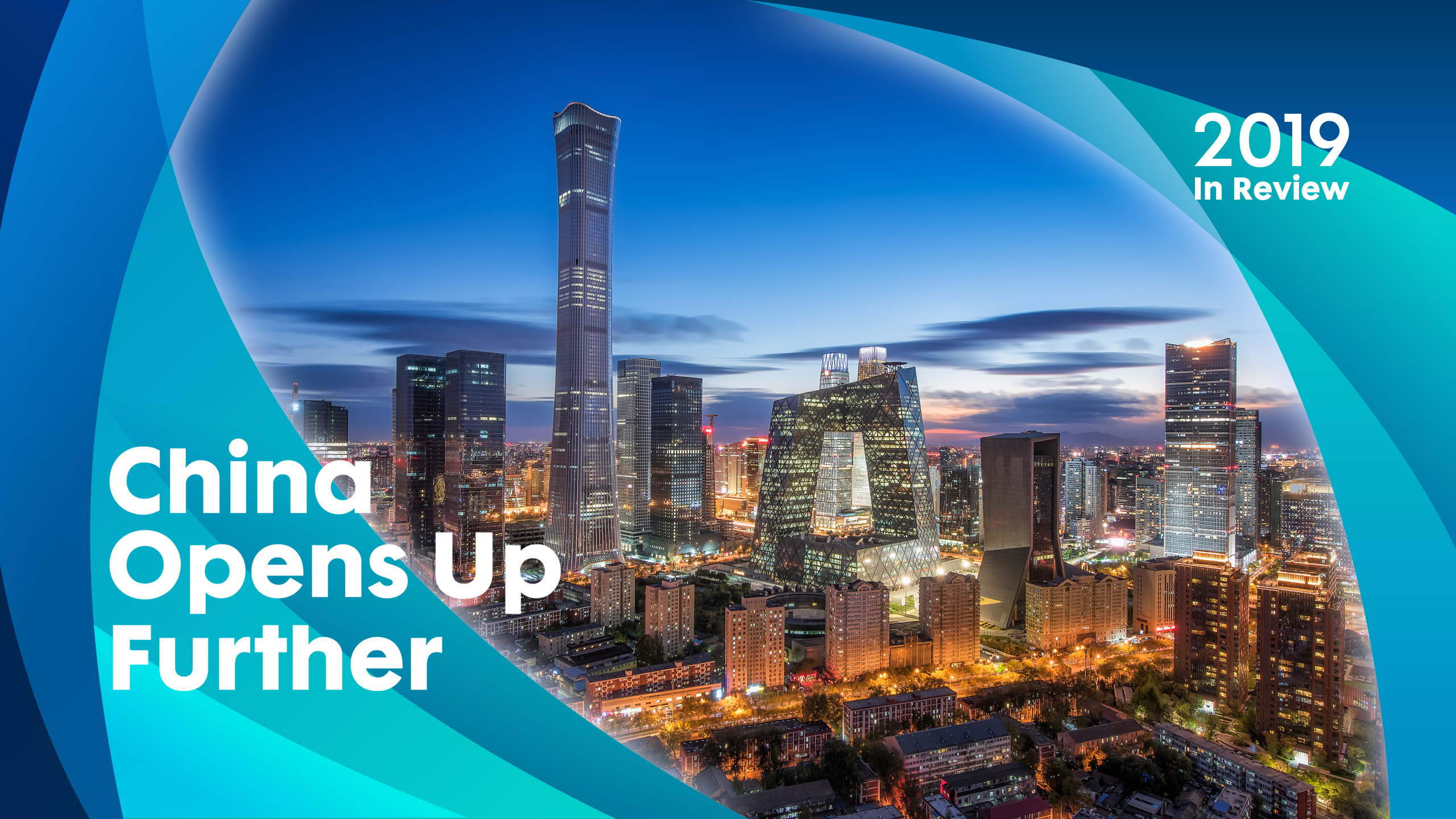 China's financial sector has been undergoing accelerating transformation towards further opening-up in line with the country's plan. It now provides foreign financial institutions with improved operational accessibility thanks to financial reforms carried out by the Chinese government in recent years.

As planned and committed, the Chinese government rolled out a series of policies in 2019 to reform the financial sector in full scale.

The removal of foreign ownership caps was realized in banks and financial assets management in May 2018. 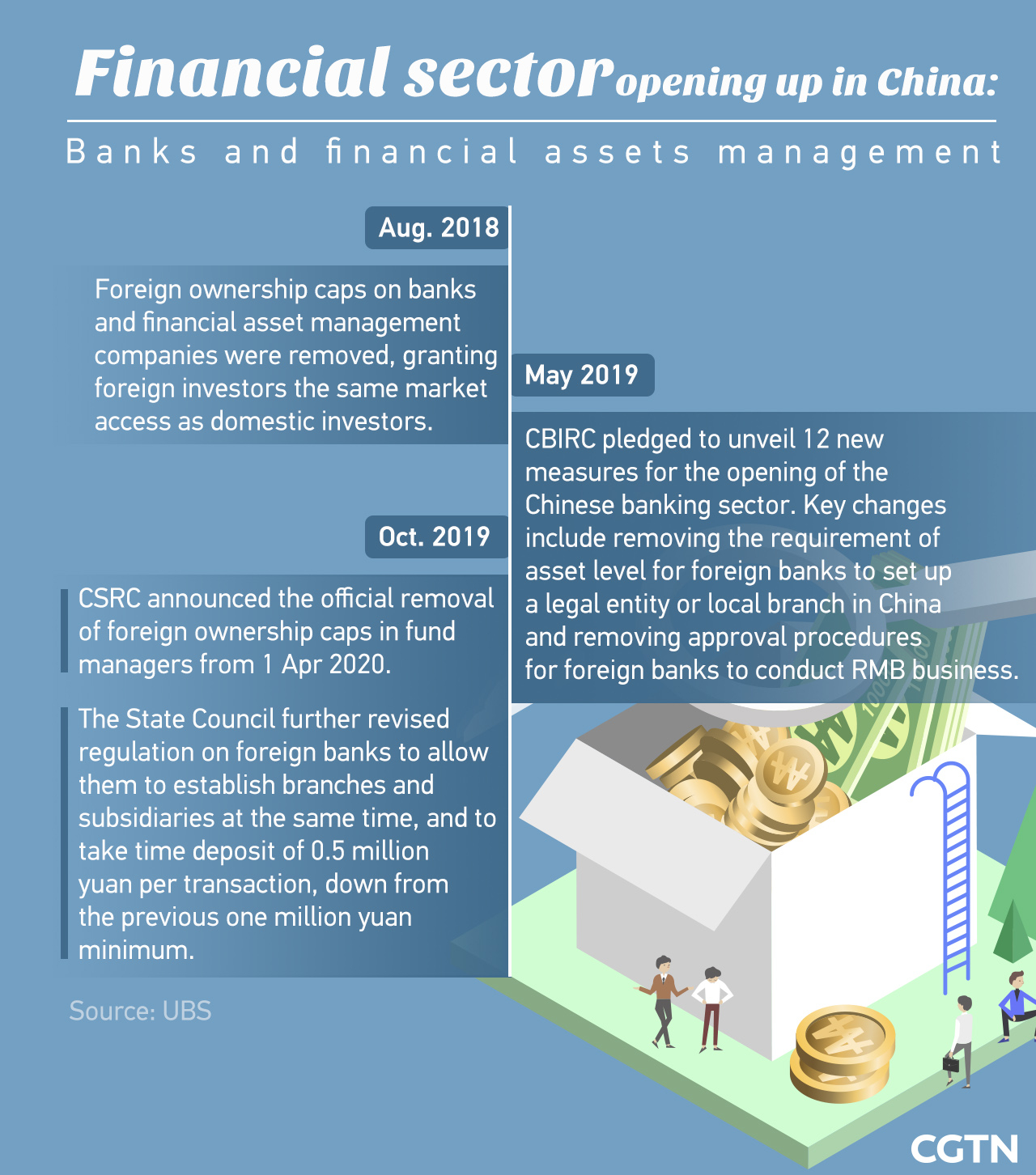 As the restrictions were removed, foreign banks and assets management firms started to dive deeper into the Chinese financial market.

"Even when the global economy fluctuates and affects investment income, more and more of our customers are still willing to invest in China, and they say, why not invest more," Xinhua cited Geoffrey Yu, head of U.K. investment office at UBS Wealth Management, as saying. "The confidence comes from customers' optimism about China's economic prospects."

Yu said that an open China is beneficial for both Chinese and foreign companies.

This year, more foreign financial institutions joined the trend in increasing their stake in the Chinese market. Bank of Beijing and ING Bank announced they are setting up a joint venture in March, marking the first foreign-controlled bank.

Following that, Morgan Stanley bought an additional 5.5 percent equity in its China mutual fund joint venture, becoming the top shareholder of the entity.

The achievements in the equity and bond market have also reflected the improvement made by China's financial sector opening-up.

Following the expansion of the daily trading quota of Mainland-Hong Kong Stock Connect in May 2018, the Shanghai-London Stock Connect was launched in June 2019, enabling companies and investors on each side to trade on the other's market.

China's A-shares joined some of the world's most widely tracked benchmark indexes. They were included in the MSCI EM index in June 2018, with the initial inclusion factor of 2.5 percent, which was raised to 20 percent in November 2019. FTSE Russell also completed its phase one inclusion of A-shares and started phase two in September this year. 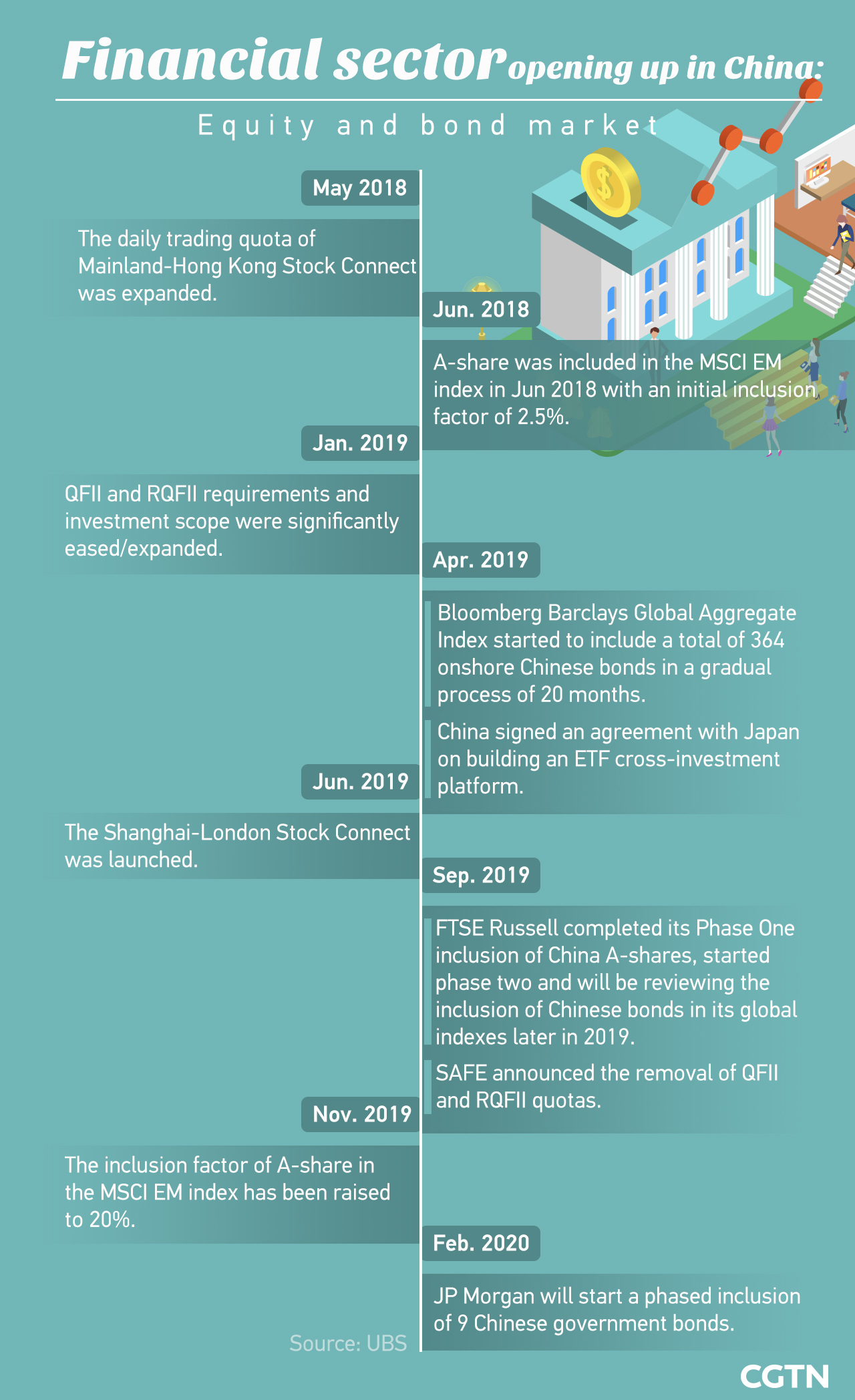 As a gesture that would further open China's capital markets to the world, the State Administration of Foreign Exchange (SAFE) in September said it would remove the quota limits on the qualified foreign institutional investors (QFII) scheme and the RMB qualified foreign institutional investor (RQFII) program. The former lets foreign funds invest in onshore yuan-denominated A-shares, while the latter gives investors access to offshore yuan to buy mainland-traded stocks. 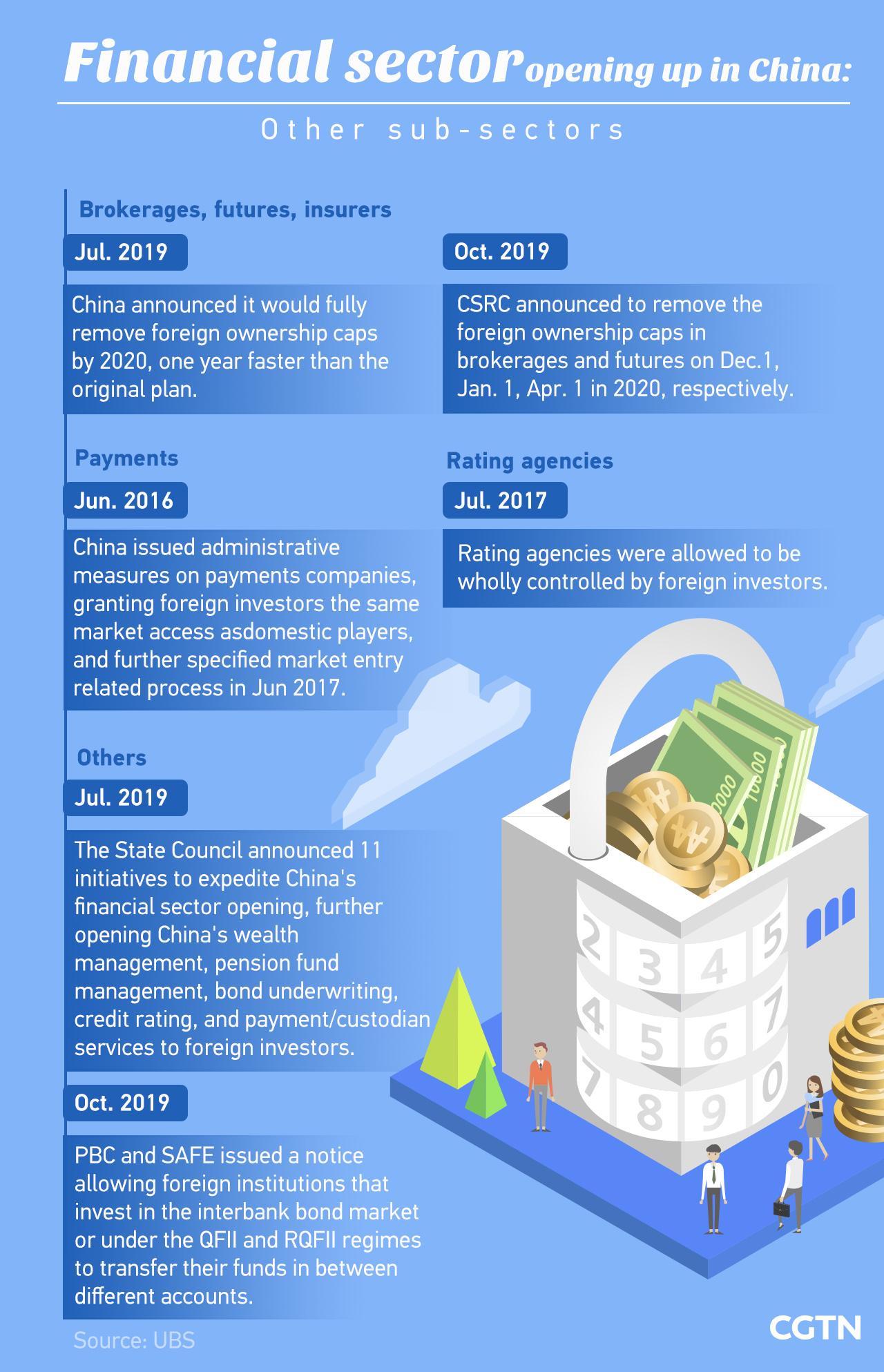 Last year, China announced that foreign investors will be able to own up to a 51 percent stake in securities firms. Previously, foreign ownership was limited to 49 percent.

In July, the State Council released 11 measures to further open up the financial sector, saying the country will scrap foreign ownership limits of securities firms, fund firms, life insurers, and futures firms in 2020, one year faster than planned.

Encouraged by policies opening up the insurance sector, top insurance companies have made efforts in raising their stake in the world's second-largest insurance market with total premiums reaching 575 billion U.S. dollars.

A total of 12 foreign insurance companies invested an additional 6.43 billion yuan into the Chinese market.

In May, ICBC-AXA Asset Management Co. opened, becoming the nation's first joint venture insurance asset management company that has been approved since the rapid opening of the insurance industry.