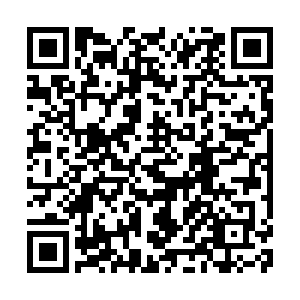 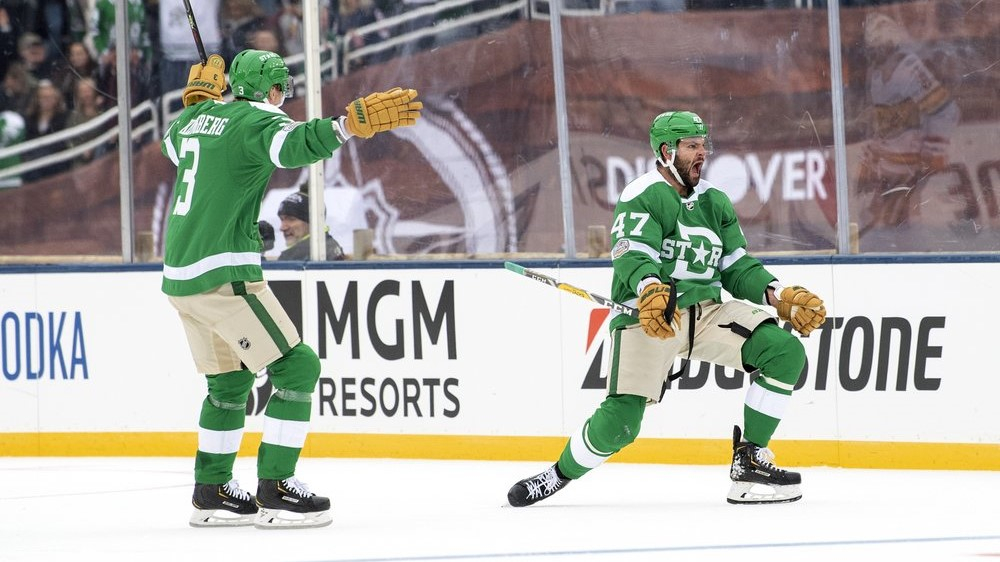 Alexander Radulov #47 and John Klingberg #3 of the Dallas Star celebrate after scoring a goal in the NHL Winter Classic games at the Cotton Bowl Stadium in Dallas, Texas, January 1, 2020. /AP Photo

Alexander Radulov #47 and John Klingberg #3 of the Dallas Star celebrate after scoring a goal in the NHL Winter Classic games at the Cotton Bowl Stadium in Dallas, Texas, January 1, 2020. /AP Photo

Dallas Stars interim coach Rick Bowness had just seen a very similar comeback by his team, though the surroundings for this one were drastically different.

While pigs raced during timeouts next to the outdoor rink, which was built in the middle of a historic football stadium and framed to appear as if it was under an oversized ranch entry, the Stars scored four goals in a span of just under eight minutes in a 4-2 win Wednesday over the Nashville Predators in an NHL Winter Classic that felt like a state fair.

Well, it was played at the site of the annual State Fair of Texas, with the rides and games on the midway open just outside Cotton Bowl Stadium known for hosting big football games.

"Let's look at it from two sets of eyes. From a coaching perspective, we won the game. We battled back. We survived those early penalties and the guys kept battling and believing and doing what was necessary to get us back in the game," Bowness said.

"From a fan's perspective, that was great hockey," he said. "If I was out there watching that game and I was watching us on television, that was an awesome game. The whole thing was awesome."

Alexander Radulov scored the tiebreaking goal on a one-timer with just under 15 minutes left and Andrej Sekera quickly added another goal for the Stars, who were down 2-0 after an extended Nashville power play in the opening minutes when Dallas forward Corey Perry got a game misconduct and was ejected for an elbow to the head of defenseman Ryan Ellis.

"It was an awkward play. It was very unintentional," Perry said after the game. "I didn't mean to do it. I hope he's OK."

Dallas reached the midpoint of its 82-game regular season with its third win in a row and in third place in the Western Conference. The Stars also overcame a 2-0 deficit in their previous game, with four goals in the third period of a 4-2 win at Arizona on Sunday.

Nashville has lost three in a row, and is 11th in the West after making the playoffs last season – and losing in a six-game, first-round series against Dallas.

"You're involved in a game like this and you want a different outcome so that you can really take the day in for what it's worth," Predators coach Peter Laviolette said. "So we sit here on the wrong side of it, makes it a little more difficult for us."

Dallas got its first goal with 1:08 left in the second period, when Jason Dickinson skated around the back of the net and passed across the front of goalie Pekka Rinne to Blake Comeau for the shot that made it 2-1. The Stars then scored three goals in a short span to start the third period before 85,630 at Cotton Bowl Stadium in Dallas, the second-largest crowd to attend an NHL game.

"It was awesome. You don't really know what to expect when you walk out for the start of the game, but the atmosphere, the fans, everything they had going on with the fireworks, the flyover, everything, was just awesome," Comeau said. "It was nice to have a Texas feel."

Stars center Tyler Seguin, voted to the All-Star team this week, said when Radulov scored, it was the loudest cheers he had ever heard during a game.

Radulov scored from the right circle on a power play, and Mattias Janmark had a goal and an assist in the third. John Klingberg assisted on both power-play goals to start the third before Sekera's first goal in nearly three years.

The Predators led 2-0 after Matt Duchene scored a goal and assisted on another by Dante Fabbro after Perry's penalty less than three minutes into the game.

Ellis was down on the ice for a short time, before being helped off the ice. He was then taken to the locker room on a motorized cart and never returned.

The hit by Perry came right after Ellis had gotten the puck in front of the blue line. Officials issued the game misconduct penalty after reviewing replay.

After another Dallas penalty created a 5-on-3, Duchene's ninth goal put the Predators up 1-0. Time was running out on the five-minute major against Perry when Duchene assisted on Fabbro's fourth goal.