2020 a make or break year for Trump
By Claudine Housen 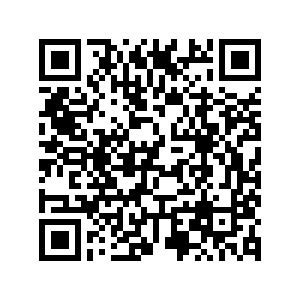 Famous American rapper The Notorious B.I.G once spoke about "Mo' Money, Mo' Problems," but for U.S. President Donald Trump, it might be "new year, mo' problems." While people across the world might still be in high spirits after ringing in 2020, one very big question looms ahead of him. Is this the year he wins a second term, or is it the year he loses the most important job he's ever had as "leader of the free world"?

Threatened with impeachment almost from day one, Trump had impeachment claims laid against him last year. On December 13, 2019, the United States House Judiciary Committee rendered two votes of 27-13 to pass two articles of impeachment and enter the next leg of the contentious journey to removing the 45th president of the United States, Donald J. Trump, from office. But shortly after that, House Speaker Nancy Pelosi announced that she would be holding off sending the impeachment articles to the Senate until Mitch McConnell agrees to the parameters the Democrats have asked for.

It is not the first time that a U.S. president has been impeached, but this attempt could go down in the history books as one of the most partisan and contentious proceedings ever with punches thrown from both sides of the aisle. To date, no sitting president has been removed from office via impeachment, but only time will tell whether Trump will become the first.

Just in case you were busy celebrating and need a refresher, here is CGTN's explainer to quickly catch you up on the important points. 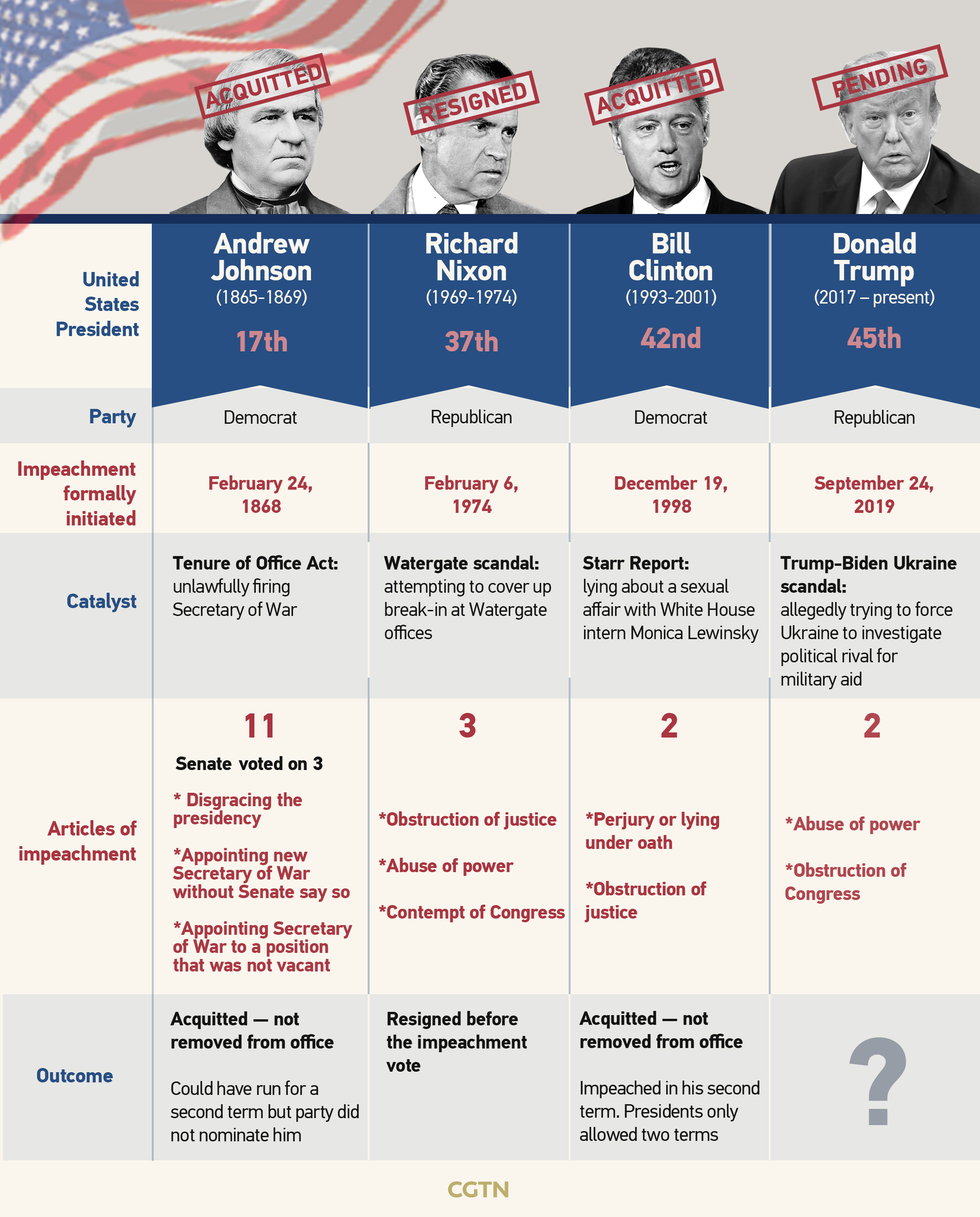 Q: What does impeachment mean?

A: Impeachment is a constitutional process to remove a high-ranking official, such as the U.S. president or a judge from office.

Author Michael J. Gerhard defined it best when he said, "Impeachment is a last resort for holding high-ranking officials accountable for serious misconduct when other mechanisms fail or are not available."

The President, Vice President and all civil Officers of the United States, shall be removed from Office on Impeachment
-  U.S. Constitution Article II Section 4

Q: What are the grounds for impeachment?

A: As stipulated in the U.S. Constitution, a high-ranking official, such as a president, can be impeached for "treason, bribery or high crimes and misdemeanors."

The President, Vice President and all civil Officers of the United States, shall be removed from Office on Impeachment for, and Conviction of, Treason, Bribery, or other high Crimes and Misdemeanors.
-  U.S. Constitution Article II Section 4

Q: What is the U.S. Constitution, and why is it so powerful?

A: "The Constitution of the United States of America is the supreme law of the United States." It protects the rights and freedoms of the American people and puts boundaries up for those who might wish to misuse the power granted to them by the people.

The Constitution of the United States of America is the supreme law of the United States. Empowered with the sovereign authority of the people by the framers and the consent of the legislatures of the states, it is the source of all government powers, and also provides important limitations on the government that protect the fundamental rights of United States citizens.
-  whitehouse.gov

Q: What body has the power to impeach a high-ranking official?

A: The House of Representatives.

The House of Representatives shall chuse their Speaker and other Officers; and shall have the sole Power of Impeachment.
-  U.S. Constitution Article I Section 2

Q: What body has the power to try an impeached high-ranking official?

The Senate shall have the sole Power to try all Impeachments.
-  U.S. Constitution Article I Section 3

Q: What is the threshold for impeachment in the Senate?

A: The Constitution dictates that there be at least a two-thirds vote to remove a high-ranking official from office in an impeachment proceeding. In other words, 67 Senate members must vote to convict Trump to remove him from office. Anything less is tantamount to an acquittal. However, if more than 50 senators vote against Trump, he could be in big trouble because 2020 is an election year.

The Senate shall have the sole Power to try all Impeachments. When sitting for that Purpose, they shall be on Oath or Affirmation. When the President of the United States is tried, the Chief Justice shall preside: And no Person shall be convicted without the Concurrence of two thirds of the Members present.
-  U.S. Constitution Article I Section 3

Q: Is Donald Trump the first U.S. president to be threatened with impeachment?

A: No, several presidents have been threatened with impeachment over the years.

Andrew Johnson (1865-1869) and Bill Clinton (1993-2001) were impeached but later acquitted in the Senate. Meanwhile, impeachment proceedings were started against Richard Nixon (1969-1974), but he resigned before the impeachment vote.

There can never be an impeachment in the future in this country without voluntarily impeaching himself. I impeached myself. That speaks for itself... By resigning. That was a voluntary impeachment.
-  Former U.S. President Richard Nixon in an interview David Frost

Q: What is President Trump accused of?

A: Broadly speaking Trump is accused of high crimes and misdemeanor under the U.S. Constitution. More specifically though, he is accused of abuse of power and obstruction of Congress as stipulated in the articles of impeachment — a list of charges brought against a high-ranking official to begin the impeachment process.

Donald John Trump, President of the United States, is impeached for high crimes and misdemeanors
-  congress.gov

Q: Can Donald Trump run for the presidency in November 2020 if the Senate votes to uphold the impeachment from the House of Representatives?

A: If the U.S. Senate votes to convict and remove Trump, he would almost certainly be ineligible to run for a second term. The U.S. Constitution speaks of disqualifying people who are impeached from offices of "honor and trust."

Also an acquittal far from ensures a re-election. Take Andrew Johnson, for example, he was acquitted by the Senate, but he was not endorsed to run for a second term.

Judgment in Cases of impeachment shall not extend further than to removal from Office, and disqualification to hold and enjoy any Office of honor, Trust or Profit under the United States
-  U.S. Constitution Article I Section 3

Q: Reports on the impeachment process use terms such as "trial," "convict" and "crime." Is impeachment a judicial process or a constitutional process?

A: The best answer is that it is a pseudo-judicial process. Impeachment acts like an indictment in the criminal justice system, and the House of Representatives acts like the prosecutor in a court trial. The Senate takes a special oath and acts like a jury; the senators act like the jurors, and the chief justice presides when the party being impeached is a sitting U.S. president. But the process remains a constitutional one.

This is so for two reasons. The first is that the Constitution only gives the Senate power to remove an individual from office, and the second is that a sitting president is protected from conviction. Hence, said president cannot be convicted of a crime in the justice system while in office. However, the circumstances change when that person is removed or if, in the case of Nixon, that person resigns.

The Constitution states that an impeached official can then be tried in the criminal justice system. So, having lost his protection as president, Nixon had to be pardoned to escape a criminal conviction for his role in Watergate. President Gerald Ford pardoned the former president on September 8, 1874.

Judgment in Cases of impeachment shall not extend further than to removal from Office, and disqualification to hold and enjoy any Office of honor, Trust or Profit under the United States: but the Party convicted shall nevertheless be liable and subject to Indictment, Trial, Judgment and Punishment, according to Law.
-  U.S. Constitution Article I Section 3

Q: If Trump is convicted in the Senate impeachment proceedings, can another president pardon him?

A: No. The job as a president comes with a lot of power, but pardoning a person that has been impeached is not among them.

He shall have Power to grant Reprieves and Pardons for Offences against the United States, except in Cases of Impeachment.
-  U.S. Constitution Article II Section 2