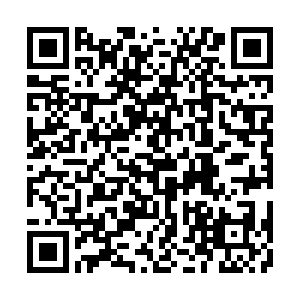 The ATP Cup is the inaugural 24-nation event that is being played in Australia's Brisbane, Perth and Sydney starting on Friday.

At the opening day, players were scheduled to play in two men's singles matches and one doubles' event.

Canada had a 3-0 clean sweep against Greece at the opening day in Brisbane.

And the two Canadians combined in the doubles to beat Pervolarakis and Tsitsipas 6-2, 6-3. 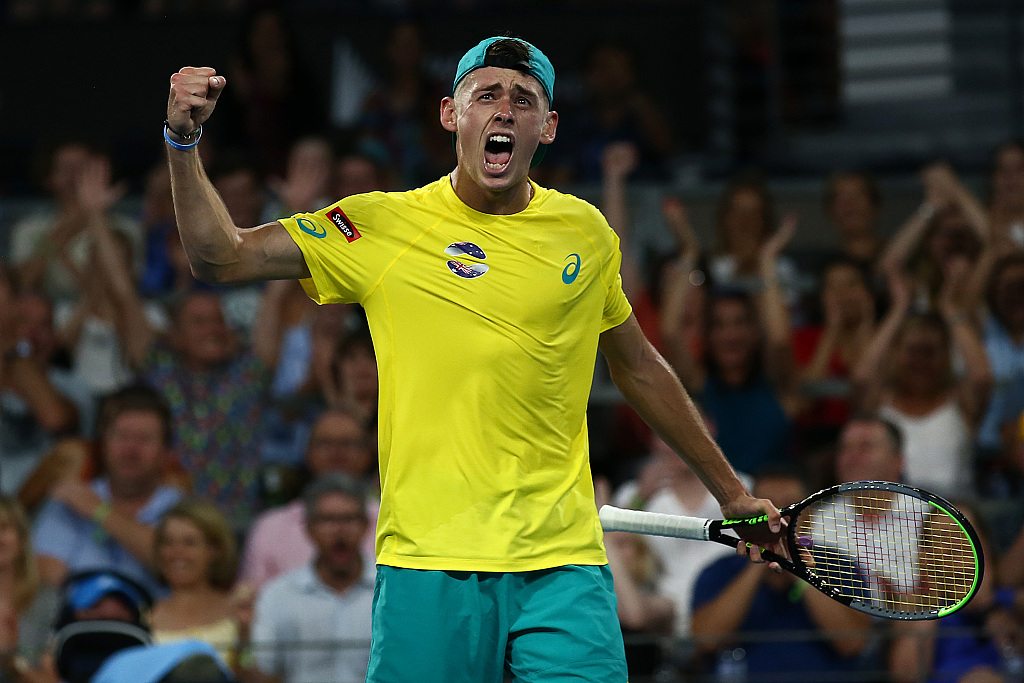 Alex de Minaur of Australia celebrates after winning against Alexander Zverev (not pictured) of Germany during the inaugural ATP Cup in Brisbane, Australia, January 3, 2020.

Alex de Minaur of Australia celebrates after winning against Alexander Zverev (not pictured) of Germany during the inaugural ATP Cup in Brisbane, Australia, January 3, 2020.

Australia's Alex de Minaur came from a set and a break down to overhaul Germany's Alexander Zverev and cause a major upset in another match in Brisbane on Friday.

Kyrgios, who has promised to donate 200 Australian dollars (140 U.S. dollars) for every ace he serves in the tournament to people affected by the Australian bushfires, fired 20 aces past Struff to win 6-4, 7-6 (7/4).

He became emotional on court when talking about the bushfires.

"We've got the ability and the platform to do something," he said. "My home town is Canberra and we've got the most toxic air in the world at the moment. That's pretty sad. It's tough."

In the men's doubles match, Australian duo Chris Guccione and John Peers had a 6-3, 6-4 clean sweep against the German pair Kevin Krawietz and Andreas Mies. 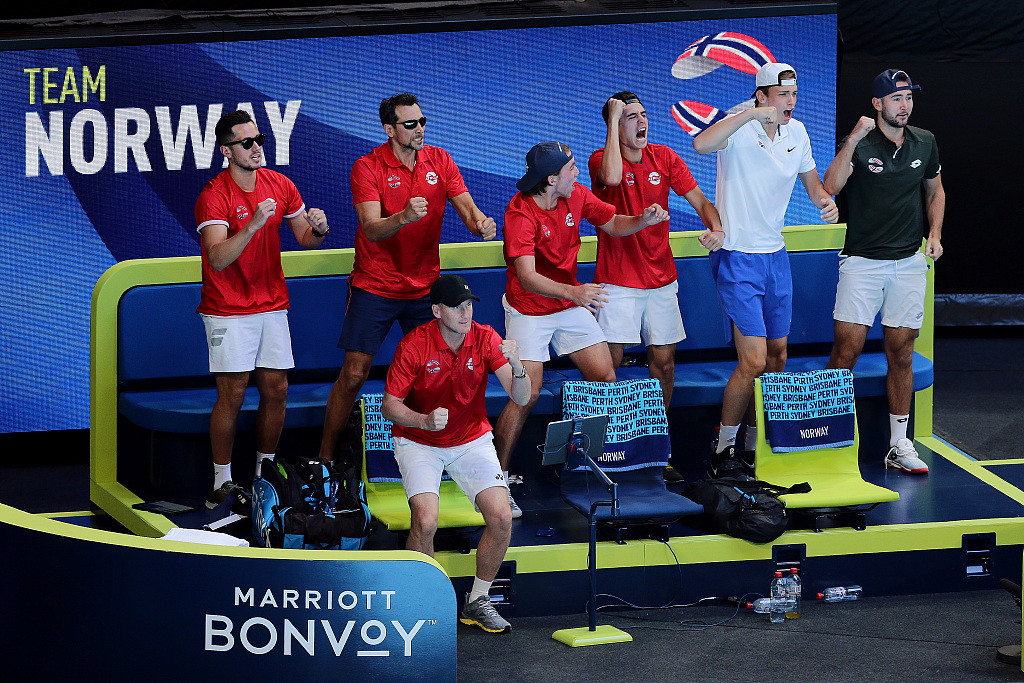 Team Norway celebrate after Casper Ruud's victory over John Isner of U.S. during the inaugural ATP Cup in Perth, January 3, 2020.

Team Norway celebrate after Casper Ruud's victory over John Isner of U.S. during the inaugural ATP Cup in Perth, January 3, 2020.

Then, Norway's emerging youngster Casper Ruud notched the biggest victory of his career after beating big-serving John Isner of U.S. on Friday to spearhead Norway's stunning upset over the U.S. on Friday.

Ruud then backed up in the decisive doubles alongside Durasovic to down American pair Rajeev Ram and Austin Krajicek 4-6, 6-3, 10-5 and trigger jubilant scenes from the Norwegian contingent, who were the last team to qualify for ATP Cup.

"I didn't have much time to recover from my singles. I was a little bit low (on energy) but I got the feet going and we played great. The players are super proud to beat the U.S.," Ruud said.

World No.5 Daniil Medvedev backed his attacking instincts and came from behind to beat Fabio Fognini, as Russia swept Italy in Perth on Friday.

Also, Russia's Karen Khachanov cruised to a 7-5, 6-3 win over Stefano Travaglia of Italy in the singles match.

Then, Medvedev and Khachanov combined to beat Paolo Lorenzi and Simone Bolelli 6-4, 6-3 in the doubles.

In Sydney, ATP Cup organizers were left red-faced on Friday by playing the wrong national anthem for a player from Moldova.

The embarrassing gaffe occurred when the Romanian anthem was played instead ahead of the opening singles tie as Moldova's Alexander Cozbinov faced Belgium's Steve Darcis.

Cozbinov, who lost in three tough sets, played down the mishap.

However, Belgium's top player David Goffin led his team to a 3-0 clean sweep over Moldova. 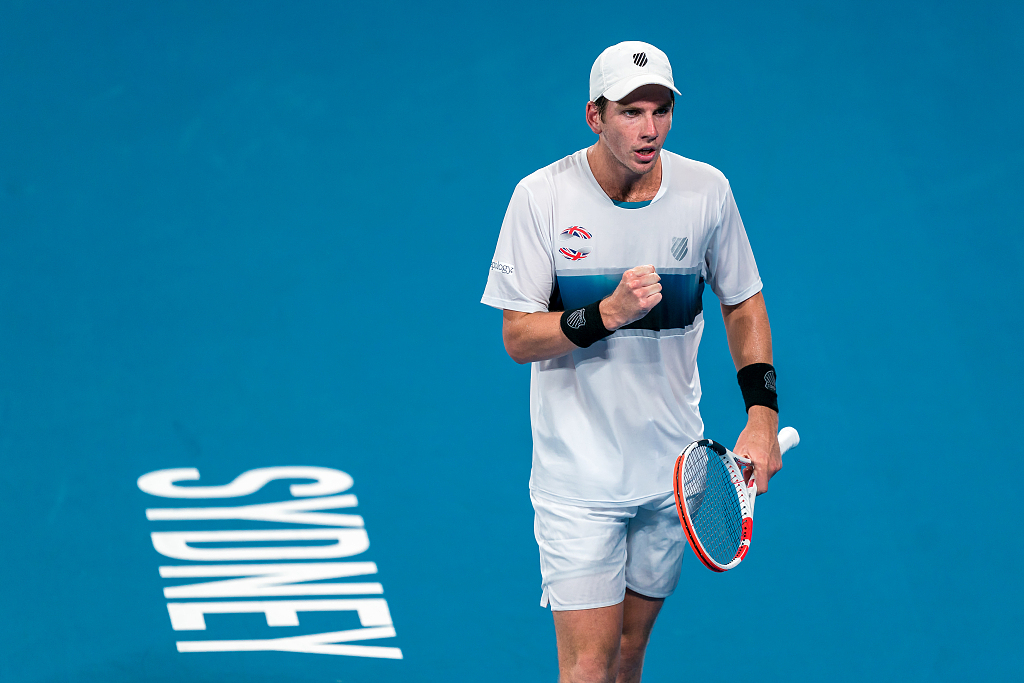 Cameron Norrie of Great Britain cheers for his victory over Dimitar Kuzmanov (not pictured) of Bulgaria during the inaugural ATP Cup in Sydney, Australia, January 3, 2020.

Cameron Norrie of Great Britain cheers for his victory over Dimitar Kuzmanov (not pictured) of Bulgaria during the inaugural ATP Cup in Sydney, Australia, January 3, 2020.

Team Great Britain's only victory against Bulgaria at the opening day of ATP Cup was from his singles player Cameron Norrie, who edged past Dimitar Kuzmanov with a 6-2, 3-6, 6-2 win.