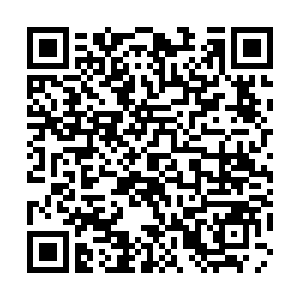 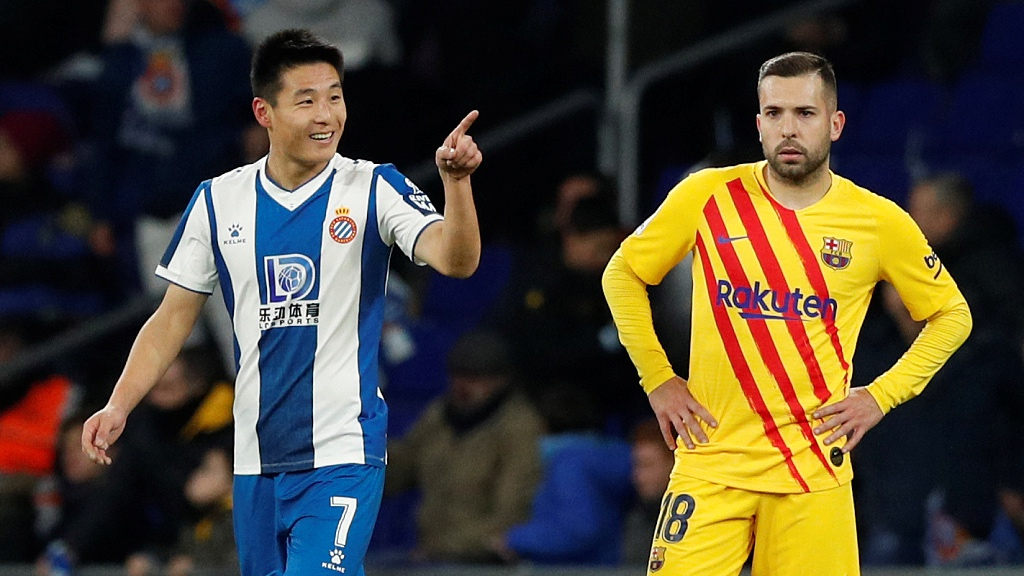 The logic-defying result was greeted rapturously by home fans at the RCDE Stadium on Saturday night. After the final whistle blew, scarves were flung into the air, flags waved, and the club anthem rang out again; two lovebirds danced while holding their selfie stick in the air.

Chinese striker Wu Lei's latest display of heroics has given Espanyol a whole new lease on life, and now they have faith. How could they not after squandering a shocking lead in a high-octane Catalan derby debilitated and pegged back by a mighty Barcelona team? They snatched an improbable draw from the jaws of defeat.

The outpouring of emotion at the end owed much to the unlikely nature of this steely performance. Espanyol are without a league win since October 27 and rooted to the foot of the table. They are facing the deepest crisis of their recent history as their players are looked horribly bereft of any kind of confidence. The club sacked David Gallego in October after a poor run of results and then dismissed Pablo Machin after just 15 games into his new job. Last week saw another change in the leadership as Abelardo Fernandez became the club's third head coach of the season. 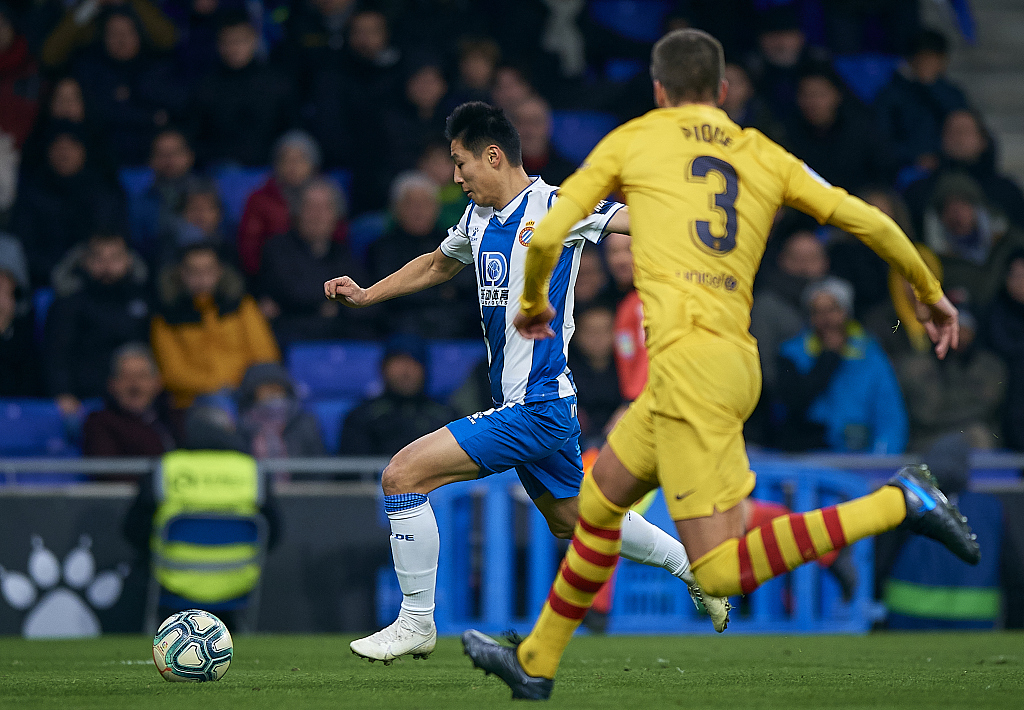 Wu Lei (L) of Espanyol dribbles past Gerard Pique of Barcelona during their Liga clash at RCDE Stadium on January 4, 2020.

Wu Lei (L) of Espanyol dribbles past Gerard Pique of Barcelona during their Liga clash at RCDE Stadium on January 4, 2020.

The former Sporting Gijon and Deportivo Alaves boss was drafted in to perform a rescue mission and his first challenge was an incredibly daunting appointment with defending champions Barcelona, which boast arguably Europe's most fearsome frontline with Lionel Messi and Luis Suarez. Espanyol have not beaten their city rivals since 2009. No one gave this bottom club a chance. Yet they proved doubters wrong in the most electrifying fashion.

Abelardo's team swarmed forward from the off with unusual quick movement and fierce hunger as Barcelona went into their first match of the new year with typical sloppiness and lethargy. Espanyol posed the greater threat in the opening stages only for a consistently poor final ball to undermine their efforts. Still, they deservedly went ahead in the 23rd minute when an unmarked David Lopez headed in Marc Roca's cross.

But the tide turned after the break as Barca manager Valverde swapped Ivan Rakitic for Vidal at half-time. They lived up to their status of being one of the competition's best teams and finally found a way through when Suarez angled Jordi Alba's brilliant cross into the bottom corner. The Uruguayan then turned provider, picking out Vidal who headed home to seal a remarkable comeback. 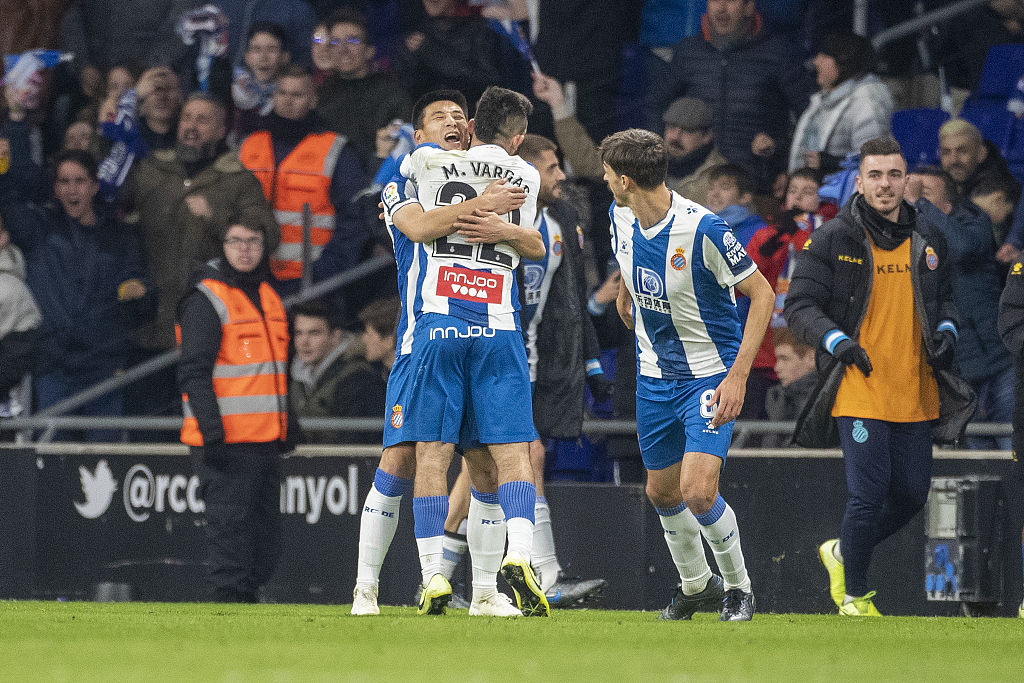 Wu Lei is congratulated by Matias Vargas after scoring the equalizer late in the game during their Liga clash at RCDE Stadium on January 4, 2020.

Wu Lei is congratulated by Matias Vargas after scoring the equalizer late in the game during their Liga clash at RCDE Stadium on January 4, 2020.

The drama had only just begun.

Just one minute after Wu Lei was summoned from the bench in place of Oscar Melendo to inject a fresh urgency into Espanyol, Barcelona midfielder De Jong was sent off for a second booking for pulling Jonathan Calleri's shirt. Wu promptly sensed an air of vulnerability and came close to have an instant impact when his header was smothered by Baca's stand-in goalkeeper Neto.

The Spanish giants were suddenly on the back foot and then came the moment the home fans in the 40,000 crowd had been waiting for.

With only three minutes to go, Wu, suddenly liberated from his markers again with Barca unnerved, tore at Gerard Pique, dizzying the veteran Spaniard before firing past Neto with admirable aplomb. Abelardo could not have scripted this more outlandishly, other than to have Wu, the Chinese star who suffered a dip in form this season and with one league goal to his name, come up with the precious leveler.

The unbridled joy and wild celebrations thereafter betrayed a man and a team who had barely believed this was possible. Wu has now become the first Chinese player to score against Barcelona in all competitions ever. A new chapter in history has been opened. 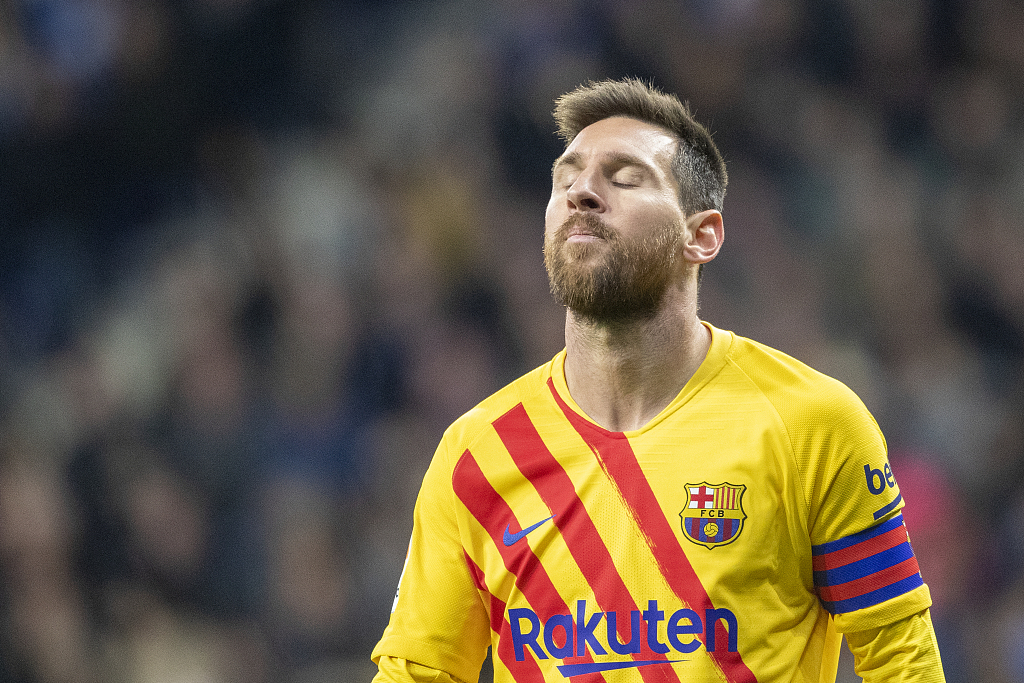 For Wu, it was a night that will live long in the memory. His name was splashed across the back page of the Sunday papers as global news outlets began to digest the incredible scenes. Spanish national daily Marca hailed Wu's brilliant finish that "condemned Barcelona to go back to their bad old ways." Mundo Deportivo marveled that "a fantastic Wu Lei snatched Barca's triumph at the death," while British media the Guardian added "the Chinese striker appeared to bring new hope for a new decade."

It is not the first time that the 28-year-old has single-handedly revitalized Espanyol. But on this occasion, the struggling club's strength of character to avoid relegation is flooding back.

The ludicrous nature of the finale had left their more glamorous neighbors in La Liga utterly frustrated. Barcelona's two-point advantage removed after Real Madrid earlier clinched an impressive 3-0 win at Getafe. The Chinese golden boy, who spread his arms in front of the home fans, had enjoyed the last laugh.