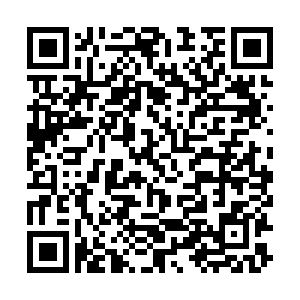 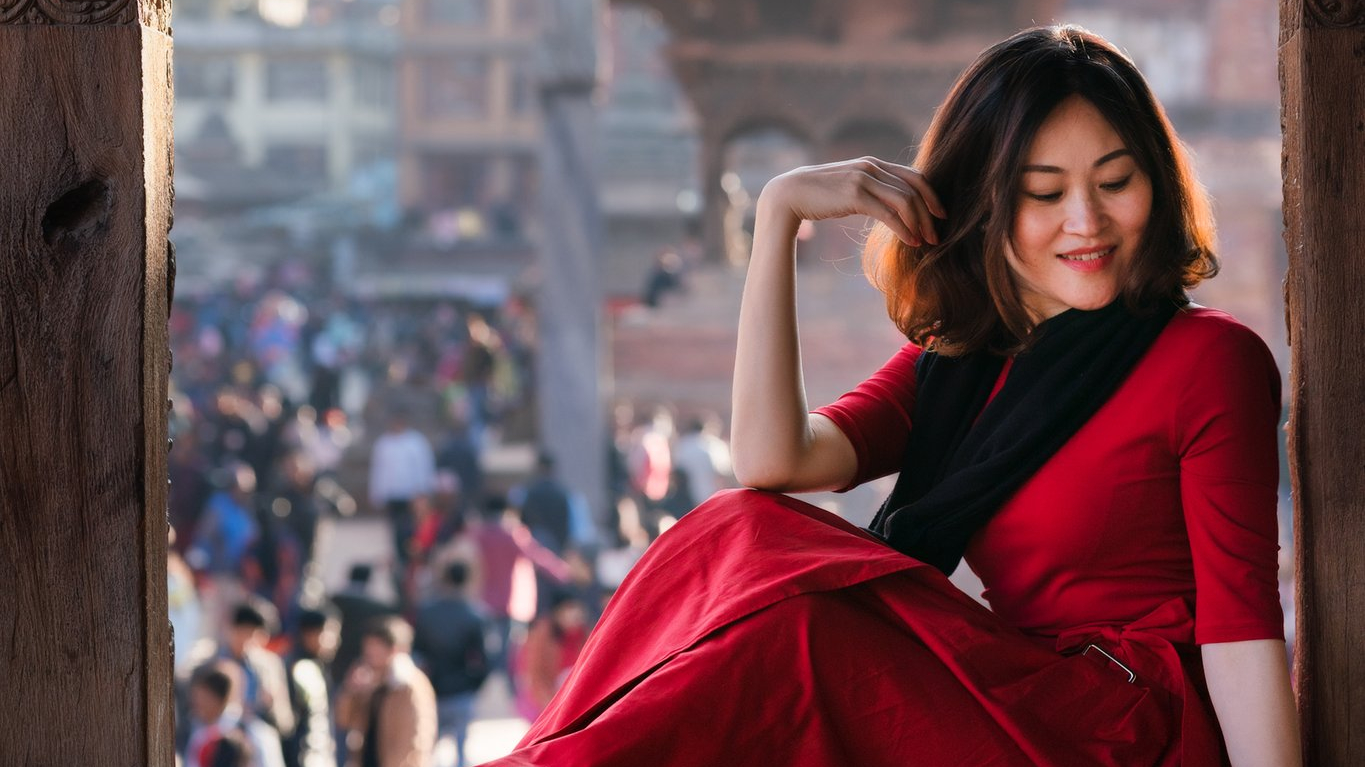 Chinese ambassador to Nepal Hou Yanqi posted pictures of herself on social media showcasing the beauty of Nepal as she encouraged people to visit the South Asian country. /Photo via Hou Yanqi's Twitter account

Chinese ambassador to Nepal Hou Yanqi posted pictures of herself on social media showcasing the beauty of Nepal as she encouraged people to visit the South Asian country. /Photo via Hou Yanqi's Twitter account

Nepal has got a formidable "brand ambassador", in a literal sense, to boost tourism in the Himalayan country as Kathmandu attempts to attract two million foreign tourists this year under the Visit Nepal Year 2020 (VNY2020) initiative.

Chinese ambassador to Nepal Hou Yanqi last Tuesday posted pictures of herself on social media showcasing the beauty of Nepal as she encouraged people to visit the South Asian country. 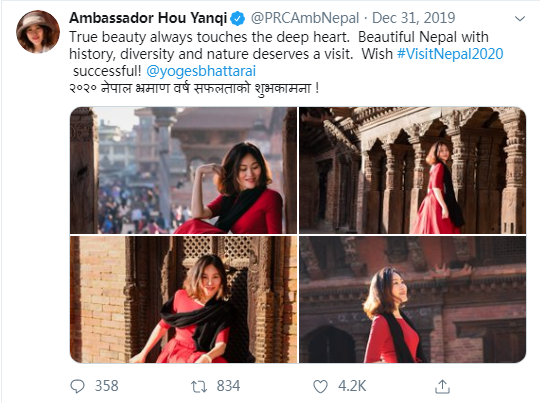 A screenshot of Chinese ambassador to Nepal Hou Yanqi's tweet.

A screenshot of Chinese ambassador to Nepal Hou Yanqi's tweet.

The ambassador's tweet received accolades from Nepalese netizens and media.

"We all Nepalese are so happy and grateful for all the effort you're putting to make our country better. We thank you for your kind and effort. Thanks a lot. #VisitNepal2020," Anish Ansari commented in response to the envoy's post. 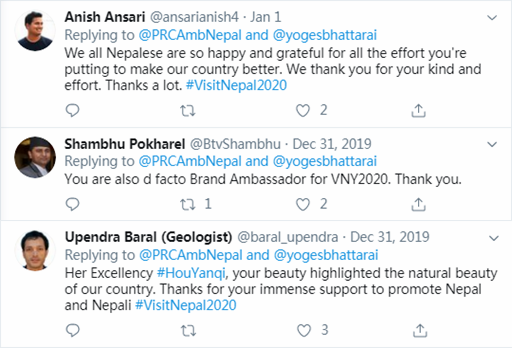 Screenshots of the reaction from Nepalese netizens to Chinese Ambassador Hou Yanqi's tweets.

Screenshots of the reaction from Nepalese netizens to Chinese Ambassador Hou Yanqi's tweets.

"It was a wise decision for Nepal to choose her as an influencer to promote tourism from China," Kathmandu-based Chinese art curator Justin Zhao told Nepali Times.

"Next door China is the biggest potential market for tourism development in Nepal, and the number of Chinese tourists to Nepal is growing rapidly," added Zhao, who has lived in Nepal for seven years and founded the Himalayan Light Art Award. 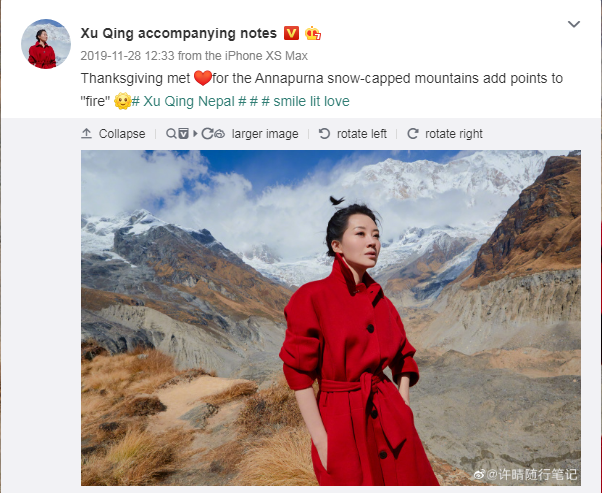 Official data has revealed that nearly 135,000 Chinese tourists visited Nepal in the first 10 months of 2019, a surge of 11.5 percent year-on-year for the same period. The Himalayan country has witnessed a steady increase in visitors from its northern neighbor ever since Kathmandu announced free visas for Chinese nationals in 2011.

The number of Chinese visitors has increased by 32.7 percent in the past five years to a record high of 150,000 in 2018, up from 2013's 113,000. China is now the second-largest source of foreign tourists to Nepal, just behind India, and accounts for about 14 percent of all foreign arrivals to Nepal.

Following Chinese President Xi Jinping's successful state visit in October 2019, the number of Chinese travelers to Nepal is expected to peak this year as both countries are poised to advance economic and trade ties through more cooperation on the Belt and Road Initiative (BRI), Ambassador Hou said Thursday in an interview to the Global Times.

"Nepal is home to a variety of landscapes and climate conditions, with a relatively affordable travel expense, plus it has a close geographic proximity to China. It is one of the best options for Chinese who would like to indulge in a different cultural environment," Liu Xiaoxue, an associate research fellow at the Chinese Academy of Social Sciences' National Institute of International Strategy, told the Global Times.

Nepal's local media has reported that authorities expect the volume of Chinese tourists to reach 500,000 this year, which would make up about one quarter of the 2 million foreign visitors Nepal is targeting under the Visit Nepal initiative. 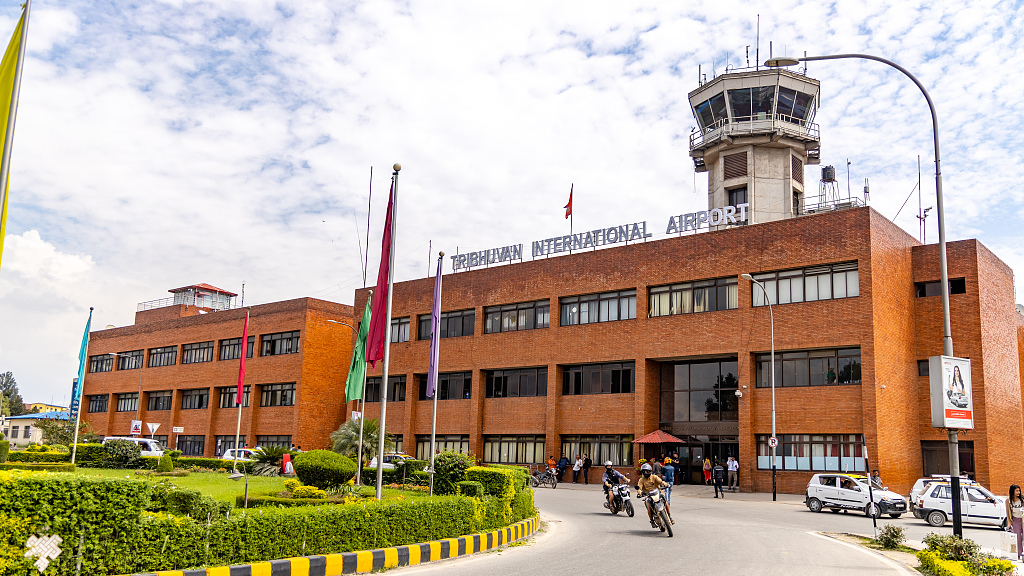 While authorities and entrepreneurs have reportedly made an effort to target potential Chinese visitors, concerns remain over poor infrastructure and high airfares.

"Air tickets to Nepal are too expensive. The price in the peak season is more than double to similar destinations. If the price of air tickets can be reduced to about the same as that of flying to Thailand, more people would love to come," Chinese national Wang Ziping, who runs a restaurant in the Nepalese city of Pokhara, told Nepali Times.

Others felt that unless the infrastructure bottlenecks such as airports and highways are fixed, Nepal may find it difficult to meet its ambitious target. 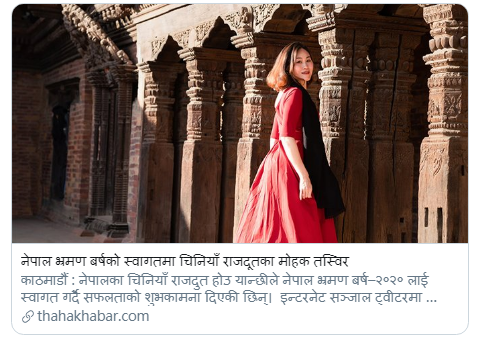 Emphasizing the China has been the largest investor in Nepal for the past four years, Hou said her country is helping its Himalayan neighbor to improve its infrastructure, a key aspect for enhancing its tourism potential.

Hou insisted that following Xi's October visit, the year 2020 will be the "early harvest year" for both countries to implement the leaders' consensus, noting that work is swiftly progressing on a joint feasibility study of a bilateral free trade agreement, choosing the location of a China-Nepal cross-border economic cooperation zone, food import and export safety, production capacity and investment.