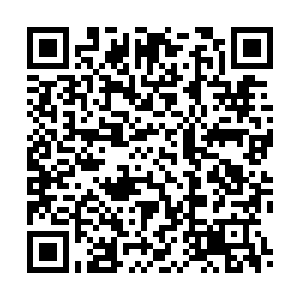 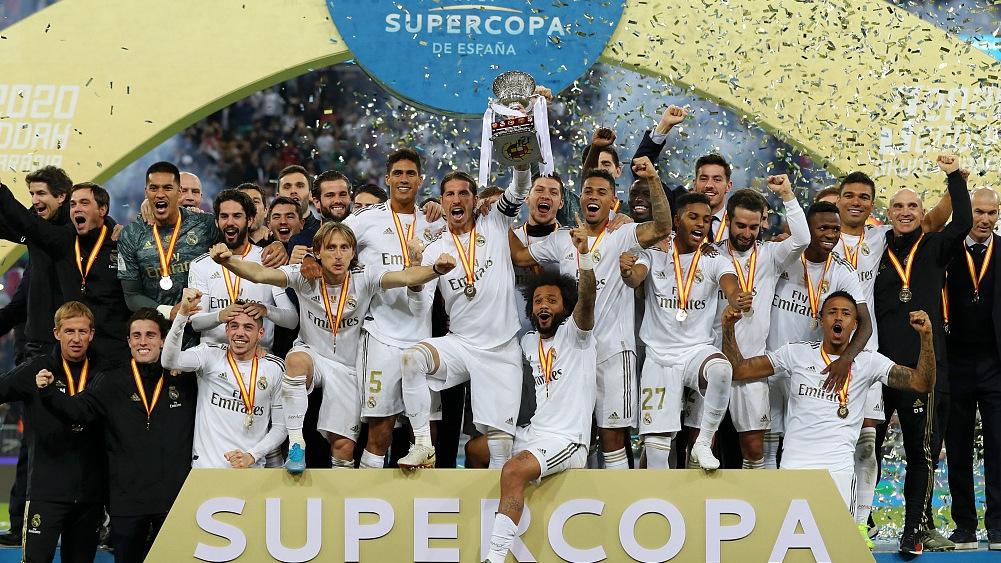 Courtois and Jan Oblak were both imperious during a goalless final in Jeddah but the Belgian came up trumps, saving Thomas Partey's penalty after Saul Niguez had already hit the post.

Sergio Ramos tucked away the winning spot-kick to ensure Real Madrid clinched their first trophy of the season, with La Liga and the Champions League next in their sights.

"I went through their takers on the bench," said Courtois. "Saul's surprised me but Thomas' I read, and he's got a very hard shot."

Atletico might have won it in extra-time when Alvaro Morata went through one-on-one but Real's Federico Valverde took a red card in exchange for cynically fouling the striker from behind.

"It was something you shouldn't do and I apologized to Alvaro but it was the only option I had left," said Valverde.

"It was the most important moment of the match," added Atletico coach Diego Simeone.

"If he had gone through it was a goal but I told him that anyone would have done the same in his position."

He has now led Madrid to success three times in the Champions League, and two each in the Club World Cup, UEFA Super Cup and now Spanish Super Cup.

"I have won many things as a player and now as a coach," said Zidane. "But I congratulate the players. You can achieve anything if you work hard enough." 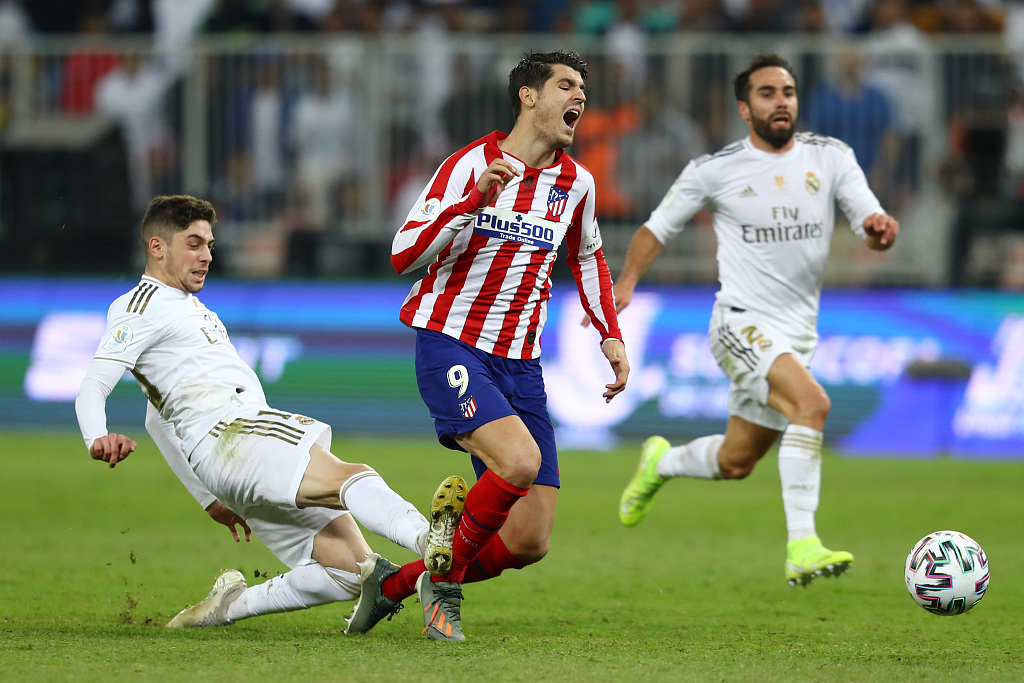 Real Madrid played brilliantly to beat Valencia on Wednesday while a pulsating 3-2 win for Atletico on Thursday has put Barcelona coach Ernesto Valverde on the brink of the sack.

And although the final lacked goals and quality finishing, there was drama until the end and joy on the faces of Real Madrid's players as Ramos hoisted another trophy under the fireworks.

Ramos had been guilty of sloppiness early on and Atletico should have capitalized.

The defender played a pass straight to Joao Felix on the edge of the area but Felix dragged wide and then Ferland Mendy gave the ball away, only for Morata to look for contact from Courtois and a penalty when there was neither.

Both teams had good chances to win it late on, with Luka Jovic's deflected cross finding Valverde free five yards out but the midfielder's header hit his own knee before drifting harmlessly over.

Then Atletico might have nicked it as Kieran Trippier clipped an excellent pass over the top for Morata, who opted for accuracy rather than power and Courtois was able to push away.

Into extra-time and, with 105 minutes on the clock, Courtois did well to flash out a leg and block Morata's acrobatic effort while Oblak twice denied Real, first a curling shot from Luka Modric and then a follow-up from Mariano Diaz.

Yet the most dramatic moment was still to come as Saul sent Morata clean through, with only Courtois to beat, before the chasing Valverde scythed him down from behind.

The red card was inevitable but Atletico only had a free-kick and, for four minutes, a one-man advantage. Trippier hit the free-kick into the wall and Real held on for penalties.

Modric swept into the corner before Trippier did the same. It was left to Ramos to hit the winning shot. 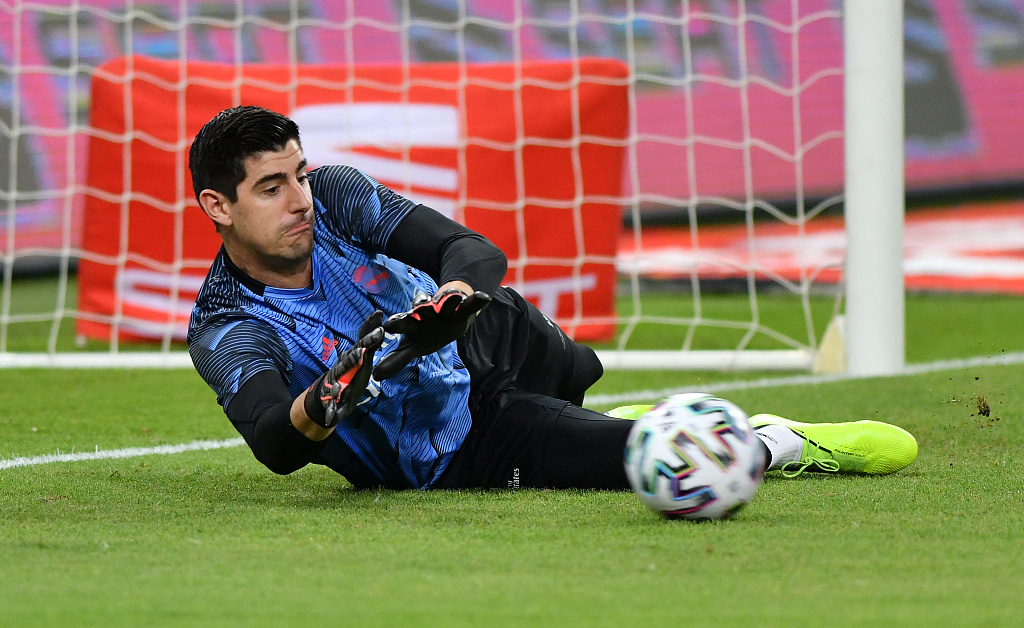 Elsewhere, Cristiano Ronaldo stretched his goal-scoring streak to six consecutive league games as Juventus took top spot in Serie A on Sunday with a 2-1 win at Roma, whose defeat was made worse by the cruciate ligament injury of rising star Nicolo Zaniolo.

Juventus move two points ahead of Inter Milan, who were held 1-1 by Atalanta at the San Siro on Saturday, to move top after going two goals up in just 10 minutes in Rome.

Meanwhile, PSG's defensive shortcomings were exposed as Monaco snapped the champions' Ligue 1 winning streak in a thrilling 3-3 draw at the Parc des Princes on Sunday.

Neymar opened the scoring for the leaders, but Monaco, who were playing their first Ligue 1 game under new coach Robert Moreno, hit back with goals from Gelson Martins and Wissam Ben Yedder.

PSG leveled with an own goal from Fode Ballo-Toure and Neymar netted his second to put them ahead, before substitute Islam Slimani grabbed a point for the visitors.

The result left PSG on 46 points from 19 games, five ahead of second-placed Olympique de Marseille, who have played a game more. Monaco are eighth on 29 points having also played 19 games.