Graphics: How strong are U.S. and Iran militaries in the Middle East?
By Zhao Hong 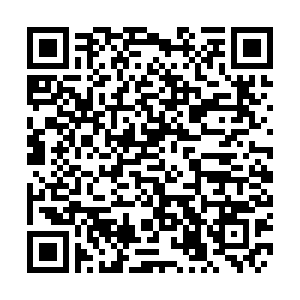 Those incidents have prompted widespread concerns about the mounting tensions in the Middle East area. However, both sides are testing each other's bottom line on the brink of direct military confrontation, said Li Shaoxian, director of the China-Arab Research Institute at Ningxia University.

U.S. Department of Defense (DOD) has been posturing itself in the Middle East region defensively, with the ability to respond to aggression. Recently, U.S. officials have argued that additional forces flowing in the region, as well as the strike against Soleimani, are intended to "re-establish deterrence."

According to DOD, there are approximately 60-80,000 U.S. troops in the region as of June 19, 2019, including around 13,000 troops in Afghanistan and 5,200 in Iraq. In recent months, the Pentagon has announced several troop and capability deployments of approximately 10,000 additional troops.

In response to attacks on the U.S. embassy in Baghdad on December 31, the U.S. announced the deployment of an infantry battalion to Kuwait with 750 soldiers to deploy immediately and additional 3,000 military personnel thereafter.

On January 5, DOD declared that a task force of U.S. Special Operations Forces was deployed to the Middle East. On the following day, it was announced that the 26th Marine Expeditionary Unit was being directed to the Mediterranean, and six B-52 Stratofortress bombers were reported to be sent to Diego Garcia in the Indian Ocean, to be available for operations in Iran.

In the current confrontation, the U.S. clearly has the upper hand, while Iran is nearly besieged by U.S. military bases and is struggling under the weight of U.S. economic sanctions.

Iran remains a major military player in the region

But those military disadvantages haven't stopped the country from being a major military player in the Middle East. Global Firepower Index, an online military ranking website, ranks Iran 14 in the world in 2019 out of 137 countries.

Iran has estimated 523,000 active personnel in the army, navy, air force and the Islamic Revolutionary Guard Corps (IRGC), and another 350,000 reservists. 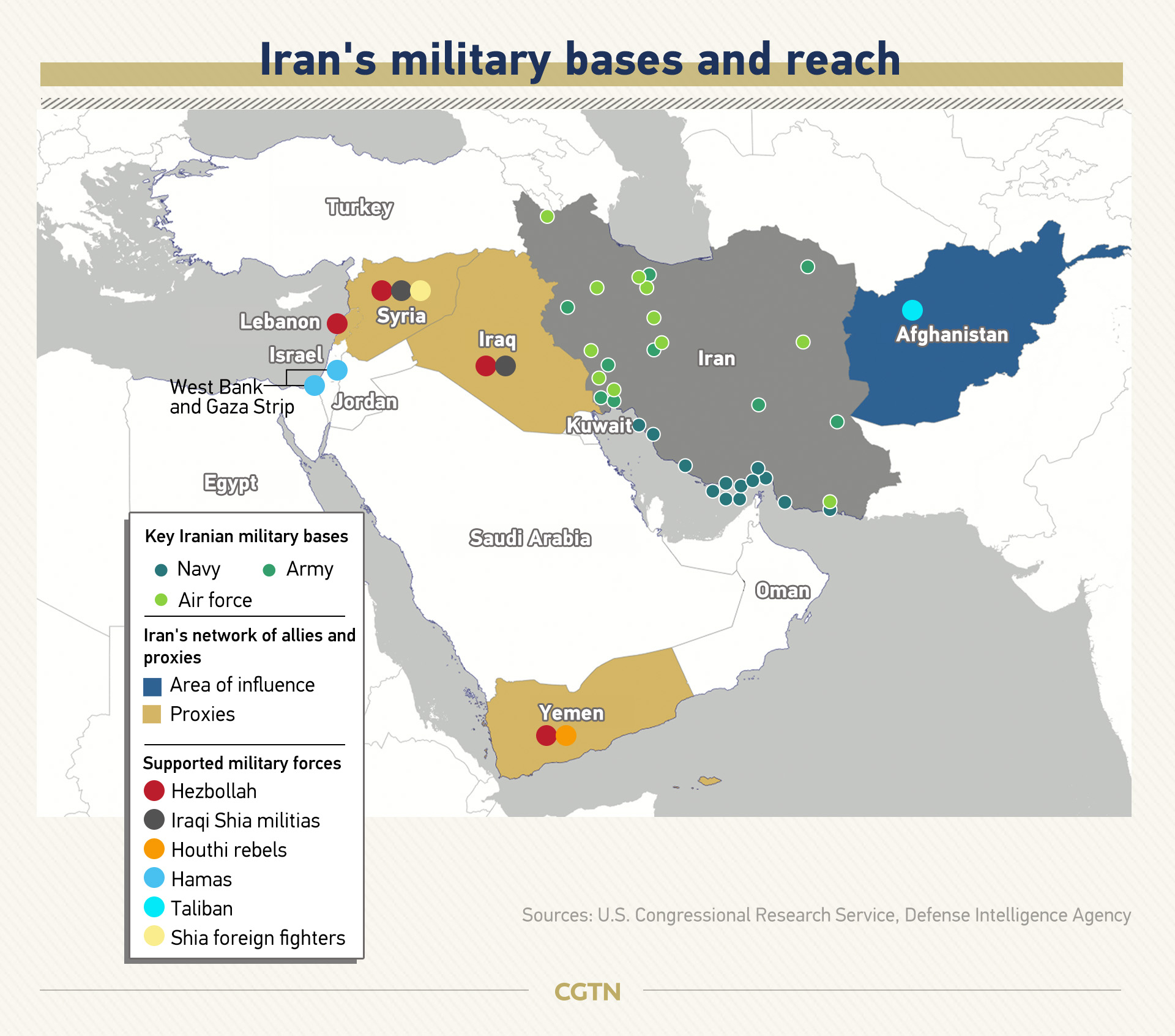 The Iranian military largely relies on three core capabilities: ballistic missiles, naval forces covering Persian Gulf and the Strait of Hormuz and unconventional capabilities including the use of partners and proxies abroad, a U.S. Defense Department report stated.

Iran's missile capabilities are a key part of its military prowess. The U.S. report Iran Military Power Report Statement, released in November, describes Iran with the largest missile force in the Middle East, with substantial inventory of close-range, short-range and medium-range ballistic missiles that can strike targets throughout the region as far as 2,000 kilometers away.

With Soleimani's death, Iran lost the head of its military operations outside its borders, but it has lost none of the vast network of allies and proxies Soleimani built and maintained throughout the region. Such groups include Hezbollah in Lebanon and elsewhere, Iraqi Shia militant groups, Houthi rebels in Yemen, the Taliban in Afghanistan and militants in Bahrain. 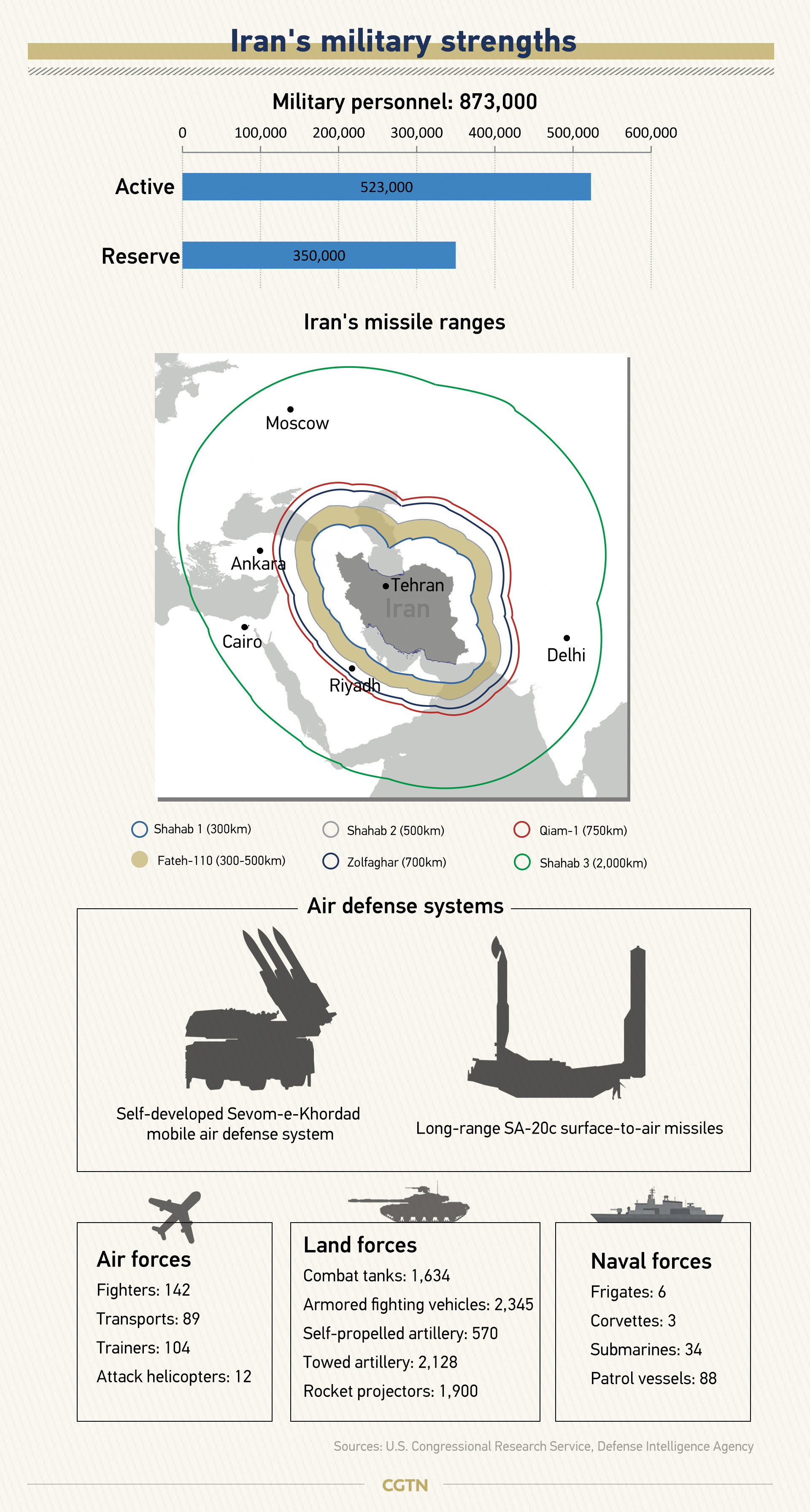 The U.S. has announced new sanctions against Iran while Iran has suspended its obligations to fulfill the nuclear agreement, entering another round of blocking and countermeasures.

But U.S. and Iran do not have the will to conduct a duel by military means. The ordered killing is a plausible strategy for winning voters in an election year, said Yang Guang, president of the Chinese Association of Middle East Studies.

According to recent polls, only about 18 percent of Americans would support the U.S. President Donald Trump if he went to war.

Iran has shown calibrated discretion in retaliation with its missile strikes not causing any American casualties, Yang told CGTN. He said both parties reserved space for negotiation. A large-scale military conflict between the two is unlikely, and the possibility of resuming talks exists.

Li suggested it might be a way to break the current U.S.-Iran standoff if the European countries can persuade the U.S. to loosen sanctions on Iran in exchange for Iran's back to negotiation table.