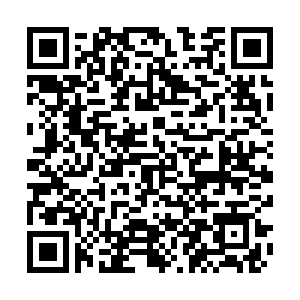 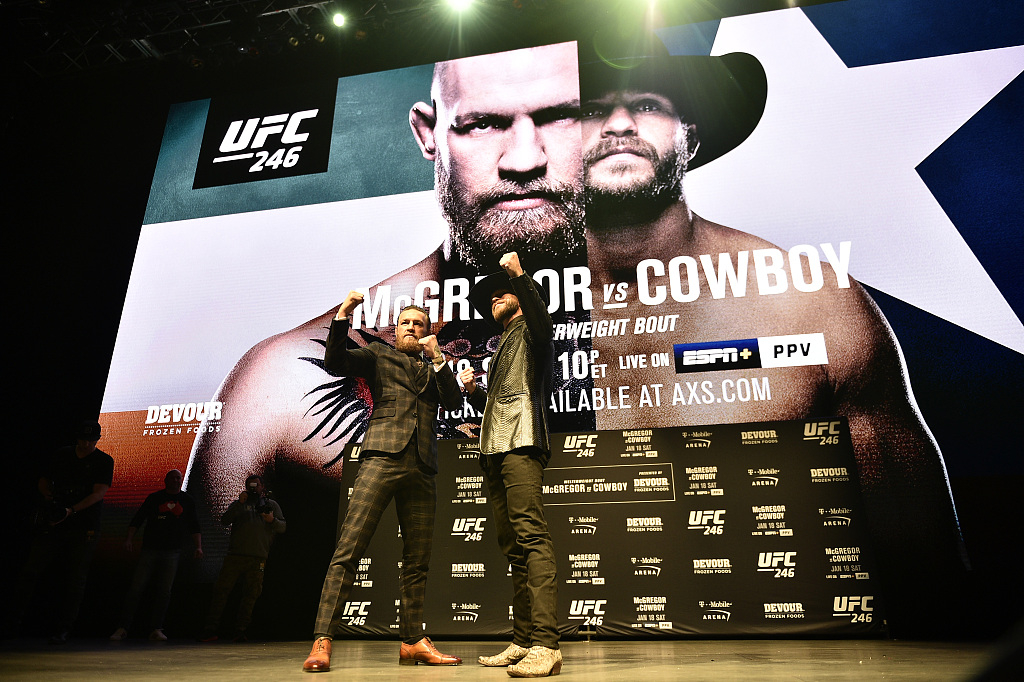 On Sunday, January 18 is a numbered Ultimate Fighting Championship (UFC) PPV event, the first of the calendar year, and as such, it has a full card of fights featuring big name fighters such as Holly Holm and Anthony "Showtime" Pettis.

But if you didn't go out of your way to check and relied on the standard UFC promotional media, you would assume there was only one fight taking place - in fact, you may not even know that the main event will feature two men, because all eyes are on the returning Conor McGregor.

McGregor always draws attention. He's plausibly the only current MMA fighter to have reached the upper echelon of culture, the zone populated by people like Cristiano Ronaldo, Tom Cruise and Bruce Springsteen – the zone where people who don't follow that particular niche still know who you are and are a fan - and with that comes mass adulation on TV, in newspapers and on social media. 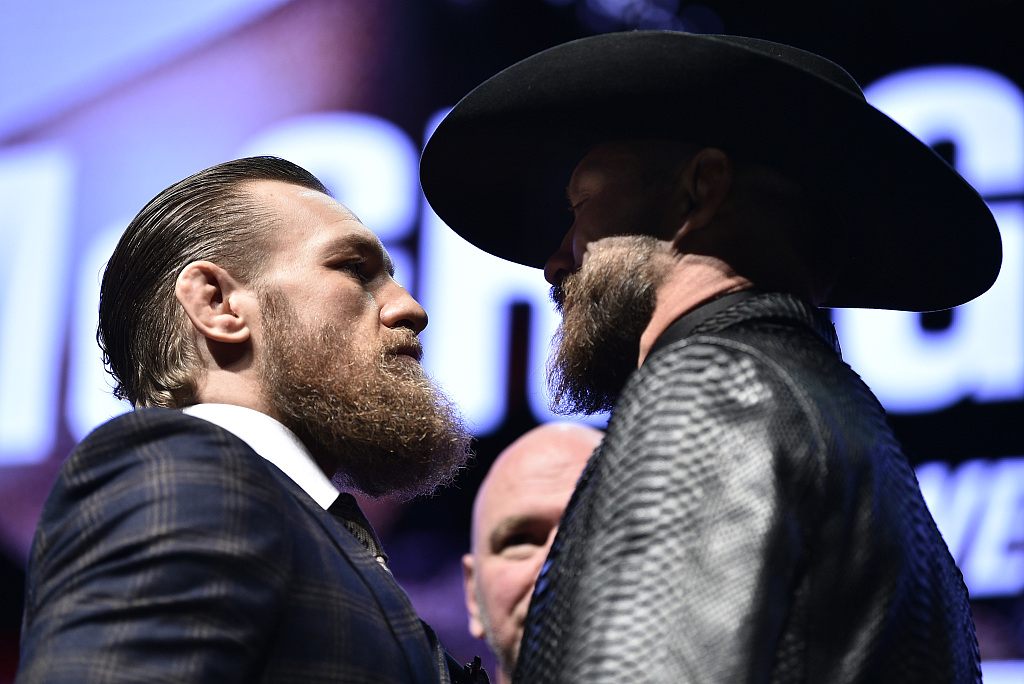 Conor McGregor of Ireland and Donald Cerrone of the U.S. look on each other's eyes in the UFC 246 press conference at Pearl Theater at the Palms Casino Resort in Las Vegas, Nevada, January 15, 2020.

Conor McGregor of Ireland and Donald Cerrone of the U.S. look on each other's eyes in the UFC 246 press conference at Pearl Theater at the Palms Casino Resort in Las Vegas, Nevada, January 15, 2020.

Or, there was. That all changed on October 7, 2018, when he was beaten soundly by UFC Men's Lightweight Champion Khabib Nurmagomedov. The loss for McGregor came after a long and ugly promotional campaign where the Irishman, once known for his quick wit, resorted to playground insults against The Eagle's wife, his religion and his country.

Not only that but, in the ensuing brawl at ringside between the fight camps and entourages of both men, McGregor's side, who had talked tough for months, came out on the losing end too.

Since then, it's been something of a downward spiral for McGregor. It's true that what goes up must come down, but the downfall of the man who popularized the term and concept of "champ-champ," which comes from his holding of the UFC Men's Featherweight and Lightweight Championships at the same time, was swift, away from the Octagon and, even worse, entirely self inflicted.

In the fifteen months since he last competed for UFC, McGregor was suspended for six months and fined 50,000 U.S. dollars by the Nevada State Athletic Commission due to his post-match brawl at UFC 229, has faced two separate allegations of sexual assault, been arrested for smashing a fan's phone and was caught on camera assaulting an elderly man in a pub in his native Ireland because he refused to take a drink of his Proper Twelve whisky.

It seems as if McGregor's Scarface act was catching up with him and he was about to end up with the same fate as Tony Montana. 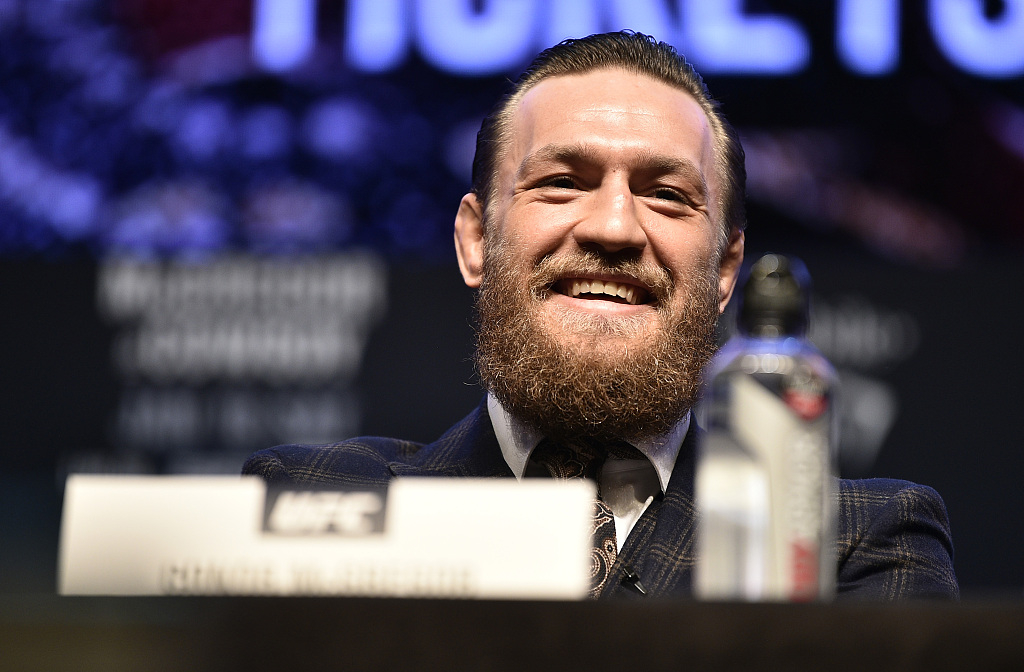 Conor McGregor of Ireland interacts with the crowd during the UFC 246 press conference at Pearl Theater at the Palms Casino Resort in Las Vegas, Nevada, January 15, 2020.

Conor McGregor of Ireland interacts with the crowd during the UFC 246 press conference at Pearl Theater at the Palms Casino Resort in Las Vegas, Nevada, January 15, 2020.

Instead, it seems that has all been put behind him and he is back. In that sentence, seems is the operative word. At the weigh-ins, which took place on January 16, McGregor's hardcore fans were out in force, in smaller numbers than usual, and instead of his typical swagger, he was all smiles and gratitude.

This pleasant and somewhat humble fighter isn't the man fight fans are used to seeing. It would be easy to explain this new persona as McGregor going out of his way to show he's a good boy now and (finally) learned his lesson, but it's also because his first fight back is no walk in the park.

First, it's his first as a true welterweight fighter. The only times he's competed this heavy were in his fights against Nate Diaz: he lost their first fight at UFC 196 on March 6, 2016, a fight that was a last minute replacement, and barely won the rematch by decision in the rematch at UFC 202 on August 21 the same year. Second, he's fighting Donald Cerrone.

The man nicknamed Cowboy is the consummate fighter's fighter. He's been fighting consistently since 2006, won a laundry list of UFC bonuses (including six Fight of the Night and seven Performance of the Night awards) and holds UFC records for most wins and most finishes by KO/TKO or submission.

The gambit is that McGregor and his men look at this and, instead of seeing a veteran, see a journeyman; instead of an eight fight win streak that lasted from 2013 to 2015 and a run of four highlight reel finishes in 2016 alone, they see a man who has lost every major title fight he's been in and come up short against top contenders like Tony Ferguson, Justin Gaethje and Benson Henderson in his prime, time and time again.

For better and worse, the UFC doesn't offer tuneup fights so this is the closest Conor McGregor is going to get. The only way that works, however, is if he's still the fighter he was and not the fighter he came to be in the last year-and-a-half.