Will 'Lost in Russia' getting a free online release change China's movie market?
By Wu Yan 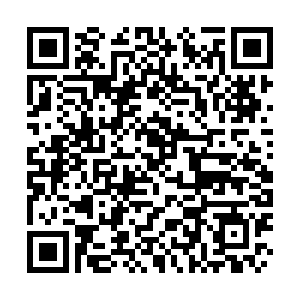 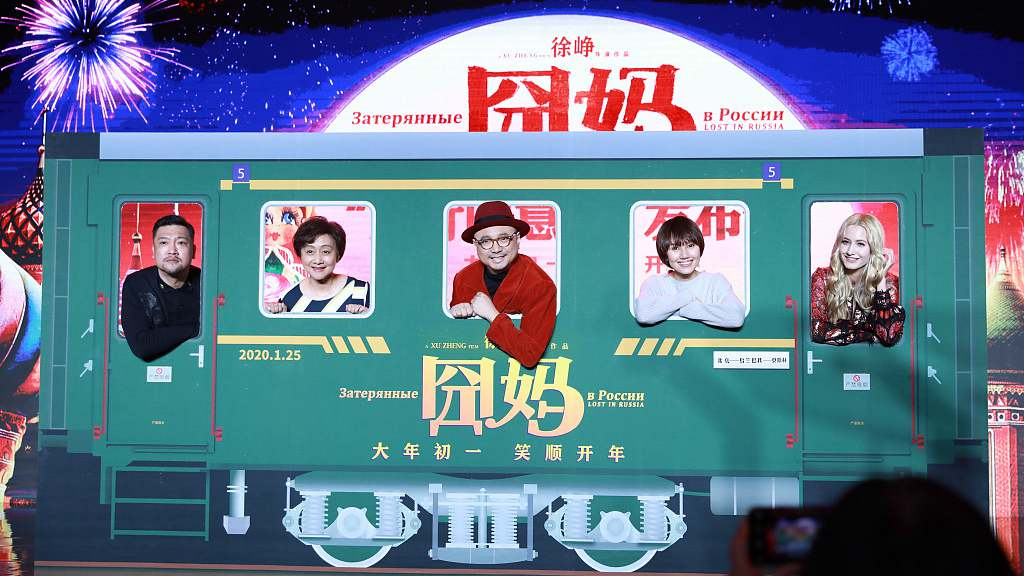 "Lost in Russia," one of the hottest films scheduled to hit big screens during Spring Festival, was released for free online on Saturday, the first day of Chinese New Year.

The comedy-drama, depicting a middle-aged man and his controlling mother on a train ride to Russia, became the first-ever Chinese film to give up its coveted Spring Festival release, breaking one of the biggest rules of the film industry.

This unique decision was made by the producers of "Lost in Russia" for many reasons.

Before Spring Festival, presales ranked behind some competitors, such as the "Detective Chinatown 3," whose predecessor was the most popular film of Spring Festival 2018, and "Boonie Bears: The Wild Life," the latest in the animated film series.

Due to the coronavirus outbreak, all seven films intended for release during the Spring Festival announced their cancellations on January 22, two days before the holiday, in order to avoid people gathering in cinemas where the virus could spread.

With customers cancelling their film-watching plans and getting refunds, it should have been a grim moment for film producers, advertising companies and cinemas.

But on January 23, "Lost in Russia" suddenly announced it would be shown on the streaming platform Huanxi Premium and several online platforms owned by ByteDance, including video-sharing app Douyin - the Chinese version of Tik Tok - and news app Toutiao.

Beloved by audiences, denounced by the industry 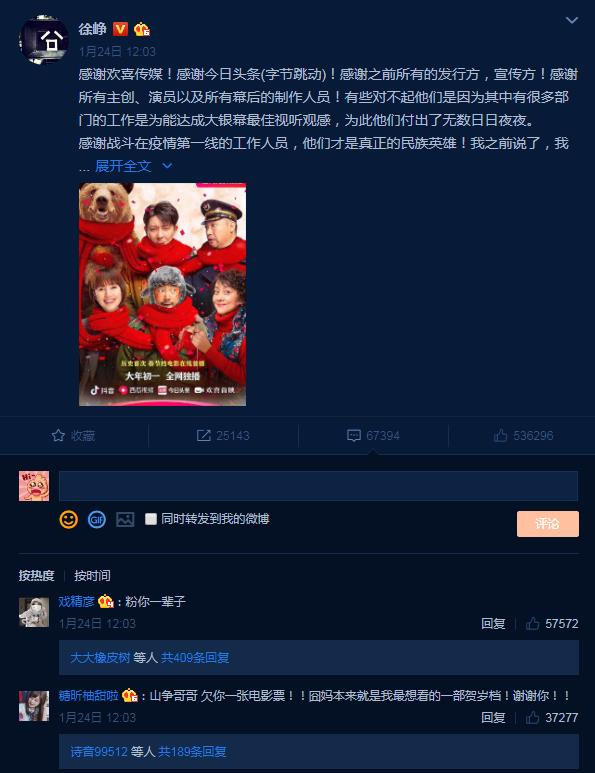 The move was instantly popular. As people have been advised to stay indoors, the free movie was a holiday treat and let them still see a new film together with their family.

Under the post made by star and director Xu Zheng on his Sina Weibo account, a fan commented, "I owe you a ticket. I will watch every film you make from now on."

Another said, "It is very brave of you to screen a new film for free."

Although it's been welcomed by the audience, people inside the film industry are not happy with the move.

An announcement circulated online reveals that some film industry workers in Zhejiang Province, Shanghai and other places condemn Xu for breaking the industry's basic rules and willingly losing money for cinemas across the country, Yangtze Evening News reported on its website.

According to the announcement, the film's online release rights were sold to ByteDance at 630 million yuan (91 million U.S. dollars) by the production company, Huanxi Media Group.

Believing the rewards of the film they were promoting to have been lost due to online platforms, the writers of the announcement defined Huanxi Media Group's behavior as a "betrayal" for "ignoring other insiders' benefits" while "kidnapping public opinion."

They want the film to stop being shown online, otherwise they will boycott films produced by Huanxi Media Group and director Xu Zheng in the future.

Will the film change the industry?

While those in the industry have condemned the move, it has so far proven to be a large success.

If Huanxi Media did gain 630 million yuan for selling online screening rights to ByteDance, it was a good deal as it won winning both fortune and people's acclaim. Plus, Huanxi Media's shares price has increased dramatically in because of the move. 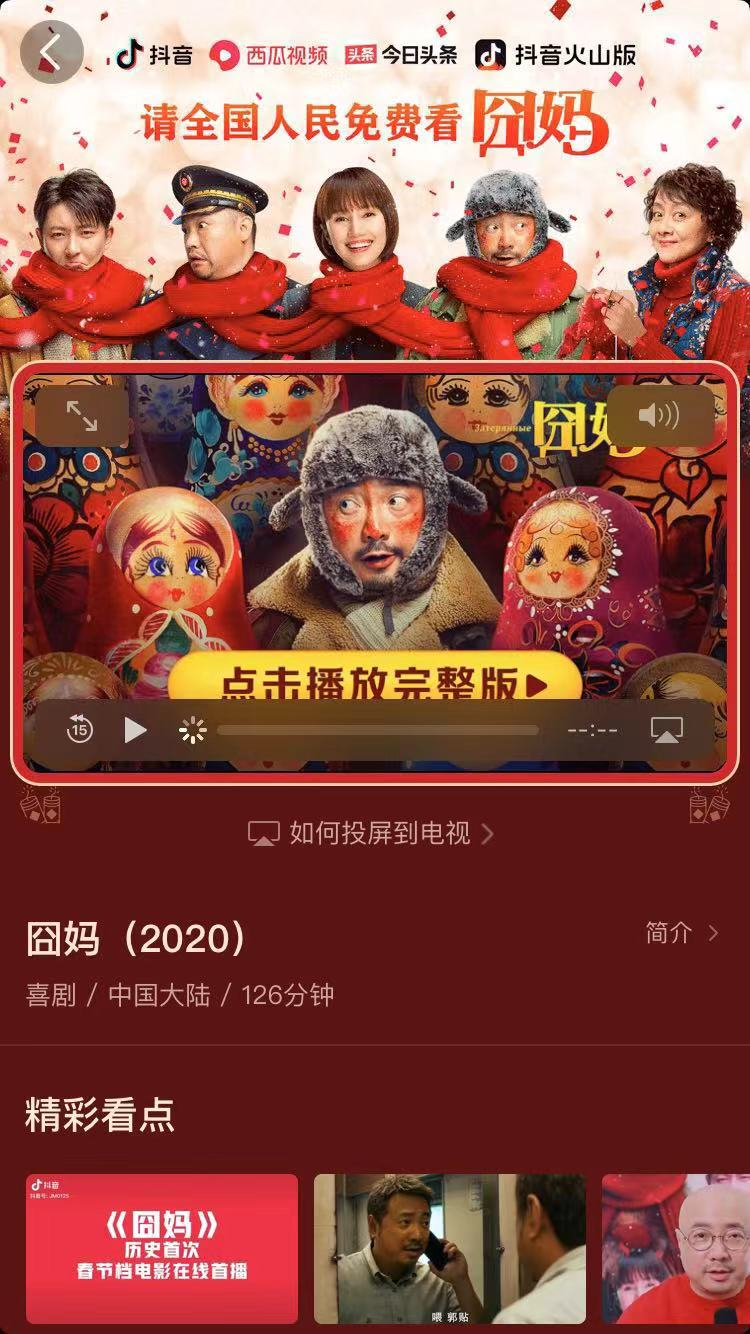 "Lost in Russia" can be watched for free on Douyin. /A screenshot of Douyin

"Lost in Russia" can be watched for free on Douyin. /A screenshot of Douyin

This is just a beginning of cooperation between Huanxi Media and ByteDance. According to Huanxi Media, the two parties have agreed to share video content and channels, and to build a new video platform in the future.

With Huanxi Media's access to top Chinese directors such as Ning Hao and Xu Zheng, and ByteDance's successful experience of running short-video platform Douyin, it is not impossible that the Chinese version of Netflix may be born.

Despite China's big video platforms, such as Youku, Tencent Video and Aiqiyi, making attempts to simulate the Netflix pattern, the high cost of buying the rights to a new film's online release has long hindered potential development. But now "Lost in Russia" has seemingly become a front runner and shown the industry a new way.

But what bother cinemas most is not this single exceptional case. If more new films follow suit at the moment, even after this difficult period of time, will the industry remain unchanged?