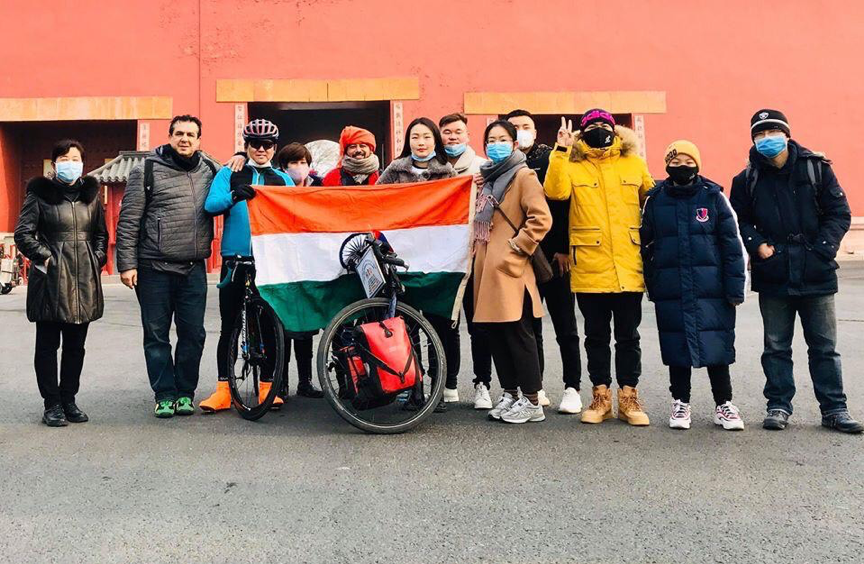 "I'm not scared! I don't panic!" These words of reassurance and confidence came from Indian globe-trotter Somen Debnath. Debnath, who has been on an extraordinary mission of cycling around the world to promote HIV and AIDS awareness, has reached Beijing after crisscrossing through 154 nations in the world.

He commenced his mission way back in 2004 and has not returned to his homeland since 2006. He reached the Chinese capital as he began the final leg of his mission of reaching the soil of 191 countries, covering 200,000 kilometers on his bicycle.

It's going to be a busy year for Debnath as he has set the target of completing his 16-year-long mission later this year with China being one of the first countries of his final push to cycle around the remaining 20 odd countries. 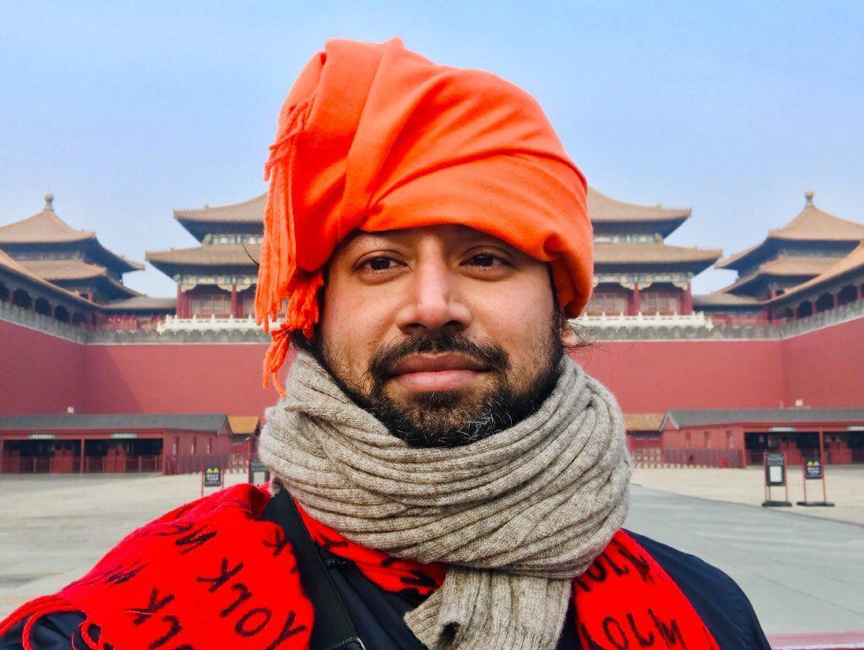 Somen Debnath, a globe-trotter from India.

Somen Debnath, a globe-trotter from India.

However, after riding through the incredibly harsh and extreme winter conditions in Mongolia to start his homerun, Debnath's arrival in China coincided with the ongoing novel coronavirus outbreak.

"It doesn't bother me as I have already been to many disaster-struck countries in these 16 years. I don't get bogged down by all these and as I wish to continue with my mission and fulfill it by the end of the year," Debnath told CGTN as China has been grappling with the deadly endemic.

"I have seen many natural disasters and epidemics during my travel across the globe. I was in Assam during the 2004 floods, was cycling in Sri Lanka when the catastrophic tsunami struck the island nation in 2004, was riding in Kenya during its worst-hit time in the African country in 2014 and was in Florida when the U.S. state was battered by a tornado in 2018. In fact, I was in Japan when a powerful typhoon ravaged the far eastern nation only a couple of months ago last year."

Debnath, who holds the unique distinction of riding his bicycle on a make-shift one-kilometer track on the thick ice in Antarctica, pedaled his two-wheeler through the deserted roads of the coronavirus-scared Chinese capital and took his bike to some of the iconic sightseeing spots in and around Beijing, including the Great Wall of China, Tian'anmen Square, Lama Temple to name a few. 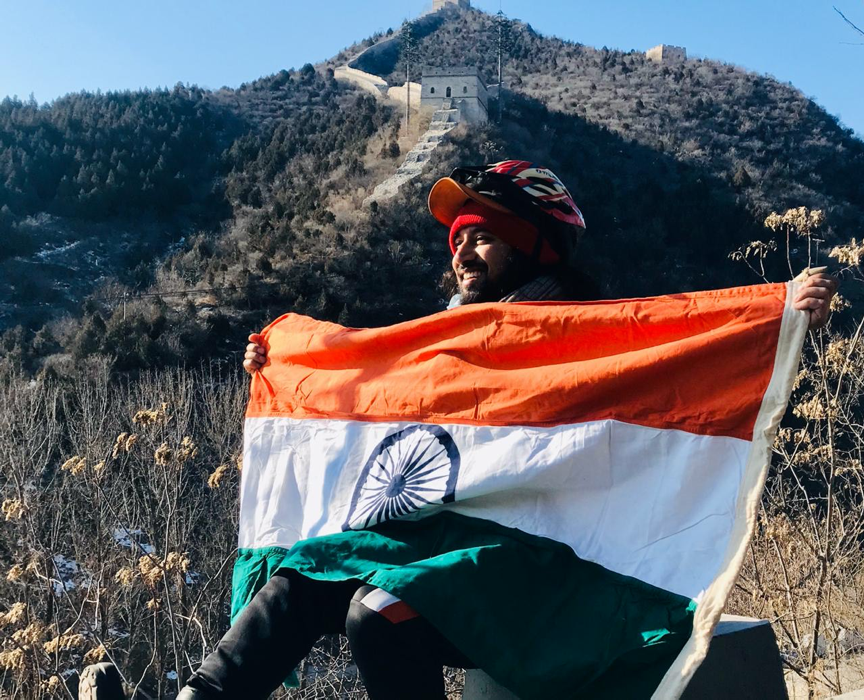 Somen Debnath at the Great Wall of China in Beijing.

Somen Debnath at the Great Wall of China in Beijing.

"I always wanted to visit China. Since my childhood, I have been fascinated by the photographs of the Great Wall and its magnificent beauty. I have many friends in China and it's a dream come true. I must say that the empty roads helped me to roam around on my bicycle without facing any traffic congestion. It's been a smooth ride so far," a visibly calm and composed Debnath nonchalantly remarked without being bogged down by the panic-hit situation around him.

The Indian cyclist and anti-AIDS campaigner did get affected by the coronavirus-shutdown as he had to cancel his plans to cycle to Shanghai under the prevailing circumstances and instead will fly to South Korea directly for the next phase.

However, the diminutive sojourner with a humble background remained unperturbed and mentioned, "I believe in not challenging the nature and its fury. My principle is to live and carry on with all the adversities around and deal with it as it comes." 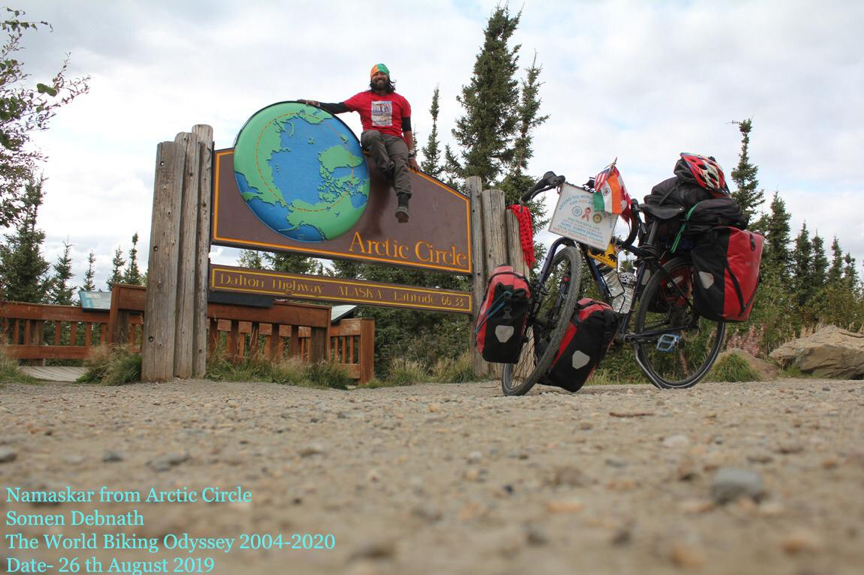 Not only natural calamities and disasters but Debnath has also overcome a slew of mind-boggling challenges over these years. He was captured by the Taliban en route to Herat from Kabul in 2007 and escaped death by a whisker.

"They thought I was a spy and soon after capturing me at gun point they wanted to shoot me. But somehow they had a last minute change of mind and instead held me captive for 24 days. I cleaned their houses, cleaned their guns and even their utensils but the only way I thought I could get out was by offering to cook for them. Some Indian style curry did work wonders for me and they let me go, finally convinced that I was innocent and deserved to be free," Debnath's eyes twinkled while narrating the great escape.

He had another near-death experience when he missed being hit by a suicide bomb attack by a whisker and was robbed six times, beaten more than eight times "because of the color of his skin" and survived for days with wild animals in Africa and deep inside the Amazonian rain forest.

The zoology graduate-cum-artist from a non-descript town near the Sundarbans in the eastern Indian state of West Bengal, has also braved bone-chilling cold conditions in the North Pole and continued to ride his bicycle in minus 30 to 40-degree centigrade temperature in Siberia and Mongolia.

The exuberant explorer, who was once a special guest of the then Greenland Prime Minister Kuupik Kleist, has met 38 Presidents and 72 Prime Ministers of UN-recognized nations across the world while being on the road to fulfill his mission titled "Around the World on Bicycle Tour for HIV / AIDS Awareness and Seminars on Indian Culture 2004-2020."

Debnath will take his bike through the remaining Asian and Oceania countries over the next few months after emphatically showcasing the strength of the human spirit and going through a myriad of experiences, difficulties, trials and tribulations.

"I'm sure China will overcome this phase and will emerge stronger," the globe-trotting cyclist remarked with his infectious positivity and optimism.