Locust outreak or a sign of the times?
Zeng Ziyi 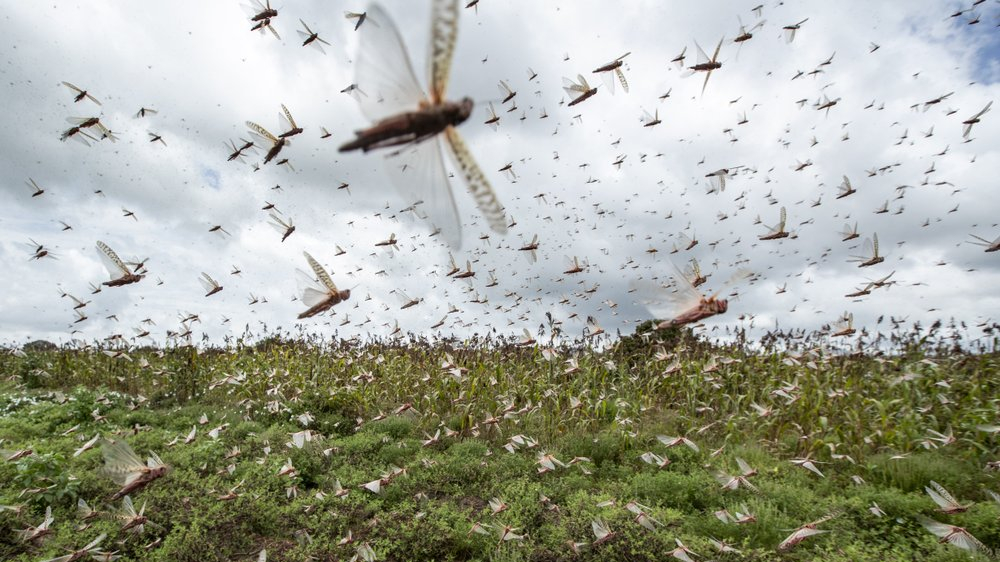 Locust swarms have overtaken the skies above Kenya's countryside since last week, leaving farmers banging on pots and pans in a desperate attempt to drive out a full-scale bug invasion.

But their effort does little to stop millions of voracious insects from overwhelming the fields and devouring everything in their path, including the precious crops that locals rely so much on.

The swarms are so terrifying in scale that some residents have called it the "signs of messiah" on social media, referring to ancient biblical book of Exodus.

The ongoing desert locust outbreak is the worst to hit Kenya in 70 years. In the northern region, raiding parties up to 60 kilometers long and 40 kilometers wide have pillaged at least 13 counties, according to the United Nations.

In neighboring Somalia, where the locusts first appeared, the government has declared emergency over the outbreak, stressing the dire threat it poses to the country's "fragile food security situation."

"The desert swarms are uncommonly large and consume huge amounts of crops and forage," a statement issued by Somalia's Ministry of Agriculture said.

The severe devastation to farmland further threatens a region plagued by chronic hunger, where an estimated 12 million people are coping with food insecurity.

The desert locust is considered the most destructive migratory pest in the world, notorious for its large appetite. Just one square kilometer of them could eat the same amount of food as 35,000 people in one day, according to United Nation's Food and Agriculture Organization. 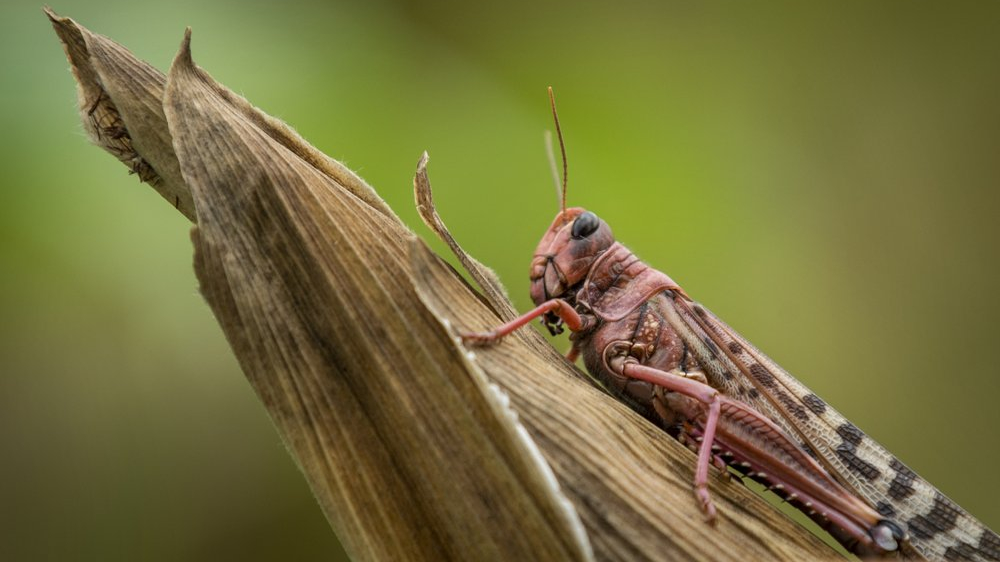 A desert locust sits on a maize plant at a farm in Katitika village, Kitui county, Kenya, January 24, 2020. /AP photo

A desert locust sits on a maize plant at a farm in Katitika village, Kitui county, Kenya, January 24, 2020. /AP photo

Experts warn if the locusts are not effectively dealt with by early March, a new breeding cycle expected to begin this month could see current population grow 500 times by April before drier climate in the summer slows it down.

So far, the Kenyan government has deployed five planes spraying insecticides – one of the few effective methods to combat locust outbreak – to try to stop the pests from spreading to neighboring Uganda and South Sudan.

Governments have responded the best they could, but their response remains insufficient, according to Keith Cressman, FAO's senior locust forecasting officer. More funding is needed to upscale current aerial control operations, including the spraying of insecticides.

"It is very challenging because affected countries have not seen locusts in 25-70 years so their capacity to quickly respond is very limited. In addition, the weather seems to continue to be favorable," Cressman told CGTN.

United Nations Secretary-General Antonio Guterres took to twitter to raise awareness of the situation and pinned the blame squarely on global warming.

"Desert locusts are extremely dangerous," Guterres wrote. "Triggered by the climate crisis, the outbreak is making the dire food security situation in East Africa even worse."

Under normal conditions, desert locusts are largely contained in the dried-up deserts in Africa and Southwest Asia that receive less than 200 millimeters of rain annually. However, depending on the temperature and moisture levels, locust eggs can remain dormant in the soil for two decades before they hatch under some good precipitation.

That's exactly what happened last year – widespread, heavy downpours that pounded the Horn of Africa from October to December, amplified by extreme weathers in the Arabian Sea north of the Indian Ocean.

In 2019, eight cyclones were recorded in the Indian Ocean, far surpassing the normal singular threshold. Heavy precipitation, 400 percent above normal rainfall amount, helped create ideal conditions for the fast-breeding desert locusts to reproduce, according to Cressman.

Scientific research throughout the years have found that warm and wet winters, which have become more frequent under the effect of global warming, are especially conducive to locust outbreaks. There's also evidence now that suggest the locusts have adapted to the ever-changing weather patterns.

"Pests are changing their behavior and adapting to changing climate. Locusts that leave India at the onset of winter, are now spending winter here," joint director of agriculture department of India's Rajasthan state told Down to Earth magazine. 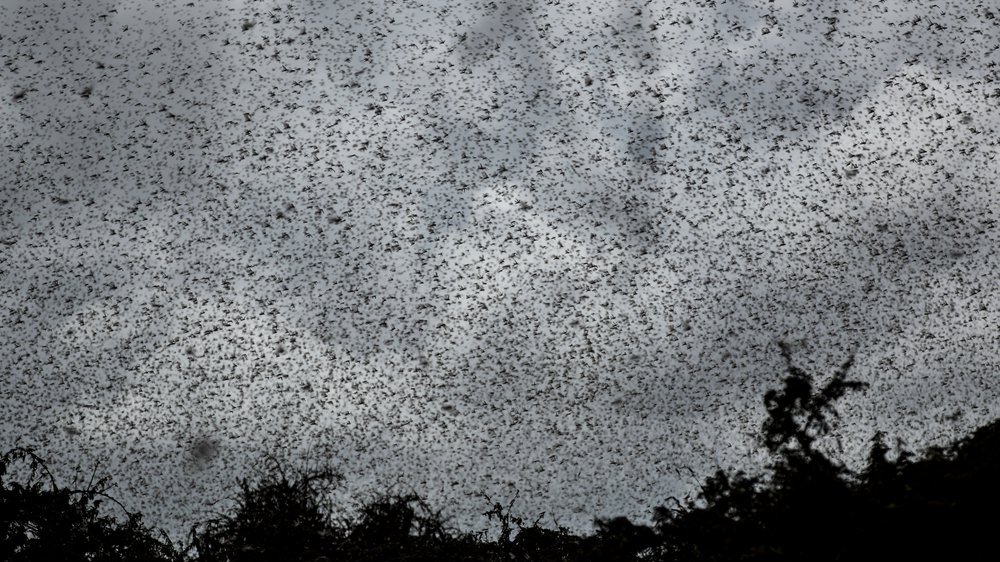 Swarms of desert locusts fly up into the air from trees in Katitika village, Kitui county, Kenya, January 24, 2020. /AP photo

Swarms of desert locusts fly up into the air from trees in Katitika village, Kitui county, Kenya, January 24, 2020. /AP photo

The last major outbreak on the continent happened between 2003 and 2005, which costed nearly 500 million U.S. dollars, 90 million of which were spent in food aid distributed to nations affected. Harvests losses were estimated at up to 2.5 billion U.S. dollars, according to FAO.

However, the real cost of an outbreak is much more profound than just monetary. A study based in Mali conducted in 2014 showed that children born in rural areas during the 1987-1989 locust plague were less likely to ever attend school. This phenomenon also affects girls more than boys, according to the study.

Scientists have proposed a variety of ways to manage locust outbreaks more effectively. One main strategy has been to monitor weather conditions through remote sensing technologies, such as satellite imagery, combined with ground survey to identify and eliminate breeding areas, according to Cressman.

Recently, drones have also been recruited in the fight against locusts.

They offer a number of advantages, including their ability to travel to dangerous, remote areas which had remained inaccessible to pest control teams due to harsh terrain or ongoing armed conflict.

Other factors such as land use also play a role in the life of locusts, according to Dr. Arianne Cease, director of the Global Locust Initiative at Arizona State University. Her research found grazing reduces nitrogen content of grasses, which provides a better environment for the insects to multiply and form swarms.

In the end, it comes down to our response in the next few months which will determine if the crisis worsens, according to Cressman.