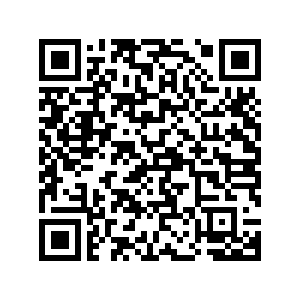 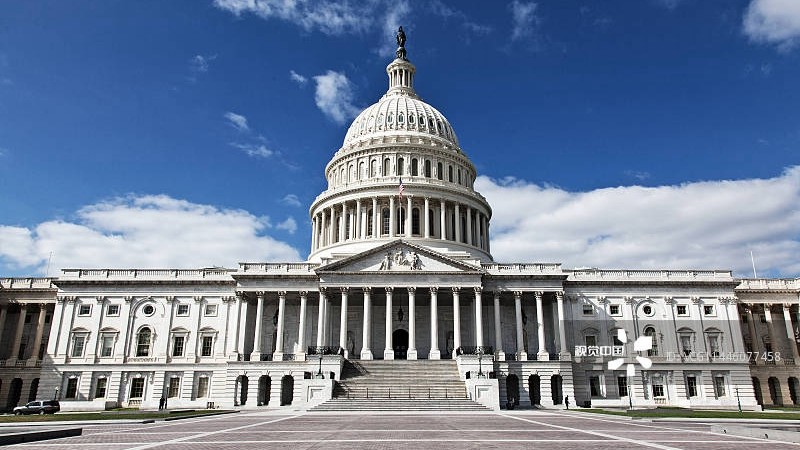 The fateful collision over whether U.S. President Donald Trump should be removed from office revealed the alarming fragility of the Constitution that Americans have relied on for more than 200 years to maintain their democratic system.

Nothing since the Civil War had so tested its viability. And the frightening lesson is that a determined president with a tight grip on his party and contempt for the rule of law can free himself of its constraints.

The U.S. Constitution's framers were brilliant, but they could see only so far into the future. They anticipated that a scoundrel or worse might occupy the presidency, but, though they anticipated "factions," they neither wanted nor believed there would be political parties, much less that parties would be instruments of a president's power.

In fact, until Trump, the United States had never had a president who maintained such a tight stranglehold on his party. Now that it does, the Constitution's provisions for removing the president – through impeachment by the House of Representatives and conviction by a two-thirds majority of the Senate – have been neutered.

Two factors explain Trump's hold over Republican members of Congress, many of whom are smarter than he is, don't like or even despise him, or consider him unfit for the office: his feral cleverness and his capacity for striking fear into potential opponents, either by turning loose his bewitched base on a dissident Republican or backing a primary challenger in the dissident's next election.

Every elected Republican is aware of former members of Congress who turned against Trump and are now out of politics. 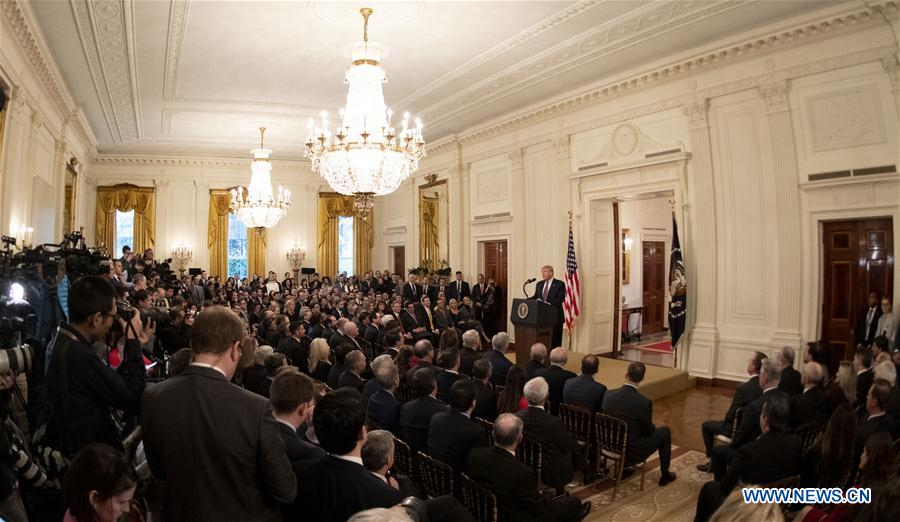 The first of two articles of impeachment adopted by the Democratic-controlled House in December was for abuse of power. The House accused Trump of withholding nearly 400 million U.S. dollars in congressionally-approved military assistance to Ukraine until that country's president, Volodymyr Zelensky, announced an investigation into Joe Biden, who then appeared to be a formidable challenger to Trump in November's presidential election, and into Biden's son, Hunter, for an alleged conflict of interest.

Trump's unprecedented blanket resistance to cooperating with the House Democrats' impeachment inquiry by refusing to provide witnesses or documents led to a second article of impeachment, for obstruction of Congress.

The conflict-of-interest accusation against Hunter Biden stemmed from the fact that he had served on the board of a corrupt Ukrainian natural gas company at the same time that his father was responsible for the Obama administration's Eastern Europe policy.

In fact, Trump didn't demand an actual investigation; he simply insisted that one be announced. In holding up aid to an ally under military attack by Russia, in exchange for a chance to smear his possible re-election opponent, Trump defied the advice of his most senior policy aides, including his hawkish national security adviser, John Bolton. (Trump also wanted an investigation into a Kremlin-originated fantasy that it was Ukraine, not Russia, that had interfered in the 2016 presidential election.)

Court challenges to Trump's refusal to cooperate with House impeachment investigators might well have taken the process up to or past November's election.

This put House investigators in an awkward position: the team of House prosecutors in the Senate trial insisted there was sufficient evidence, even in the White House's altered transcript of Trump's call to Zelensky last July, that the president had demanded a quid pro quo. So, the president's defense team insisted, why were House prosecutors calling for more witnesses and documents?

Trump's legal defenders neglected the fact that damning information had come to light following the House impeachment votes. They overlooked credible newspaper reports that Bolton's forthcoming book contains revelations that buttressed the House Democrats' case, or that the reason the House hadn't heard certain witnesses was because Trump had blocked them.

Other defense arguments – for example, that Trump's pressure on Ukraine stemmed from the president's sudden passion for rooting out corruption in that country – were risible. 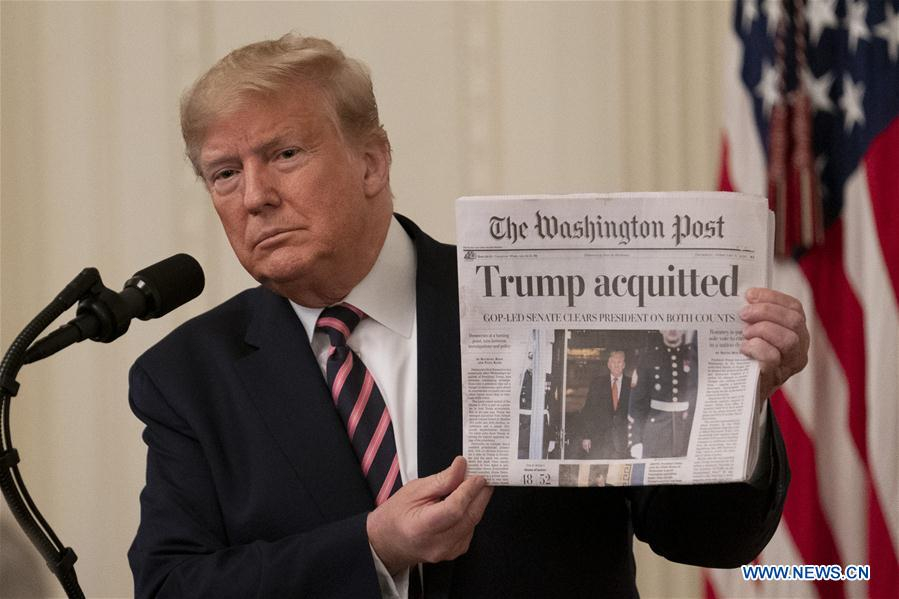 U.S. President Donald Trump holds up a copy of The Washington Post at the White House in Washington D.C., the United States, February 6, 2020. /Xinhua Photo

U.S. President Donald Trump holds up a copy of The Washington Post at the White House in Washington D.C., the United States, February 6, 2020. /Xinhua Photo

The most terrifying claim by the president's defenders, made by former Harvard Law School professor and prominent appellate defense lawyer Alan Dershowitz, was that if a president believes his reelection is in the public interest, what he does to advance that goal isn't impeachable.

Dershowitz later claimed that he was being "theoretical." But this opinion is consistent with Trump's publicly stated view that under the Constitution's Article II, which establishes the presidency and its powers (note that Congress comes first), "I have the right to do whatever I want as president."

In binding themselves to Trump, Senate Republicans took the risk that embarrassing new information would emerge after they had voted to acquit him. They climbed out on a limb with him, knowing that the limb might break. That risk persists.

My own view, inevitably controversial among those who believe that Trump is guilty of the charges for which the House impeached him – and of others for which it didn't – is that the resolution of the president's violation of his constitutional duties ended the right way: in the Senate's refusal to convict the president.

The Constitution's framers were correct that something as drastic and traumatic as removing a president from office shouldn't be done without a strong national consensus – inferentially, a bipartisan agreement – behind it. The existence of such a consensus is why Richard Nixon understood that he would be convicted and removed from office if he didn't resign the presidency.

The Senate's narrow vote (52-48) to acquit Trump was no surprise. Mitt Romney, the sole Republican to vote to convict, split the baby by voting not guilty on the obstruction-of-Congress charge.

Romney – one of two Senate Republicans to vote in favor of calling witnesses (the other was Susan Collins of Maine) – anticipated in his dramatic Senate speech explaining his vote to convict that it would subject him to attacks by a vengeful president and his spiteful allies. Romney was correct; one of the first attacks came from Donald Trump, Jr.; the president was soon to follow.

Still, Trump is impeached and his presidency permanently scarred. The House's lead prosecutor, Adam Schiff, was probably correct that Trump, once acquitted, would likely go further in undermining the integrity of the coming presidential election.

Shortly before the final vote in the Senate, Trump was reported by aides to be feeling "invincible" – and drawing up a list of people who should be prosecuted. There's now a real question as to whether the impeachment clause, the Constitution's failsafe against a commander in chief who abuses his power, can work under a strong and belligerent president.

More than at any time in modern history, U.S. democracy is in danger.