In The Spotlight: How are farmers living amid coronavirus outbreak?
By Wang Xiaonan, Yu Jing, Wang Yan 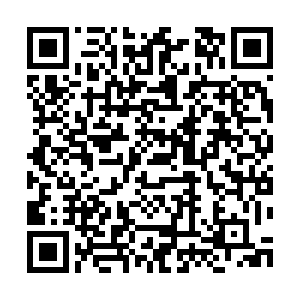 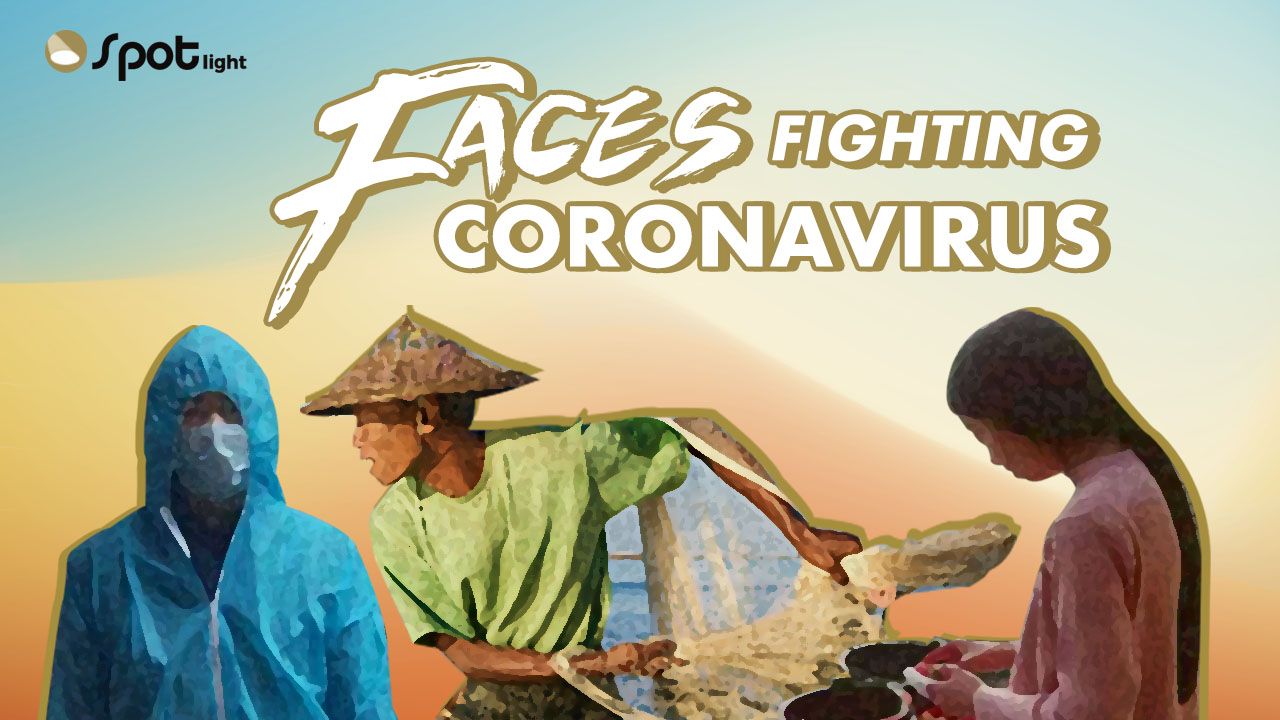 Editor's note: It's a hard time for everyone, with the coronavirus outbreak showing few signs of abating. This has caused fear and wrath while testing the resilience and empathy of many people. In this life-and-death battle, some are working relentlessly to save lives, some are stuck at home overloaded by the barrage of real-time information, while others are struggling to make a living despite the risks.

In this series "Faces Fighting Coronavirus," we take a look at people from different walks of life who are affected by the outbreak as well as those who are trying to keep their lives as normal as they can to keep our society running.

Our first episode focuses on how farmers are faring during the coronavirus outbreak.

For 21-year-old Zhang Haomin, this Spring Festival has been one of the grimmest for her family business in more than 20 years. "Every Lunar New Year holiday is the peak season for selling fruits, but things changed a lot this year," she told CGTN.

Zhang resigned from her job in Beijing just before the festival and came back to her hometown in Shunping County in Baoding, a city in northern Hebei Province. Her home village Wulang has a history of strawberry farming, and most villagers make a living that way. But an abundant harvest last year only fueled their worries.

"Usually we can make ends meet for all the cost in a year during this festive time, but things don't look so good this year." Having grown strawberries for over two decades, her family has five big greenhouses. "Once we pick [the strawberries], they will rot quickly," she said.

Because of the coronavirus outbreak, Wulang was hunkered down on the second day of the 2020 Lunar New Year to reduce the risk for the villagers to get infected. 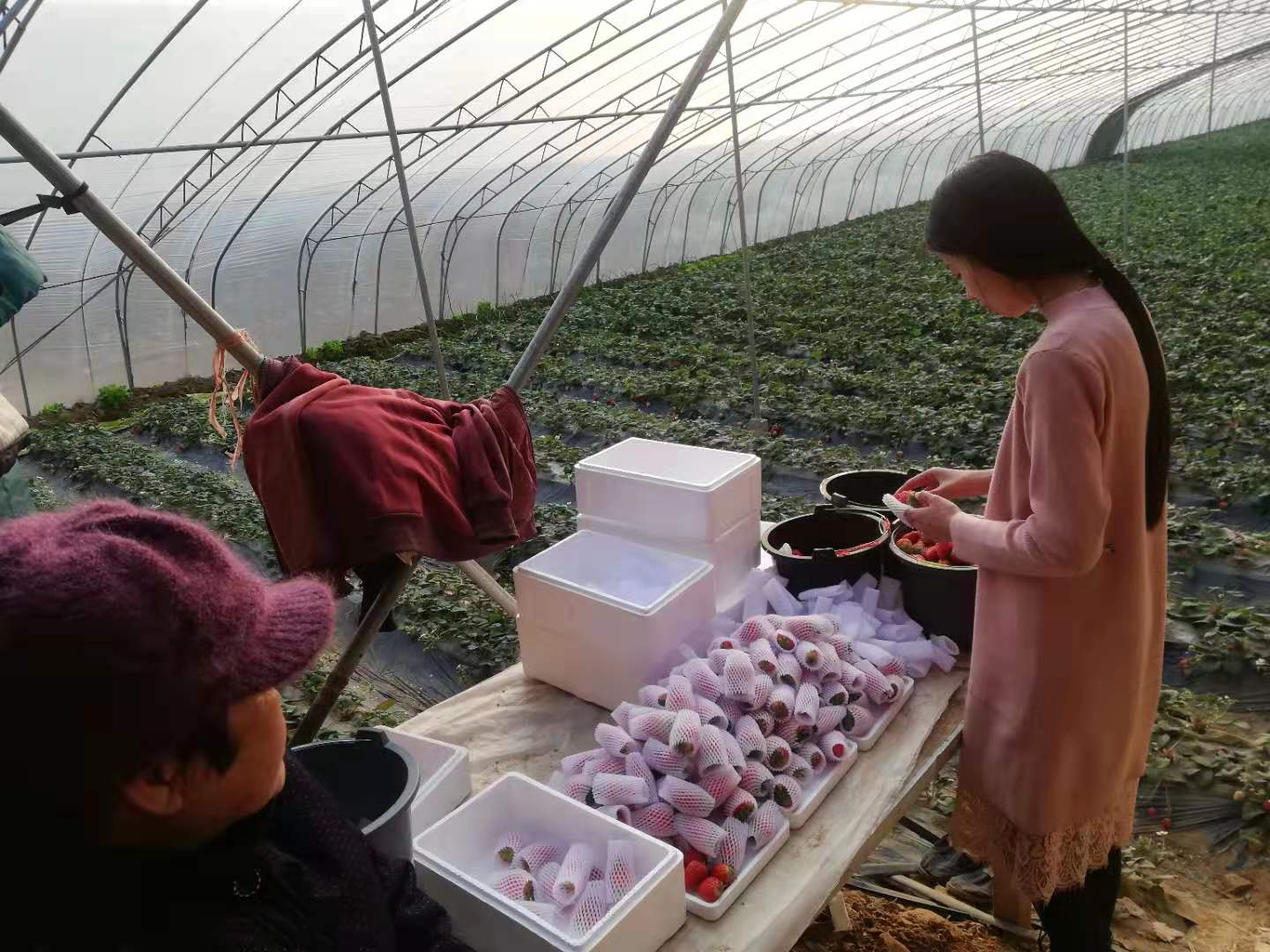 On the first day of lockdown, Zhang's family lowered the price of the fruit from 50 to 16 yuan per kilogram, but since her grandfather couldn't leave to sell the strawberries in town nor bring them to vendors, their efforts have seen little success.

So Zhang resorted to something that her family hasn't tried before – selling online. She began selling the strawberries on WeChat Moments and then opened an account on an app called Xianyu, Alibaba's e-commerce platform for selling second-hand goods. "Some 60 percent of customers just come to support me as they heard farmers are in a difficult time over the outbreak," said Zhang, adding that most of the buyers are her former colleagues in Beijing. They're even introducing her to new customers. "They make me feel warm during this bleak season."

But cordoned off roads pose a tremendous logistical challenge. She could only send off strawberries to customers living in Beijing, Tianjin, and Hebei as it now takes four times longer than usual to ship to places outside of the region.

Turning ripened strawberries into canned jelly is another way to keep them from piling up and rotting.

Zhang and her strawberry planting neighbors aren't the only farmers left out in the cold amid the outbreak. 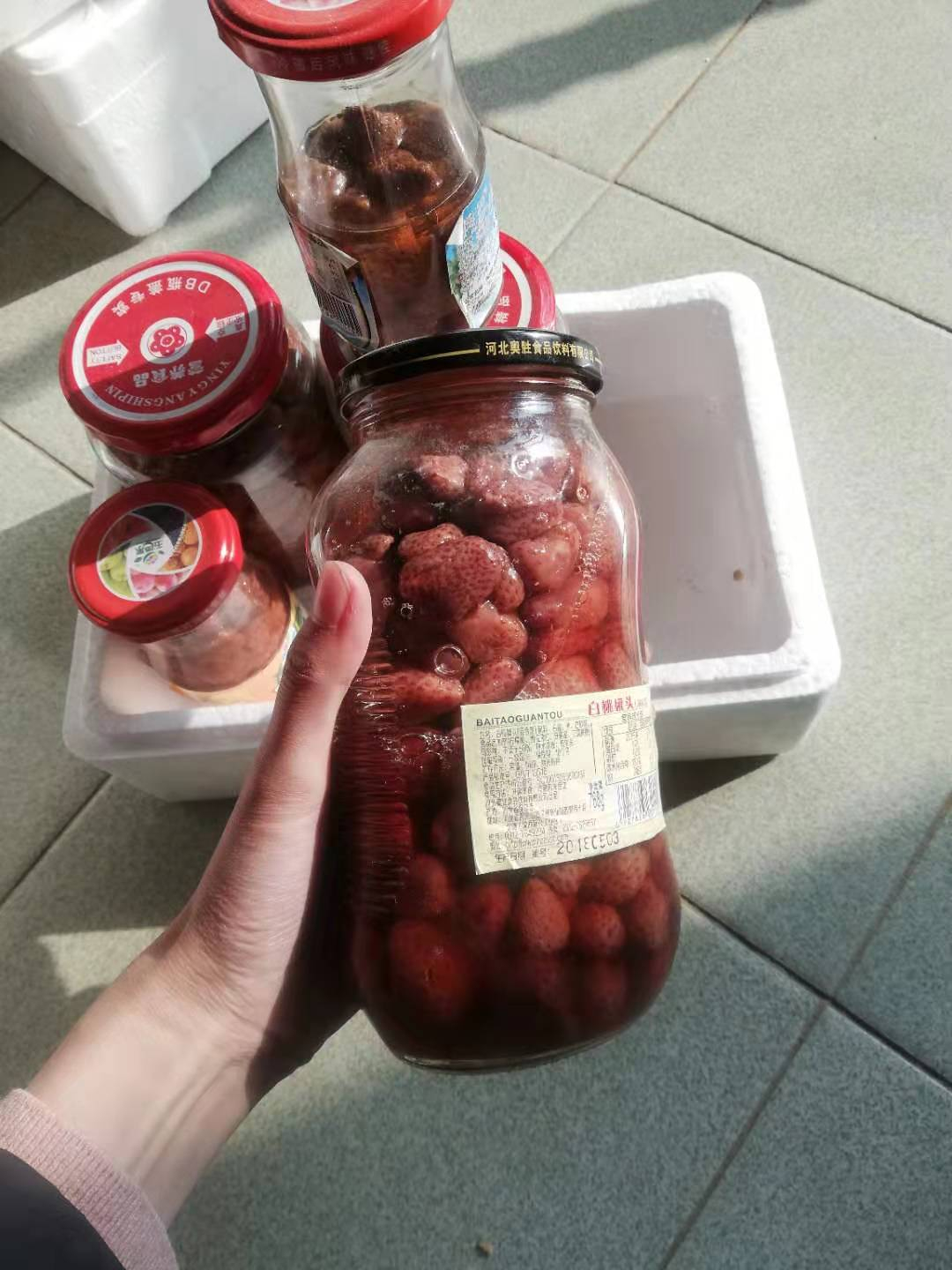 Yu Junhua, a pig breeder from Dongying in coastal Shandong Province, said his pigs would soon run out of feed due to the traffic restrictions. His town – Xihua – has sealed off all outbound roads.

In order to pick up the animal feed from a nearby city, he has to apply for a transit pass to cross the checkpoints. But there are no clear guidelines from the municipal government on how to apply for the pass, nor is there any guarantee that he will get a pass even if he applies.

With assistance from an animal feed factory, Yu managed to secure a transit pass to the nearby city of Binzho, but he was then informed that most feed factories in the city had been closed down due to a lack of raw materials. Though Shandong is a major corn producer, soybean meal – another crucial element in animal feed – needs to be sourced elsewhere. And with major routes shut down, the supply can't keep up with the surge in demand.

With only five days of feed left for his pigs, Yu said he planned to feed corn to his herd so that they won't starve to death. But this is no long-term solution: Pigs that eat nothing but corn grow slower and are likely to get sick. 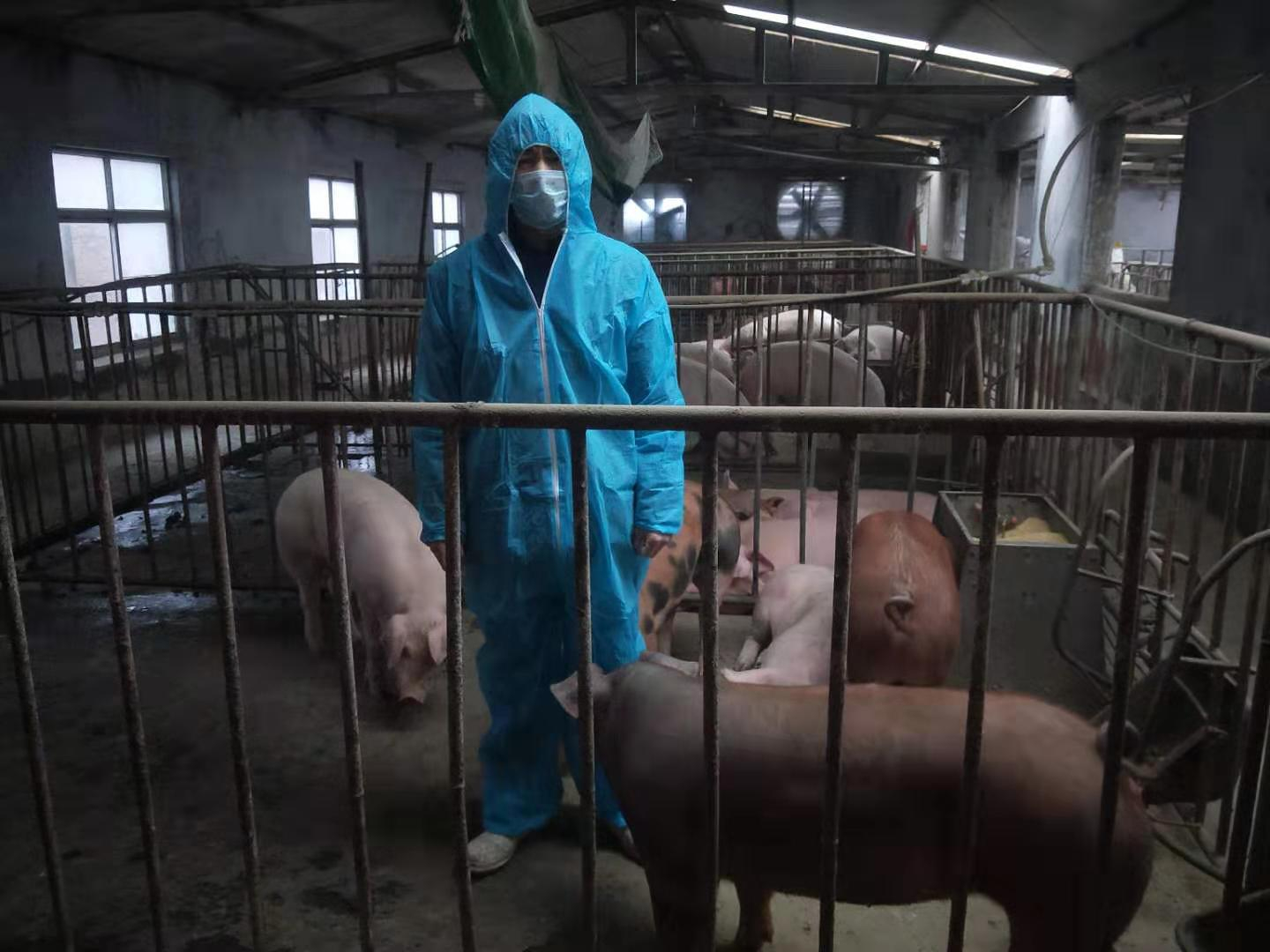 Yu suffered a devastating loss last year due to the African Swine Fever (ASF) – two-thirds of his herd was gone. The coronavirus outbreak is now dealing with another heavy blow, but Yu said the damage was more manageable compared with the ASF.

"With the ASF, one could go bankrupt overnight," Yu told CGTN. "At least the coronavirus didn't kill the pigs."

Inside Yu's village, strict disinfection measures were implemented at the pig farms: Every household is required to report its family members' travel history, and those who had been to Hubei Province would be quarantined immediately. Across the village, instructions on how to avoid the coronavirus are regularly broadcasted from loudspeakers.

Yu was hopeful that traffic restrictions would be eased for pig farmers like him, who sustain the country's food supply. The Ministry of Agriculture and Rural Affairs issued a notice on Tuesday that free passage of delivery trucks carrying animal feed and poultry should be protected. But the exclusion of aquatic products makes Li Chuang a little bit disappointed. 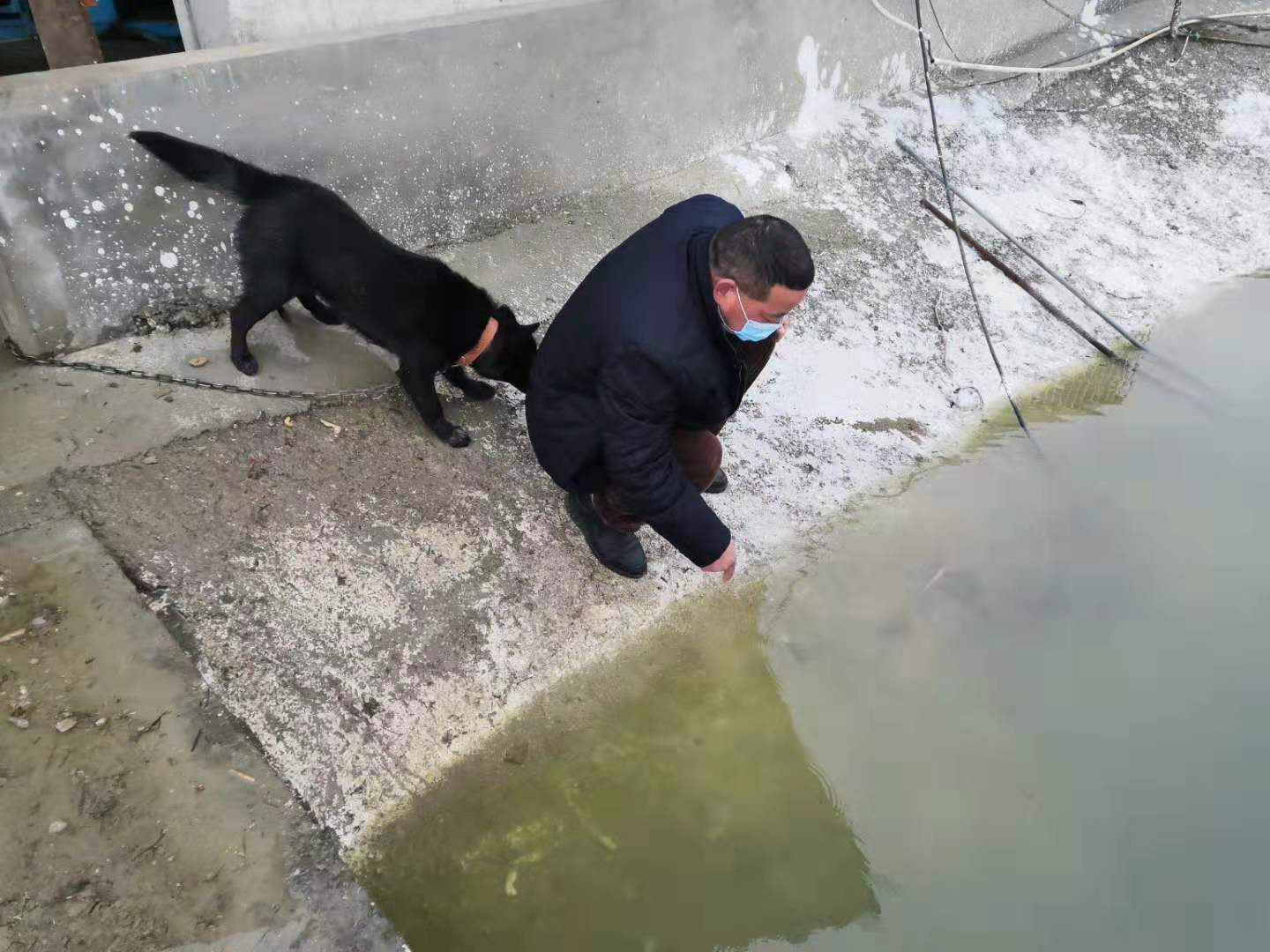 In east China's landlocked province of Anhui, which borders Hubei to the west, Li, a self-employed fisherman at Fukang Aquaculture Cooperative in Fuyang's Taihe County, is facing more challenges.

"Two trucks of my fish were pulled over at a checkpoint on the road from Bozhou to Fuyang," Li told CGTN in a phone interview.

Given the quarantine measures taken as a result of the coronavirus outbreak, transportation has been gravely affected. The government has opened "green channels" for farm produce transportation in order to protect farmers, fishermen and to ensure daily food supply for consumers. Farmers can apply for a transportation permit from the local transportation department but villagers are nervous. "Didn't Zhong Nanshan encourage people to stay home?"

Affected by the outbreak, live poultry and seafood markets in many places were shut down. Plus, Banquets and wedding ceremonies typical of the Lunar New Year in rural areas were all canceled. A few supermarkets still in operation can only relieve part of the inventory.

"We can no longer set up a stall at bus stations. I lost hundreds of thousands of yuan in revenue in the past month," Li said. 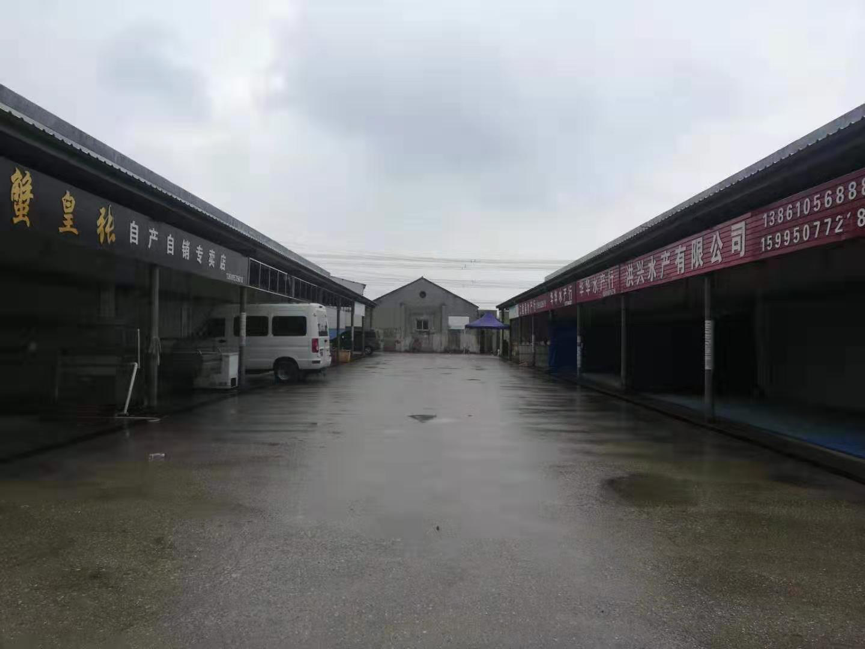 For fishermen such as Li, who's been in the fish fry business for 10 years, spring is the prime season. However, it's been difficult distributing the fry across counties due to travel restrictions, as well as finding workers who can help put the fry into the fishponds before it gets warmer. Fry survival would usually be low at higher temperatures.

Because of the difficulties in bulk goods transportation, the agriculture bureau of Yixing in east China's Jiangsu Province suggested that fishermen increase door-to-door sales of aquatic products through community group purchases. Some fishermen have started selling aquatic products on WeChat, and many fishermen have resorted to professional logistics companies such as SF Express to transport their products.

"We are encouraging fishermen to sell online," said Mao. "If all these stocks are left here, it may cost tens of millions of yuan – that's the worst-case scenario." However, Mao, who has been working on mitigating the damages caused by the coronavirus outbreak on aquaculture since January, is optimistic. "But hopefully, that couldn't be the worst-case scenario."