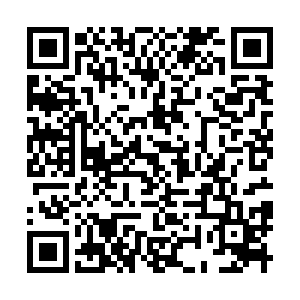 Slammed for failing to nominate female directors and only recognizing one person of color in its acting categories, this year's Oscar ceremony took pains to show it could be inclusive and was somewhat vindicated by a historic best picture win for South Korean movie "Parasite."

Singer Janelle Monae set the tone for the evening, singing in her opening number: "The Oscar is so white!"

"We celebrate all the women who directed phenomenal films. And I'm so proud to stand here as a black queer artist telling stories. Happy Black History Month!," she went on.

Comedians Steve Martin and Chris Rock, both of whom have hosted Oscars in the past, also pointed out the lack of nominated female directors and made a dig at how the Oscars have moved with the times.

"Back in 1929: there were no black nominees," noted Martin. "And today we've got one!," quipped Rock. "Amazing growth," concluded Martin.

Immediately after this year's nominees were announced on January 13, criticism arose over the lack of diversity in the main categories. Out of 20 nominated actors, only one – Cynthia Erivo – was black. None were Asian or of a different ethnic background.

There was special outrage over the fact that "The Farewell," a critically acclaimed Chinese-American family drama nominated for Golden Globes, British BAFTAs and Critics' Choice awards, had failed to get a single nod from the Academy of Motion Picture Arts and Sciences (AMPAS). Other notable snubs included actress Jennifer Lopez in "Hustlers" and Eddie Murphy  in "Dolemite is my Name." 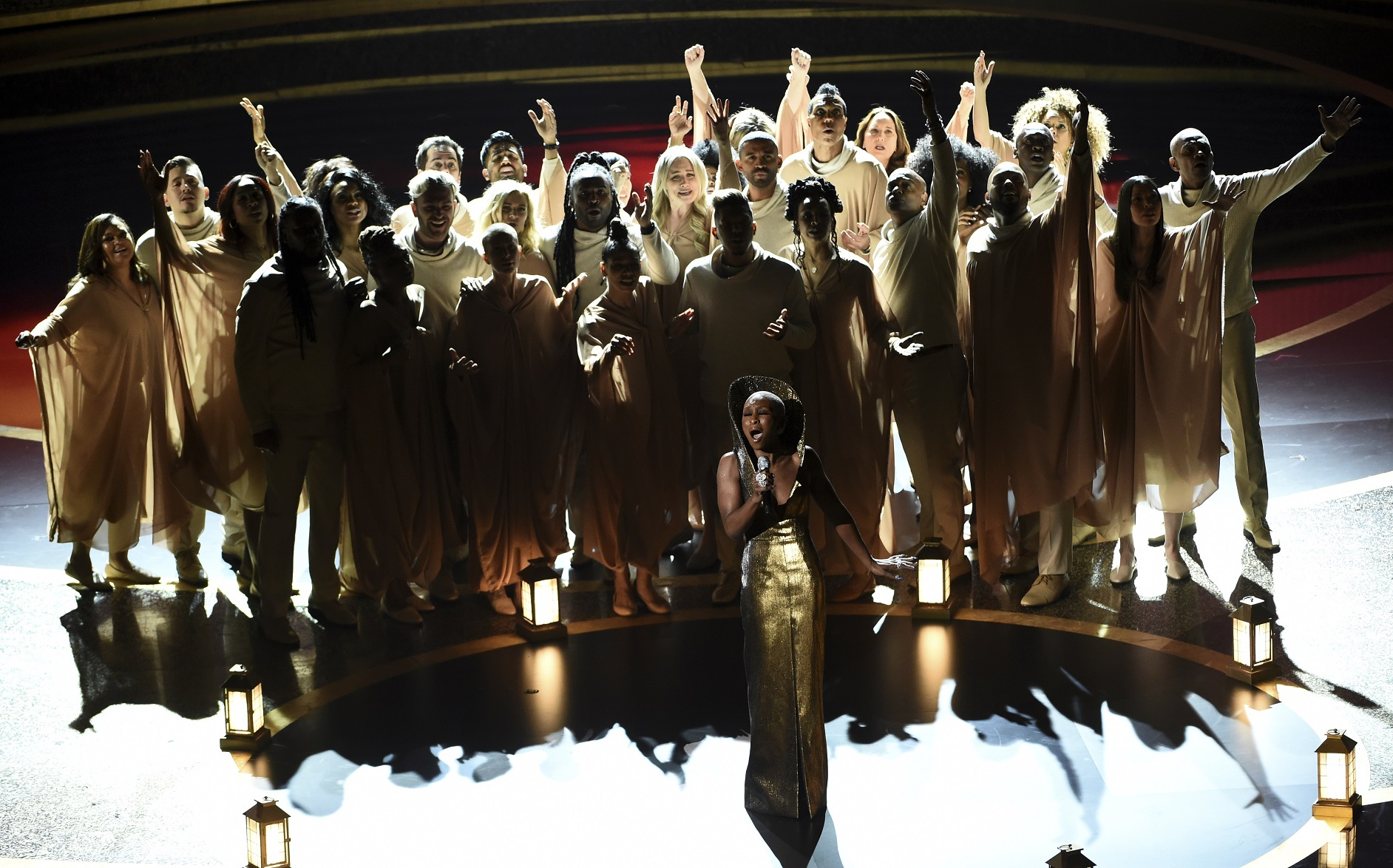 Cynthia Erivo performs the nominated song "Stand Up" from the film "Harriet" at the 92nd Academy Awards at the Dolby Theatre in Los Angeles, February 9, 2020. /AP Photo

Cynthia Erivo performs the nominated song "Stand Up" from the film "Harriet" at the 92nd Academy Awards at the Dolby Theatre in Los Angeles, February 9, 2020. /AP Photo

In 2015, the hashtag #OscarsSoWhite started trending on social media after not a single person of color was nominated in the acting categories – arguably the most high-profile awards, alongside Best Film and Best Director.

A year later, nothing had changed, but a special push to be more inclusive in 2017 saw seven actors of African-American, Asian or Caribbean descent among the 20 acting nominees. Two of them went on to win. Numbers dropped over the next two years, but this year's lack of diversity – not only among the actors but in the type of movies nominated – saw a revival of #OscarsSoWhite, alongside the newer #OscarsSoMale.

Only one woman has ever won an Oscar as director – Kathryn Bigelow for "The Hurt Locker" – and only five have been nominated in the awards' 92-year history. This year's snubs included Lulu Wang for "The Farewell", Greta Gerwig for "Little Women" and Lorene Scafaria for "Hustlers."

With this hanging over their heads, the producers of Sunday's Oscar ceremony made sure to make the show as diverse as possible, with hosts and presenters repeatedly addressing the elephants in the room.

In a rap recap halfway through the show, actor Utkarsh Ambudkar, who is of South Asian descent, addressed "a bunch of nominees that don't look like me." 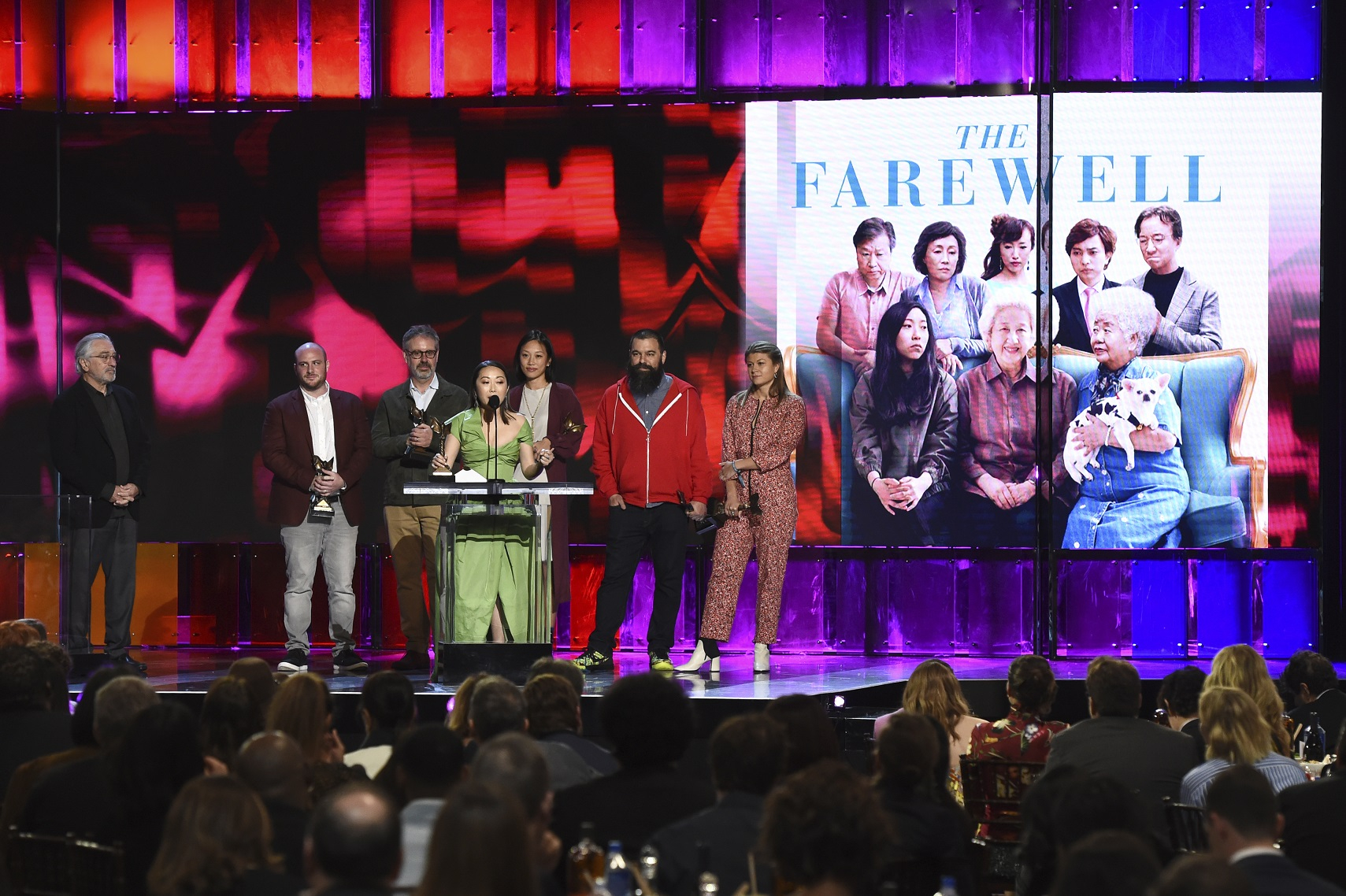 "Spent a long time trying to be color blind, what you're seeing right in front of you is a sign of the times," he rapped, before concluding: "Keep an open mind, I'm sure we'll find that there's plenty of light here for us all to shine."

This year's line-up of presenters was possibly the most diverse in recent memory, with the likes of Keanu Reeves, Salma Hayek, Penelope Cruz, Sandra Oh, Mindy Kaling, Lin-Manuel Miranda, Zazie Beetz, Kelly Marie Tran and Anthony Ramos. Monae performed her opener with entertainer Billy Porter, and the show also featured musician Questlove and a gospel choir performing alongside Erivo during her rendition of nominated song "Stand Up."

This did little to placate fans.

The South Korean movie's victory "highlighted the Academy of Motion Picture Arts and Sciences' scramble to diversify its voting ranks," the New York Times wrote, noting that the Academy invited over 840 new members from 59 countries to join its ranks last year.

The best foreign language film category was also changed to "Best International Feature Film" this year, in an effort to be more inclusive and drop the word "foreign."

Asia for the win!

After the landslide victory, a new hashtag began trending on Twitter but one with a more positive spin: #OscarsSoKorean.

"Parasite" wasn't the only winner with an Asian connection on Sunday night. "American Factory," a look at a Chinese-run factory set in Ohio and the cultural differences between Chinese and American workers, won the Oscar for Best Documentary Feature.