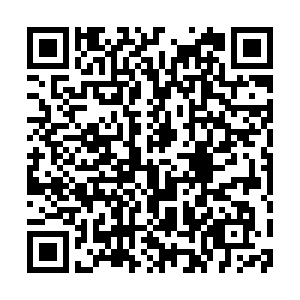 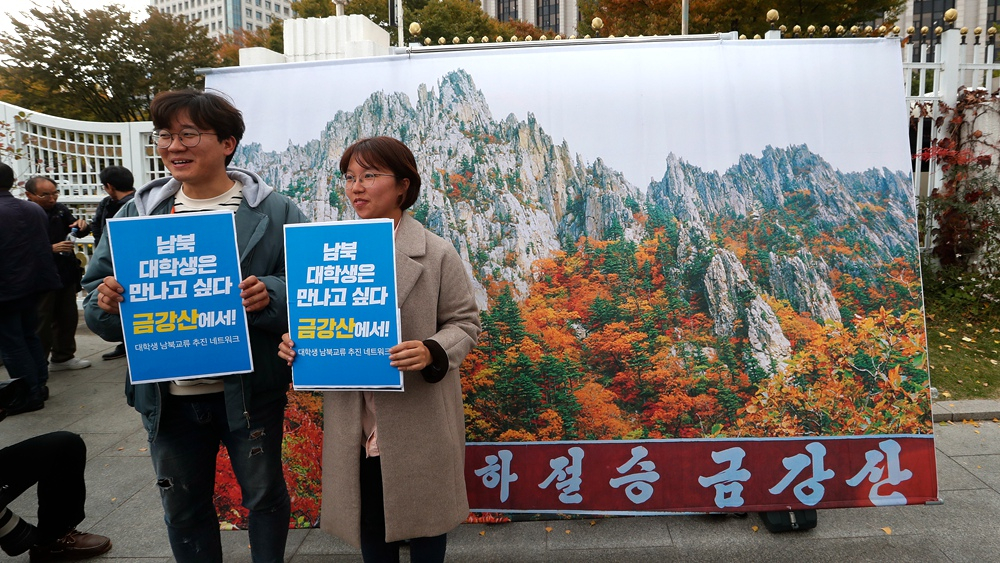 Protesters pose with an image of DPRK's Mount Kumgang during a rally calling for the resumption of Mount Kumgang tourism in Seoul, ROK, October 28, 2019. /AP Photo

Protesters pose with an image of DPRK's Mount Kumgang during a rally calling for the resumption of Mount Kumgang tourism in Seoul, ROK, October 28, 2019. /AP Photo

A working group meeting between the United States and the Republic of Korea (ROK) was held in Seoul on Monday to coordinate policy on Pyongyang, as the ROK pushes to allow individual trips to the Democratic People's Republic of Korea (DPRK) to boost inter-Korean exchanges, according to a report by ROK's Yonhap news agency.

Issues related to fighting the novel coronavirus outbreak could also be on the agenda, the report said.

It is the U.S.-ROK working group's first meeting since May. The two sides are expected to discuss Seoul's push for inter-Korean exchanges amid the prolonged deadlock in U.S.-DPRK nuclear talks, which have stalled since a fruitless summit between U.S. President Donald Trump and DPRK leader Kim Jong Un in Vietnam's Hanoi almost a year ago.

The DPRK has threatened to resume nuclear weapon and ballistic missile tests if the U.S. refuses to ease sanctions. 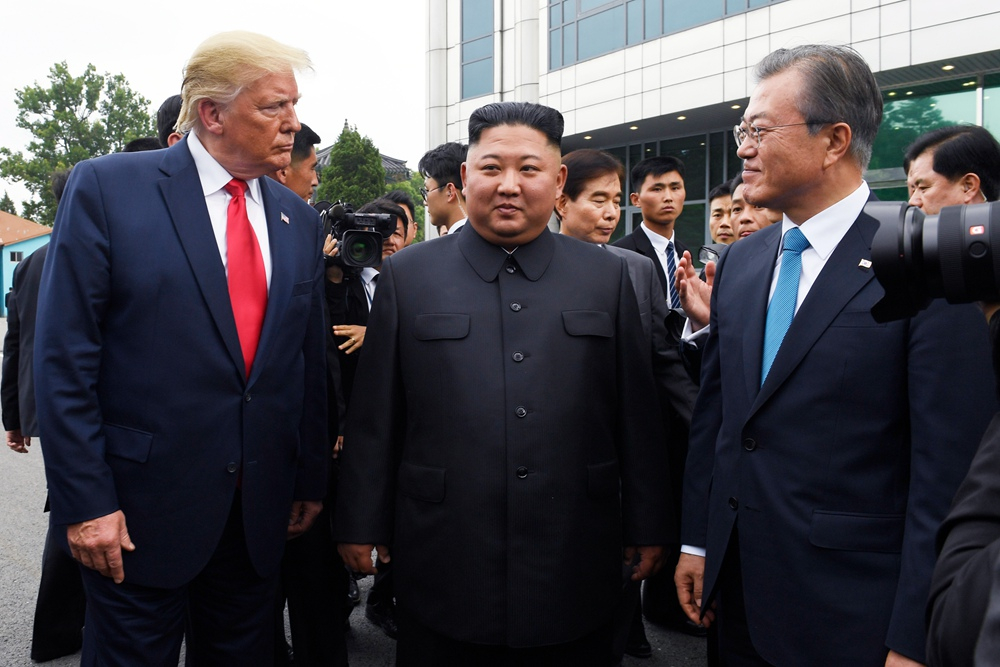 Tourism is not subject to international sanctions imposed over DPRK's nuclear and missile programs, and the proposals are designed to avoid breaching UN bans on bulk cash transfers and joint business ventures with the DPRK. Seoul said the U.S. knows of its plans.

"We will continue to seek ways to expand cross-border relations in the fields of tourism, which North Korea (the DPRK) has been focusing on, and railways and roads that connect land and sea, as well as the two Koreas, in the Demilitarized Zone and border areas," Kim told a forum in the eastern provincial county of Pyeongchang.

"It's time that we started sustainable exchanges and cooperation that will remain undaunted under any kind of circumstances," he said. "If we help each other and overcome obstacles together, the road to peace will be closer by that much." He also reiterated the ROK's desire to push for co-hosting the 2032 Summer Olympics with the DPRK.

Pyongyang previously criticized Seoul for lackluster progress after the leaders agreed to restart economic cooperation in 2018.

China has repeatedly expressed support for inter-Korean exchanges and dialogue between the U.S. and the DPRK, urging both sides to meet each other halfway. 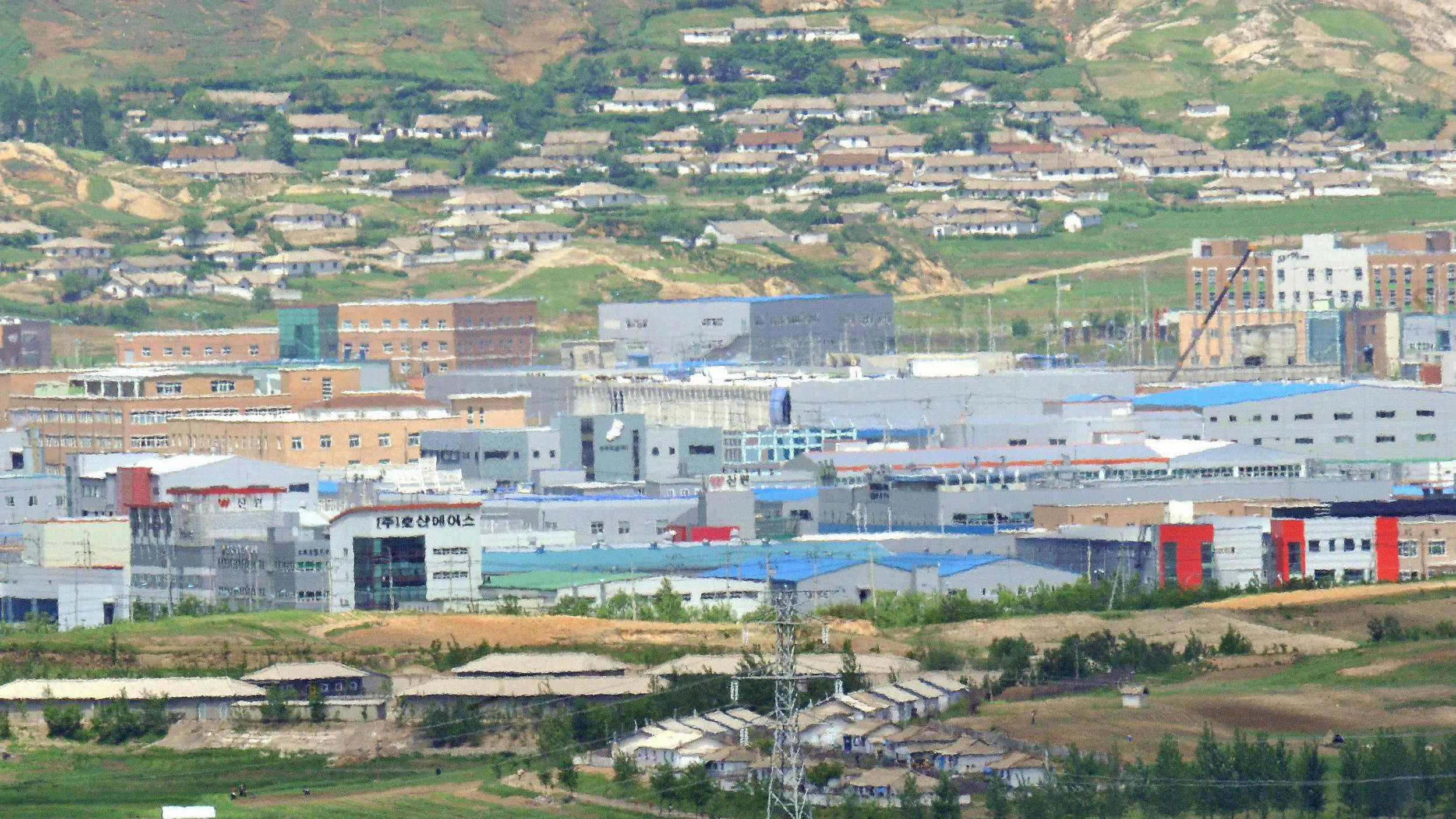 File Photo: The inter-Korean industrial complex of Kaesong seen from a ROK observation tower in Paju near the Demilitarized Zone separating the two Koreas. /VCG Photo

File Photo: The inter-Korean industrial complex of Kaesong seen from a ROK observation tower in Paju near the Demilitarized Zone separating the two Koreas. /VCG Photo

Seoul also called for the reopening of the shuttered Kaesong Industrial Complex as a means to improve inter-Korean relations and ensure the lasting peace on the Korean Peninsula.

The complex was shut down in 2016 by the ROK in retaliation against DPRK's nuclear tests.

Moon and Kim agreed in their summit last September to resume the operation of the Kaesong complex when conditions are satisfied, but efforts to resume the complex since then have made little progress amid a protracted stalemate in denuclearization talks.

Washington, however, is concerned that the resumption of the complex, would undermine the global sanctions regime as such projects would provide Pyongyang with their badly needed hard currency.