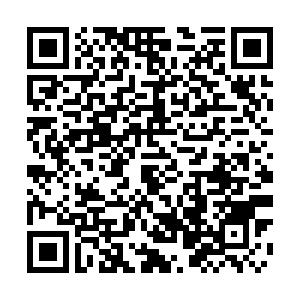 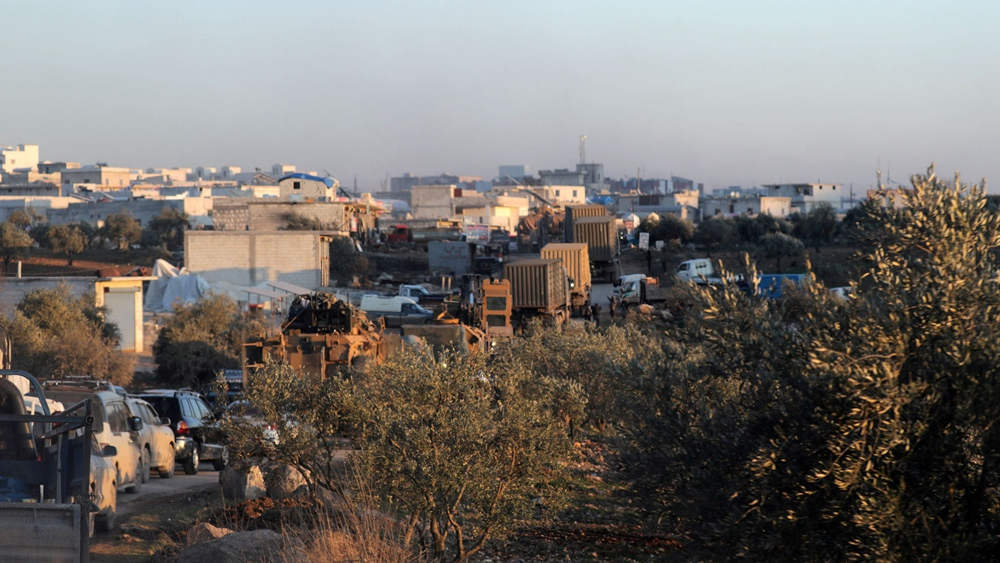 Turkey on Monday urged Russia to fulfill its responsibilities in the Astana process that aimed at a ceasefire in Idlib Province of Syria, the Turkish presidential spokesperson said.

A visiting Russian delegation held the first round of talks with Turkish government on Saturday and continued discussions over the recent escalation of tension in Idlib on Monday.

The latest situation in Idlib has been discussed, said a written statement released by Kalin's office.

The military attack carried out by the Syrian government forces at Turkish observation points was strongly condemned, said the statement, adding that the Turkish military would respond within the framework of the right of self-defense against the attack.

Turkish backed fighters prepare to go to the front line in the Syrian province of Idlib, February 10, 2020. /AP Photo

Turkish backed fighters prepare to go to the front line in the Syrian province of Idlib, February 10, 2020. /AP Photo

Turkey has stressed to Russia that the attack against the Turkish soldiers was unacceptable, and that the Turkish army has responded in the hardest manner and will continue to retaliate, said the statement.

Turkey emphasized the need to stop these attacks which were contrary to the spirit of the Astana deal and violated the Sochi consensus, and Russia, one of the guarantors of the agreement, should fulfill its responsibility, it added.

Ankara expressed its determination to respond and take every kind of measures against attacks that aim at harming the political process, said the statement.

In the process, the army besieged some of the Turkish observation points that were set up in rebel-held areas to observe a short-lived de-escalation zone deal agreed upon between Russia and Turkey.

The Syrian shelling targeted Taftanaz Air Base in Idlib countryside as Turkey was amassing forces and started shelling Syrian forces as part of Ankara's plan to launch a wide-scale offensive to hinder the progress of the Syrian army in Idlib. 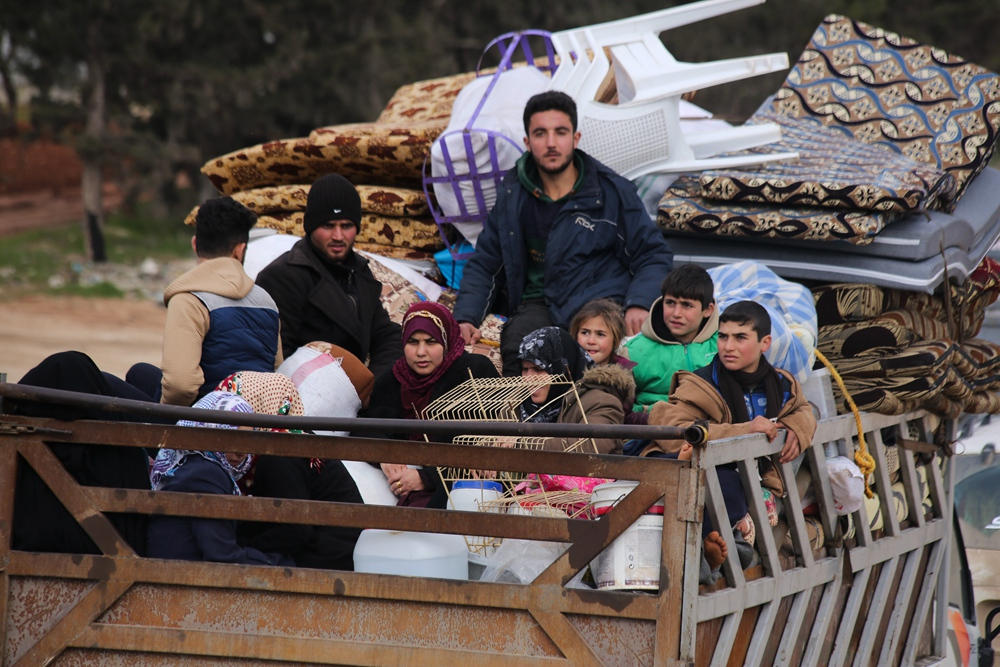 Syrian refugees head northwest through the town of Hazano in Idlib Province as they flee renewed fighting, January 27, 2020. /AP Photo

Syrian refugees head northwest through the town of Hazano in Idlib Province as they flee renewed fighting, January 27, 2020. /AP Photo 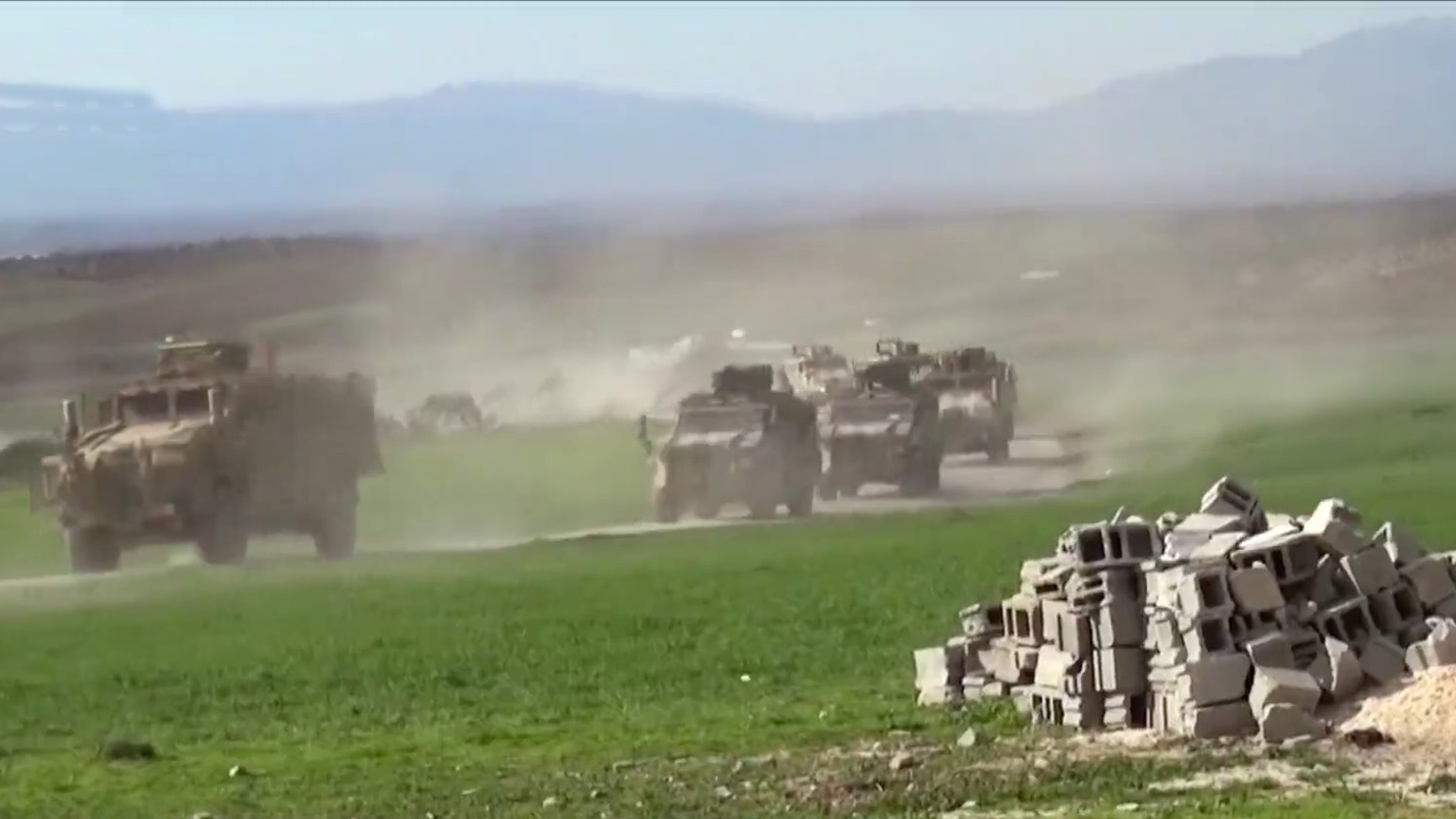 Turkish forces have hit 115 Syrian government targets and destroyed 101 of them in retaliation for an attack that killed five Turkish soldiers in Syria's rebel-held northwest, the Turkish Defense Ministry said on Monday.

The ministry said Turkish forces would continue to retaliate any attacks on its troops, which have observation posts in the far northwest of Syria. Earlier, the ministry said Syrian forces had killed five Turkish soldiers, among thousands deployed there to help stem a Syrian offensive to retake the last rebel stronghold in the country after nearly nine years of civil war.

"Up to now, 115 (Syrian) regime targets were immediately fired upon, and 101 regime elements were neutralized according to initial information from various sources," the ministry said in a statement. "It was found that three tanks and two mortar positions were destroyed, while one helicopter was also hit."