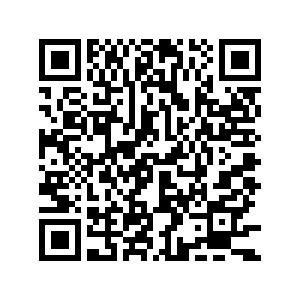 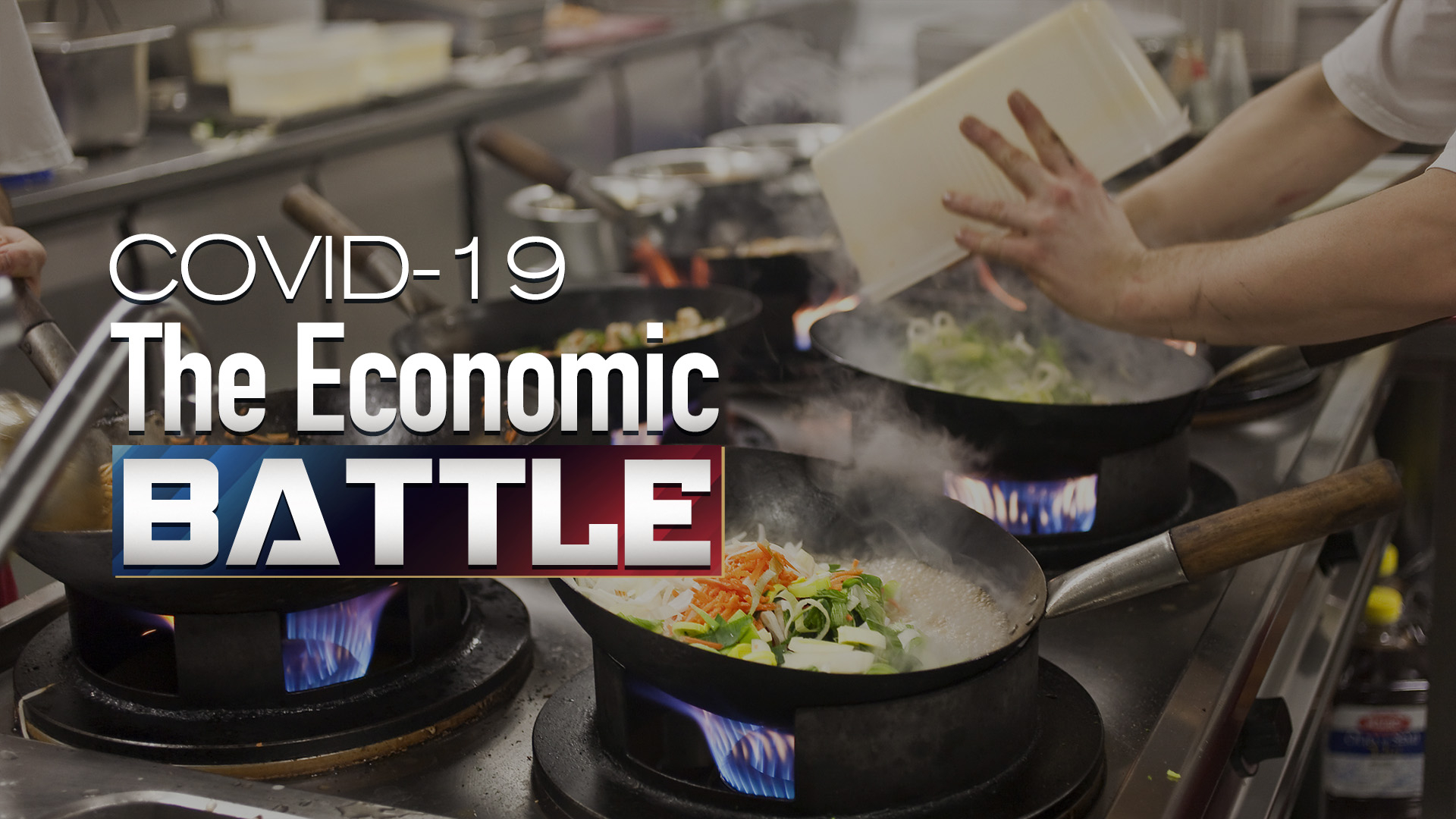 "Our cash flow has been seriously affected because of the epidemic," said a representative of Xibei, a Beijing-based restaurant chain. "We can only last for three months like this even if we pay our employees with the support of bank loans. Our more than 20,000 employees are on the brink of losing their jobs."

The popular chain that has more than 350 restaurants in 59 cities across China told CGTN Digital in a written interview that it has been struggling to maintain the business since the deadly novel coronavirus outbreak in central China's Wuhan in December last year and spread out across the country.

More than 60 percent of Xibei's restaurants have been closed since late January when the epidemic became serious, according to Xibei. The catering giant that claims an annual sales revenue of 6 billion yuan (860 million U.S. dollars) has seen its business revenue slump 87 percent year on year during the Chinese New Year holiday season. 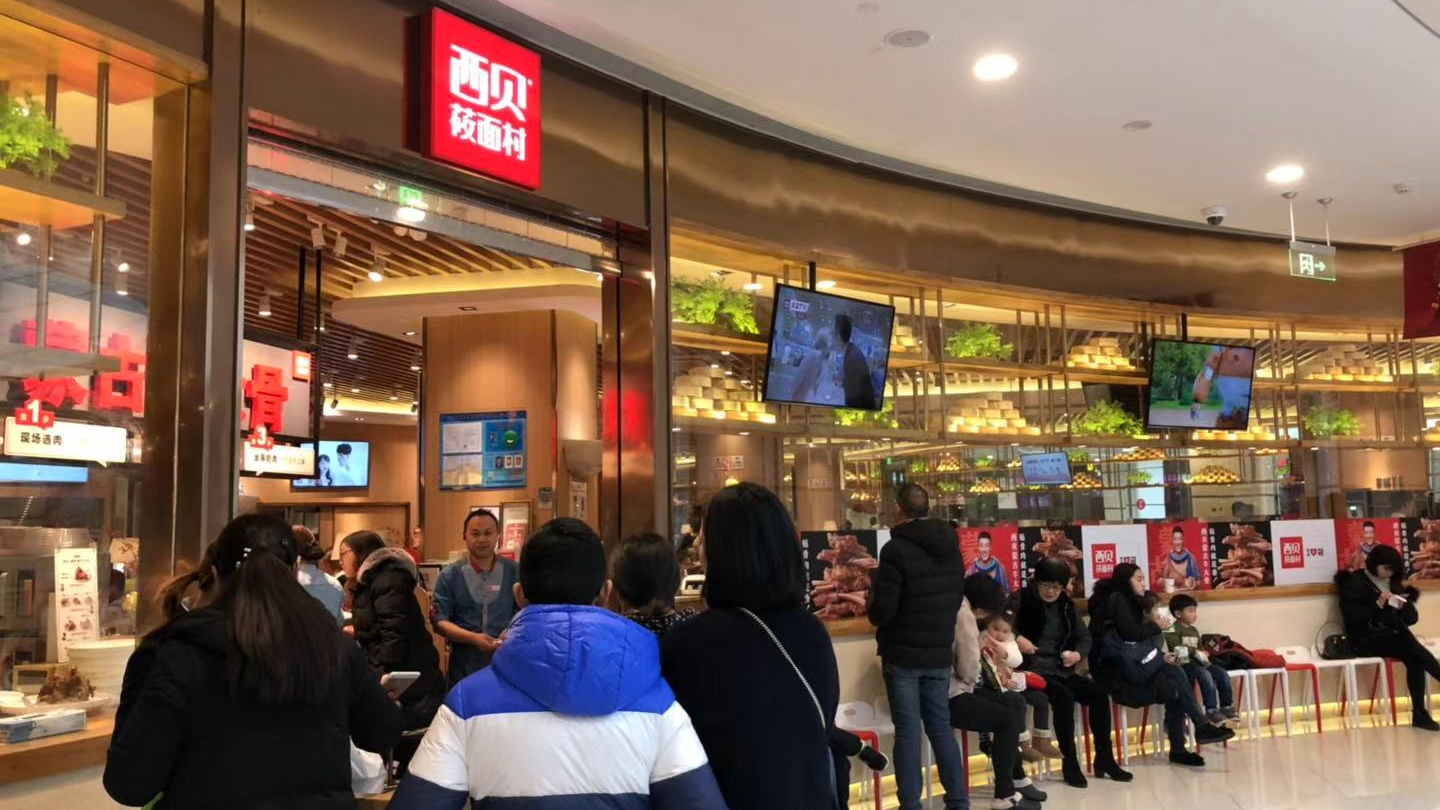 Xibei may not be the worst hit during the ongoing epidemic. Haidilao International Holding, the country's largest hotpot chain listed in Hong Kong's stock market, has kept all its 550 stores on the Chinese mainland closed since January 26 because of the epidemic. While it initially planned to reopen in 15 days, in a new statement earlier this month, it said its reopening time would be decided later.

Haidilao declined the interview request from CGTN earlier this month.

Moreover, Zhou Hei Ya International Holdings, another company listed in Hong Kong and known for its popular snacks made from various parts of duck, said in a statement on Tuesday that its nearly 1,000 stores nationwide have suspended operations because of the epidemic.

As the highly contagious virus spread out like wildfire, many people have opted to stay home to reduce chances of being infection. Catering has become one of the hardest hit industries in China, along with hotels, shopping, entertainment and tourism. 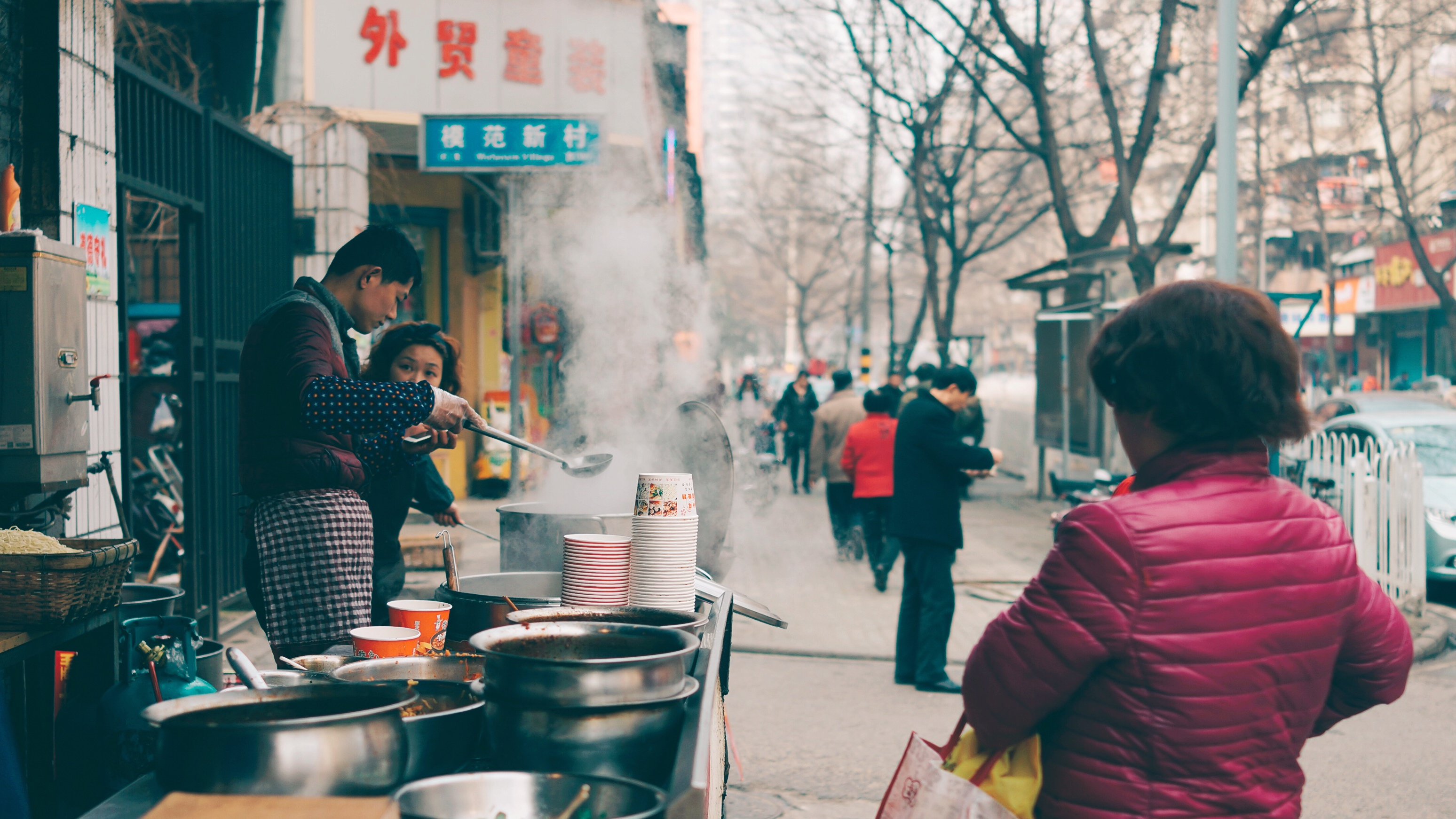 Catering industry relies heavily on cash flow. Xibei has to pay employees' wages and real estate rentals no matter its restaurants stay open or otherwise, and its income mainly comes from dining-in, the company told CGTN.

The labor cost accounts for one third of the company's expenses. The 2,000 people on its paycheck cost the company 156 million yuan each month, according to Xibei.

"The company lost 700 to 800 million yuan in revenue within a month around the Spring Festival," read a statement from Xibei. 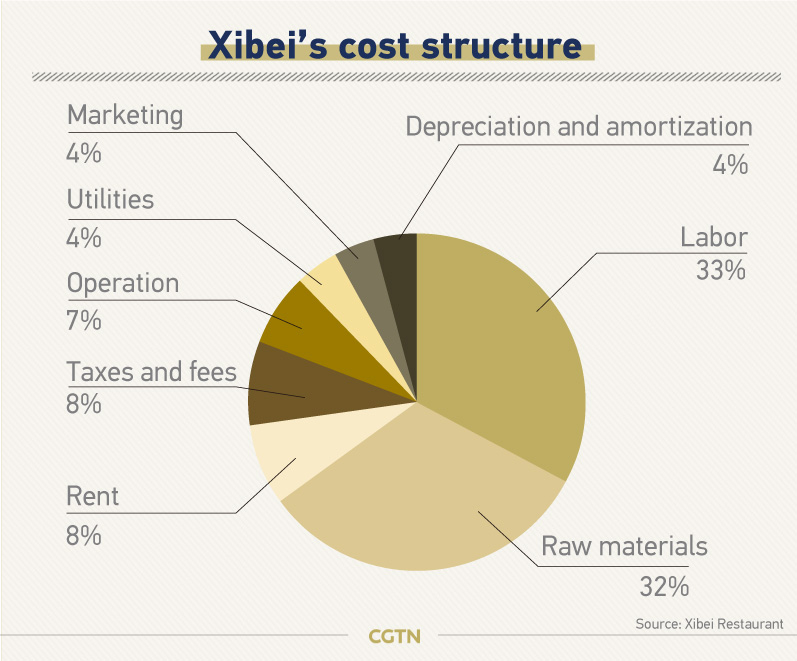 The company noted that it was easier to get by when a similar epidemic, severe acute respiratory syndrome (SARS), broke out in the spring of 2003 and killed hundreds of people.

The statement added that its employees all came back to work after the epidemic broke out that year. But now as the business gets bigger, the cost has increased as well.

Only about 2,500 of Xibei's employees are on duty in recent days. Many of them have not returned from their hometowns because of the virus outbreak, while others have chosen to stay indoors, do some exercise and learn cuisine knowledge, as their restaurants remain closed, according to Xibei.

The chain stores' pains have caught great public attention, but for some mama and papa eateries, it could be life or death if the situation lasted.

"More than a third of the restaurants I walked by in the city of Sanya have posted notices about putting their businesses on sale or for rent," Sun Wei, a man who owns his own Cantonese food restaurant in Beijing, told CGTN about his findings in the tourist resort city Sanya in southern China's Hainan Province.

The eateries and hotels in Sanya, which in normal years would have seen a boom of tourists during winters, this year barely had many customers, as many tourists have cancelled their travel plans.

Sun temporarily closed his Beijing restaurant on January 20 to spend his Chinese New Year holiday in Sanya. He had planned to return to Beijing on February 7 and reopen his restaurant the day after. But he received phone calls from local authorities in Beijing who advised him to wait before further notice. Later on, he was told restaurants can reopen if they obtain sanitation and anti-virus qualification certificates from local authorities.

However, many restaurant owners like him have been reluctant to restart business. In the Guanzhuang Village area in eastern Beijing where his restaurant is located, only about 40 out of 270 plus restaurants are now operating, said Sun. And most of them are only doing take-out business for now, he said. 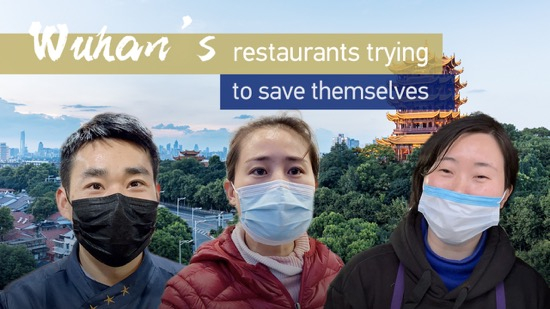 At the epicenter of the coronavirus outbreak in Wuhan, the situation is even worse.

"We saw a tremendous drop (in customers) on January 20," Liu Guoliang, chairman of Wuhan Catering Association, told CGTN in a telephonic interview, indicating the date was exactly when China's leading medical scientist Zhong Nanshan confirmed that the virus could spread form human to human.

"After that, we barely see any customers coming in to dine."

Liu said small- and medium-size restaurants were struggling the most as the rent alone was a huge burden to shoulder.

"If the situation remains like this, then it will be tough for us to keep going," staff member of a medium-sized restaurant in Wuhan told CGTN Digital.

Is delivery a way out?

Liu Zixi, a dumpling shop owner in Wuhan, said the shop only does delivery now as the customers are only allowed to make orders from outside or online now. But the delivery business is not that easy.

"We don't get too many daily deals, not as many as before (the virus outbreak)," she said.

Even year before the outbreak, food delivery in the city had not so popular, especially among city folks.

According to Liu Guoliang, only 20 percent of the restaurants have offered online delivery services because the e-commerce platform charges them a substantial amount of money for every order.

"We are trying to negotiate with some major online delivery platforms for reducing the fees," said Liu, "so that more small- and medium-sized restaurants can offer online delivery services." 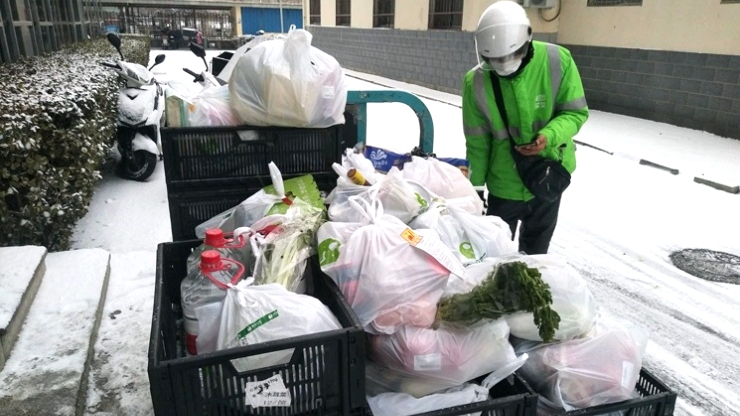 A Meituan deliveryman works on a day of heavy snow. /CGTN Photo

A Meituan deliveryman works on a day of heavy snow. /CGTN Photo

How to save themselves?

No matter how big or small, all restaurants are trying to get through this "cool down."

However, what really gave Xibei time to "catch its breath" is the Beijing Local Financial Supervision and Administration, which supported the restaurant chain after media reported its woes.

With the administration's endorsement, Xibei received a total of 120 million yuan in financial support offered by the Shanghai Pudong Development Bank's Beijing branch.

Meanwhile, many Chinese provinces and municipalities have rolled out supportive measures, such as tax and rent deductions, delaying loan payments, cutting interest rates and waiving overdue interest to help businesses tide over the ongoing epidemic.

Xibei said it is also a relief for them that Beijing has postponed the social security payment of 10 industries, including the catering sector, to the end of July.

Furthermore, the Ministry of Industry and Information Technology unveiled a string of 20 measures to support small- and medium-sized enterprises, including financial support, which is a good news for a lot of such enterprises in the catering sector.

"It doesn't make a lot of sense to discuss the coronavirus impact on GDP. I don't really care about those numbers," Xu Xiaonian, professor of economics and finance at China Europe International Business School told the media earlier. "What I really care is whether many SMEs can get through this."

More restaurants are on the lookout to see how long the epidemic will last.