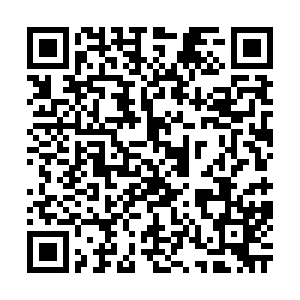 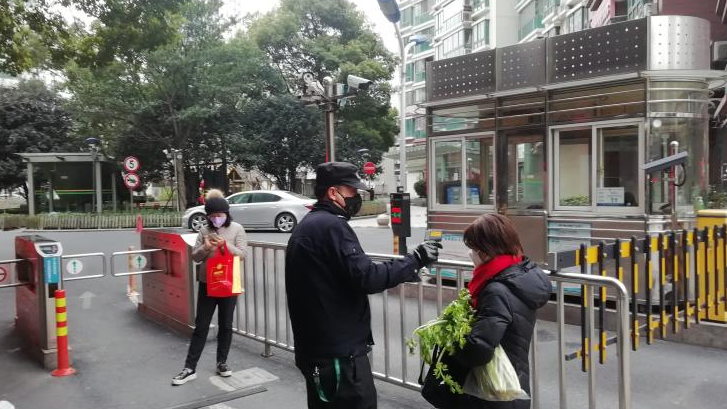 On February 11, long-time Shanghai resident John Darwin Van Fleet, who was in China during the 2002 –2003 SARS epidemic, wrote this letter to his family in Los Angeles, his second to them in two weeks, updating them about the coronavirus epidemic in Shanghai and around the country. (See the first letter here.).

Van Fleet is director of Corporate Globalization at the Antai College of Economics and Management, Shanghai Jiao Tong University.

Dear family – it's now two weeks since my last letter, and quite a lot has happened since then! Shanghai began to return to work yesterday, at least officially, a week later than the originally scheduled end of the Chinese New Year holiday. I see more traffic and trade then several days ago – the local shop selling baozi – stuffed buns – once again boasts a queue as they almost always do, but they join virtually every other reopened retailer in having signs declaring that they've sanitized the premises and/or require patrons to wear masks. 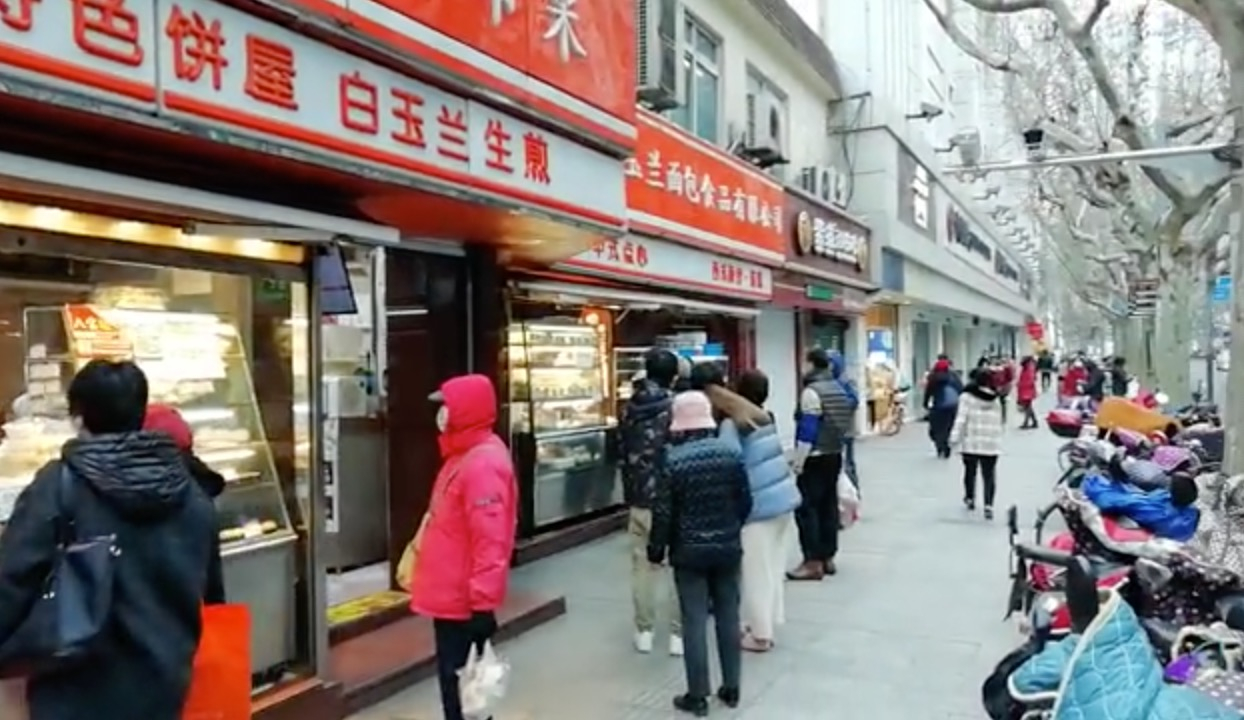 But "normal" will return slowly – one local media reported street traffic yesterday of about 20 percent of that of a usual workday. I mentioned work-from-home arrangements last time as likely – myriad companies are now asking their employees not to return to workplaces just yet.

Some companies, such as manufacturers, must have people on site – work at home is not an option. So they innovate. Foxconn, the world's largest electronics manufacturer and the maker of virtually all iPhones on the planet, employ something like a million people in China, and they suddenly need masks for all of them, at a time when all the 34 provinces and regions of China, and locales all over the world, are screaming for masks. So Foxconn have converted one of their production lines to making their own masks! Tons of enterprises, from small to huge, are trying to capture some of the enormous increase in demand for masks and similar medical disposables. Reminds me of one of my favorite Chinese words, 危机, weiji – crisis. The first character means danger, the second means opportunity. 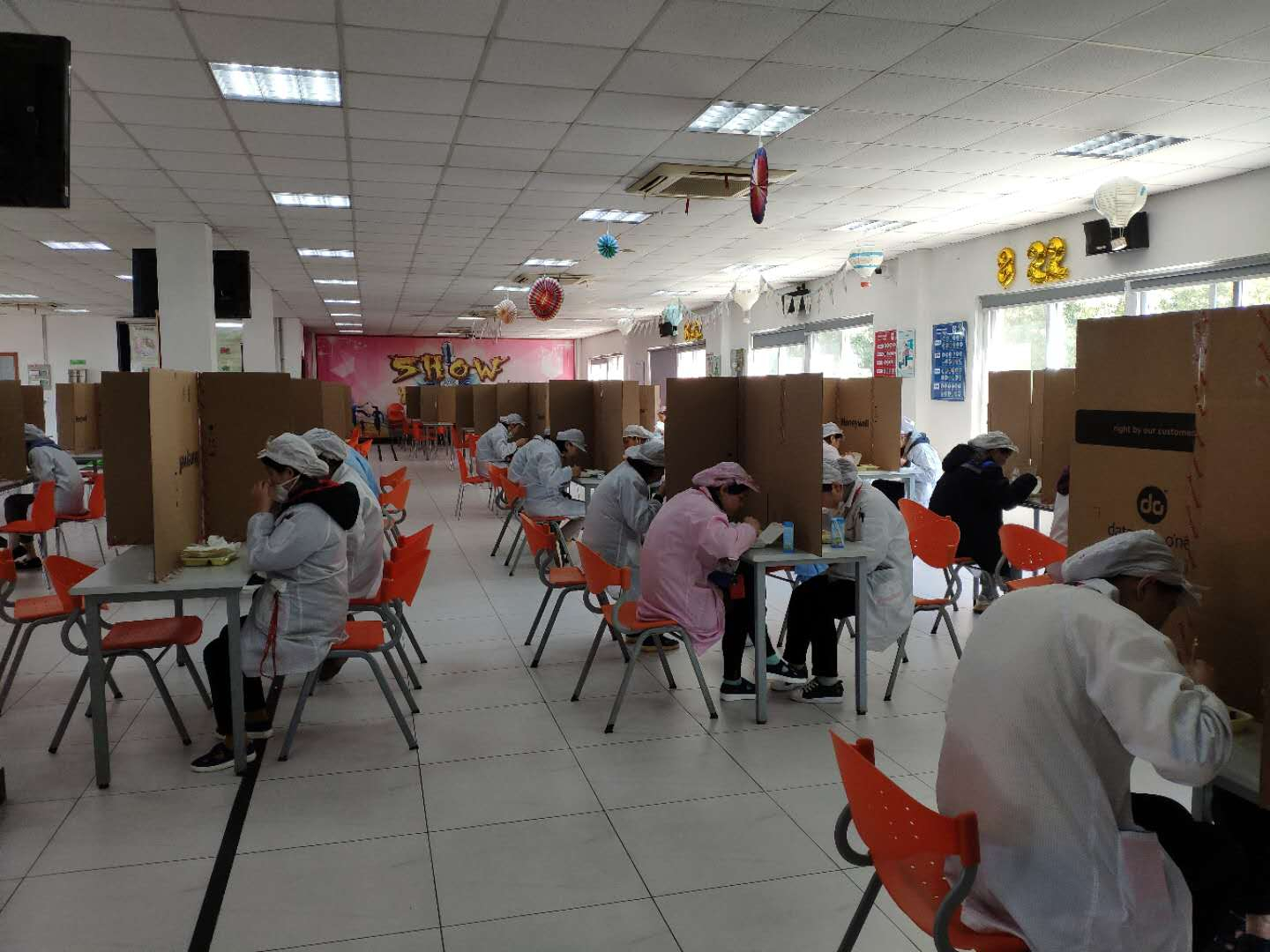 More innovation – this Honeywell factory in nearby Suzhou is using its own product packing boxes for makeshift barriers between diners in the canteen. /Photo credit: Eureka

More innovation – this Honeywell factory in nearby Suzhou is using its own product packing boxes for makeshift barriers between diners in the canteen. /Photo credit: Eureka

Innovation can't overcome everything – I see a lot of service sector businesses still shuttered – restaurants and bars, language training centers, gyms, dry cleaners and such. Product retailers – clothing/shoes, toys and such – are regaining customers, but as slowly as the reduced street traffic suggests. And that points up a macro problem – back in 2003, manufacturing for export was a much larger component of China's GDP than it is today.

Consumption is a much larger component of the economy now, and because frightened people stay at home and defer consumption, macroeconomists broadly project that this COVID-19 outbreak will have a substantially larger impact on the Chinese economy than the SARS outbreak did in 2003. 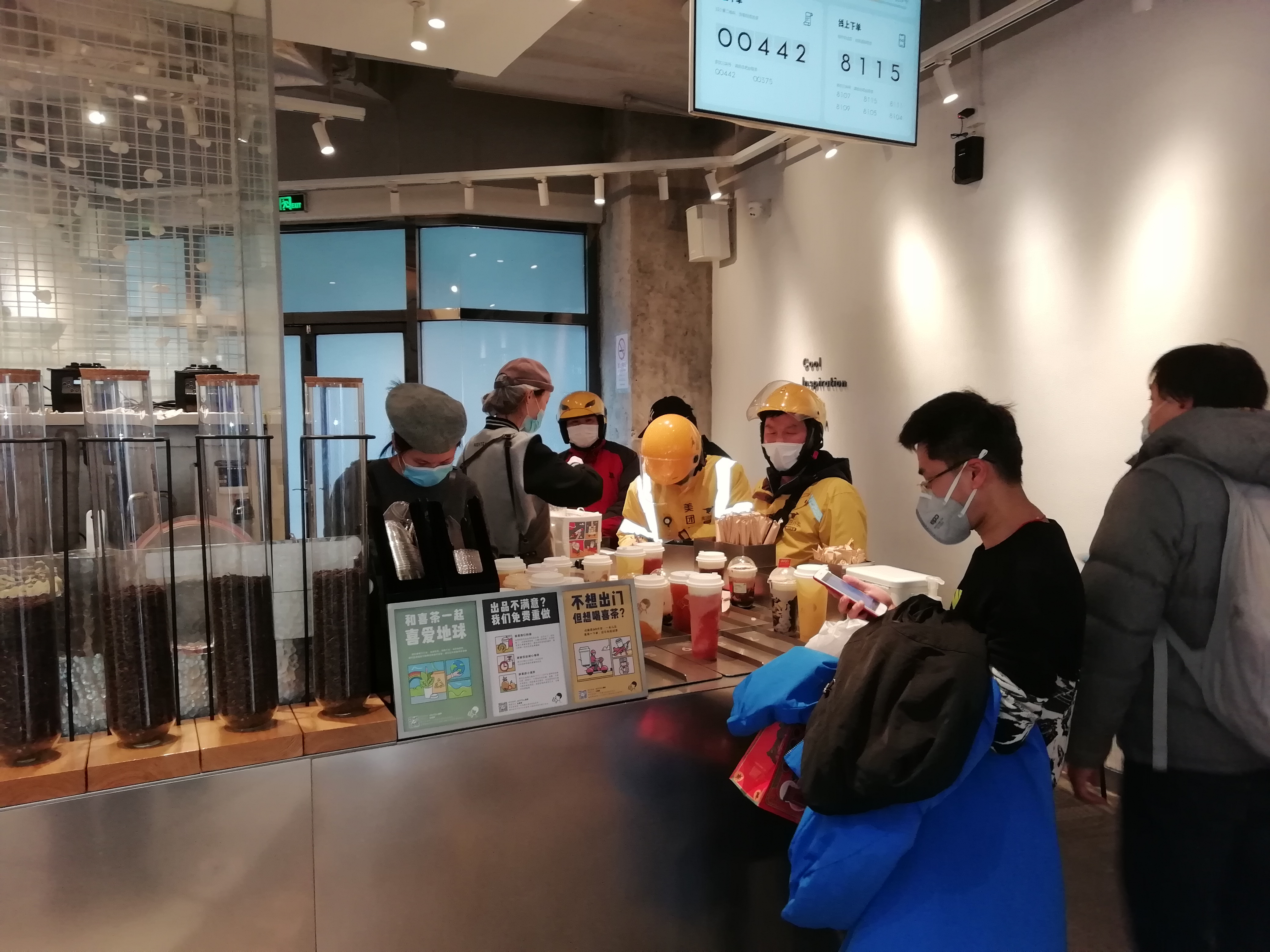 A good number of customers are here – but they're almost all delivery guys picking up for customers at home. /Photo by John D. Van Fleet.

A good number of customers are here – but they're almost all delivery guys picking up for customers at home. /Photo by John D. Van Fleet.

In the past several days, Shanghainese have been complaining online that city officials haven't been sufficiently rigorous at entry points into the city, allowing in too many returnees from the long holiday break – returnees that the locals fear may bring the virus with them. But the national government has banned local governments from imposing draconian restrictions on people's movements without approval or on companies wishing to re-open. In a press conference today, Cong Liang, secretary general of the National Development and Reform Commission (NDRC), said, "If we do not get back to work…epidemic control won't be sustainable." (translation courtesy Trivium China).

On Monday, a faculty member at the Shanghai University of Finance and Economics published an op-ed in a leading local media titled, ''Hardcore Quarantine Measures Risk Fracturing Social Cohesion." Professor Cao cites evidence that quarantines don't work so well against epidemics but do work to damage economies and societies.

It's fear that drives draconian restrictions – quarantines and the like – that's the reason why I think that FDR quote I sent you last time, "nothing to fear but fear itself," is so spot-on, here and now. The actual risk of death from the virus is minuscule compared to that from ordinary flu or traffic incidents. As of today there are about 42,000 cases and 1,000 deaths total, but if you take out Hubei Province, where Wuhan, the epicenter of the outbreak, is, you're left with about 10,000 cases and only 40 deaths, a mortality rate of well under 1 percent. In Shanghai we have about 350 cases, but only one death, more than two weeks ago – an 88-year-old man who had fled Wuhan – in a metropolis of about 30 million people. And the American Chamber of Commerce in Shanghai, now issuing a daily COVID-19 epidemic update, reports that the number of daily new confirmed cases, excluding Hubei, has been dropping dramatically for a week.

Even Hubei is seeing a daily decline – the tragedy there is that many people have died not because the disease itself has a high mortality rate, but because so many cases in a concentrated area have overwhelmed the healthcare system. People are dying of pneumonia that would ordinarily never be fatal.

But Roosevelt's fear rages on, and will probably kill, directly or indirectly, many more people than the virus ever will. Reminds me of 9/11 – the restrictions on air travel, and people's fear of it, after the terrorist attack led to a major increase of road vs. air travel. Since road travel is statistically far more dangerous than air travel, the fear the terrorists caused killed more people than died on the day.

Now we're seeing images of crews in hazmat gear fumigating deserted streets or, worse, tanker trucks in foreboding formation spraying broad boulevards. Epidemiologists agree that these are valueless exercises in virus suppression (though they do let beleaguered local government officials say they're 'doing something'), but those scary images are tremendous at stoking more fear. Behavioral economist Daniel Kahneman won a Nobel prize in part for proving (again) that humans are notoriously poor at rationally assessing probability in such events. The panic virus will, unfortunately, likely remain virulent for a few more weeks. 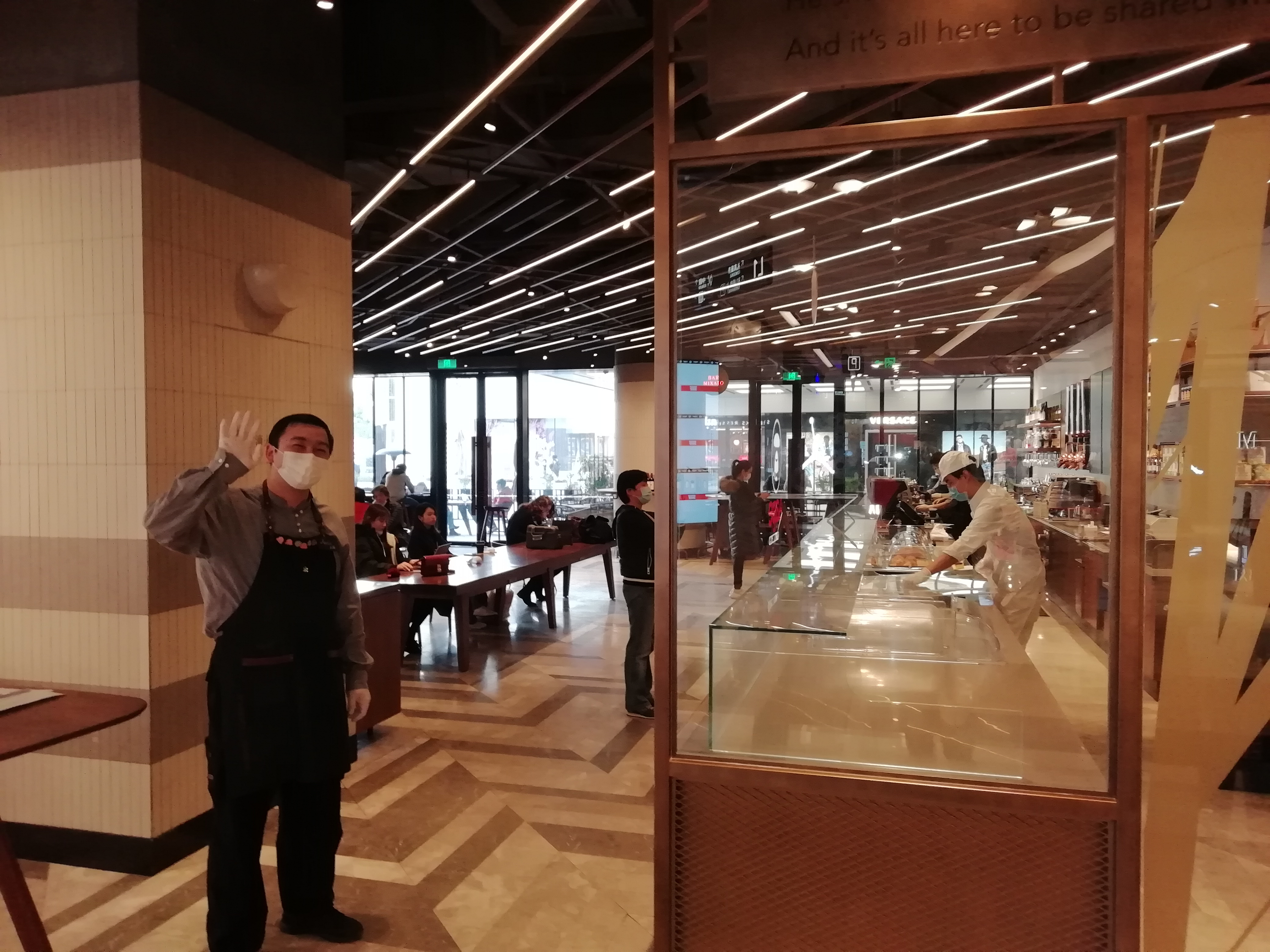 In such an environment, it's no surprise that we've heard a Chicken Little chorus of voices, especially among expats, crying, "GET OUT WHILE YOU CAN!!!"

A few days ago, I asked an acquaintance of mine, a trained epidemiologist, resident in China for many years and the leader of a major healthcare practice here, "Any thought of leaving?" I gained a rather definitive response: "I have no intention to leave because of this virus." This conclusion aligns with that of cool-headed healthcare authorities worldwide, but we're not hearing nearly enough, at least not heeding nearly enough, of those rational voices yet.

-In an ordinary year, the flu sickens tens of millions of people here and kills more than 100,000. This year those figures will plummet because of the massive increase in hand washing and other hygiene, and China will gain a much needed productivity bump as a result.

-Our university is only one of thousands of institutions across the country that are now looking more than ever before to develop stronger online options. Alibaba's Dingtalk online learning app has tens of millions of users in the past week or so, as the bricks and mortar schools remain shuttered. (No surprise: Children who now have to attend sessions online are rating the app "one" on a 1 to 5 scale, because they'd rather that school closures let them continue their holidays!) A more robust online education environment will make it easier for more people to develop themselves in our fast evolving 21st-century economy.

-The other unintended consequence comes with an investment tip. Consider buying shares in companies that serve the Chinese maternity market. You're likely to see a substantial spike in births later in the fourth quarter 2020, in part because local government themselves are encouraging couples to engage in, um, procreative behavior. 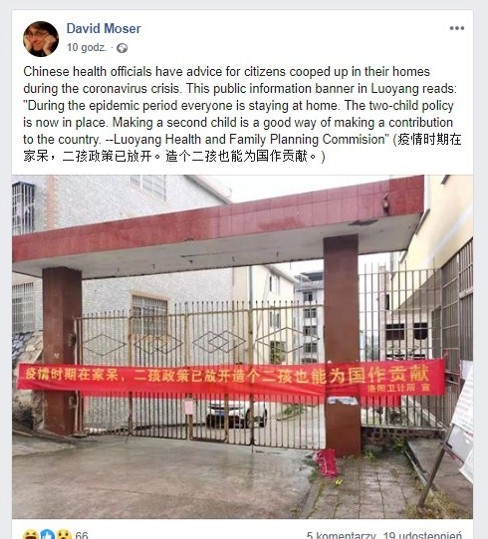 A deplorable but not particularly surprising side effect of the panic is the explosion of prejudice and xenophobic stupidity (yes, a redundancy) expressing itself in media, social and otherwise, around the world.

Three boys I know, Miguel, Alejandro and Carlos, Spanish citizens but all born here, have just responded with a video which, I think, speaks for itself, and rather touchingly at that. The final unintended consequence I offer you is that this epidemic, largely of fear, may actually wind up bringing people together in the effort to overcome the consequences. 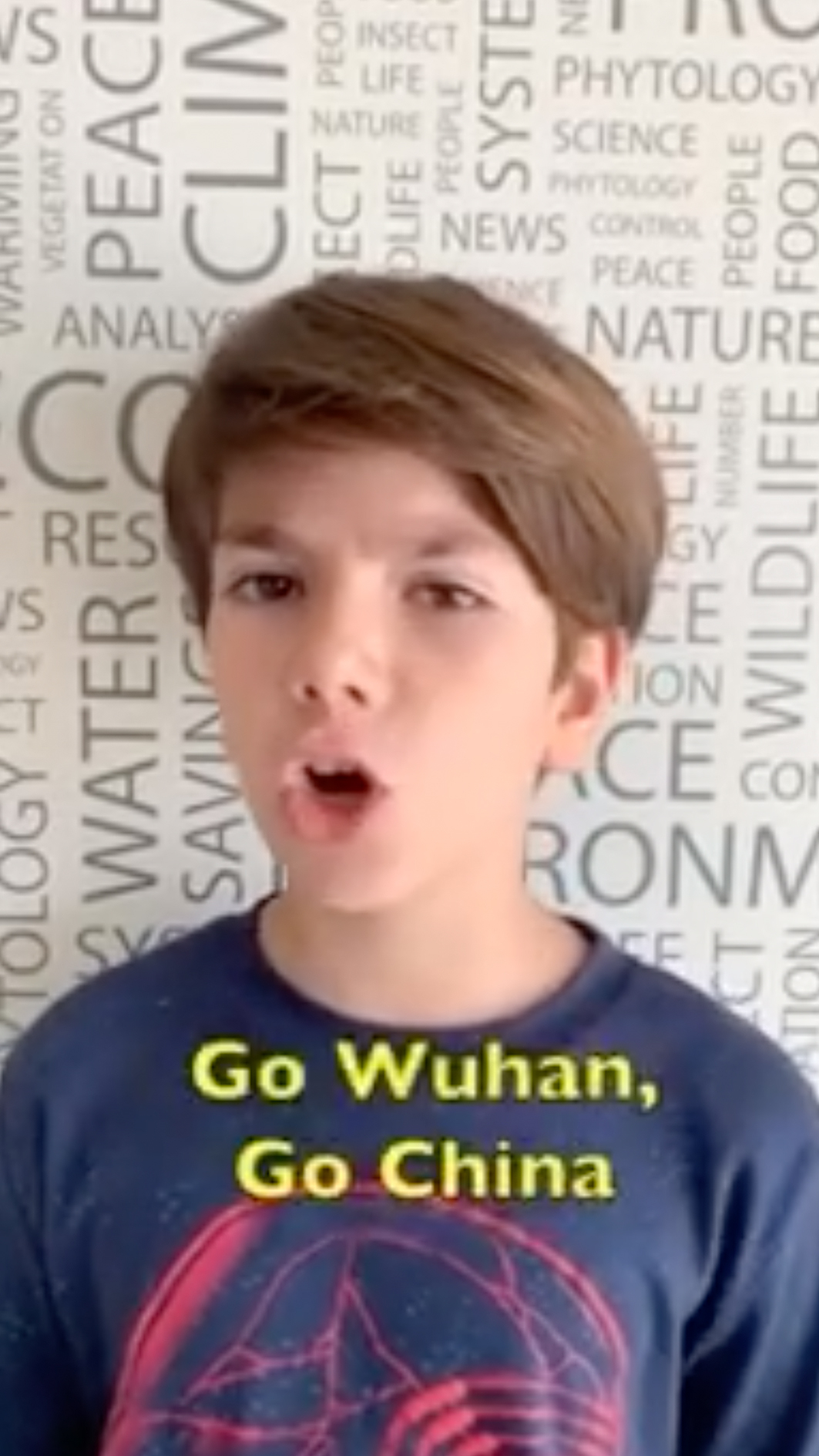 SARS took a fair while to overcome, and this one will too. But I still feel unusually fortunate to be here, even during these peculiar weeks. Over the weekend, I created a new motto for myself, which I hope others will adopt: "Wash your hands, get back to work, have some fun."

Love to all of you – now please excuse me, because the sink is calling!