An unusual Valentine's Day: Love in the time of coronavirus
Zhang Guanlan 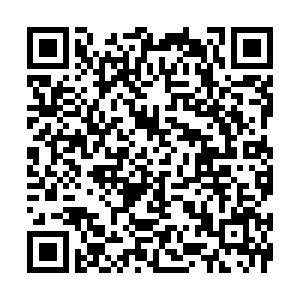 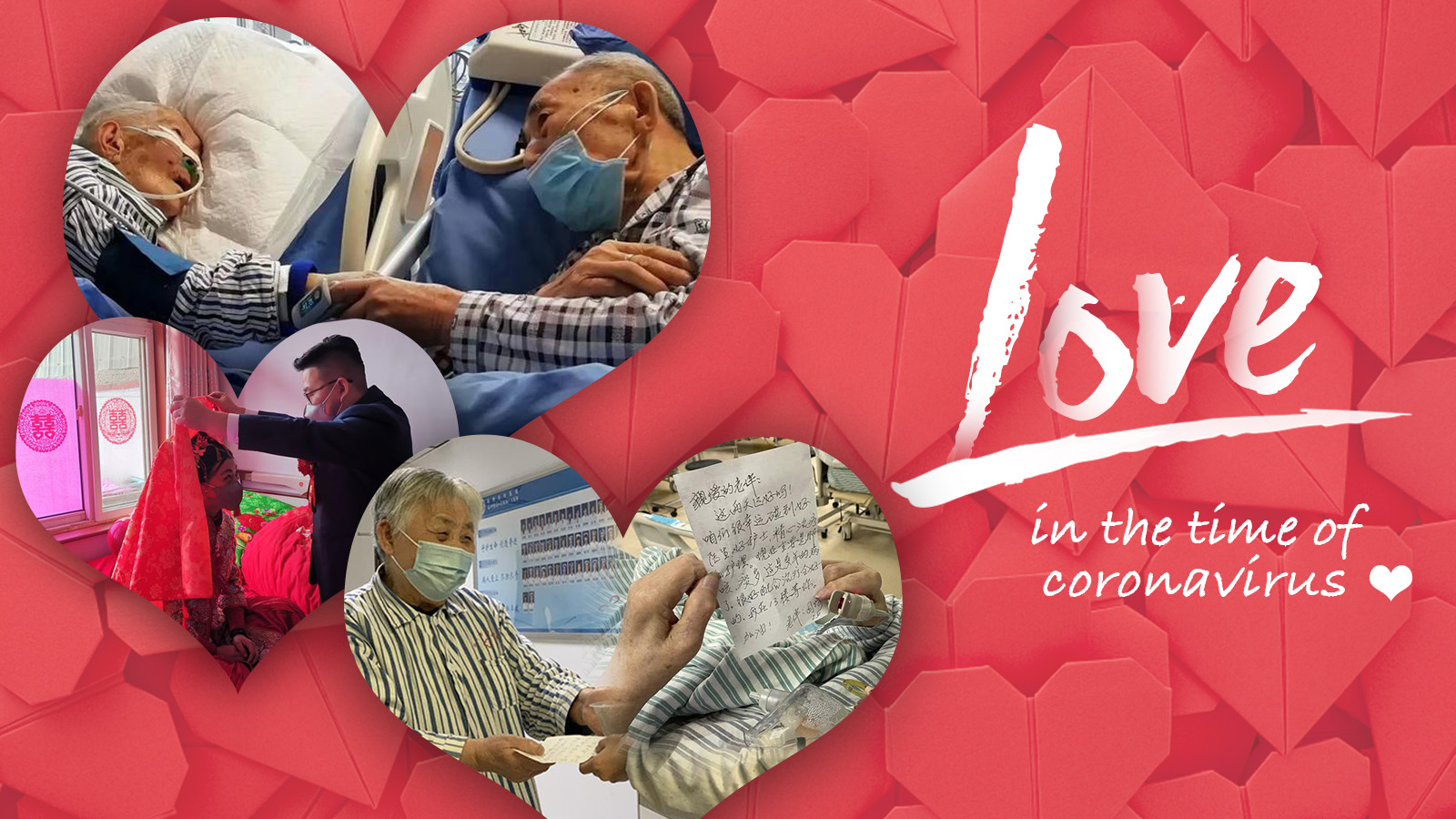 Whether you have read the novel Love in the Time of Cholera before or not, the drastic twists and turns of the relationship depicted seem unique, until now.

Weeks after the outbreak of the novel coronavirus, people have been keeping off the streets, suggesting that love might not exactly be in the air on this special day. But, love in the time of coronavirus has been evidenced every day, showing us what true love is.

A heart-breaking video of an elderly couple bidding goodbye to each other at the hospital as they allegedly suffer from the novel coronavirus is doing the rounds on the internet. The video, first seen on Douyin (China's TikTok), revealed a limited scene of the couple lying on sickbeds, locking eyes while the wife was struggling to breathe. Their tightly holding hands at the time of farewell crushed hearts. 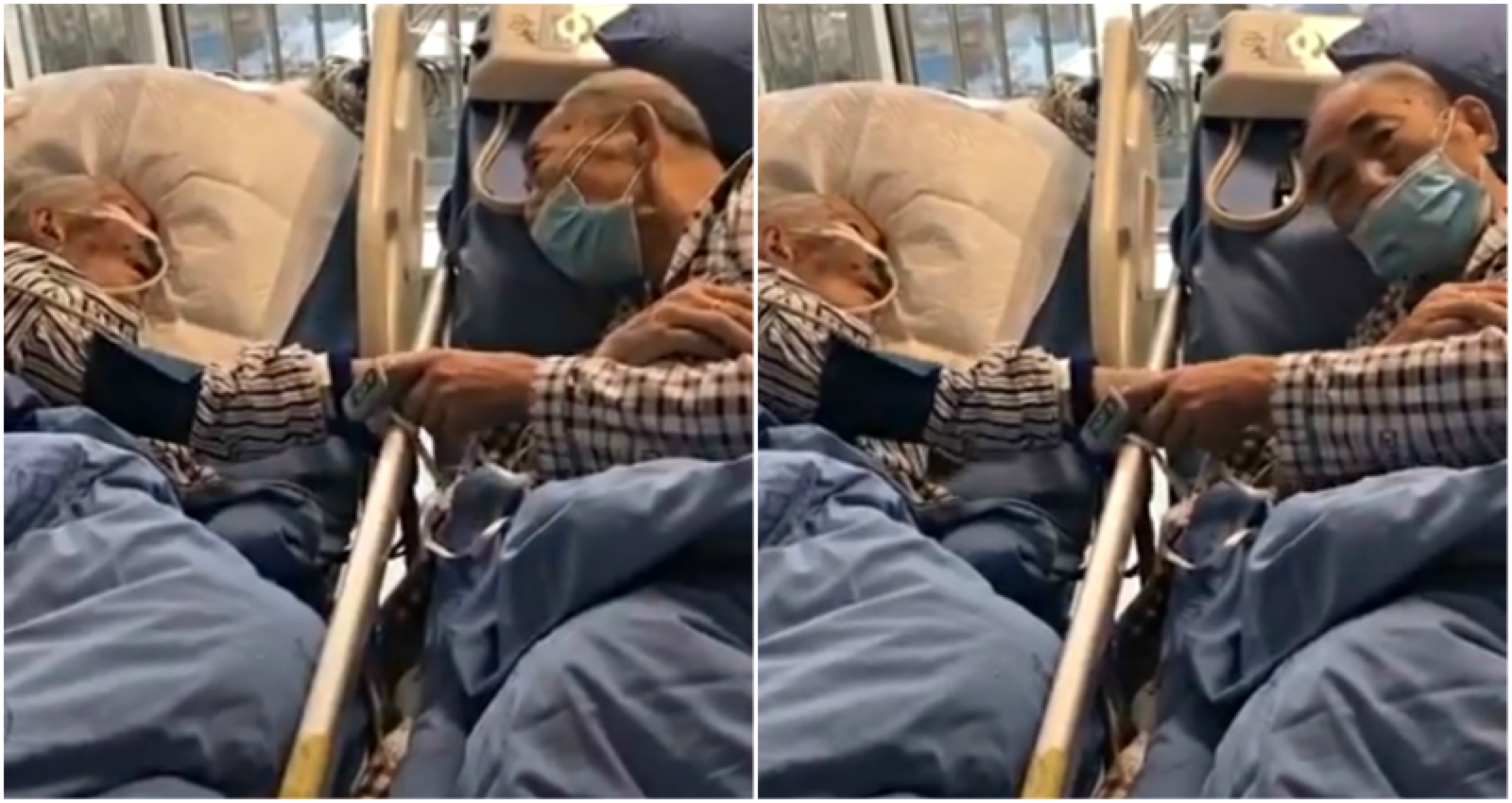 Due to chronic pulmonary obstructive disease (COPD), lung cancer with bone metastasis and coronary heart disease, Zhang, 85, was reportedly admitted to Xindu No.3 People's Hospital in Chengdu, southwestern China's Sichuan Province on January 16. The following day, his 87-year-old wife, Wen, who originally suffered from Alzheimer's Disease (AD), was admitted to the ICU at the same hospital after acute confusion and respiratory failure.

Despite days of efforts to resuscitate her, Wen has fared worse. On January 30, Zhang made the request via his children if he could see her. "In this life, maybe I will never see her again," Zhang, the husband, reportedly told his children. "I just want to see her."

With the help and safety measures provided by the hospital, the couple finally met each other, lying on their hospital beds pushed together. Zhang firstly grasped his wife's hand tightly, mumbling to her through his mask. "I am here," he said to her, faintly but reassuringly. Wen, who had been barely conscious, squeezed Zhang's hand, and later grabbed his bed pole as they were about to be separated, reported Sina News. 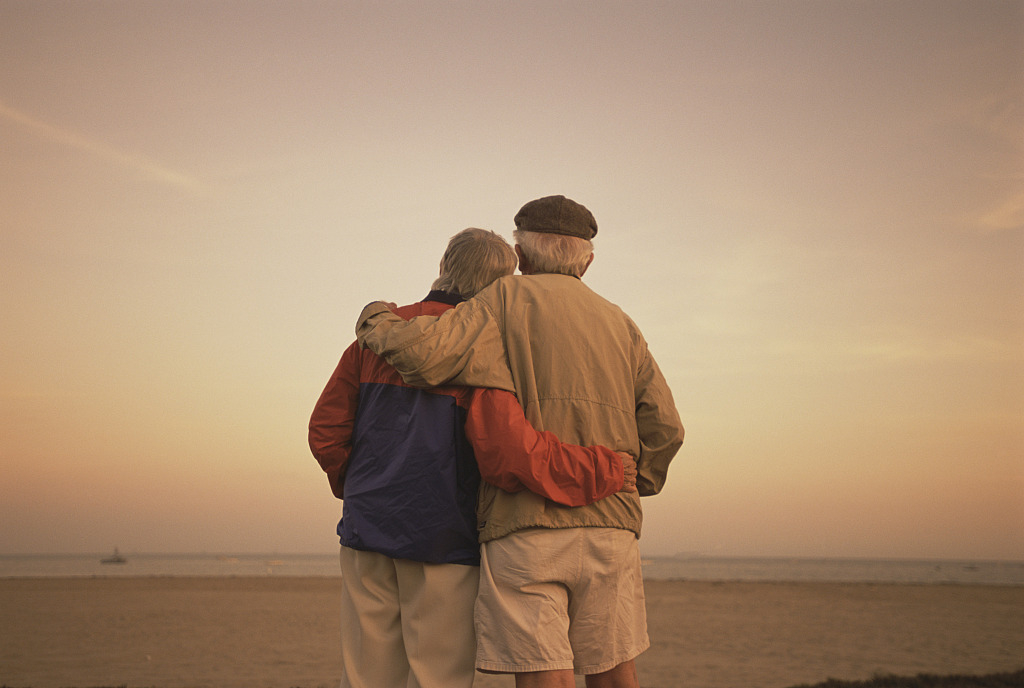 Wen passed away a day later, while Zhang reportedly still remains in the hospital for treatment.

Love letters to my ICU husband

Ever since the outbreak of the novel coronavirus, in the intensive care unit of Hangzhou Traditional Chinese Medicine Hospital in eastern China's Zhejiang Province, the medical staff have been more busy than usual. The hospital lockdown during this special period has left visitors, including patients' family members, with no access to the ward. At this local hospital, however, a daily love letter and a bowl of kiwis have become a way for two elderly to convey their love. 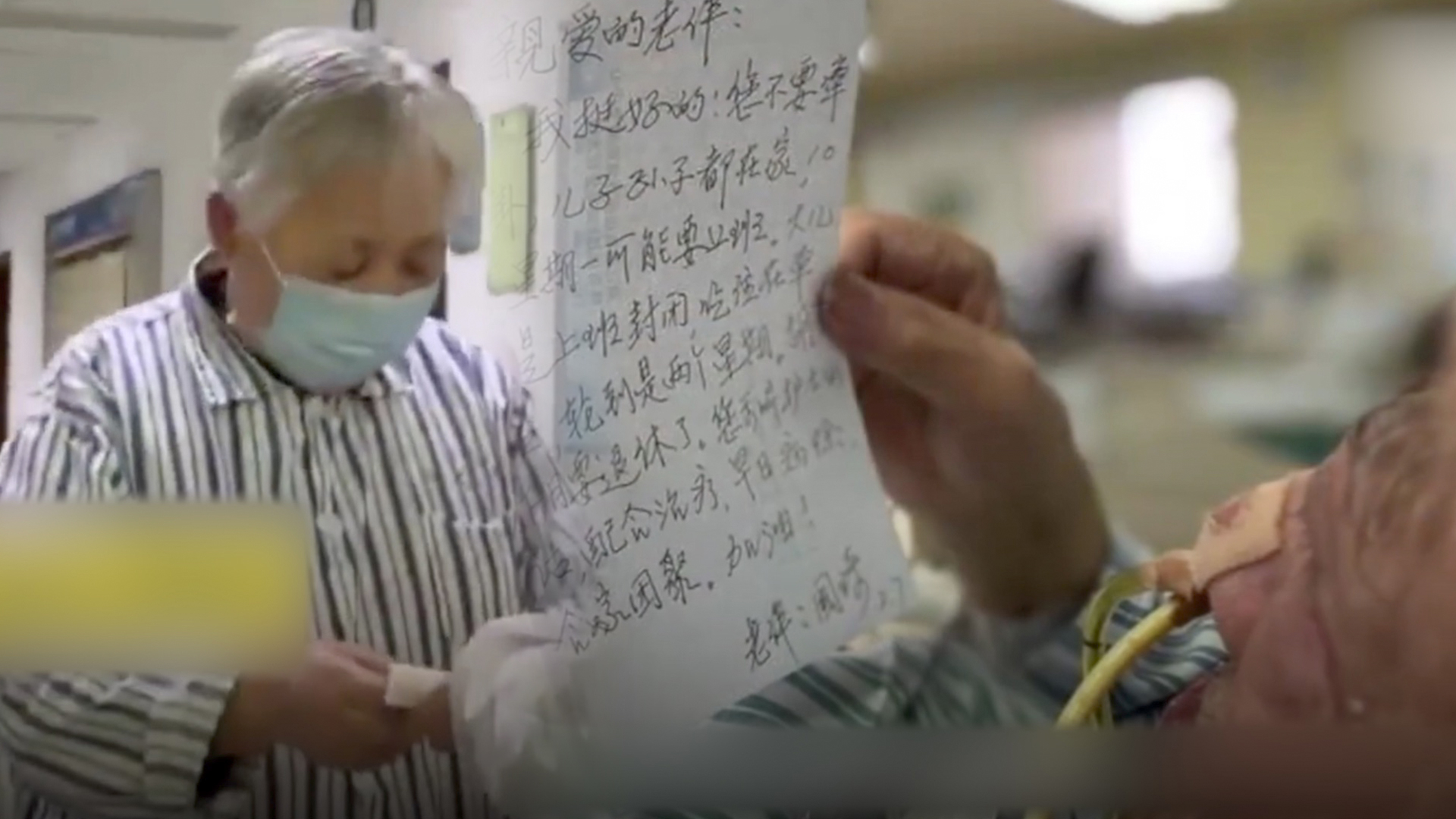 Huang, 84, was hospitalized in the geriatrics department on the 13th floor due to respiratory diseases. Her 90-year-old husband, Sun, is an alleged coronavirus patient treated in the ICU on the third floor of the same building.

Huang usually visited her husband every day, bringing Sun's favorite – kiwi fruit – to the ICU, and touching his forehead before leaving. However, as the coronavirus outbreak forced the hospital into a lockdown, the elderly lady now gives kiwi fruit to her beloved via nurses every day, and exchanges love letters with her husband.

Each love letter starts with "my dear husband/wife," is loaded with love, encouragement and missing of each other. Without any violent demonstrations, true love is presented in each stroke of the character of their handwriting.

The recent novel coronavirus outbreak may have hindered a lot of plans. However, it doesn't seem to have overwhelmed young Chinese couples' determination to be married. One couple in the city of Jiaozhou, eastern China's Shandong Province, held a no-guest wedding with a two-minute service witnessed by only four people all wearing masks. 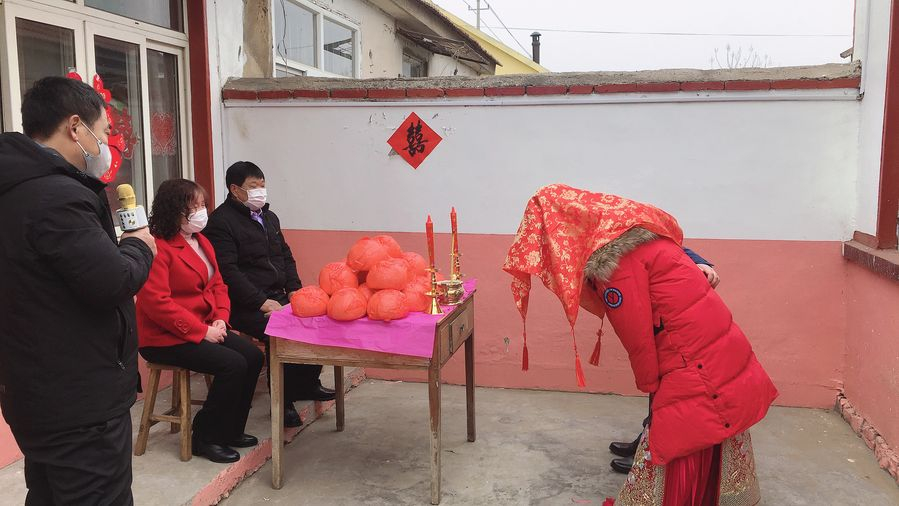 The couple made a bow to their parents during a concise ceremony held in a courtyard on the day of wedding. /Xinhua Photo

The couple made a bow to their parents during a concise ceremony held in a courtyard on the day of wedding. /Xinhua Photo

With the bride's father serving as the MC and her mother as the photographer, Zhang Long and Chen Xiao, the bridegroom and bride, pressed on with their schedule but turned the banquet into a concise yet mask-wearing ceremony attended only by parents of the two.

At about 10 a.m. on the day of the wedding, the bridegroom drove out to pick up the bride. After only a five or six-minute-drive, he arrived at the bride's house next door. At the moment when Zhang lifted the red bridal veil, they both laughed. "I couldn't even see what lipstick color she put on since she was wearing a mask," said the bridegroom Zhang Long, according to Xinhua. 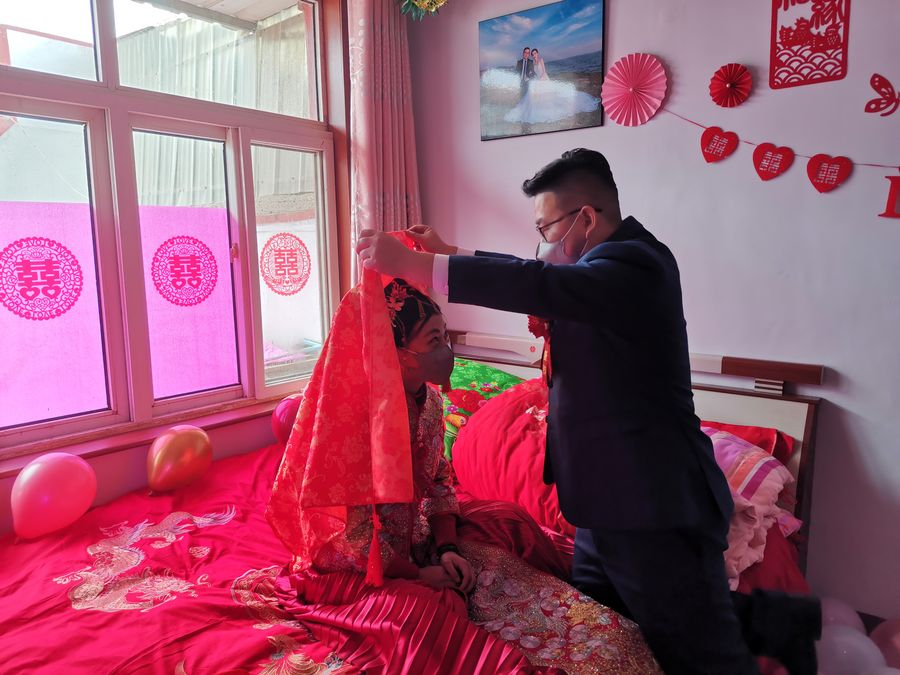 The moment when the groom lifted the red bridal veil. /Xinhua Photo

The moment when the groom lifted the red bridal veil. /Xinhua Photo

After the extraordinarily short ceremony, the groom followed the local custom of eating pork fried by his mother-in-law before taking the bride home.

After all, the wedding is just a ceremony in the couple's eyes. "It was unexpected that the situation turned critical. It cost him only several hundred yuan to marry me," said Chen Xiao, the bride, to Xinhua, "But it doesn't matter, as long as he is the right man for me."

Today, February 14, is destined to be different. The novel coronavirus has been casting a shadow for weeks, but true love has remained.