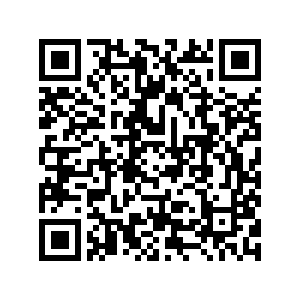 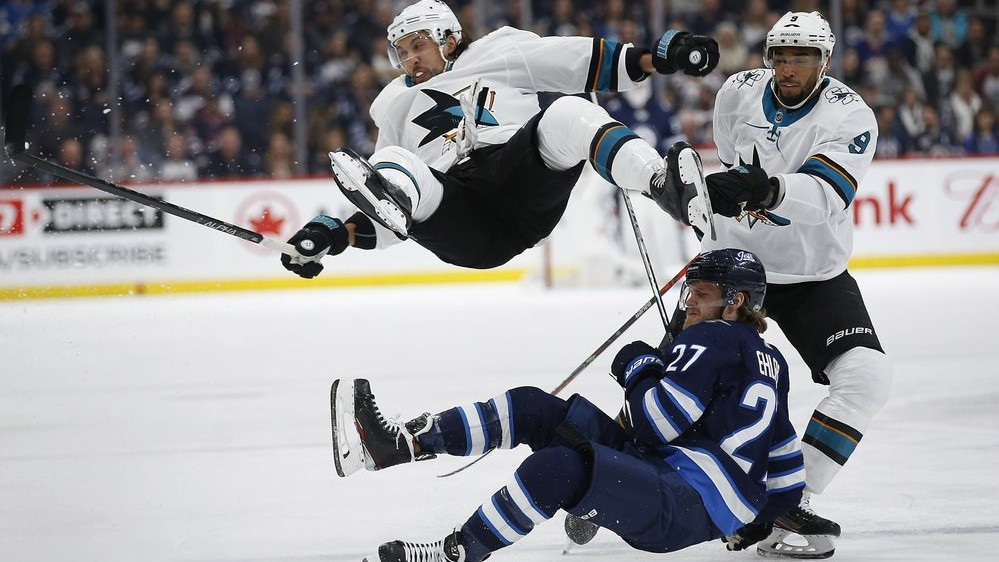 Nikolaj Ehlers #27 of the Winnipeg Jets collides with Brenden Dillon of the San Jose Sharks in the game at the Bell MTS Palace in Winnipeg, Manitoba, February 14, 2020. /AP Photo

Nikolaj Ehlers #27 of the Winnipeg Jets collides with Brenden Dillon of the San Jose Sharks in the game at the Bell MTS Palace in Winnipeg, Manitoba, February 14, 2020. /AP Photo

Melker Karlsson and Timo Meier scored in an 89-second span in the third period to lift the San Jose Sharks to a 3-2 victory over the Winnipeg Jets on Friday night.

Marcus Sorensen also scored for the Sharks, who are 4-3-0 in their last seven games. Aaron Dell made 29 saves for San Jose and had help from the post during a late flurry of shots by the Jets.

"Yeah, that was a nice bounce," Dell said of a shot by Winnipeg leading-scorer Kyle Connor that hit the post with 20 seconds left in the third.

"It was kind of a bouncing puck," Connor said of missing the open net and hitting the post.

Connor scored his team-leading 29th goal of the season with some highlight-worthy moves on the power play, and Blake Wheeler had a goal and assist for the Jets.

Connor Hellebuyck stopped 32 shots for Winnipeg, which was playing the fourth game of a season-long six-game homestand (2-2-0). The Jets are 4-3-1 in their last eight games.

The Sharks led 1-0 after the first period and the Jets held a 2-1 lead after two.

Sorensen's sixth goal of the season at 14:51 of the first counted after a Winnipeg coach's challenge was unsuccessful. Sorensen banged in a loose puck from a crowded crease, but the Jets claimed it was goaltender interference because Hellebuyck's pad was pushed.

"I'm making that call all day long and it really doesn't matter what they say," Jets coach Paul Maurice said of the challenge. "There's no way they can tell me that's not goalie interference.

"It's two sticks into his pad that pushes him behind the line. I understand the puck goes five-hole on him, but that's the reason why. He's spread open on the two sticks that push him behind the goal line. It's not incidental contact.”

"If they didn't push my pad off, I would have just covered it," he said. "It would have been a simple play. But they threw me completely off and one guy, there was two sticks, one guy pushed me off the post, which was my anchor, and the other guy pushes my pad straight in. I'm trying to hold my balance and fight it but there's really no play for me to make."

The Sharks outshot the Jets 13-3 in the first period.

Connor and Wheeler gave Winnipeg a 2-1 lead with goals 86 seconds apart in the second.

With former Jets forward Evander Kane in the penalty box for interference, Connor got a pass from Wheeler near the edge of the crease. He moved the puck between his own legs with a backhand, then changed to the forehand and shot the puck past Dell at 8:21.

"Honestly it was just kind of instincts," Connor said of his moves. "I just got the puck and I knew (Dell) dropped down there, just have to get to the other side, right? Just instincts I guess."

Wheeler scored at 9:47 with a high one-timer through traffic.

The Sharks held a 24-14 advantage in shots on goal after the second period.

Meier, who scored the winner off a rebound, has six points (three goals, three assists) in a four-game point streak.

"Yeah, it got a little tight," Meier said of his goal. "I was a little worried that (Hellebuyck is) going to get his stick on it, but luckily it went in and I'll take those any day."

Veteran San Jose defenceman Brent Burns picked up an assist on Meier's goal in his 1,100th NHL game. It was also the 34-year-old's 528th consecutive game, the second-longest active streak among defensemen behind Florida's Keith Yandle (854).

Winnipeg went on the power play with 6:43 remaining in the third after Kane crushed Jets defenseman Neal Pionk from behind into the boards.

The Jets put six shots on Dell with the man advantage, but his glove knocked away a shot by Wheeler and a blast by Patrik Laine was blocked.

Winnipeg sent a flurry of shots at Dell in the final minute, with one hitting the post and Dell smothering another.