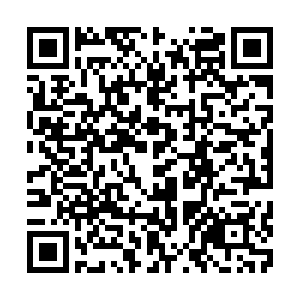 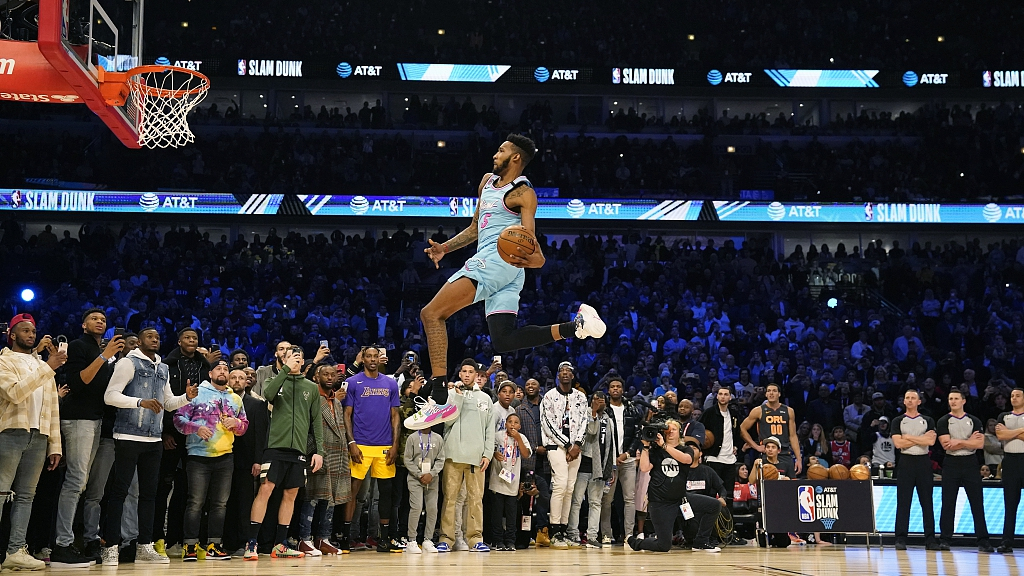 Derrick Jones Jr. of the Miami Heat in air to make his last dunk during the Slam Dunk as part of 2020 NBA All-Star Weekend at United Center in Chicago, Illinois, U.S., February 15, 2020. /VCG Photo

Derrick Jones Jr. of the Miami Heat in air to make his last dunk during the Slam Dunk as part of 2020 NBA All-Star Weekend at United Center in Chicago, Illinois, U.S., February 15, 2020. /VCG Photo

Aaron Gordon lost another epic dunk contest. And it was by a couple of inches – namely, the top of Tacko Fall's head.

Derrick Jones Jr. finally got his long-awaited dunk contest title as an exclamation point to an scintillating All-Star Saturday Night, both for him and the Miami Heat. Jones and Gordon needed a dunk-off to decide a winner, Jones prevailing 48-47 in the one that determined who left with the trophy.

Miami's Bam Adebayo won the skills title as well, and Sacramento's Buddy Hield took the 3-point crown. Their wins were absolute, without ambiguity: the ball going in told the tale. But the dunk contest came down to the judges' call.

Gordon brushed against the back of Fall's head, and that was enough to sway three of the judges – they gave 9s, and that combined with two 10s added to the final 47. Jones said he would have settled for another dunk-off round.

"He clipped Tacko's head when he did that dunk, so I knew they couldn't have gave him a 50 for that one," said Jones, who was in the dunk contest in 2017 as well. "I would have respected it if they gave him another 48, so we can go again." 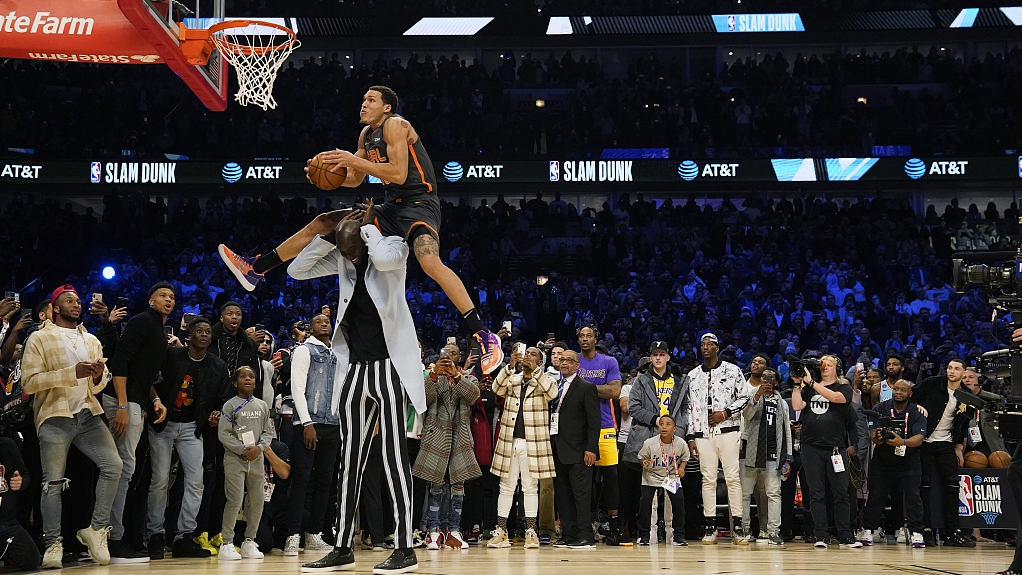 Aaron Gordon of the Orlando Magic dunks the ball over Tacko Fall of the Boston Celtics during the 2020 NBA All-Star Weekend in Chicago, U.S., February 15, 2020. /VCG Photo

Aaron Gordon of the Orlando Magic dunks the ball over Tacko Fall of the Boston Celtics during the 2020 NBA All-Star Weekend in Chicago, U.S., February 15, 2020. /VCG Photo

Thing is, it wasn't clear if they would have dunked again had it still been tied after Gordon's final attempt. The NBA was not going to permit co-champions, and there would have been a point – which they were possibly at – when judges would have had to vote and decide a winner.

Controversy reigned regardless. And much like 2016, when Gordon lost to Zach LaVine in one of the best dunk contests ever, the Magic forward – who set a dunk contest record with five perfect scores – left frustrated.

"I feel like I should have two trophies," Gordon said.

When Gordon the 7-foot-5 Fall to come out for his last dunk – Fall played college basketball in Orlando at UCF – it was the ultimate risk-reward moment.

Gordon, who wanted to jump over the slightly shorter-than-Fall Shaquille O'Neal but got that invitation declined, needed a 49 to win. But he didn't totally clear his very tall prop, and just like that Jones was the champion.

Jones lauded Gordon for trying a dunk over Fall.

"If I would have thought of it earlier, I'd have did it," Jones said. 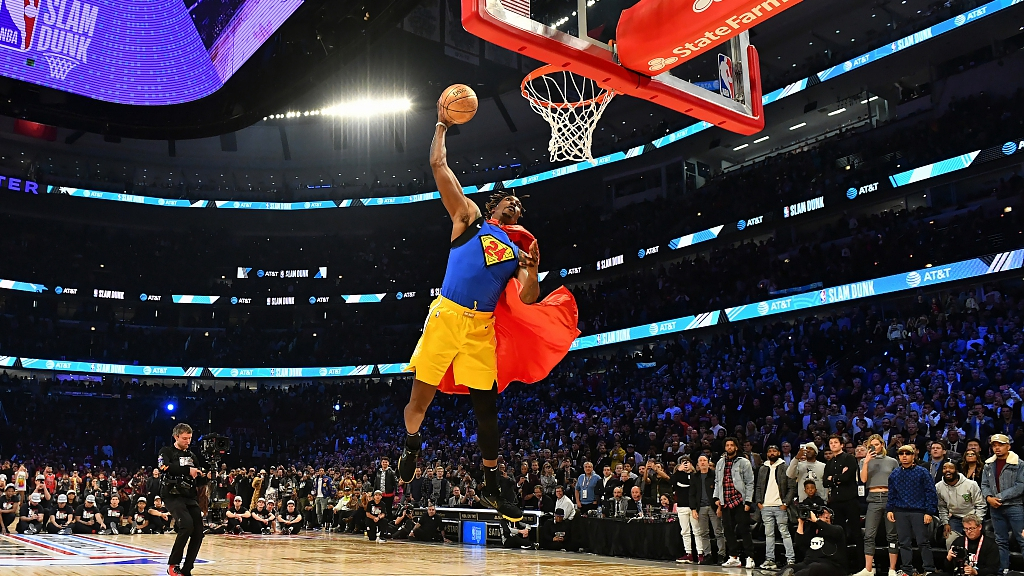 Dwight Howard of the Los Angeles Lakers participates in the 2020 NBA All-Star at the United Center in Chicago, U.S., February 15, 2020. /VCG Photo

Dwight Howard of the Los Angeles Lakers participates in the 2020 NBA All-Star at the United Center in Chicago, U.S., February 15, 2020. /VCG Photo

The first round was full of props: Jones – celebrating his 23rd birthday – had a birthday cake and Adebayo on the court for his first dunk, Gordon went over Chicago native Chance The Rapper for a slam, Milwaukee's Pat Connaughton leaped over Bucks teammate Giannis Antetokounmpo and kissed the ball off the glass before his second dunk, and the Los Angeles Lakers' Dwight Howard brought back his Superman dunk from 11 years ago as well.

Jones Jr. and Gordon emerged as the two finalists. Gordon was perfect on every dunk until his last one. But in the end, Jones proved prophetic.

Adebayo drew 2018 skills champion Spencer Dinwiddie of Brooklyn in the first round, having no problem with the accurate pass into a tight window, layup and 3-pointer that, to win, need to be made before an opponent completes the same course. Same thing in the second round, Adebayo finished off Toronto's Pascal Siakam without a miss once again to earn his spot in the final. 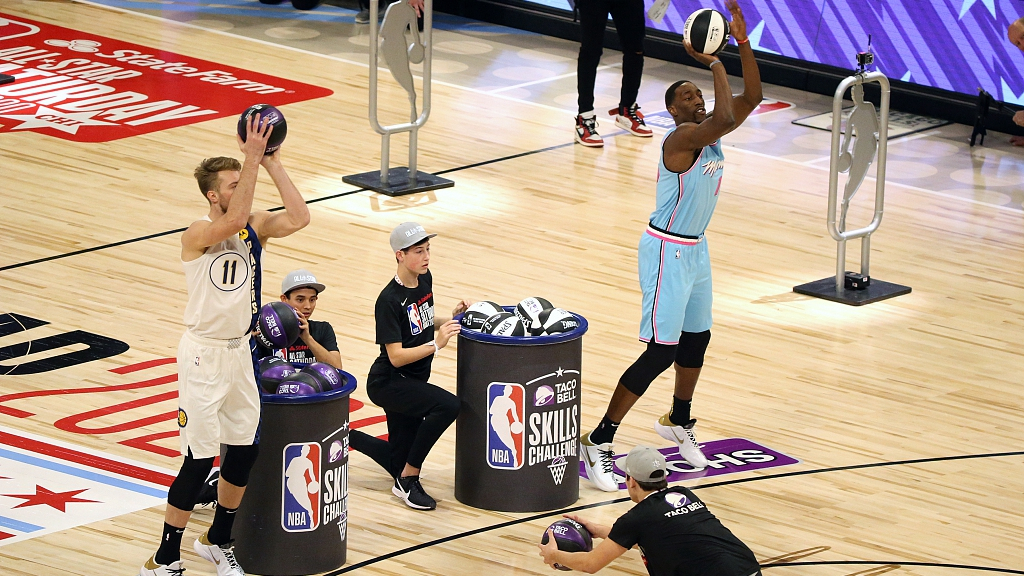 It came down to big men: Adebayo against Indiana's Domantas Sabonis. It took three tries for Adebayo to make his 3-pointer to win, and he still wound up beating Sabonis to the final make. Sabonis felt he rushed his second shot, and that gave Adebayo a leg up.

Neither Sabonis nor Adebayo was surprised that a pair of bigs wound up dueling for the skills title.

"It's just showing how the game is changing and how big men and power forwards are basically bringing up the ball, passing the ball," Sabonis said.

Adebayo dedicated the win to his mother – she'll be getting the trophy as well – and said he was particularly honored to compete with a patch on that paid tribute to Kobe Bryant, his daughter Gianna and the other seven victims of the helicopter crash that took their lives in Southern California on Jan. 26.

All competitors Saturday wore a patch with the numbers 2 and 24 — for Gianna and Kobe – surrounded by nine stars, signifying nine victims.

"When I was in high school, I said if I get to the NBA, I want to meet Kobe," Adebayo said. "I felt like this (was) my All-Star to do it. I feel like he's been more of an impact now than he was back then. Not saying that him living didn't do anything for me, but it just means more now that I know I can never meet him. I feel like he knows who I am now. So just keep trying to make him proud."

Adebayo won his trophy with a 3-pointer on the final shot, so perhaps it was fitting that Hield won his in the same manner. 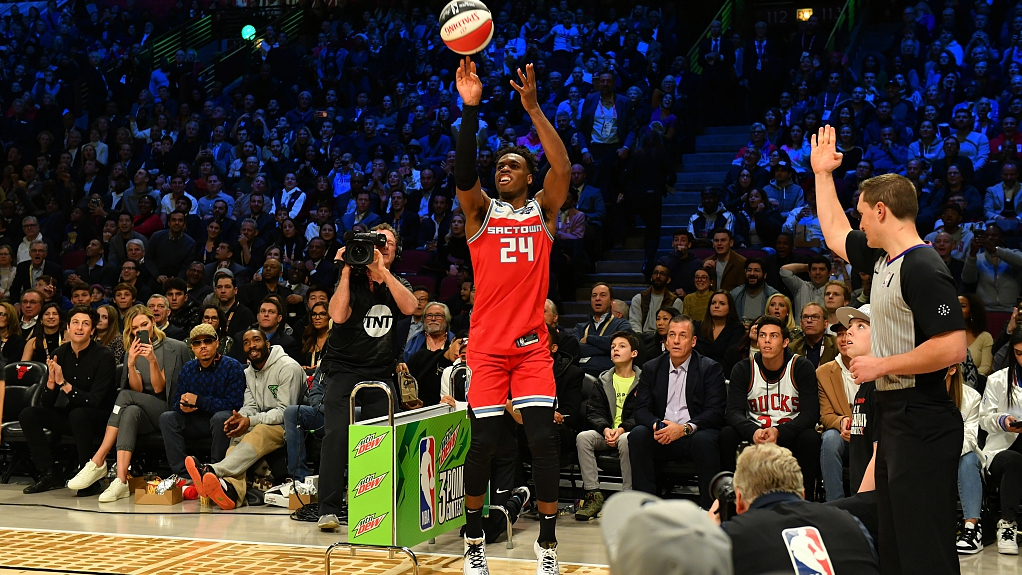 The 3-point contest came down to Hield, Booker and Washington's Davis Bertans after five others – including defending champion Joe Harris – were knocked out in the first round. Bertans went first in the final round, scoring 22. Booker went next, scoring 26.

And that left Hield, who made his last six shots of the opening round and needed to get hot again late in the final.

His "money ball" rack – the one where every shot was worth two points – was the final of his five full racks, and he got to that corner with 19 points. That meant he had to go 4 for 5 on the last rack to catch Booker.

Hield then missed the fourth shot before letting the final one fly – dancing for joy when it dropped through the net, giving him a walkoff victory.

"As a shooter, this is on your bucket list," Hield said. "You have to come in and you want to win a 3-point shootout. With a stacked field like that, it makes it even better. Pressure is on, and you've got to show up."

That was the theme of the night, all the way to the end.