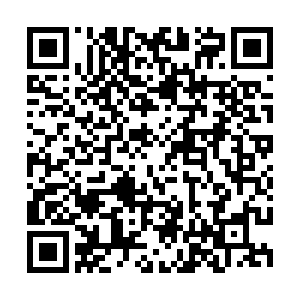 For some young Chinese professionals, the first day back at work after the Chinese New Year used to be the day they quit.

But this year, the coronavirus outbreak is forcing many to have second thoughts. With corporations putting their businesses on hold, and many forced to adjust their annual revenue target, job seekers are uncertain whether now is the right time to move.

According to a report by online recruitment platform Liepin, among the 3,000 professionals surveyed in the poll, more than half said they had plans for a career change after the Chinese New Year. Among them, 55 percent decided to delay their plans due to the outbreak. For the remaining 45 percent, who are still looking for new positions, hope for better opportunities is still cited as their biggest reason for a career change. 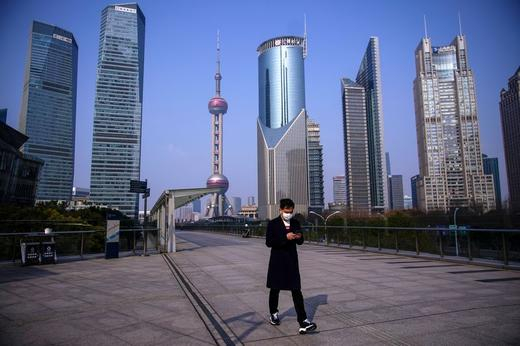 A man wearing a mask is seen at Lujiazui financial district in Pudong, Shanghai. /Reuters Photo

A man wearing a mask is seen at Lujiazui financial district in Pudong, Shanghai. /Reuters Photo

Wenyi, a 27-year-old at a tech company in China, who preferred not to reveal her last name, has been looking for a new position since late last year. Her plan is now on hold due to sudden change brought by the coronavirus. "A few companies which reached out to me before the Spring Festival holiday were not in touch anymore…they are not responding to my inquiries."

She said she sends in fewer applications now as fewere openings are listed in recruitment platforms. Only a great offer would mandate a move now, she noted, especially for those who are already employed and do not want to risk losing their current position.

Data from recruitment platform Boss Zhiping shows new positions in small companies are indeed on the decline. Among companies that employ less than 100 people, a 61 percent drop in demand for new employees was recorded in the 10 days after the Chinese New Year. 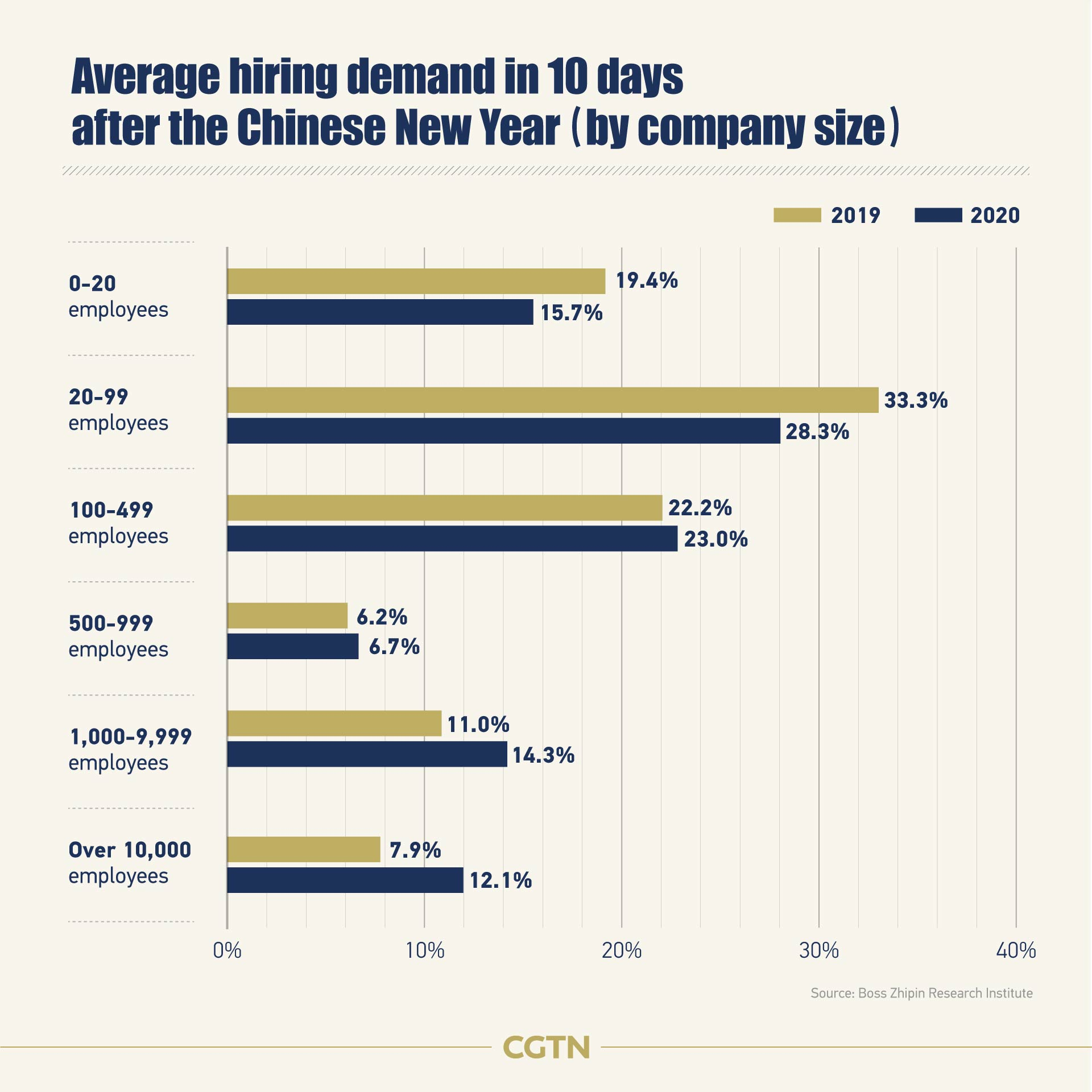 But it might be too early to say that China's job market is shrinking following the outbreak. Big corporations, on the other hand, have an increased appetite for talent. Data shows that entities that employ over 1,000 people, the hiring demand for new employees rose from 18.9 percent in 2019 to 26.4 percent in 2020. Among the industries that witnessed the greatest jump in demand are online service businesses, online education and digital healthcare.

The boom in online the service business, coupled with the temporary shutdown of offline service and retail business, led to the emergence of a new employment model termed "employee-sharing." Using this model, employees whose work is disrupted by the coronavirus outbreak are temporarily recruited by digital businesses to minimize the impact of the epidemic on employment and help address staff shortage in online business.

Hellobike, a bike-sharing company, announced on Monday that it is opening 8,000 positions for those unable to work due to the coronavirus outbreak in the country. The new hires would be responsible for managing the shared bikes, including identifying lost bikes, fixing the broken ones and transporting the bikes to the most needed travel hubs. 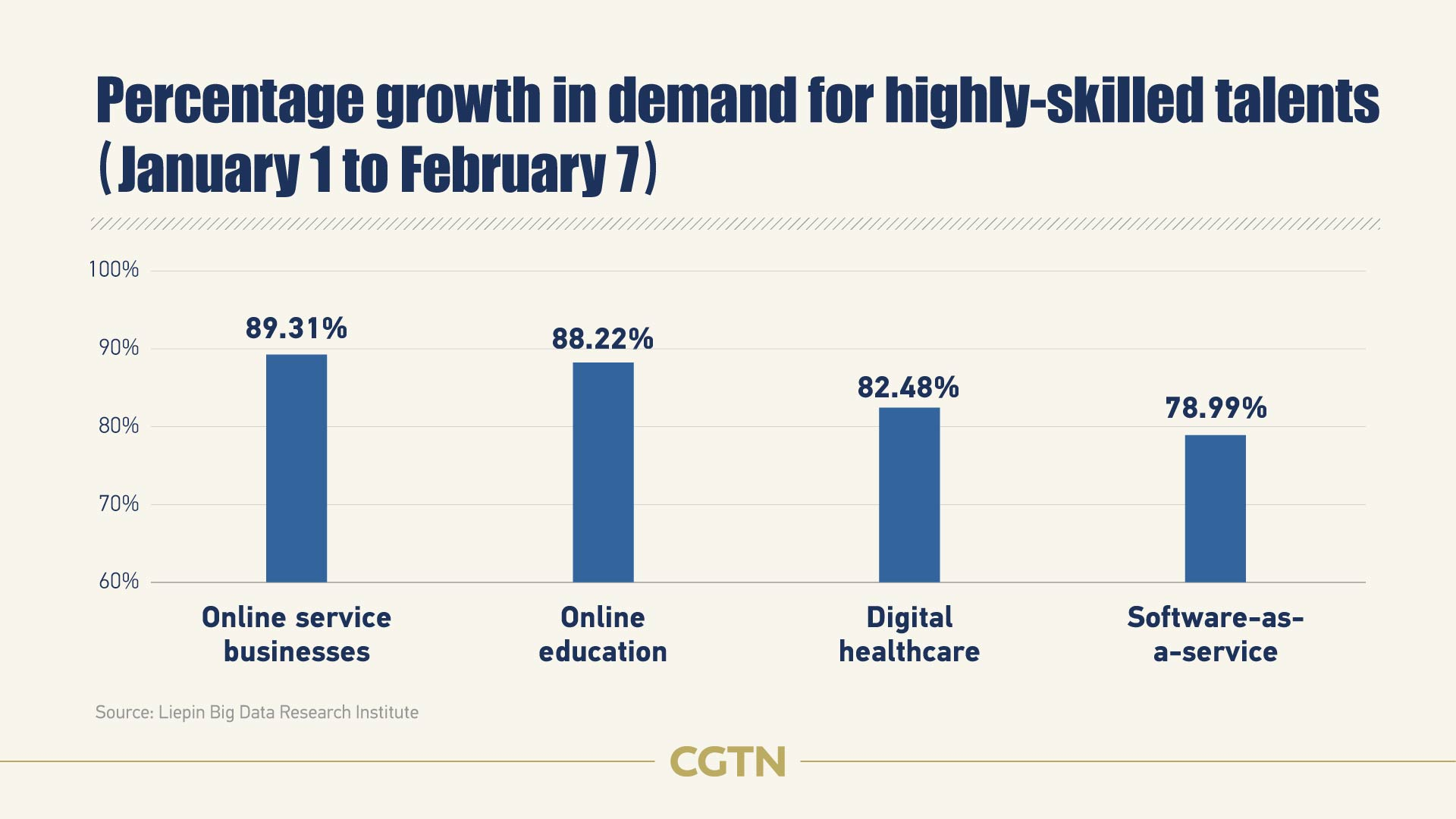 "We anticipate that the demand for bike-sharing is likely to increase more than 40 percent after most employees return to work," a representative of Hellobike told CGTN. "We now have a shortage of staff across China due to the surge in demand, and thus we are opening up 8,000 new positions for people affected by the outbreak."

Salary for those employees will be given on a weekly or biweekly basis, according to Hellobike, and if their old position becomes available after the normal operation of the business, they are free to go back to their old position. 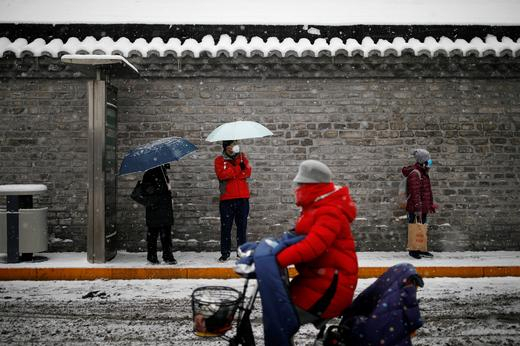 People wearing masks wait in the snow at a bus stop as the country fights an outbreak of the novel coronavirus on February 6, 2020. /Reuters Photo

People wearing masks wait in the snow at a bus stop as the country fights an outbreak of the novel coronavirus on February 6, 2020. /Reuters Photo

Since corporations want to resume business operations as soon as possible, they would prefer to hire more experienced workers as opposed to fresh graduates. Around the country, many corporations have postponed their campus recruitment campaigns and doubled down on recruiting highly-skilled candidates.

The trend is most visible in the booming internet industry, where the desire to get back to work is higher than ever. More than 60 percent of the hiring demand in China's internet companies target highly skilled workers with more than three years of experience, according to Boss Zhipin. "Fresh graduates and those with no prior work experience are likely to face more challenges," it said.

Amid the uncertainties, postponing job-hunting is now becoming more common for college graduates. When asked about her job-hunting plan, Estrella Pan, a final-year student at a college in Beijing, said she has already applied for graduate programs in overseas universities.

"I know this year it will be particularly hard for college graduates," she said. "Staying at school is one way to avoid the risk."