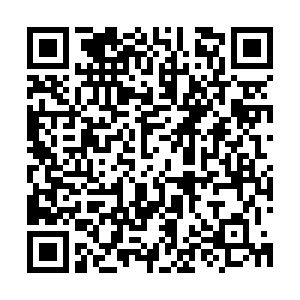 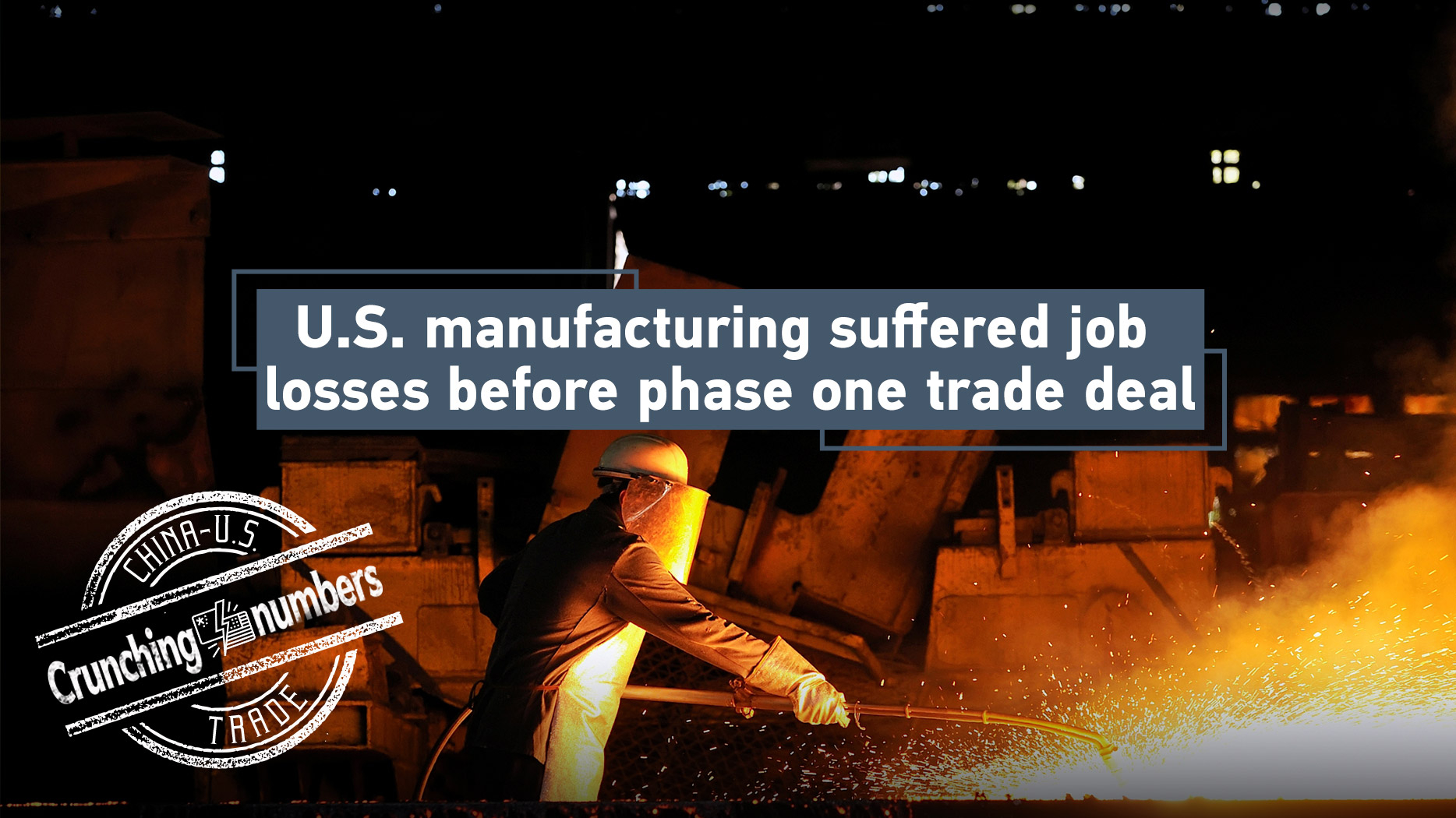 Impervious employment statistics came just three days after U.S. President Donald Trump's latest State of the Union address was delivered on February 4. Although described in his speech as being restored, the U.S. manufacturing industry actually performed the worst in employment out of 14 non-farm sectors in the first month of 2020.

A 10-year round peak and a decline in manufacturing employees experienced a short-term rebound, followed by an index of U.S. national factory activity that recently fell to the lowest reading in a decade.

But in manufacturing employment statistics, how did the China-U.S. trade war play a role? Some findings can be deduced from key indicators.

It's true that U.S. manufacturing expanded. Last November, employment numbers since 2008 reached a zenith of 12.9 million.

After a boom in 2018, the starting year of the trade war, jobs increase created by manufacturing spread over 14 subsectors in January 2019. But when it came to January 2020, contraction began emerging, with only seven subsectors hiring more workers than a year before.

What's worse, the manufacturing purchasing managers' index (PMI), indicating a sector's contraction when below 50.0, was recorded at 49.1 percent in August 2019, according to the ISM Report On Business. 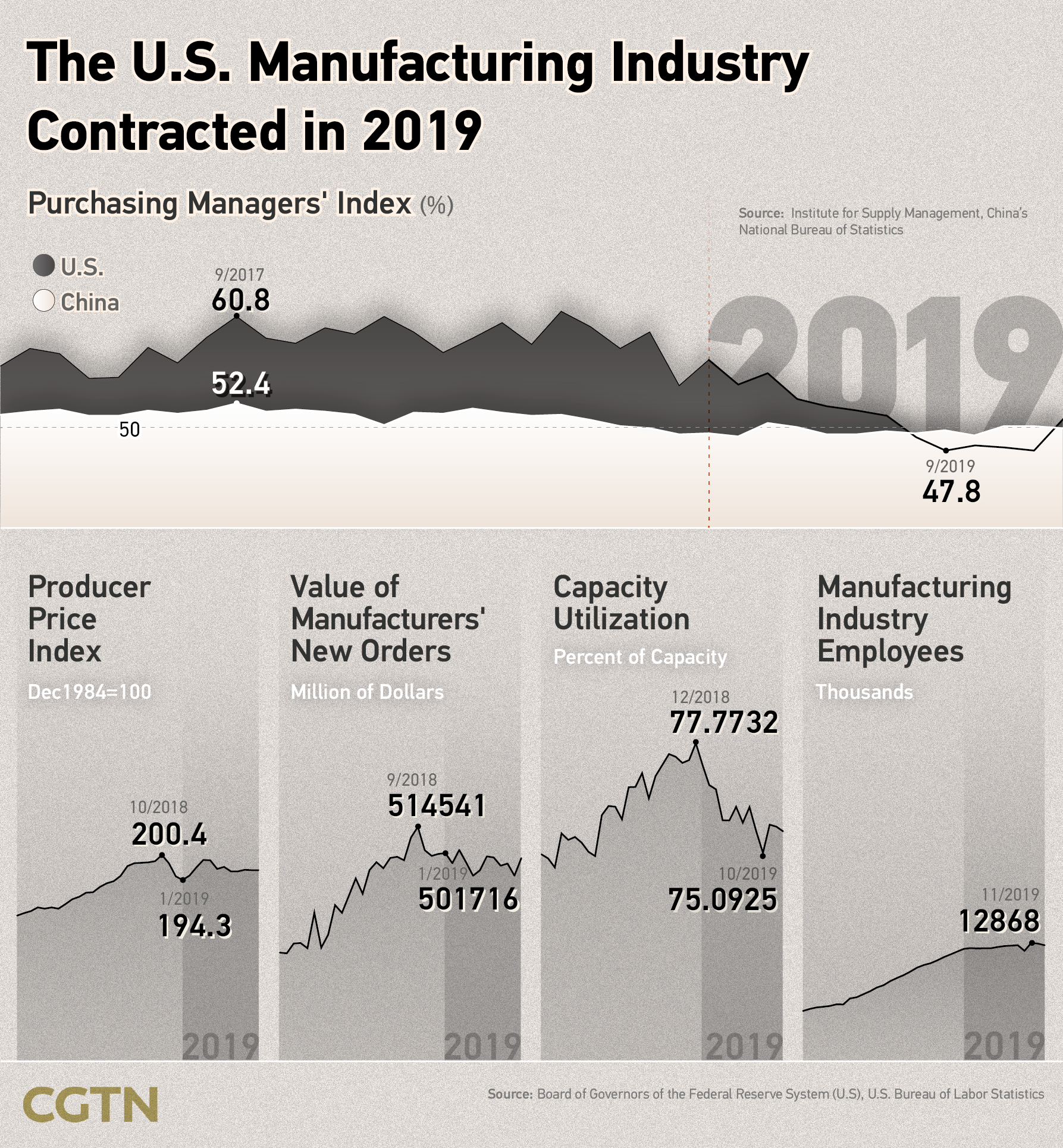 After the phase one trade deal was signed, this PMI reading slightly jumped over the line of 50.0, to 50.9 percent in January 2020, but uncertainties and risks remain.

In "hard manufacturing" sectors, Chinese goods took significant proportions of U.S. import commodities, and transient rebounds once brought considerable jobs back to U.S. factories after the trade war began. But now that seems to be over. 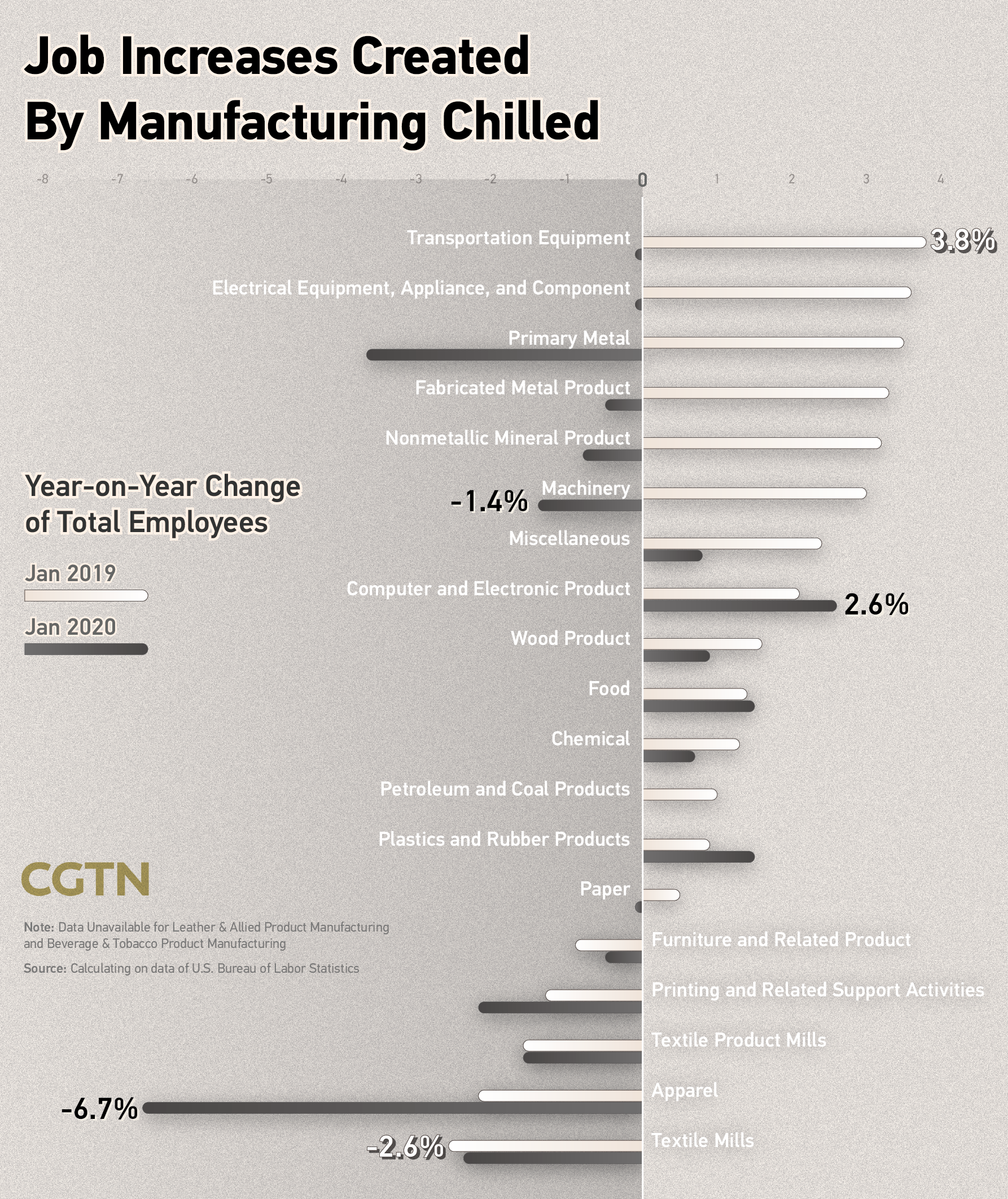 U.S. manufacturers are bringing jobs 'back' to Mexico

Furniture and fixtures manufacturing, which relied heavily on Chinese commodities before the trade war, illustrates this best. China's share of the U.S.'s customs import value dropped from 56.2 percent in 2017 to 44.8 percent in 2019. Meanwhile, as the U.S.'s customs import value from China decreased by 19.4 percent from 2017 to 2019, it climbed by 19.6 percent from Mexico in the same period.

Some positive numbers in U.S. manufacturing employment may have a limited correlation with trade between China and the U.S.

For example, the U.S. food and kindred products industry has been adding jobs for several years. While it only imported 6.2 percent of customs value from China in 2017, the fabricated metal products industry was as high as 32.5 percent.

The computer and electronic products manufacturing subsector was influenced by the trade war and showed good employment numbers. For those higher-skill jobs, 47,100 more employees were hired between March 2018 and January 2020. However, the industry's future still depends on the transformation of manufacturing and the improvement of employees.