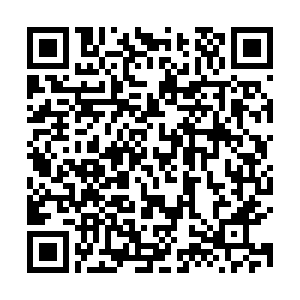 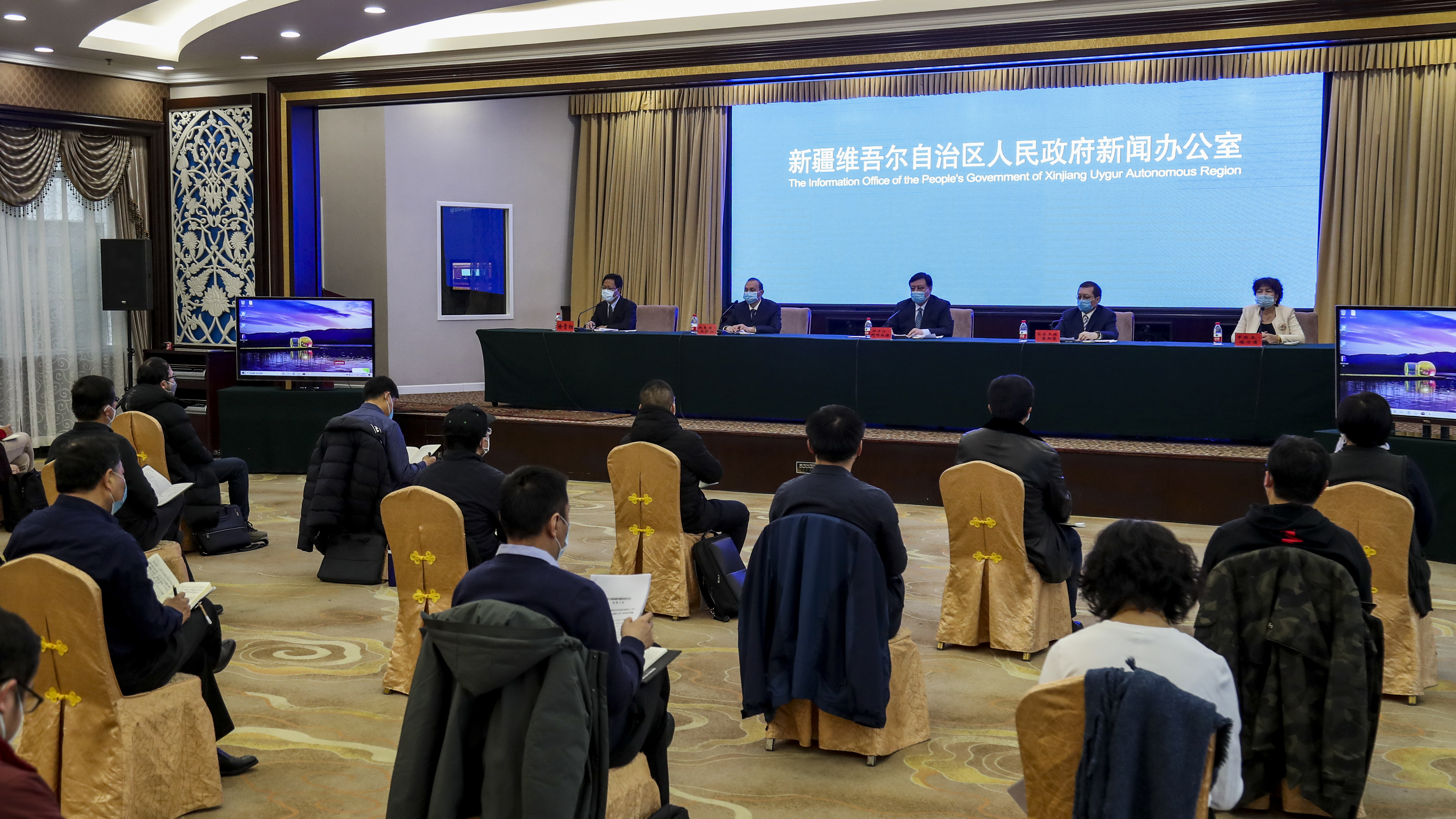 Press conference hosted by the Information Office of the People's Government of the Xinjiang Uygur Autonomous Region, March 3, 2020. /CGTN

Press conference hosted by the Information Office of the People's Government of the Xinjiang Uygur Autonomous Region, March 3, 2020. /CGTN

Elijan Anayit, spokesperson for the Information Office of the People's Government of Xinjiang, made the remarks at a press conference in response to a U.S. congressional report that alleged that Xinjiang has detained "permanent residents of the United States and Australia" in what it described as "mass internment camps," citing U.S. officials.

"I can tell you responsibly that no non-Chinese has ever received vocational education and training in Xinjiang," the spokesperson said.

"Xinjiang's judicial authorities deal with all those who committed unlawful and criminal acts in strict accordance with the law based on the nature and circumstances of their acts," he said.

Authorities also addressed questions from journalists on other Xinjiang-related issues.

Q: Recently, the US Congressional-Executive Commission (CECC) on China published its 2019 Report on China's Human Rights which includes some Xinjiang-related contents. What is your comment on it?

A: The Commission's Report on China's Human Rights smeared and groundlessly criticized the human rights situation in China with malicious intentions.

The Chinese government attaches great importance to human rights protection and promotion. For example, since the 18th CPC National Congress, living standards of people of all ethnic groups in Xinjiang have improved year after year. On top of that, the social status of residents in Xinjiang has improved dramatically. The entire region of Xinjiang is now covered by nine-year compulsory education, while south Xinjiang enjoys 15-year free education.

Freedom of religious belief in Xinjiang is also protected in accordance with the law. There are 24,000 mosques in Xinjiang, one for about every 500 Muslims, which have effectively met the believers' demand.

On the other hand, the U.S. is doing abysmally in its human rights record. Guantanamo military prison has become emblematic of the gross human rights abuses perpetrated by the U.S. government. Most of the prisoners have not been tried and a Pakistani man, who was falsely imprisoned, was tortured in Guantanamo, according to media reports.

With its abysmal human rights record, the U.S. turns a deaf ear to public opinion abroad. It withdrew from the UN Human Rights Council, reportedly to avoid being called out on its own alleged human-rights abuses.

Given that the U.S. has done poorly on human rights issues, it has no right and qualification to comment on other countries. The entire world bears witness to the development and progress in Xinjiang and this is a fact that will remain unchanged despite the rumor-mongering from the U.S.

Q: The 2019 Annual Report released by CECC alleges that "political re-education" in the so-called "mass internment camps" in Xinjiang aims at "political indoctrination and intimidation," rather than providing vocational skill education and employment training as argued by the Chinese authorities. What's your comment?

A: First of all, I want to emphasize that there were no so-called "mass internment camps" in Xinjiang. The vocational education and training centers legally established in Xinjiang were no different in essence from the community corrections enforced in the U.S., the Desistance and Disengagement Program in the U.K. and the de-radicalization centers in France, all being conducive attempt and proactive exploration for preventive counterterrorism and de-radicalization.

The vocational education and training centers in Xinjiang, through systematic education, have helped trainees improve their quality, awareness of rule of law, and ability to use the standard spoken and written Chinese. As governor Shohrat Zakir announced in late 2019, all trainees at the centers had graduated and realized stable employment with assistance of the government.

Q: The CECC's 2019 Annual Report alleges that Xinjiang arbitrarily detained ethnic minorities including the Uygur and tortured the detainees. It named two Uygurs who it alleged died because of their staying in the vocational education and training centers. Is it true?

A: Xinjiang fights terrorism and extremism in accordance with law. It doesn't target any ethnicity, and everyone is held equal before the law. There is no such thing as "arbitrary detentions of ethnic minorities including the Uygurs."

The allegations in the CECC's report that two Uygurs died in the vocational education and training centers are completely fabricated. Nurmuhemmet Tohti, who the report alleged died in the center, has never studied in the center. On May 31, 2019, he died of a heart attack after emergency rescue failed.

Mutellip Nurmehmet, the other Uygur identified in the report, had never studied in any education and training center before he died of alcohol intoxication.

Q: The CECC's 2019 Annual Report alleged that a Uygur businessman was sentenced to death for an unapproved pilgrimage to Saudi Arabia. What's your comment?

A: Respecting and protecting the freedom of religious belief is a basic national policy of the Chinese government. Pilgrimage to Mecca is especially supported by the government. Each year, government arranges chartered airplanes for Muslims to make pilgrimages to Mecca in Saudi Arabia.

The Uygur businessman identified in the report, Abdughappar Abdurusul, is now in the second-hand apartment businesses and leads a normal life. I don't know where the U.S. heard of the rumor that he was sentenced to death because of an unapproved pilgrimage to Saudi Arabia.

Q: It was mentioned in the Commission's report that a Chinese Kazakh had been held in a vocational education and training center for nearly two years before he returned to Kazakhstan. After release, he suffered memory impairment, among other health problems. Can you give more information on this?

A: Zharqynbek Otan is a 33-year-old Kazakh from Zhaosu County of Ili Kazakh Prefecture, Xinjiang. He has been living in his father's house in Zhaosu County ever since he entered China via Horgas Port from Kazakhstan in 2017. His personal freedom has never been restricted and he never studied at any vocational education and training center

His family members in China affirmed that he was in good health condition with no memory problems before he left, let alone such a thing that he barely recognizes his family members.

Q: The 2019 Annual Report urges the Organization of Islamic Cooperation to exert pressure on China, calling on member states to criticize China for its "massive internment of Muslims and violation of human rights." What is your response?

A: Since the end of 2018, over 1,000 people from 90 countries have visited Xinjiang in more than 70 groups. They include foreign diplomatic envoys to China, UN officials, Geneva-based senior diplomats of various countries, journalists and some from religious organizations.

They, with those from Muslim countries, have all recognized Xinjiang's vocational education and training work have made an important contribution to international efforts to fight terrorism and extremism, and generated valuable experience that is of great reference value.

In contrast, Muslims in the U.S. are suffering from increasing discrimination. The U.S.'s track record of leaving massive casualties and countless displacement in the Middle East also means it is in no position to criticize China.

Q: Some Western media alleged that students from Xinjiang have been detained in a few schools in Wuhan since the lockdown of the city. A Turkish website alleged that the Chinese government shipped 50 Uygur students from the Turpan area to the virus-hit City of Beihai in the Guangxi Zhuang Autonomous Region, when the virus is spreading further. Could you please verify the above allegations?

A: First, I would like to brief you about the real picture of Xinjiang classes in Wuhan.

There are three provincial demonstration high schools – Wuhan Railway High School, Wuhan East Lake High School and Wuhan No. 1 High School – that have classes for a large number of students from Xinjiang.

Since the outbreak of COVID-19, the educational departments of Hubei Province, the Xinjiang Uygur Autonomous Region and Wuhan City have attached great importance to preventing these students in Wuhan from being infected.

Thanks to the help and care of the Party committees and the government at different levels as well as the people from all walks of life, none of these students has been confirmed or suspected to be infected with the novel coronavirus.

The article which claims that despite the epidemic spread, the Chinese government transferred about 50 Uygur students from Turpan Prefecture to Guangxi's Beihai City was completely groundless. It is nothing but an outright lie.