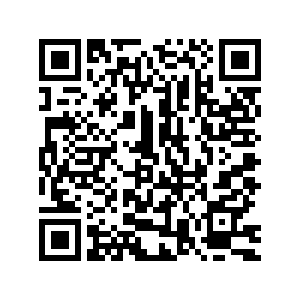 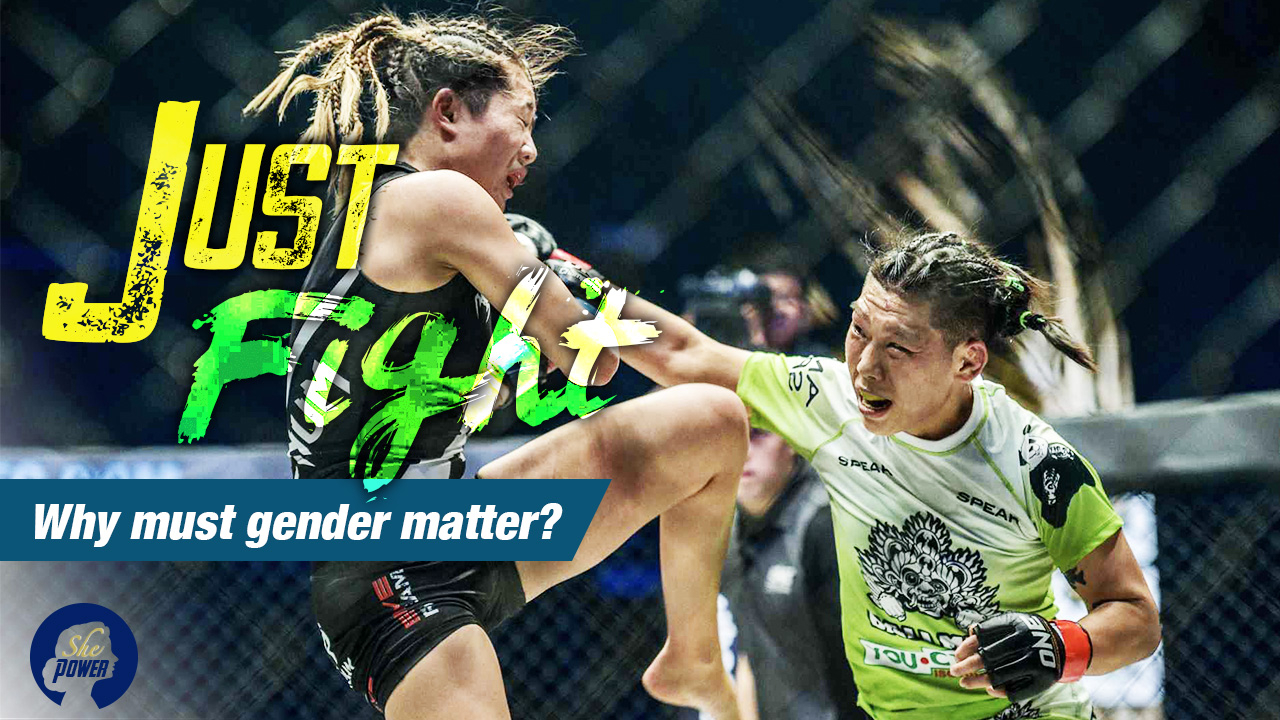 A female fighter could never have imagined that when she opened her social media account after winning a championship, the first comment coming to her eyes would be: "Could you be more feminine?"

However, male fighters, or any male athlete, may never face this kind of embarrassing moment. Their triumphs are much purer as audiences will applaud for them without judging their behavior based on social norms or stereotypes.

The female fighter mentioned above was Xiong Jingnan, who obtained China's first MMA belt at the ONE Championship, a popular MMA promotion in Asia, during a bout against Tiffany Teo of Singapore for the vacant women's strawweight champion in Jakarta, Indonesia, on January 20, 2018.

Since then, she has successfully defended her title three times, including giving Angela Lee, the ONE Championship women's atomweight champion, her first career loss. 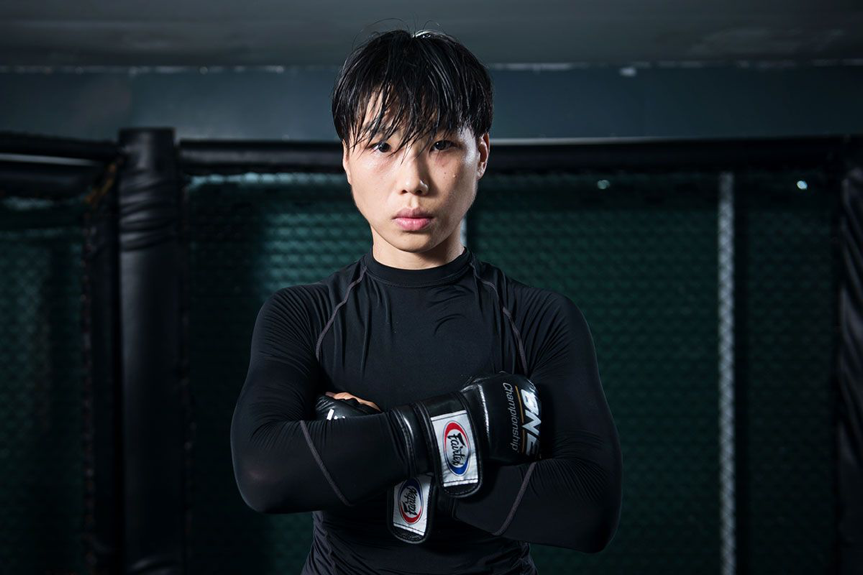 Xiong Jingnan. /Courtesy of ONE Championship

Xiong Jingnan. /Courtesy of ONE Championship

Xiong was born on January 12, 1988, in Weishanhu, Jining City, in east China's Shandong Province. She's sported a short haircut since a very young age, and has heard comments such as "Why do you not look like a girl?" since then.

She would asked herself, "What should a girl be?" But she knew very clearly the answer for her was not wearing a dress, keeping her hair long or cheering for boys beside the pitch. "I wanted to be the person running on the pitch," she thought firmly.

During her teenage years, Xiong showed her excellent sports talent, and was sent by her father to the provincial boxing team. That set the course for Xiong's career. 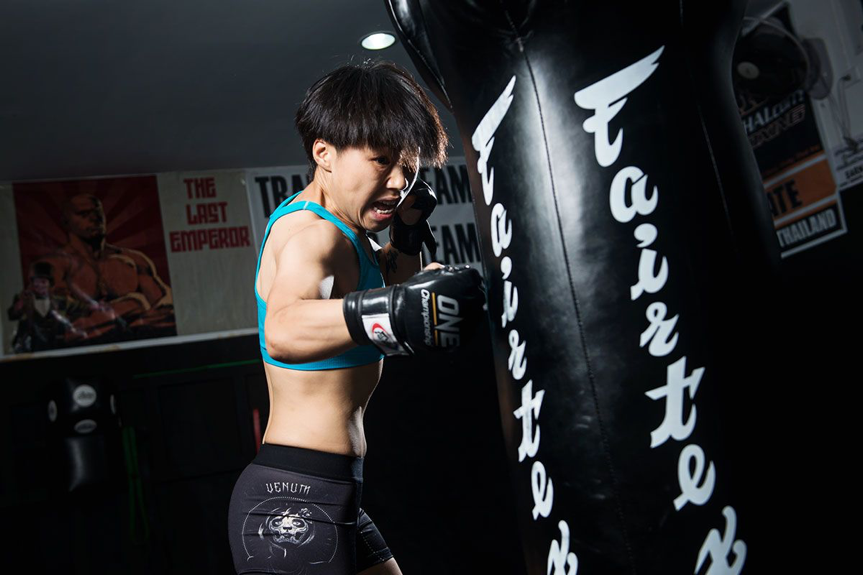 Xiong Jingnan punches a heavy bag. /Courtesy of ONE Championship

Xiong Jingnan punches a heavy bag. /Courtesy of ONE Championship

As a system-formed boxer, Xiong achieved her goal of winning a national championship in 2008. But later, she decided to drop the "steel bowl" and went into professional mixed martial arts (MMA).

"I think MMA is fiercer, and I like to challenge myself," Xiong tells the media whenever she's asked why she changed her career path.

"I didn't know anything about leg kicks and wrestling, even fighting without shoes, I never knew before I began practicing MMA," Xiong said, recalling the difficulties she met.

During that time, Xiong thought of withdrawing from MMA many times, but she still kept training hard. Finally, she honed her abilities enough to step onto the MMA stage. 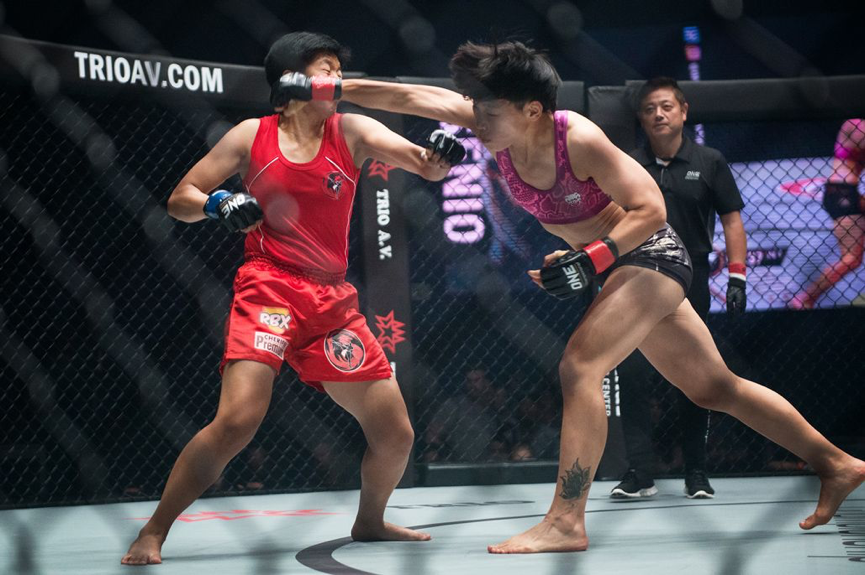 Xiong Jingnan (R) punches her opponent. /Courtesy of ONE Championship

Xiong Jingnan (R) punches her opponent. /Courtesy of ONE Championship

Five years ago, there was a dark spell for Xiong. Her grandparents passed away during her preparation time for a fight, but until she won the match, she didn't know the sad news as all of her family kept it secret.

Soon, Xiong, who was still in mourning, sustained a heavy injury, practically paralyzing her lower body. Thus, the fighter was confined to a wheelchair.

Her doctor told her that she might not be able to move normally again, let alone continue her professional career. One of her coaches even said, "This is the world of men, you're a little girl, go back home and do something else."

That shook Xiong's heart, but it was the last time in her life. 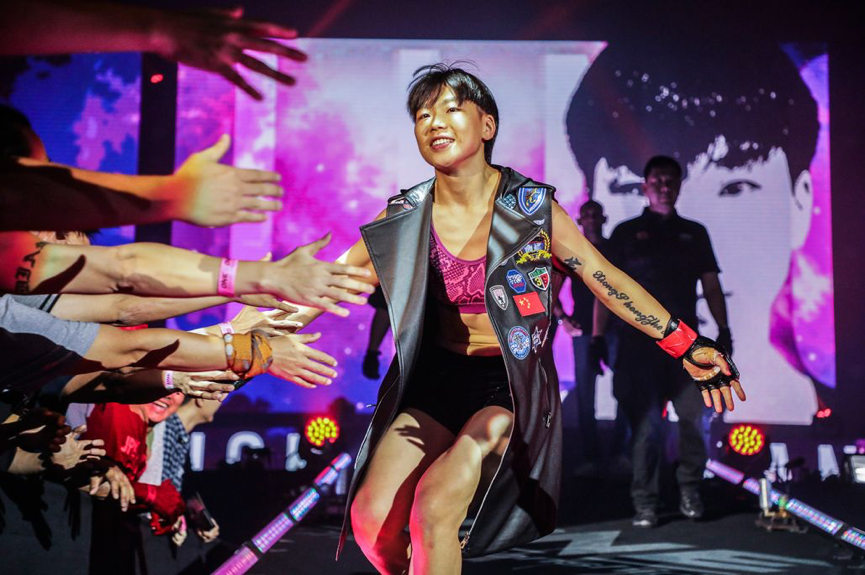 Xiong Jingnan enters an event. /Courtesy of ONE Championship

Xiong Jingnan enters an event. /Courtesy of ONE Championship

To recover from the injury, Xiong decided to go to Thailand to do the rehabilitation.

With maximum effort, she returned to the mat in September 2016, and one year later signed with ONE Championship.

Her rival was April Osenio from a powerful Filipino sanda team, and Xiong was the underdog before the match.

Xiong ended the match with a knockout four minutes after the opening bell, showcasing her exquisite boxing skills.

And that prompted the ONE Championship to give her a title bout against Teo, in the history-making second match.

In that fight, Xiong destroyed Teo, who sustained a serious injury during the bout and has only fought twice since.

Xiong's two fights against Angela Lee of Hawaii, the dominant power in the ONE Championship's women's atomweight division, made her a household name. 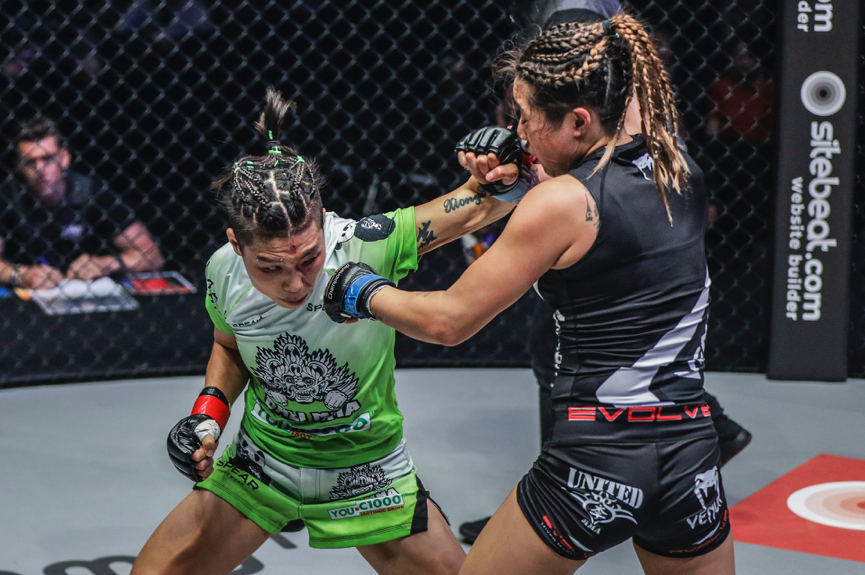 In their first encounter on March 31, 2019, Lee went up to Xiong's strawweight division and showed her BJJ black belt's skills, nearly forcing Xiong to submit in the fourth round. But Xiong overcame it and knocked her out in the fifth round.

Even though Xiong didn't conquer Lee as well in the latter's division later, the two fights with Lee broadened her fame.

For now, Xiong still keeps her short hair, without fearing anyone's judgment. Her actions show women that they can be whatever they want to be, and that women have the power to lead the world.