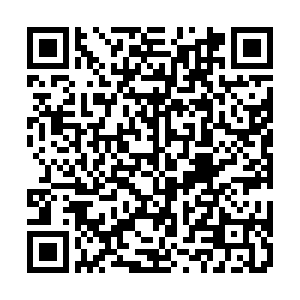 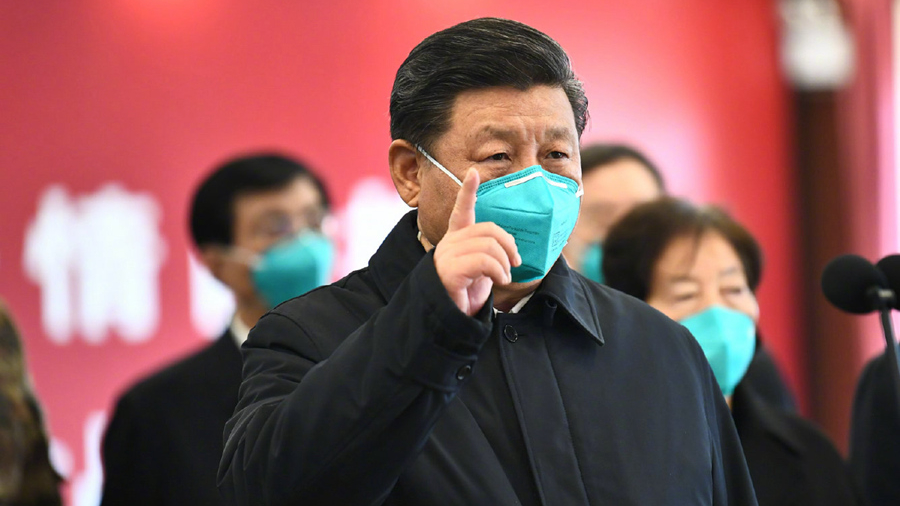 Chinese President Xi Jinping vowed on Tuesday to resolutely fight for a victory in the war against the novel coronavirus disease (COVID-19) during his inspection in the outbreak epicenter Wuhan, of central China's Hubei Province.

Xi, also general secretary of the Communist Party of China Central Committee and chairman of the Central Military Commission, called for firm, solid and meticulous prevention and control efforts to defend Hubei and Wuhan.

After hard work, the situation in Hubei and Wuhan has shown positive changes with important progress, but the prevention and control task remains arduous, Xi said.

Xi stressed continuing to take epidemic prevention and control as a task of paramount importance.

Speaking highly of the sacrifice of Wuhan people, Xi said with their concrete actions, Wuhan people have demonstrated the strength and spirit of China, as well as the Chinese people's love for family and the nation, which enables them to stick together through thick and thin. 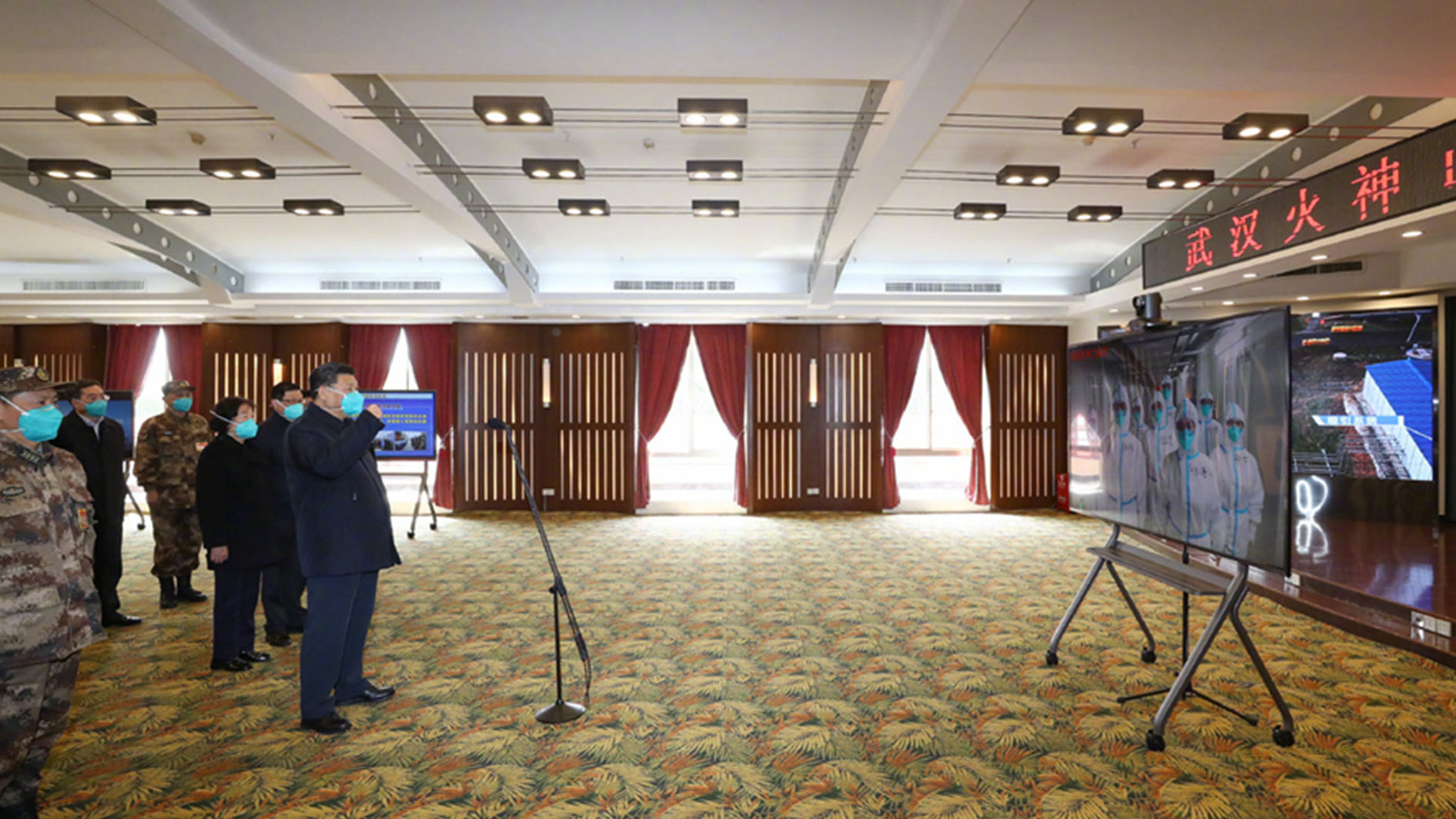 When visiting Huoshenshan Hospital, Xi learned about its operation, treatment of patients, protection for medical workers and scientific research.

Huoshenshan is a 1,000-bed hospital built from scratch in just 10 days to treat COVID-19 patients.

Xi said since the outbreak of the disease, a great number of medical workers including those from the military have rushed to Wuhan City and Hubei Province without fear, devoted themselves to epidemic prevention and control, and fought day and night.

Xi praised their hard work and great contributions to prevention and control work, saying they are "messengers of light, messengers of hope, the most beautiful angels, and true heroes!"

He expressed his gratitude on behalf of the Party and Chinese people.

Xi, wearing a mask, also spoke via video-link to frontline medical workers at the hospital.

He sent regards to medical workers who have been fighting the epidemic on the front line day and night, encouraging them to firm up confidence in defeating the epidemic.

He urged the medics to strengthen self-protection and relevant authorities to provide sufficient medical supplies, living materials, temporary salary subsidies and so on, to relieve their worries. 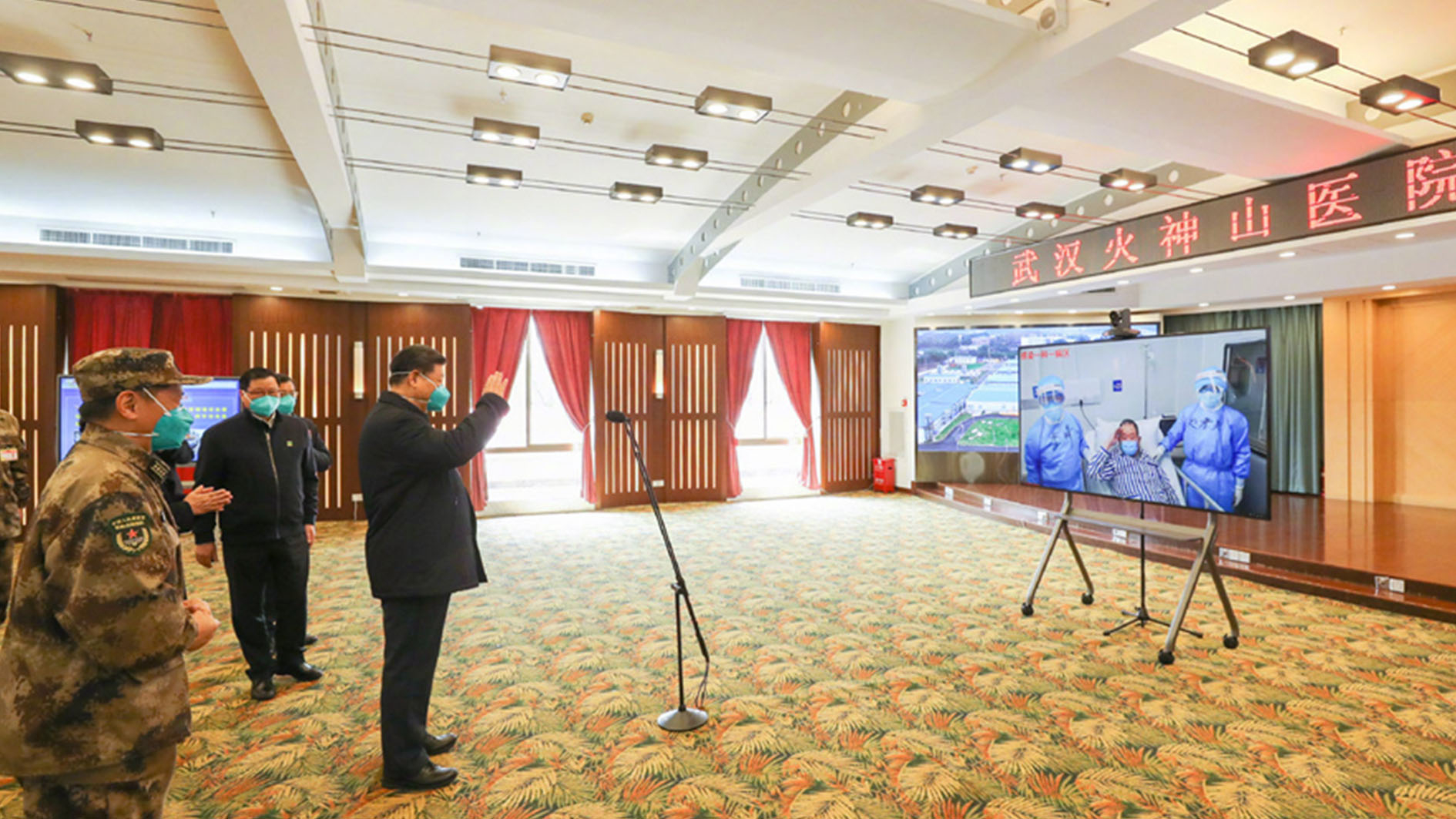 During talks with patients at the hospital via video calls, Xi said he was glad to learn that they were receiving effective treatment and their conditions were improving.

Since the epidemic broke out, China has put people's lives and health at the first place and adopted swift measures to curb the spread of the disease, he said.

Xi called for more care for those infected and their families, and asked the patients to have the confidence to win, be optimistic and cooperate with the treatment.

Xi urges medics to fight till the end

He also met with military medics in Hubei as well as medical representatives from all over the country to support Hubei.

Xi said the medical workers' selfless devotion to epidemic prevention and control not only touched Chinese people but the whole world.

He urged them to not give up, fight till the end, and at the same time, take care of themselves.

He called on relevant authorities to improve the work conditions of frontline medical staff, ensure they have enough rest and ensure safety and health. 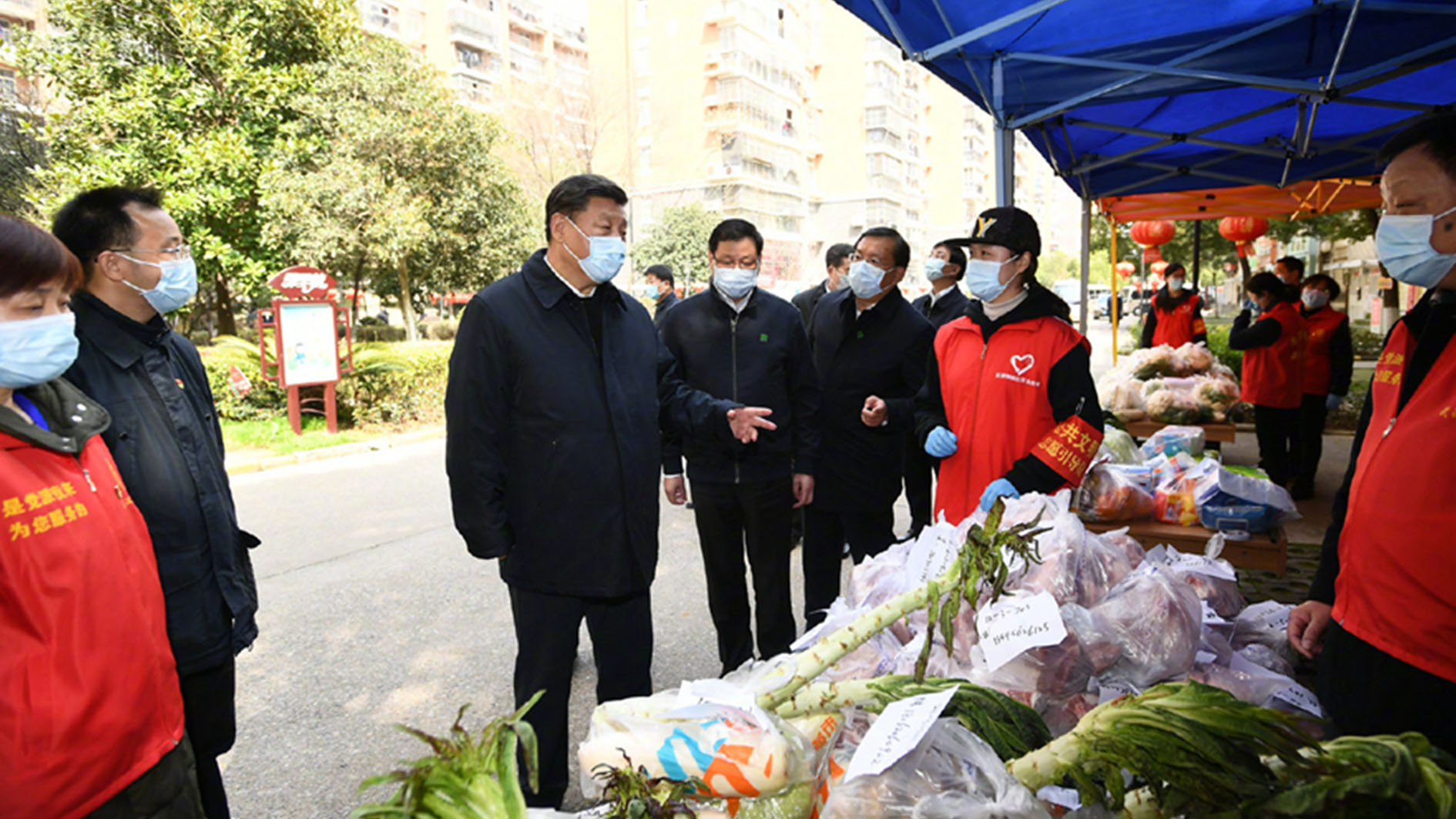 Following a stop at Huoshenshan Hospital, President Xi visited residents under quarantine at home in a local community.

He learned about community-based efforts to prevent the epidemic and ensure residents received their daily necessities.

Noting that the community stands at the forefront of the epidemic fight, Xi spoke highly of community workers' sacrifices and contributions.

There are two positions to fight against the epidemic, Xi pointed out, one is the hospital where the wounded heal and the dying are rescued, and another is the community, a key place for stopping the spread of COVID-19.

He told community workers to rely on the strength of the people to win the people's war of epidemic prevention and control.

Party organizations and members at the primary level should play the vanguard roles to broadly mobilize, organize and unite the people in joint prevention and control to fortify a strong defense by mass participation, he added. 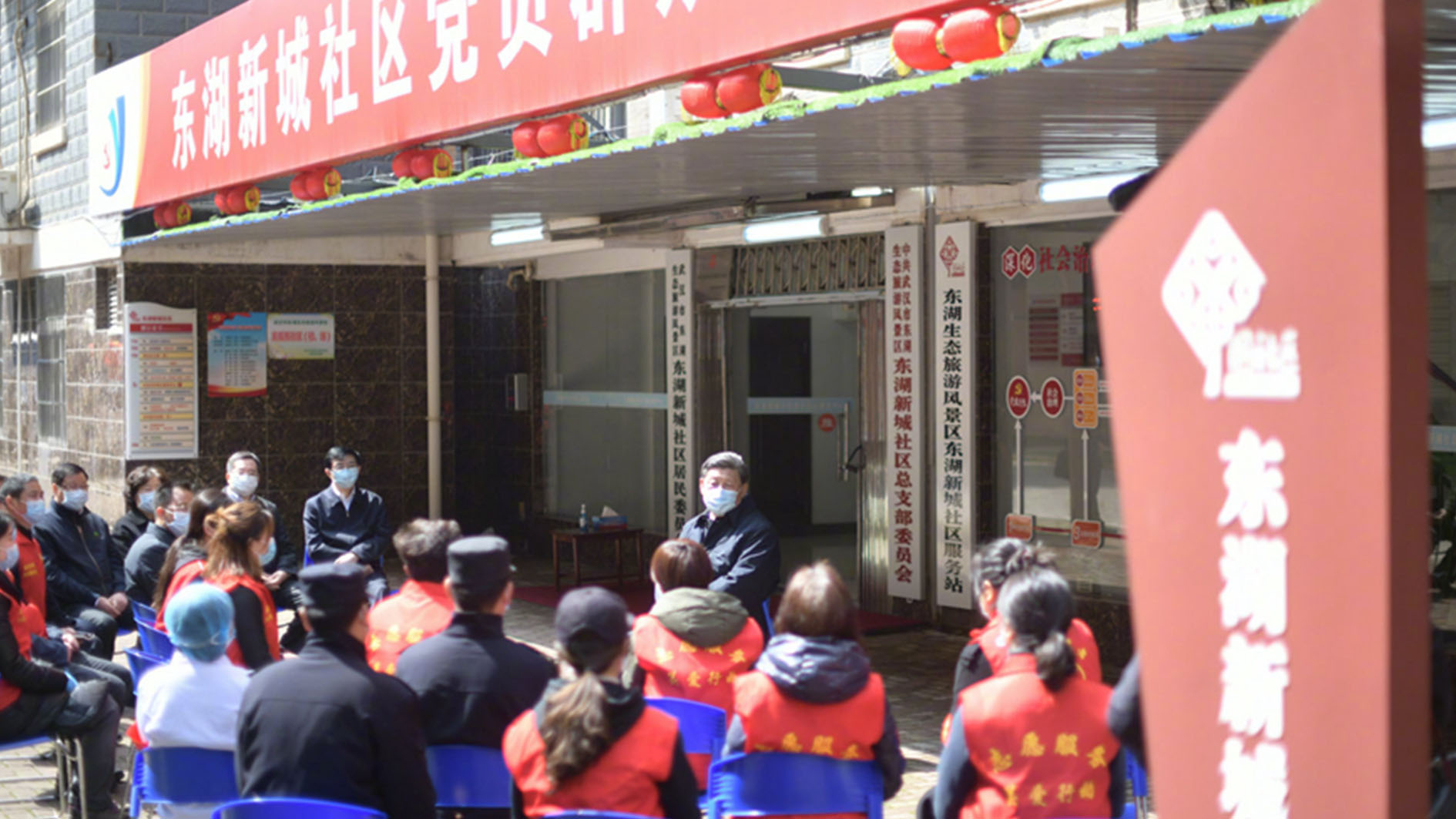 After the inspection, Xi presided over a meeting and listened to reports on epidemic prevention and control work in Hubei Province.

The Chinese president stressed unremitting efforts in the prevention and control of the COVID-19 epidemic and coordination in advancing economic and social development.

Xi said a positive trend has emerged as the epidemic prevention and control situation has seen steady improvement in Hubei Province but he warned that the situation remains grim and complex.

Medical treatment should be put in the first place, he pointed out, calling for improving the recovery rate and further reducing the mortality rate through the application of advanced equipment, technologies and medicines.

It is now a most crucial moment to prevent the spread of COVID-19, he stressed, and added that efforts are required to carry out personnel management and guarantee the safe return of migrant workers.

He also called to enhance medical support to rural areas, provide assistance to the disabled, the elderly and other vulnerable groups and stressed the provision of psychological counseling.

The epidemic will not affect the fundamentals of China's steady and long-term sound economic development, Xi made his remarks during the meeting.

He called for firm and meticulous implementation of the supporting policies issued by the country and adopt targeted measures to assist enterprises, stabilize employment and create more jobs.

He said the prevention and control of the COVID-19 is a test for China's system and capacity for governance, which has brought both experience and lessons.

Xi urged Party organizations at all levels and Party members and officials to stay true to the Party's founding mission and shoulder responsibilities and boost the ability to adopt sound prevention and control measures, make overall planning and carry out sound implementation.