Team of scientists, including from China, discover smallest-known dinosaur embedded in amber
CGTN 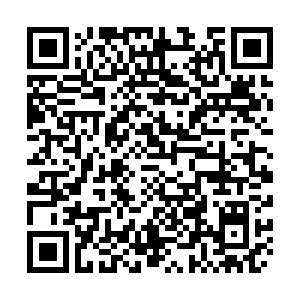 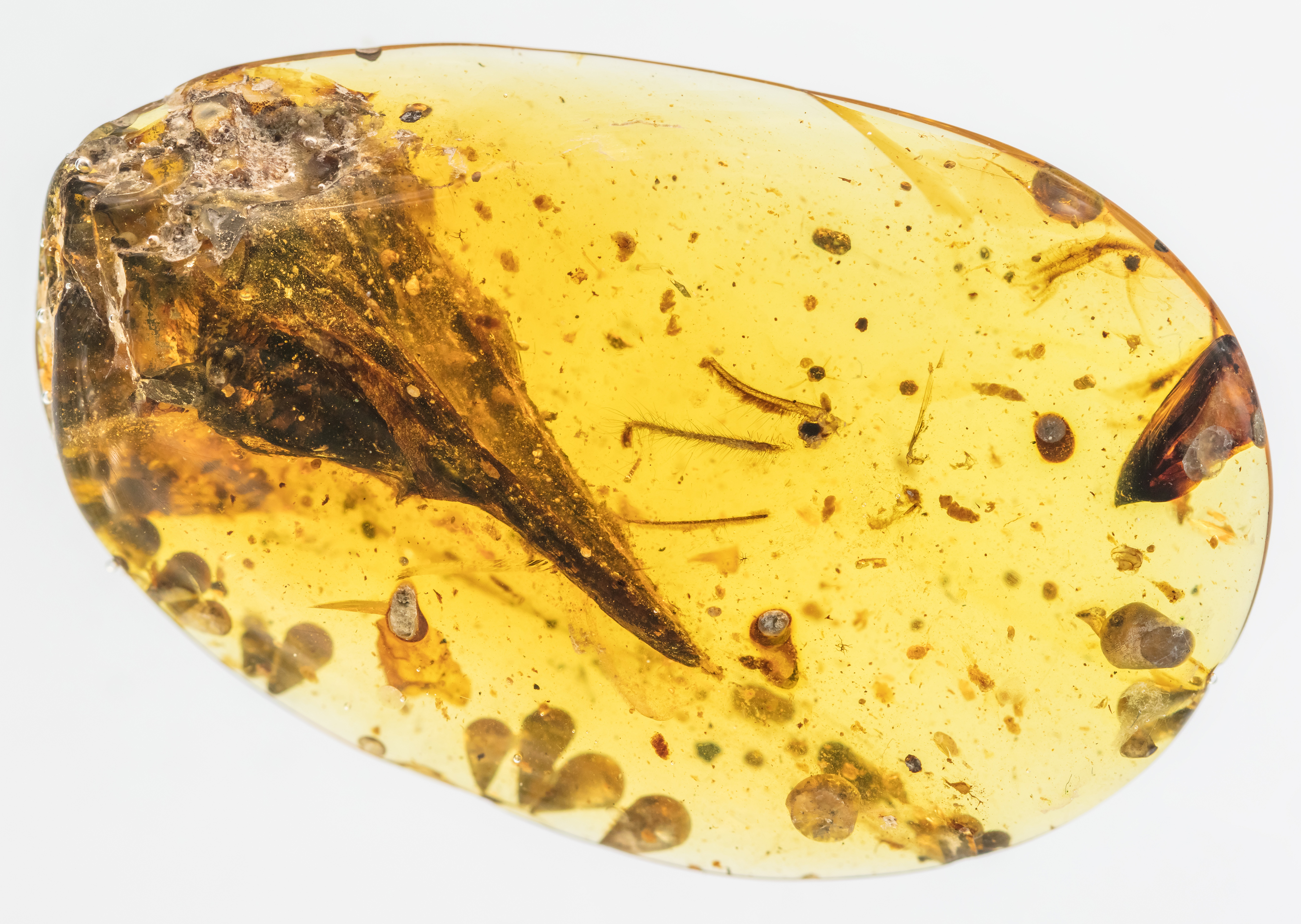 The skull of the smallest-known dinosaur embedded in amber. /Xing Lida

The skull of the smallest-known dinosaur embedded in amber. /Xing Lida

Scientists are marveling over the exquisitely preserved skull of what appears to be the smallest-known bird – tinier than the smallest hummingbird – encased in 99-million-year-old amber and boasting many odd traits including jaws studded with numerous puny teeth. Dubbed Oculudentavis khaungraaethis, the bird is also the smallest dinosaur ever to be discovered, and older than the famous T-Rex.

The research was conducted by a team of Chinese, American and Canadian scientists and led by Xing Lida, a paleontologist and associate professor at China University of Geosciences in Beijing. Their findings were published in the journal Nature this week. 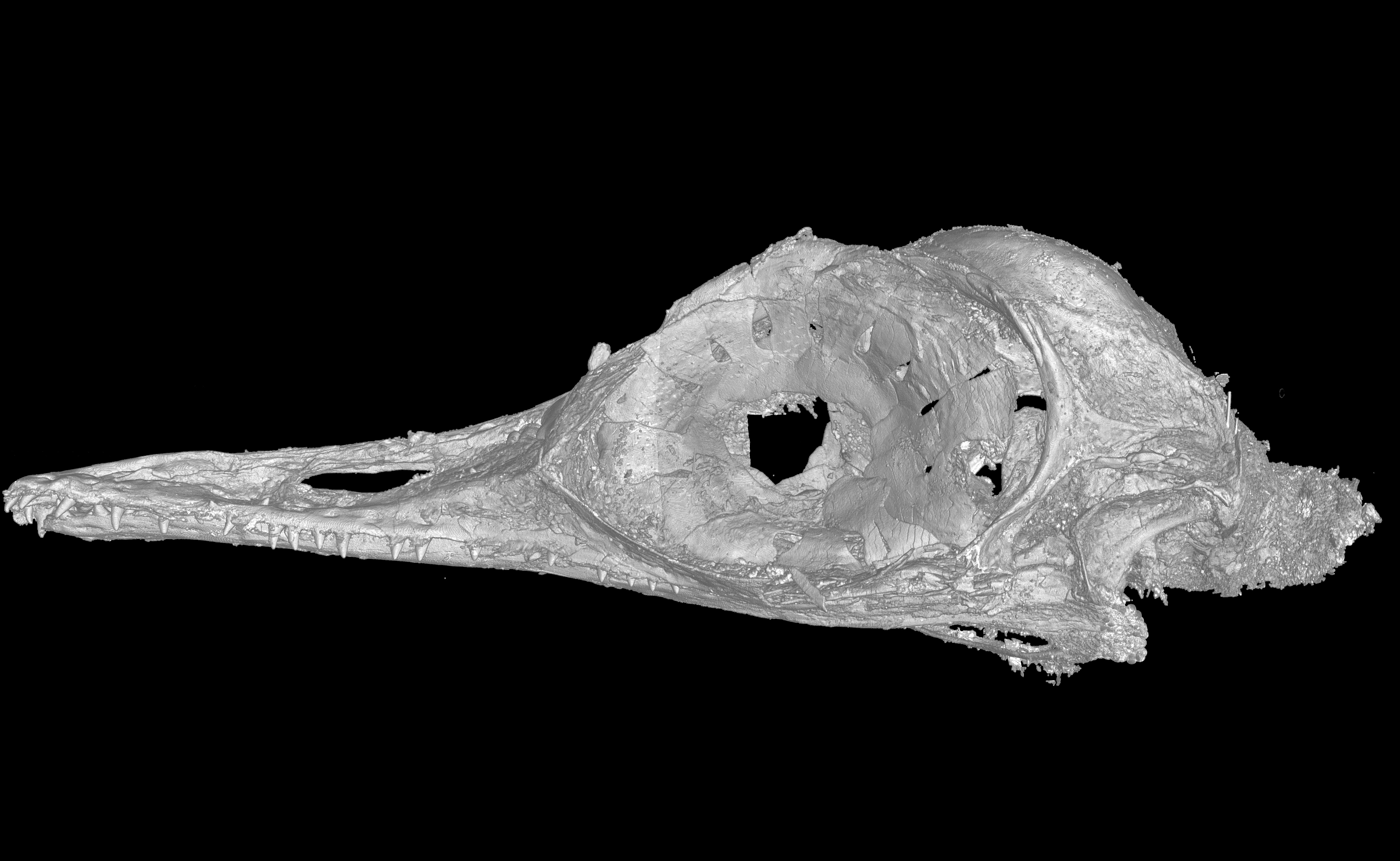 A CT image of the bird's skull. /Xing Lida

A CT image of the bird's skull. /Xing Lida 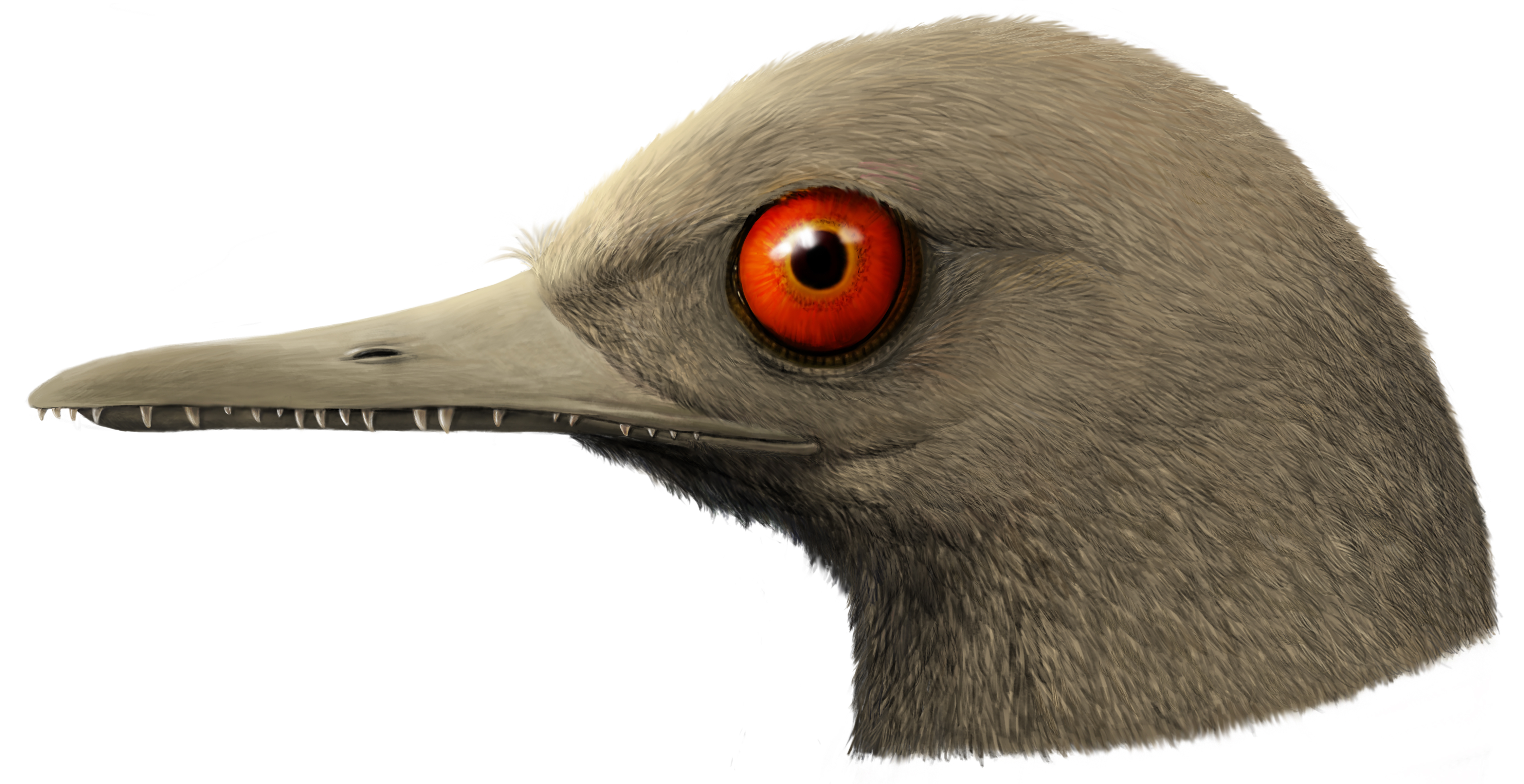 A restoration image of the ancient bird's head. /Xing Lida

A restoration image of the ancient bird's head. /Xing Lida

Oculudentavis khaungraae means "eye-tooth bird" and lived during the Cretaceous Period in what is now northern Myanmar, the researchers said on Wednesday. Its skull measures about 7.1 millimeters long, but none of the rest of the body was preserved.

The researchers estimated that Oculudentavis weighed about 28 grams and measured 5 cm in length, including a hypothetical bony tail. The specimen was perfectly preserved, offering researchers a startlingly clear view of its features.

"I was totally blown away," said paleontologist Jingmai O'Connor of the Institute of Vertebrate Paleontology and Paleoanthropology in Beijing, describing her reaction upon seeing the fossil. "It's probably the most beautifully preserved Mesozoic bird skull I've ever seen, and it's so weird."

The Mesozoic Era was the age of the dinosaurs, lasting from about 252 to 66 million years ago.

Oculudentavis appeared to be smaller than a bee hummingbird, until now considered the world's smallest bird.

Oculudentavis shares few similarities, aside from size, with hummingbirds, which like all modern birds lack teeth and eat nectar. Many Mesozoic birds had teeth, but Oculudentavis possessed the most – about 100, with a conical shape and sharp ridges on the edges. Oculudentavis likely hunted insects. Hummingbirds have long beaks, unlike Oculudentavis. 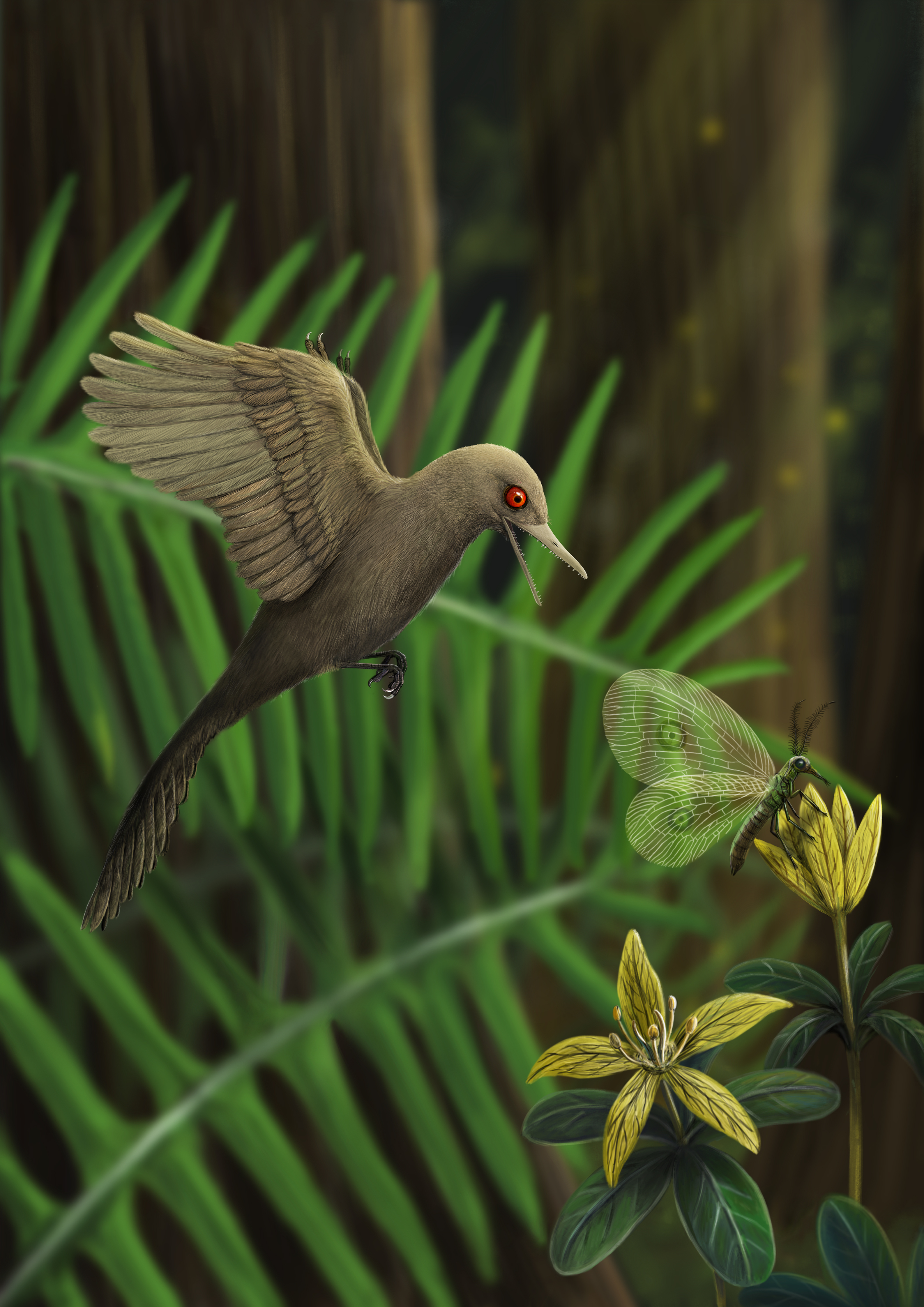 A restoration image of Oculudentavis khaungraae and the habitat it used to live in. /Xing Lida

A restoration image of Oculudentavis khaungraae and the habitat it used to live in. /Xing Lida

"The size diversity hints at the amazing biology of dinosaurs, capable of sustaining such a diversity of forms," said O'Connor.

Despite its minuscule size, researchers believe it hunted insects using its sharp teeth and large eyes to home in on prey. Its eyes resembled those of owls, with the eye bones forming a cone, indicating acute vision, O'Connor said. Unlike birds of prey with forward-facing eyes and binocular vision enabling good depth perception, the eyes of Oculudentavis faced to the sides and bulged out of its head.

The small size of the aperture of the eye bones indicates Oculudentavis was active during daytime. 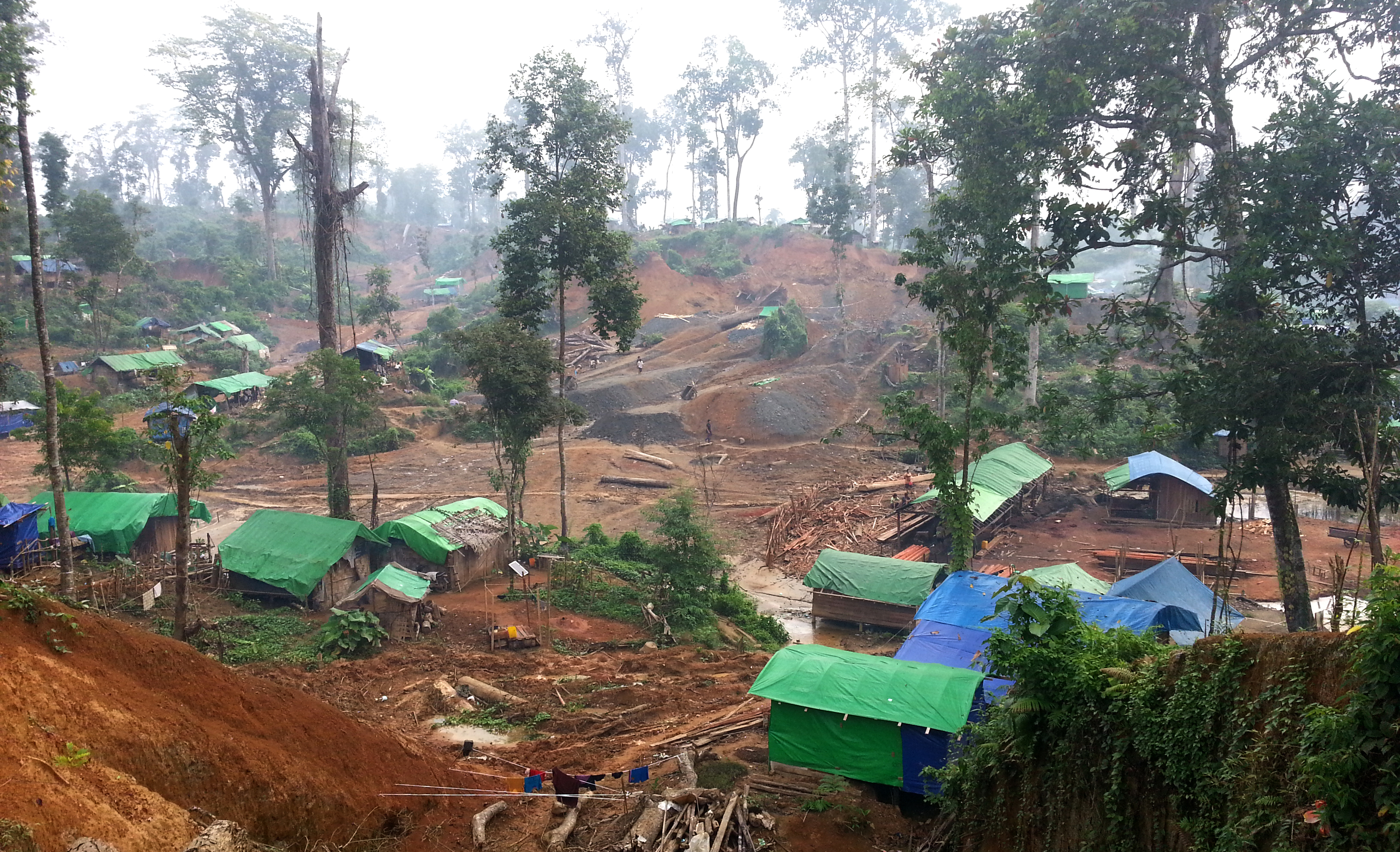 The mine in northern Myanmar where the amber was found. /Xing Lida

The mine in northern Myanmar where the amber was found. /Xing Lida

"Amber is just amazing as a preservational medium," O'Connor said. "If the animal does not decay much before getting entombed in resin, the preservation is phenomenal: All the soft tissues preserved in three dimensions, like a window into an ancient world."

(All photos belong to Xing Lida, associate professor at China University of Geosciences in Beijing, who participated in the research)