Graphics: How is Iran responding to COVID-19?
By Hu Yiwei

Iran saw a record rise in novel coronavirus infections on Friday: 1,289 more people fell victim to the COVID-19 outbreak, bringing the total confirmed cases to over 11,000, according to the country's health ministry. Iran reported its first two confirmed cases on February 19 in the holy city of Qom. The virus soon spread across the country.

Most of the patients are in the capital Tehran, followed by the nearby province of Mazandaran. 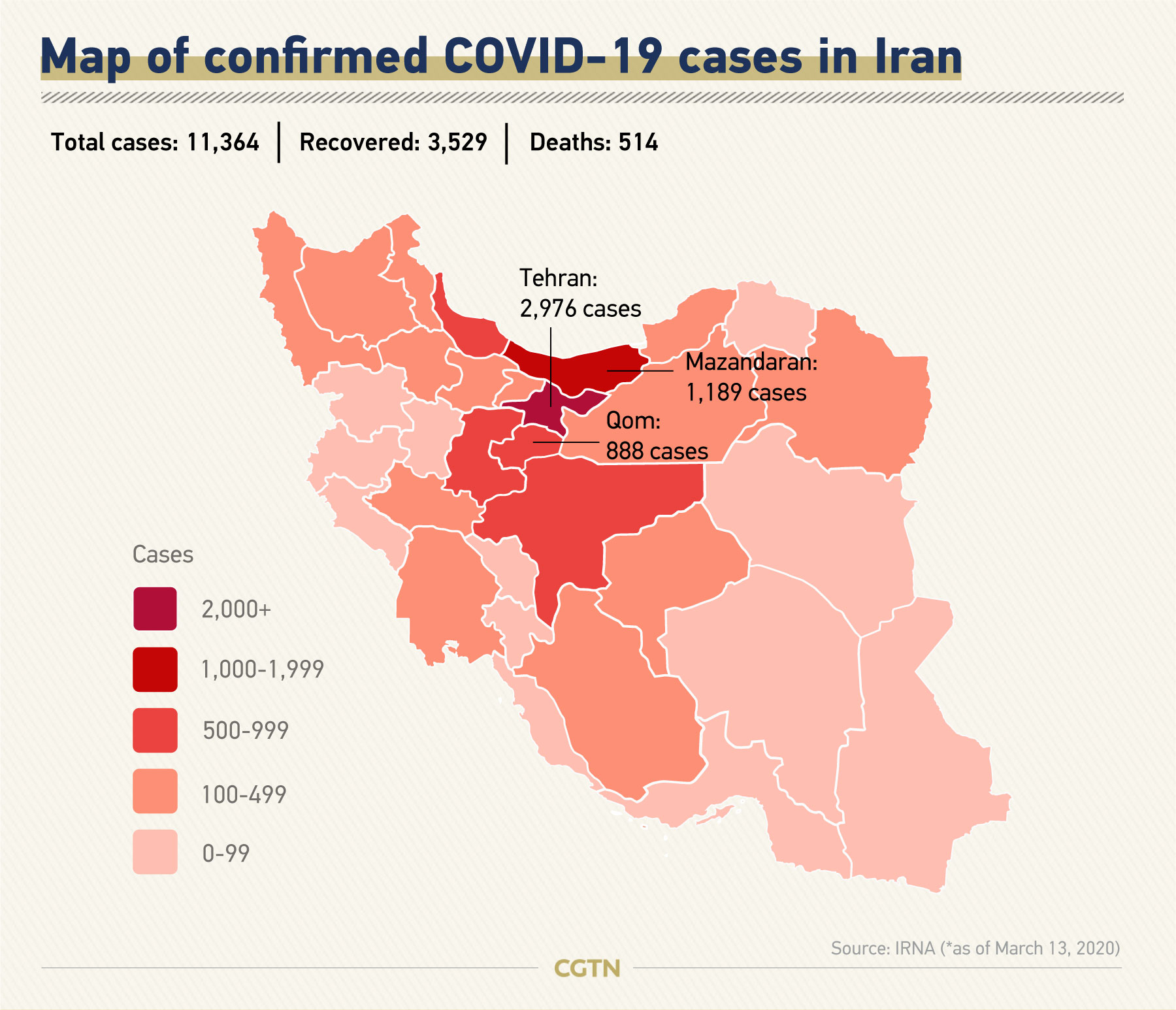 In response, authorities strove to limit the spread of COVID-19 by closing schools and cinemas, canceling sports events and Friday prayers.

Iran's parliament, or the Majlis, also closed on February 28 when the cases neared 400.

But unlike China or Italy, the only two countries with more cases than Iran for now, Iran has not locked down any of the virus hot spots.

Cases started to emerge outside the country that were traced back to Iran.

On February 21, Lebanon confirmed its first COVID-19 case, a 45-year-old woman who had traveled from Qom. Many other countries also reported their first cases – all with Iran travel history.

Most of Iran's neighboring states have put in place some kind of travel limitations, such as cutting flights and closing borders. 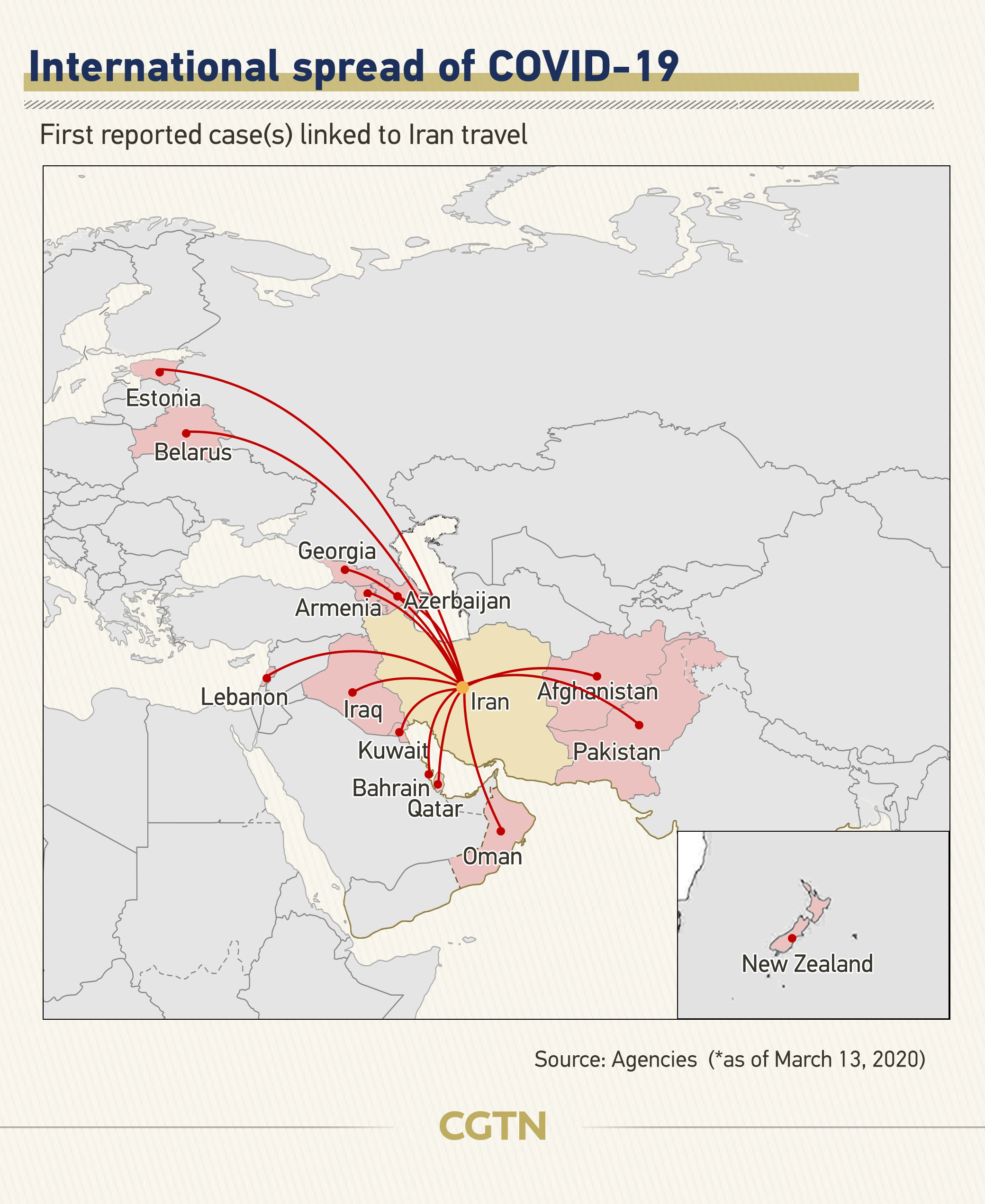 The disease also took a heavy toll on the Iranian government. By March 2, 23 members of Iranian parliament had tested positive for the virus, according to Al Arabiya. That's about eight percent of all parliament members.

Vice President Eshaq Jahangiri and two other cabinet members also contracted the virus, according to the Fars news agency on Wednesday.

Iran has 11 vice presidents. One of them, Massoumeh Ebtekar, caught the virus in late February.

Other prominent figures sickened by the disease were deputy health minister Iraj Harirch, who coughed and sweated at a press conference right before he was diagnosed, and Mohammad Mir Mohammadi, a member of Iran's expediency council that advises the Supreme Leader Ayatollah Ali Khamenei.

Iranian authorities announced a plan to mobilize 300,000 soldiers and volunteers to confront the virus on March 1, after closing all educational and cultural institutions across the country.

"We will go house by house to diagnose suspicious cases as soon as possible and if any suspicious case is diagnosed, the person will be sent to the treatment centers," Iranian Health Minister Saeed Namaki was quoted by Fars as saying.

Trucks and firefighters were deployed to Tehran's streets to spray disinfectant. Public places across the country were disinfected more frequently.

Iran also temporarily released about 70,000 prisoners to counter the outbreak.

Supreme Leader Khamenei canceled his March speech in the city of Mashhad for the Persian new year as part of a campaign to prevent further infections, according to a statement on his official site.

Following China's practice, Iran started building temporary hospitals. One has been built with 200 beds in the northwestern West Azerbaijan earlier this week, according to Fars. 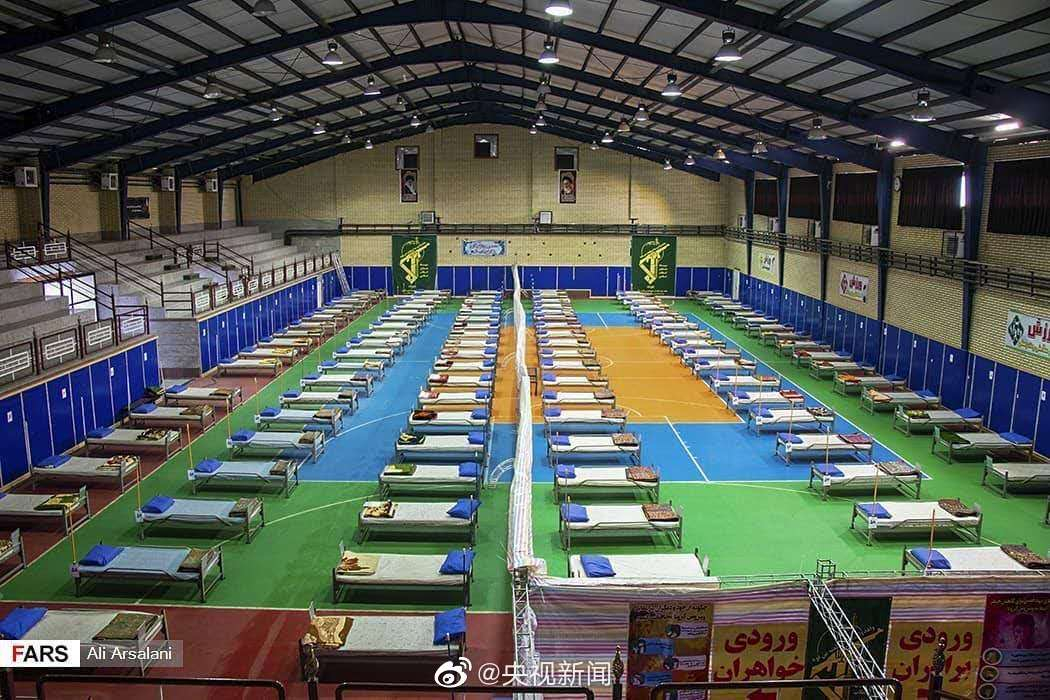 A 200-bed temporary hospital is set in Urmia in West Azerbaijan province to treat COVID-19 patients. /CCTV photo via Fars

A 200-bed temporary hospital is set in Urmia in West Azerbaijan province to treat COVID-19 patients. /CCTV photo via Fars

In China's Wuhan, such hospitals played a key role in containing the outbreak by providing timely treatment for about 12,000 patients with mild symptoms.

Iran has faced shortage of medical supplies since the United States re-imposed crippling economic sanctions in 2018. Such shortage became more acute as the pandemic gripped the country, analysts said.

Over 500 people in Iran have been killed by the virus. 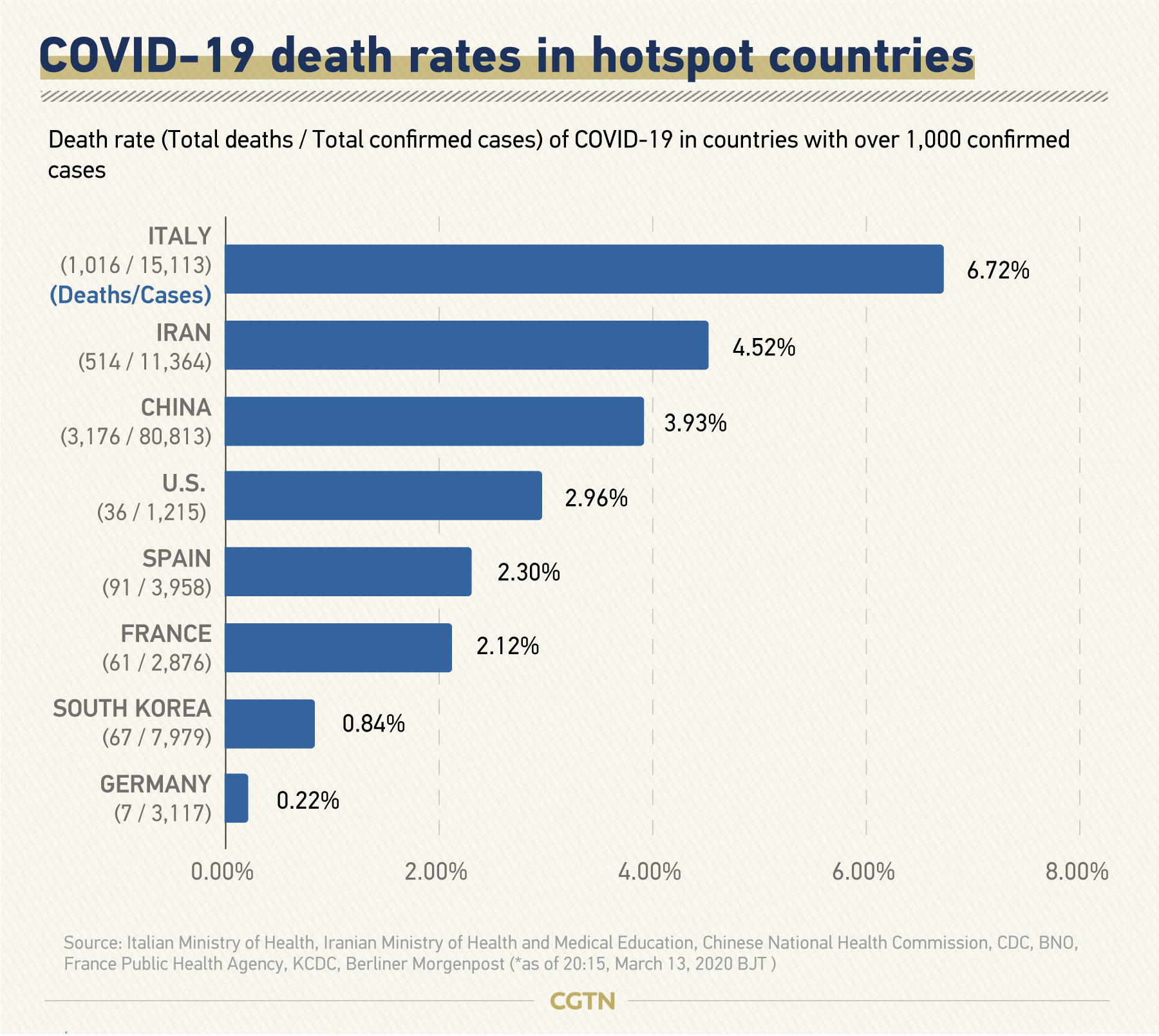 On February 29, a Chinese medical team arrived in Tehran to help Iran counter the disease.

By Friday, at least nine consignments of aid from China, including tons of protective suits and masks, test kits and medical equipment had been sent to Tehran, said Iranian state media.

A World Health Organization team loaded with supplies arrived in Iran on March 2. Other countries such as Russia, Japan also sent assistance.

But these supplies were far from enough to meet Iran's demand.

In a tweet on Thursday, the foreign minister urged countries to assist Iran with masks, gloves, medicines, test kits, ventilators, ECMOs among other medical supplies.

Iran's efforts to battle the disease "are stymied by vast shortages caused by restrictions," Zarif said.

In a letter to the UN Secretary-General Antonio Guterres, Zarif said U.S. sanctions obstructed foreign medical supplies to Iran amid outbreak, and urged "the need for lifting all U.S.' illegal and unilateral sanctions," reported IRNA on Thursday.