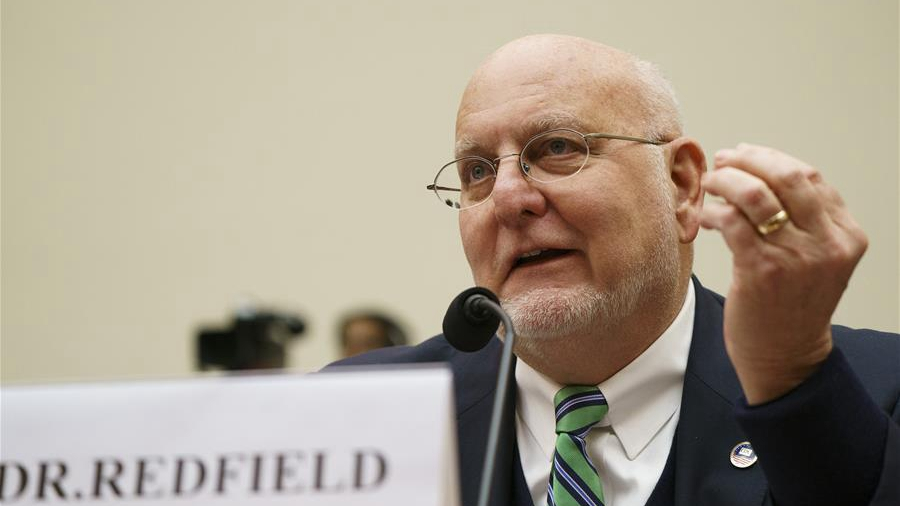 The director of U.S. Centers for Disease Control and Prevention(CDC) Robert Redfield testifies before the House Foreign Affairs Committee during a hearing on Coronavirus Disease 2019 on Capitol Hill in Washington D.C., the United States, February 27, 2020. /Xinhua

The director of U.S. Centers for Disease Control and Prevention(CDC) Robert Redfield testifies before the House Foreign Affairs Committee during a hearing on Coronavirus Disease 2019 on Capitol Hill in Washington D.C., the United States, February 27, 2020. /Xinhua

Robert Redfield, director of the U.S. Centers for Disease Control and Prevention (CDC), has confirmed that some COVID-19 deaths had been diagnosed as flu-related in the United States.

The news has led to questions about whether this new coronavirus originated in the States in the first place, given that the flu season began last September in the country—months before the outbreak in China's Wuhan, the host city for the 2019 Military World Games.

Questioning of the virus' origin began in February when a Japanese couple tested positive for COVID-19 in Japan after returning from a trip to Hawaii, where they were reportedly treated as having seasonal influenza.

On February 21, a program produced by TV Asahi questioned whether some coronavirus patients were treated as flu patients, given the poor health checkups ordinary Americans have and the similar symptoms it shares with COVID-19.

The CDC immediately refuted the possibility suggested by the Japanese television network. However, 20 days later, its director made a U-turn, admitting such cases.

The assumption that COVID-19 originated in the United States is logical given that the 2019 Military World Games was held in Wuhan, the epicenter of the outbreak in China, between October 18 and 27, just weeks before the first case was reportedly recorded in December in the city.

Reports on the shutdown of the U.S. Army Medical Research Institute of Infectious Diseases in Fort Detrick in July 2019 have added to the suspicion. According to a report by the New York Times, "Problems with disposal of dangerous materials led the government to suspend research at the military's leading biodefense center," where research involved dangerous microbes like the Ebola virus.

An article published on the website of the Canada-based Center for Research on Globalization earlier this month also asked, "Did the virus originate in the U.S.?" The author, Larry Romanoff, quoted a top virologist in Taiwan, who said both Iran and Italy had deciphered the locally prevalent genome and had declared them of different varieties from those in China, meaning they did not originate there but were of necessity introduced from another source.

The article points out, "Due to the enormous amount of Western media coverage focused on China, much of the world believes the coronavirus spread to all other nations from China, but this now appears to have been proven wrong."

In fact, a January 24 article published on The Lancet medical journal website also indicated the origin of the virus may differ from what was first thought. Seven clinicians from Jinyintan Hospital, one of the key hospitals treating COVID-19 patients in Wuhan, revealed in the paper that 13 of the first 41 cases they treated had no link to the Huanan Seafood Market, the initial location to which cases of COVID-19 were linked, and, "no epidemiological link was found between the first patient and later cases."

An article published on January 26 by the Science journal quoted Daniel Lucey, an infectious disease specialist at Georgetown University, saying, "That's a big number, 13, with no link." He further noted if the new data is accurate then the virus possibly spread silently between people in Wuhan—and perhaps elsewhere—before the cluster of cases from the seafood market was discovered in late December.

China's top respiratory specialist Zhong Nanshan has also said "though COVID-19 was first discovered in China, it does not mean it originated from China."

The source of the virus is a scientific issue and requires scientific and professional investigation. Global epidemic prevention and control is at a critical stage. As of March 16, there were over 80 thousand confirmed cases outside China, of which more than three thousand had died. Many countries, including the United States, have declared a state of emergency.

Keeping in mind the spirit of science, the U.S. shares a responsibility with the rest of the world to find out when and where COVID-19 first appeared. It's not only a responsible move for the life and health of the American people, but also a necessary step to curb the spread of the virus and safeguard global public health security.