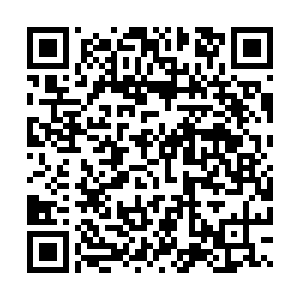 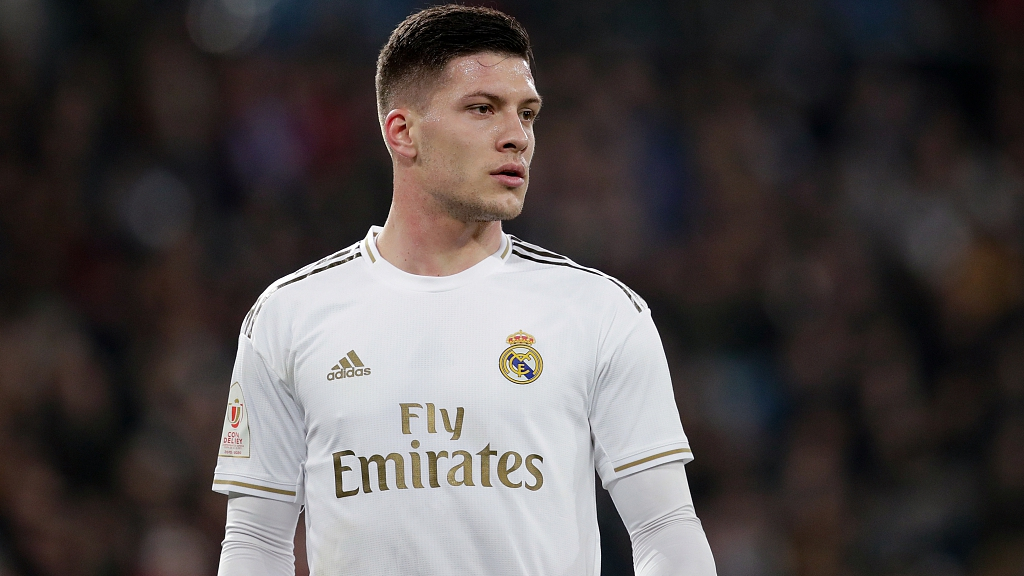 Jovic during the Spanish Copa del Rey clash between Real Madrid and Real Sociedad at the Santiago Bernabeu, February 6, 2020. /VCG

Jovic during the Spanish Copa del Rey clash between Real Madrid and Real Sociedad at the Santiago Bernabeu, February 6, 2020. /VCG

Jovic was given permission to fly to his home country of Serbia by Real Madrid, who went into quarantine last week after one of the club's basketball players tested positive for the virus.

But after arriving in Belgrade, the 22-year-old was "seen on the streets of the capital, celebrating the birthday of his girlfriend," according to several local media outlets.

Serbia has declared a state of emergency to curb the coronavirus outbreak in the Balkan nation. One of the measures is a 28-day quarantine for all Serbian citizens traveling home from European countries most affected by the virus, including Spain.

Following media's reports on Jovic's behavior, Brnabic said: "We have the negative example of our football stars who earn millions and have ignored the obligation to self-isolate so they can return home." 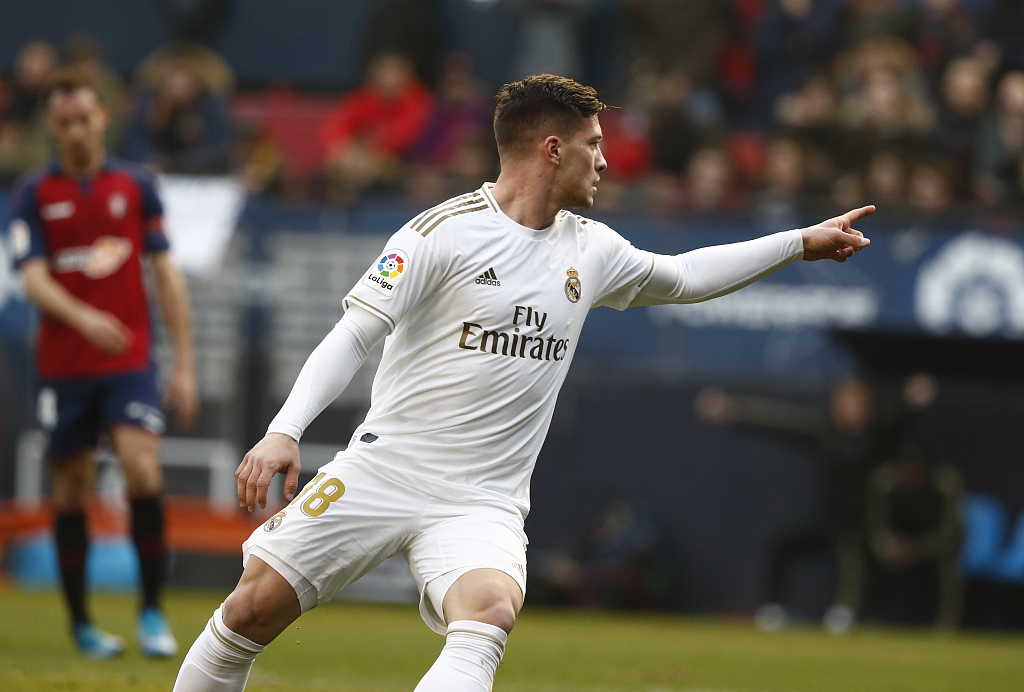 Jovic celebrates his goal during the league clash between Osasuna and Real Madrid at El Sadar Stadium, February 9, 2020. /VCG

Jovic celebrates his goal during the league clash between Osasuna and Real Madrid at El Sadar Stadium, February 9, 2020. /VCG

Serbia's Tanjug news agency revealed that the prosecutor's office in Belgrade have "instructed the police to press charges against Luka Jovic for breaching self-isolation measures after arriving in Serbia from Spain."

"If he breaches the quarantine again, he faces harsher measures and possibly arrest. The law applies to everyone and the authorities will not discriminate regardless of what one does for a living," Tanjug added.

Late on Thursday, Jovic was forced to apologize on social media in an attempt to diffuse the situation.

"First of all, I am very sorry that I am the main topic (of debate) these days, and I am sorry that people are constantly writing about me and not about the main protagonists in the fight against this crisis, who are the doctors and all those who work in healthcare," he  said.

"In Madrid, my COVID-19 test was negative. So I decided to travel to Serbia, to help and support our people, in addition to being close to my family, with the permission of my club.

"When I arrived in Serbia, they gave me the test and it came out negative. I am very sorry that some people have not done their job professionally and have not given me specific instructions on how I should behave during my isolation."

"In Spain it is allowed to go to buy food or buy products in pharmacies, which does not happen here (in Serbia). I apologize to everyone if in any way I have hurt or put someone in danger. I hope that together we can overcome all this." 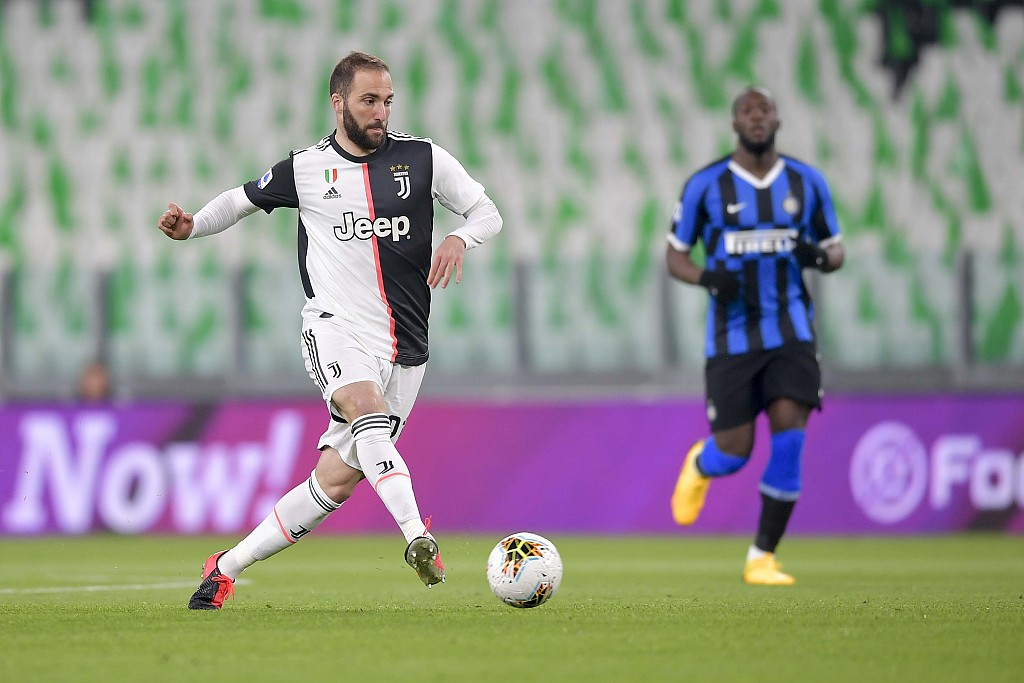 Gonzalo Higuain controls the ball during the Serie A match between Juventus and FC Internazionale at Allianz Stadium, March 8, 2020. /VCG

Gonzalo Higuain controls the ball during the Serie A match between Juventus and FC Internazionale at Allianz Stadium, March 8, 2020. /VCG

Meanwhile, Juventus striker Gonzalo Higuain has left the team's quarantine and returned home to Argentina, according to multiple reports in Italy on Thursday.

The 32-year-old international had been in isolation along with the rest of Serie A leaders' squad following teammate Daniele Rugani's positive test a week ago, with France's Blaise Matuidi also catching the virus in recent days.

Higuain had reportedly asked Juve for permission to visit his sick mother, and had a test confirming he was negative for COVID-19. The recommended quarantine period is two weeks.

As flights to Argentina are all blocked, Higuain organized a transfer by private jet with his family first to France late on Wednesday, then Spain and from there fly to South America, Sky Sports Italia and Gazzetta Dello Sport reported.

Star attacker Cristiano Ronaldo had remained in Portugal to self-isolate after his mother suffered a stroke. 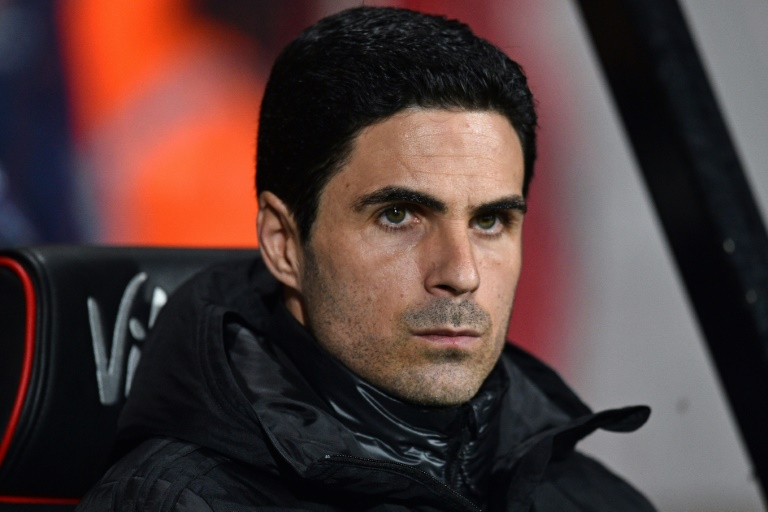 As a result of the Spaniard's diagnosis, the Arsenal squad were sent into self-isolation for 14 days.

"We're pleased to say that Mikel is feeling much better," Arsenal said in a statement. "He's in good spirits, doing detailed planning with the coaches and speaking to the players regularly."

The Gunners do not know when they will return to action on the pitch with football in England suspended until at least April 30 due to strict measures on mass gatherings to control the virus.

Manchester United said on Thursday that they will keep paying their casual staff even if the season's remaining Premier League games are cancelled or played in empty stadiums.

Brighton & Hove Albion, Crystal Palace and Wolverhampton Wanderers are some of the other Premier League clubs that have also announced plans to keep paying casual workers despite the game being suspended.