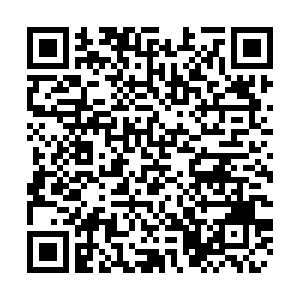 Since March, the situation of COVID-19 has gradually improved in China, but many countries around the world have shown a trend of spread and expansion. A lot of foreign countries have started to suspend classes and cancel on-site teaching. With classes halted, Chinese students overseas now have a difficult choice between returning to China and staying.

However, with imported novel coronavirus cases on the rise, standing at a total of 314 until March 21, the question of whether overseas Chinese students should return home has gone viral on Chinese social media. 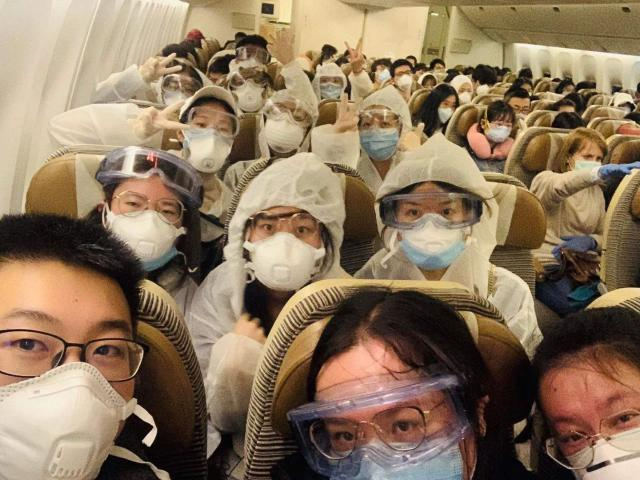 Students wear full protective gear on a plane flying back to China from Europe.

Students wear full protective gear on a plane flying back to China from Europe.

Several of the students who wished to return created group chat to help each other buy tickets, which are currently in extremely short supply. Because international flights are canceled every day, most of them need to buy several tickets at a time in case of a sudden change.

Airline tickets prices have also soared due to a surge in the number of overseas Chinese students opting to return home. A charter flight from London to Shanghai cost up to 180,000 yuan (about 25,000 U.S. dollars) per passenger, and all 40 available tickets sold out instantly.

To protect themselves during the flight, the students prepared masks, goggles and even protective suits to wear on the airplane. One student, who studied in Switzerland, told a China National Radio reporter she didn't eat anything or go to the bathroom on her flight home.

On March 15, the Beijing municipal government implemented a new policy that all passengers arriving on international flights must be quarantined in designated hotels for 14 days at their own expense. Upon arrival, the students will undergo a strict epidemiological examination and then be sent to designed hotels for quarantine. 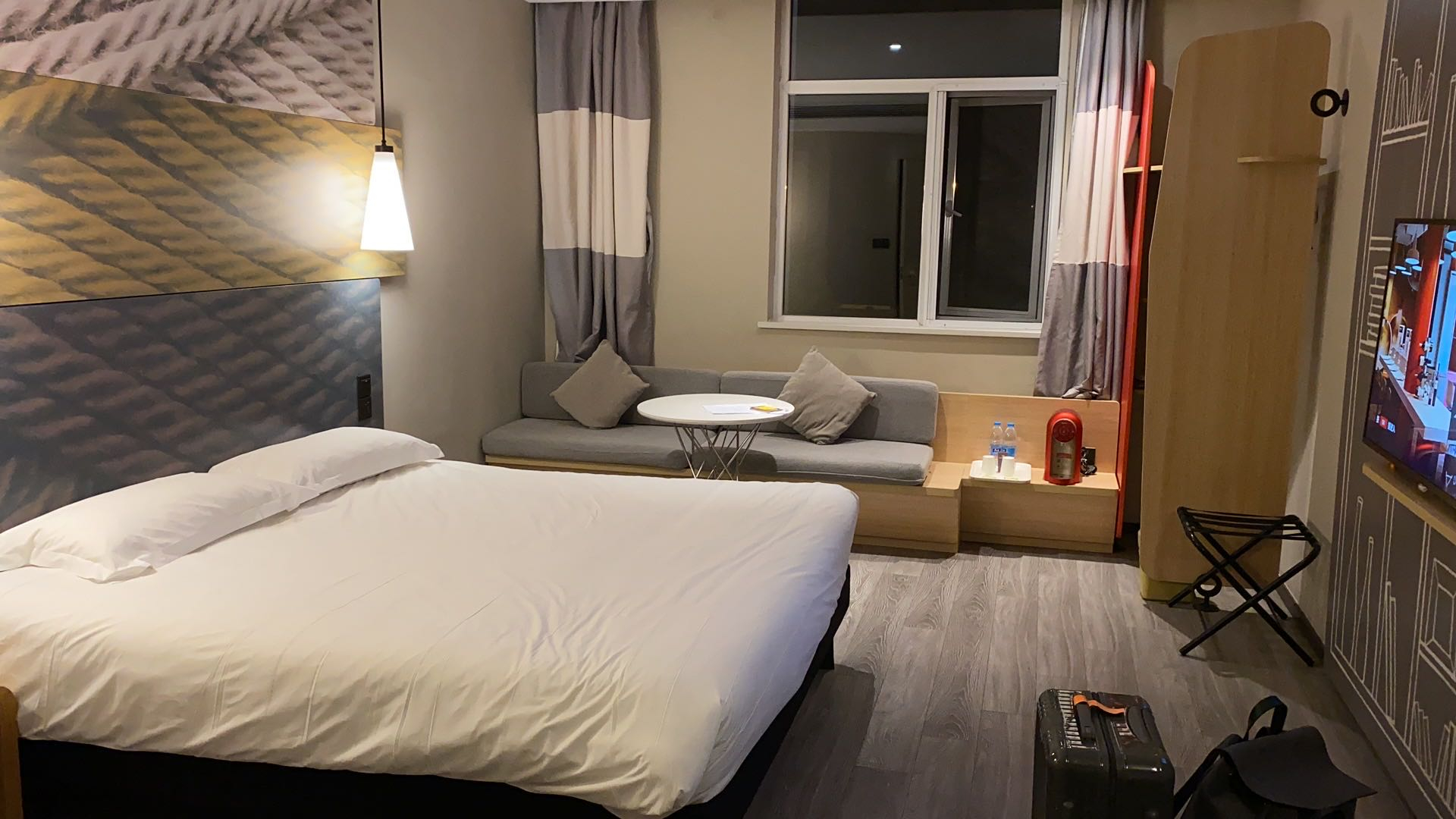 A photo of a room inside a designated quarantine hotel in Shanghai taken by an overseas Chinese student now under quarantine at their own expense in the city.

A photo of a room inside a designated quarantine hotel in Shanghai taken by an overseas Chinese student now under quarantine at their own expense in the city.

Other students are worried about the risk of getting infected during the long international flight. On March 21, China reported 46 new confirmed cases of COVID-19, and 45 of them are imported, according to officials, bringing the number of imported cases to 80.

Yao Qingling, a student from Loughborough University in the UK, told CCTV that she decided to stay because cross-infection during the flight may add an extra burden to Chinese local medical efforts.

After witnessing the crowd at the airports, many Chinese students abroad also chose to stay rather than add to China's challenges.

The ongoing study is also one of the students' concerns. Many countries have yet to implement an adjusted student visa policy amid the epidemic, and some students worry about being able to return to their host country to continue their studies after they return to China. Afraid that they might be barred from re-entering for a while, some students have chosen to stay and take online courses at home. 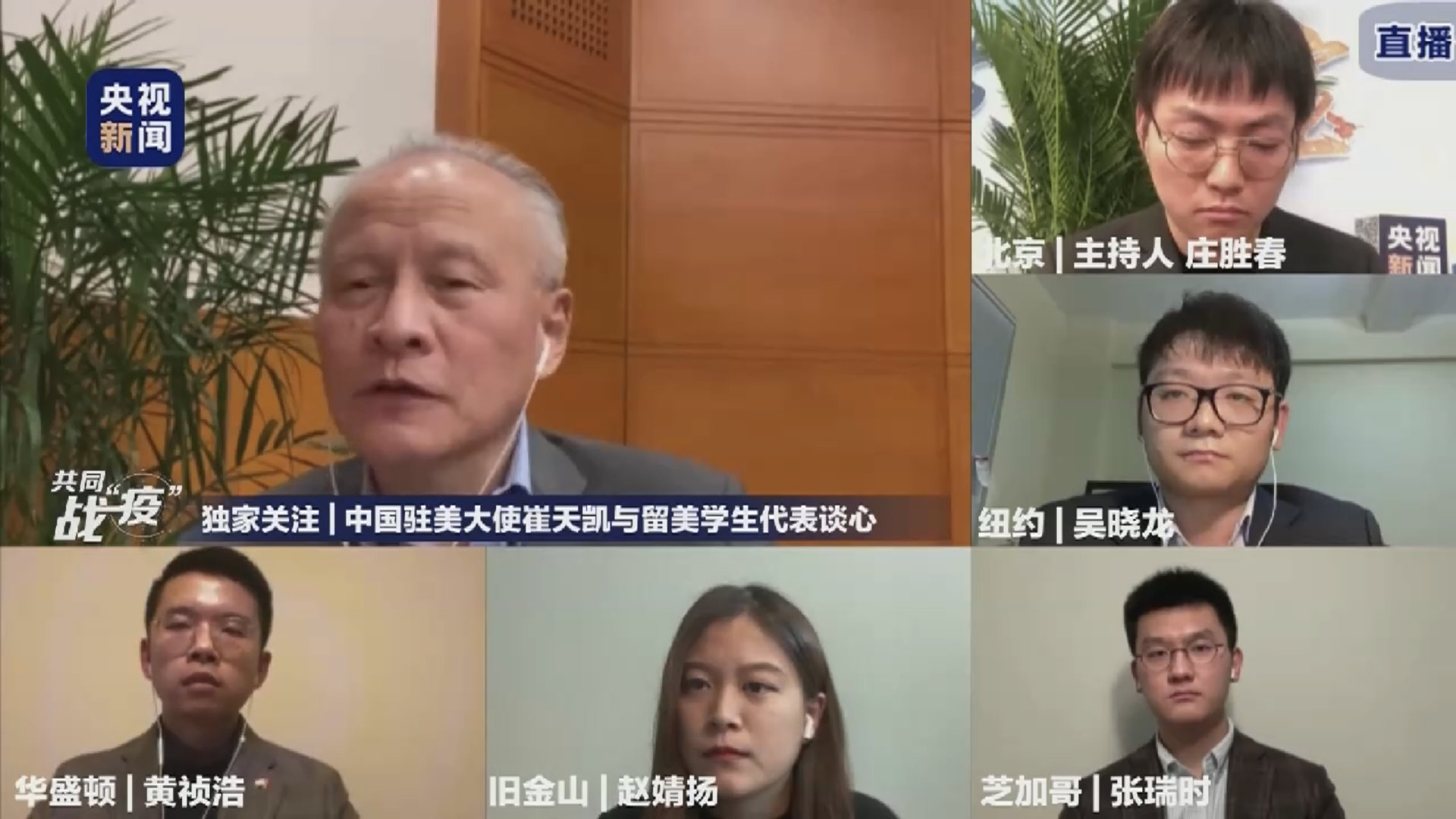 Chinese Ambassador to the United States Cui Tiankai visited the CCTV News Live Room and talked about the epidemic with representatives of students studying in the United States, March 18, 2020.

Chinese Ambassador to the United States Cui Tiankai visited the CCTV News Live Room and talked about the epidemic with representatives of students studying in the United States, March 18, 2020.

On March 18, Chinese Ambassador based in the United States Cui Tiankai shared his opinions about whether overseas students should return to China now in CCTV News' Live Room. Three issues were discussed.

The first was about finding out the latest local epidemic situation and the latest measures taken by the local government. Travelers were encouraged to evaluate the situation on the ground and abide by local regulations.

The second issue concerned getting clear on the details about the current domestic detection and quarantine measures for people returning from overseas, including the regulations of each community. People should learn the prevention and control measures during the flight and make adequate preparations in advance.

The third point, and perhaps the most important, was about finding out one's own health status. Because older people with underlying illnesses and those who have weak immune systems are more susceptible to infection, people were encouraged to consider whether their health was good enough to travel in a sealed space for more than 10 hours.

Regardless of what they chose to do, the students were also reminded that they had the support of their country.