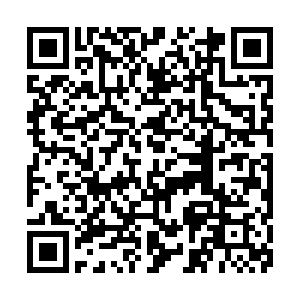 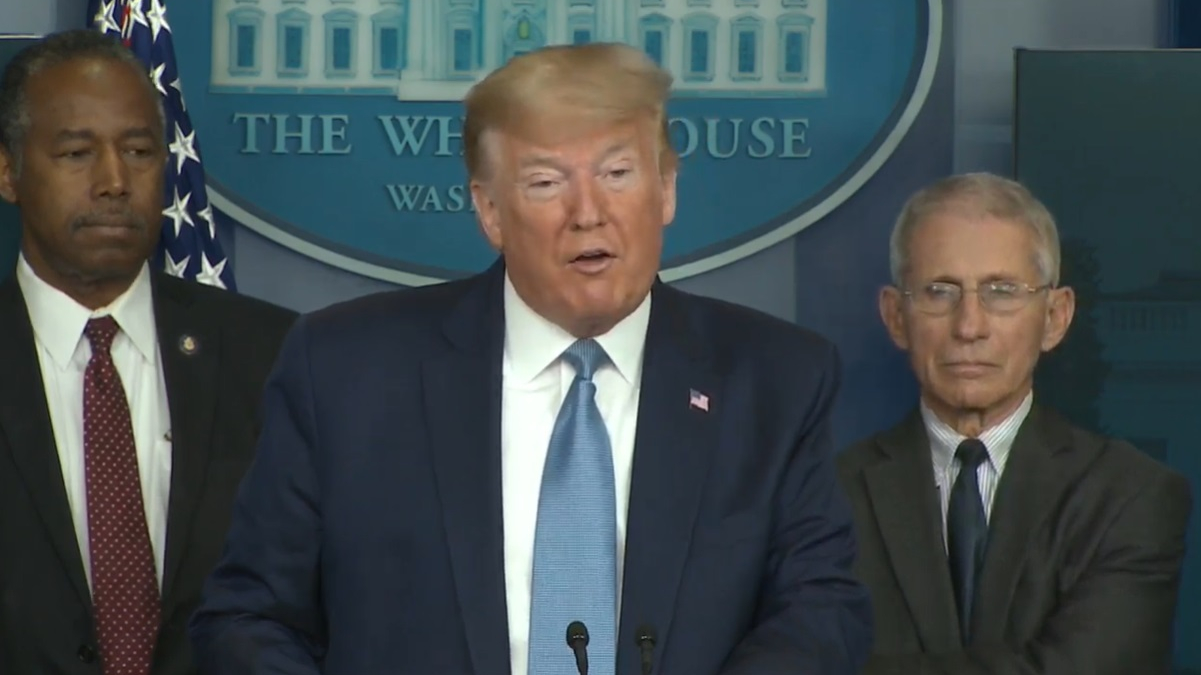 A State Department cable obtained by the news outlet "The Daily Beast" has found that U.S. President Donald Trump has demanded an all-government-agency effort to collaboratively blame China for the outbreak of the COVID-19 pandemic. 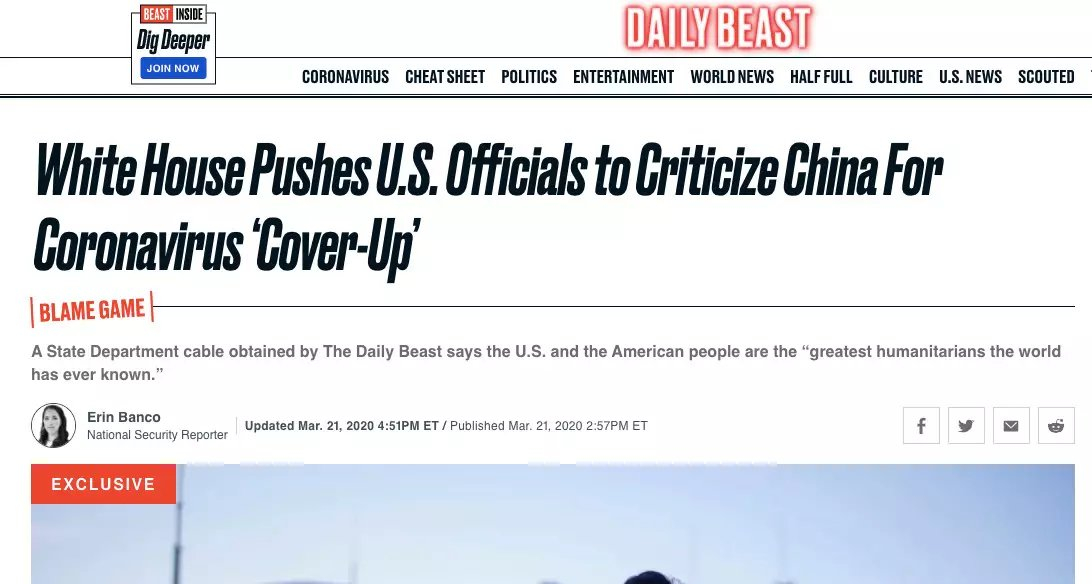 Screenshot of The Daily Beast article

Screenshot of The Daily Beast article

The cables emphasize a series of talking points which argue that Beijing implemented a "cover-up," hid the existence of the disease from the world, failed to warn other countries and that they rejected America's assistance, all because the Communist Party "cared more about its reputation than people's suffering." Evidence has already shown that this plan is in motion, with organizations such as the U.S. National Security Agency (NSA) also tweeting anti-China content along the same lines.

This effort is an obvious effort to distract from the deteriorating situation within the United States, and evidence of it is not on Trump's side. Even if these talking points could be taken at face value, the Washington Post revealed yesterday that American intelligence warned the president that a pandemic was likely as early as January, yet he continued to ignore this advice and up until March played down the crisis and even offered praise to China's response. Now that the virus has reached the United States, he is ironically doing exactly what he is accusing Beijing of doing, which is caring more about his own electoral gain and political standing than people's lives. 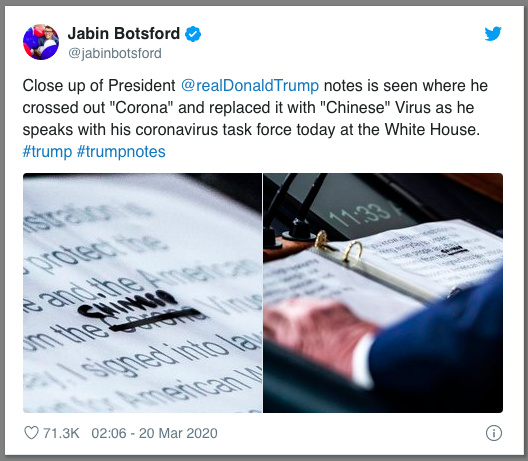 Screenshot of Washington Post photographer Jabin Botsford's Twitter shows U.S. President Donald Trump has replaced "Corona" with "Chinese" in one of his speeches.

Screenshot of Washington Post photographer Jabin Botsford's Twitter shows U.S. President Donald Trump has replaced "Corona" with "Chinese" in one of his speeches.

If what the administration claims about China is true, to any extent, does this translate into a justification to blame them for the pandemic in the United States? The administration wants to rewrite history and make people believe that America was kept in the dark and caught completely off guard, hindering their own response to a surprise pandemic, therefore China is responsible. Really? As noted above, American intelligence was warning Trump about a pandemic for months. It is not like the administration didn't know what was going on or that they had no time to plan. Instead, the president simply hoped that it would go away as he did not want to ignite fear that harmed markets.

Thus, throughout January and February, he quoted the following in both tweets and press conferences: "We have it totally under control. It's one person coming in from China. It's going to be just fine" (January 22), "We pretty much shut it down coming in from China (February 2)," "The Coronavirus is very much under control in the USA… Stock Market starting to look very good to me!" (February 24), "I think that's a problem that's going to go away… They have studied it. They know very much. In fact, we're very close to a vaccine (February 25)," "The 15 (cases in the U.S.) within a couple of days is going to be down to close to zero" and "We're going very substantially down, not up (February 26)."

Thus, despite receiving high-level warnings concerning a potential outbreak of the virus, the president actively played it down and believed the American response was sufficient. However, this negligence instead created a major outbreak in the United States of which he did not implement contingency methods until it was too late and already well past the transmission point.

Now, the administration wants to rewrite history and say everything that is happening here is China's fault, arguing illogically that if Beijing had been more open then America could have acted to prevent this sooner and none of this would be happening.

However, citing a distrust of China is not an excuse not to act, rationally it would be an excuse to take more, not less contingency.

Thus the president is openly and purposefully deflecting his own responsibility and attempting to use the entire machinery of the American state to do so. Last week, when he said, "I don't take any responsibility," he meant it.

The administration believes that by doing this they can distance themselves from the fact that their entire economic legacy in office has been unraveled within weeks, with tanking stock markets, a recession looming and soaring unemployment.

However, in the long run, this cynical scapegoating will not save him. History will not focus on events in China, but ultimately how the president of the United States illustrated a total deficit of leadership and integrity in happily denying a looming national crisis when it was situated under his nose.

The argument he did not know does not hold any credibility, and the evidence that he instead refused to act proves damning. Instead of following this rhetoric and accusing Beijing of cover-ups, Americans should ultimately look a bit closer to home.