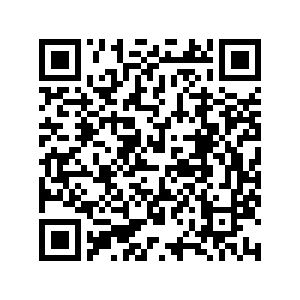 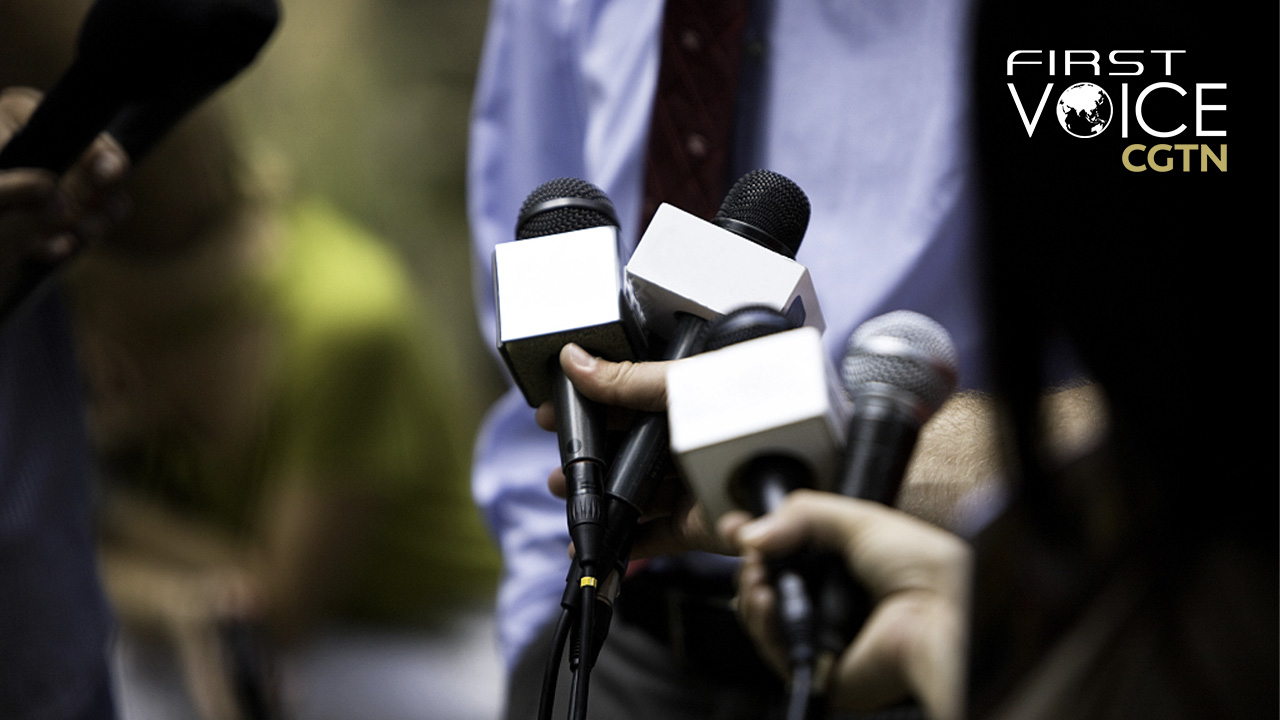 "The fear and suspicion directed at China in the devastating early days of the coronavirus outbreak have made a 180-degree turn: It is the West that now frightens Asia and the rest of the world," The New York Times (NYT) reported on March 20. As China reported no new domestic cases for the first time on Thursday, the number of people contracting COVID-19 is surging in the rest of the world at an alarming rate.

Also turning 180 degrees is Western media's attitude toward China. Since the outbreak, the NYT, Wall Street Journal and a slew of mainstream media outlets in the West have displayed their unparalleled skills in playing the blame game, accusing China of a laissez-faire approach when the virus was first detected in Wuhan but labeling the country's follow-up lockdown policy as "suppression" of human rights.

Interestingly, with COVID-19 gradually spiraling out of control in their countries, these media organizations have now started to learn lessons from China, a nation that had once been bombarded with their harsh critics. "Only an uncompromising response – locking down cities, shutting factories, testing thousands – has brought China's contagion under control," the NYT commented. BBC and The Guardian, previously known for their China-unfriendly stances, published several detailed articles analyzing how Asian countries managed to curb the spread of COVID-19 while the West dithered.

Many started to ask: Why can't the West, especially the U.S., grapple with the virus as successfully as China, South Korea, and other Asian countries did? "There is a chance some politicians in the U.S. and Europe, lulled by decades of stability in their countries after the Second World War – decades in which they have waged war overseas but never seen life totally upended at home – simply didn't want to recognize the threat," an article in The Guardian said, offering an explanation for the West's slow response to the virus. 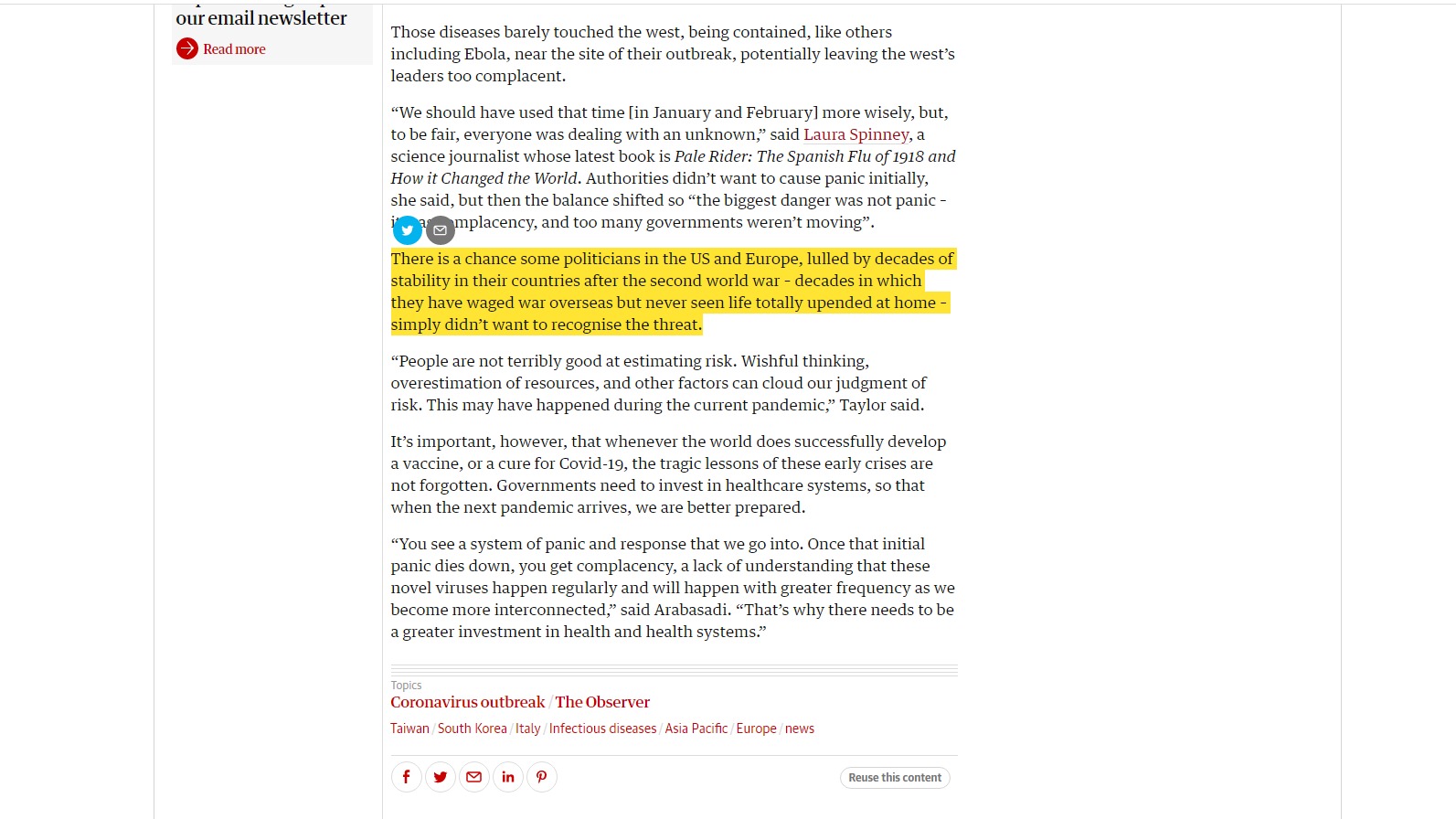 Screenshot of The Guardian's article.

Screenshot of The Guardian's article.

While Fox News still called COVID-19 a "hoax" and a "scam" to impeach U.S. President Donald Trump several weeks ago, an increasing number of American media outlets believe the Trump administration is to blame for the COVID-19 chaos in the country. "As the virus reached into the United States in late January, President Trump and his administration spent weeks downplaying the potential for an outbreak," the NYT said in another article, indicating that this is why the U.S. lagged far behind other countries both technically and politically in the anti-virus fight in the first place.

The pandemic, as CNN analyzed, will likely rob Trump of what has been his main argument for re-election – "a booming stock market, low employment and a strong economy." But instead of learning his lesson, Trump has been attempting to shift focus away from his failures in his initial response to the outbreak by pushing blame back to China.

The president has repeatedly called COVID-19 a "Chinese virus." Apart from stirring up xenophobic sentiments, a State Department cable obtained by The Daily Beast revealed that the White House is launching a communications battle against China by accusing the latter of "orchestrating a cover-up and creating a global pandemic."

Underscoring China's missteps has been one of the most frequently used tactics by American politicians in distancing themselves from critics. Western media is fully aware of it. "The administration is engrossed in a communications battle around how to disseminate the flow of crucial health information to the American public while at the same time deflecting criticism that the White House was unprepared for the pandemic and that President Trump is at odds with members of his coronavirus task force," The Daily Beast commented.

As the president of the world's largest economy, Trump is supposed to showcase his leadership in this global fight against COVID-19. But his performance is disappointing to not only countries in need of international help, but also domestic citizens and media outlets. In the sharp contrast, China is shouldering its due responsibilities with concrete actions. This may explain the shift in the Western media's attitude on the issue.