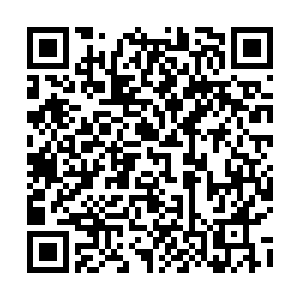 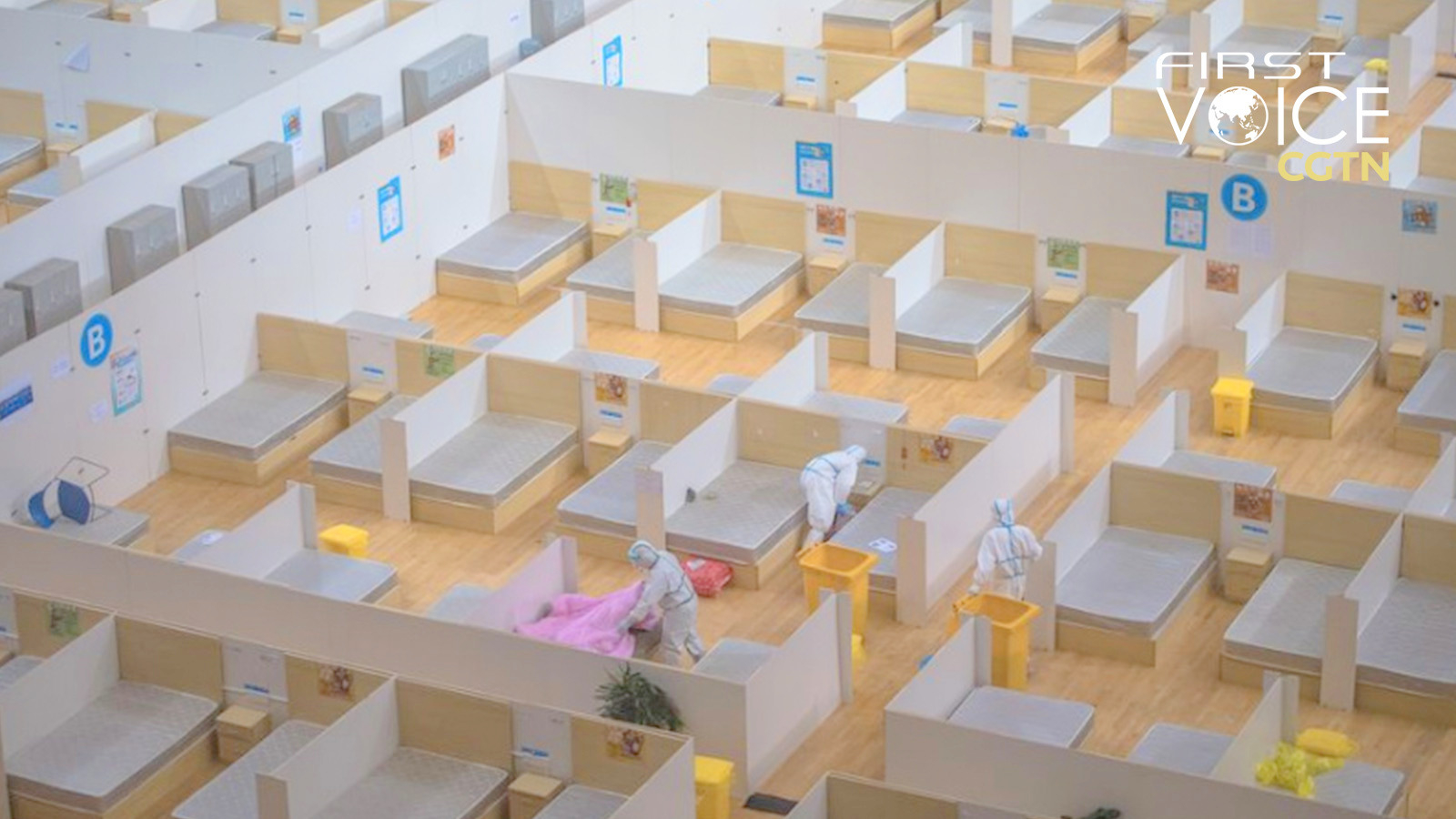 As China's domestic situation gets better and the situation in other countries worsens, more people around the globe have started to realize that China did a great job in containing the virus from spreading at an enormous effort, and the U.S. government did almost nothing. This shift in perception is visible across three dimensions to form a cube of a new world order.

The first is the traditional media dimension. An AFP article titled "China's virus strategy: a model for the world?" deconstruct China's model and compares its measures with those of the West. For example, when China tells its citizens to wear masks outdoors, some western governments only mandated that medical workers wear them. The consequences were crystal clear, as China has successfully contained the virus while people are panicking in many western countries where the virus is rapidly spreading across many borders.

As concern grew, U.S. mainstream media began to turn their gaze inward, questioning their own country. In less than a week after the Washington Post article "The coronavirus is Trump's Chernobyl," the New York Times reiterated that claim in an opinion piece titled "Trump's Chernobyl," which concluded that the Trump administration's response to the pandemic is really a disaster. 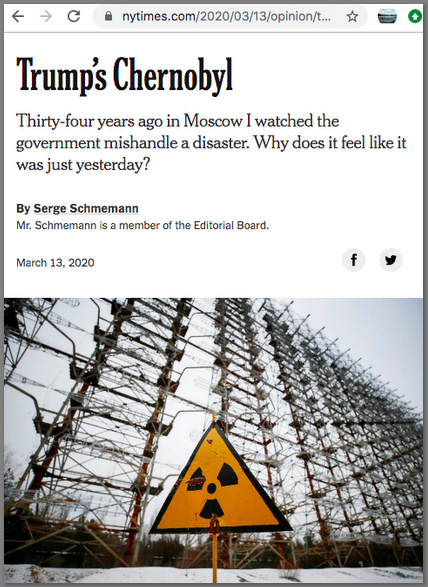 A screenshot of an opinion piece on the New York Times website describing U.S. President Donald Trump's response to the COVID-19 as "Trump's Chernobyl."

A screenshot of an opinion piece on the New York Times website describing U.S. President Donald Trump's response to the COVID-19 as "Trump's Chernobyl."

Second is the social media dimension. The main battlefield for Trump and U.S. mainstream media in his first term as president, social media is the primary space where the world can see his ridiculous attempts to blame the Chinese. It is also an arena for global commentators to differentiate between real and fake news regardless of the media house or country from which it originates.

The words used in the various social posts also paint a picture of the treatment of the issues, and it is all there for the world to see. For example, Maitreya Bhakal, a commentator from India, noticed that many western media used different words to report on the same news in different countries. Bhakal noted that when China did not do well in the first few days of the pandemic, the West said it is a "cover-up," but when the U.S. did something similar, western media simply said it "ignored experts' warnings."

This is not the first time that western media painted a negative picture on social media to get widespread attention, and it certainly will not be the last. There are many examples every day. Bhakal cited another instance in which many western media outlets criticized China for "propaganda" even as another western media outlet, the Daily Beast, revealed the Trump administration's "communications plan" to accuse China.

The third is the think-tank dimension. The Center for Strategic and International Studies (CSIS), a top think-tank in the U.S., published an article by one of its senior fellows Jacob Kurtzer titled "The Impact of COVID-19 on Humanitarian Crises." In it, Kurtzer suggested that "policymakers in the United States should consult humanitarian organizations for guidance on ethically managing challenging operations with scarce resources." This shows that the U.S. had not prepared for and did not have the relevant experience to make enough medical resources at this critical juncture.

Nevertheless, two specialists on world affairs Kurt M. Campbell and Rush Doshi published their co-written article "The Coronavirus could reshape global order" in Foreign Affairs magazine by showing how China's leading role in dealing with the virus has given the rest of the world a country to depend on while the U.S. does almost nothing and blames others.

By sharing its knowledge and experience, China has won many friends. Raghuram Rajan, a former chief economist and director of research at the International Monetary Fund (IMF), said in his Financial Times article "Rich countries cannot win the war against coronavirus alone" that the world needs to protect the supply chain in the medical field which mainly depends on relatively poorer nations.

"Since this is necessarily a global war, we need to organize the production of basic weaponry – testing kits, cleansing chemicals, masks, protective clothing, ventilators – across the world," he wrote. 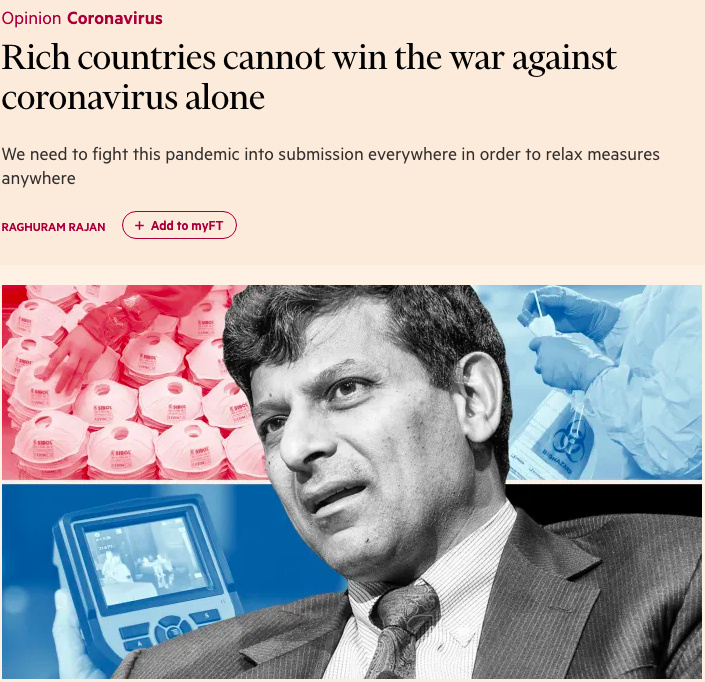 Although it has not ended its fight against the virus domestically yet, compared with the U.S., it is doing a lot more in the fight against the spread of COVID-19. For example, China has sent tons and tons of medical equipment to many countries that are in desperate need of resources, which shows China's capacity in resource mobilization, not only within the country but also around the globe.

Kronzen Zeitung, Austria's largest newspaper, highlighted this by reporting that China has sent 130 tons of medical equipment to Austria, twice the amount Austria sent to China when the disease first hit China.

These three dimensions show that China's efforts are greater than that of the U.S. in fighting the COVID-19. China has won a lot of support from the international community, while the U.S. is isolating itself as it continues to play a blame-game. It also has the capacity to help the global medical industry supply chain by providing made-in-China equipment and drugs.

On the cube of world stage made by these dimensions, China's potential has grown bigger and more powerful than before the pandemic, as exemplified by its actions across these three dimensions. Meanwhile, the U.S.' capability has and will continue to diminish even further as the blame on China strengthens.