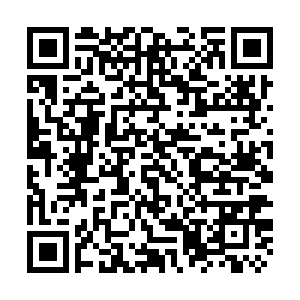 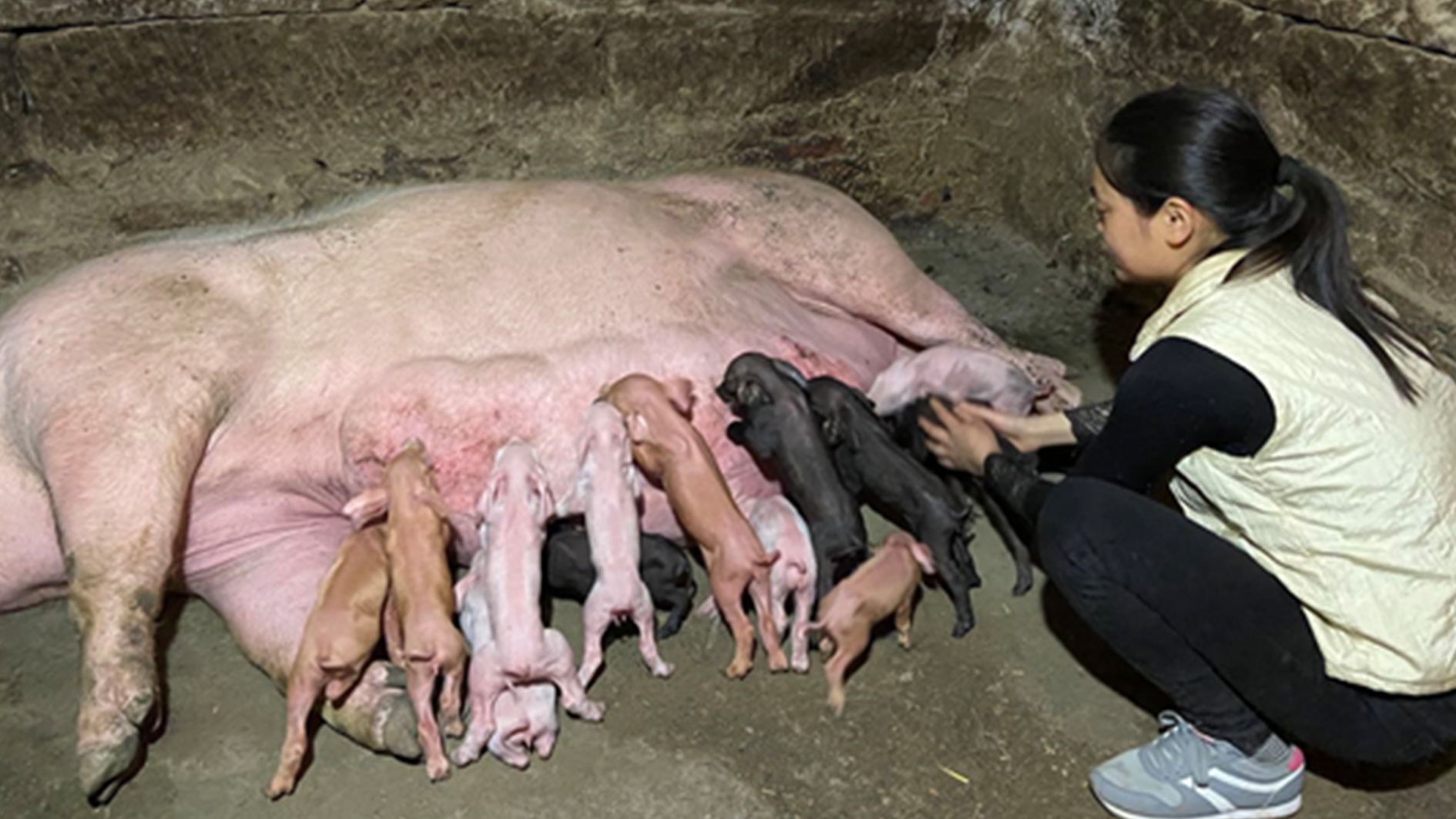 "I have never done this work before, but people change according to the environment. If there were no epidemic, I would not think of raising pigs at home," Li told CGTN.

Li used to work at a factory making spare auto parts in Wuhan, the epicenter of COVID-19 epidemic in China. There she earned about 5,000 yuan, or 700 U.S. dollars each month, a decent income for farmers who seek opportunities in cities.

She came home to celebrate the Lunar Chinese New Year in late January, just one day before the whole city was put on lockdown to contain the infectious coronavirus.

"I had intended to return to work after spending a few days with my grandmother, parents and my son," said Li. Her plan soon went astray. 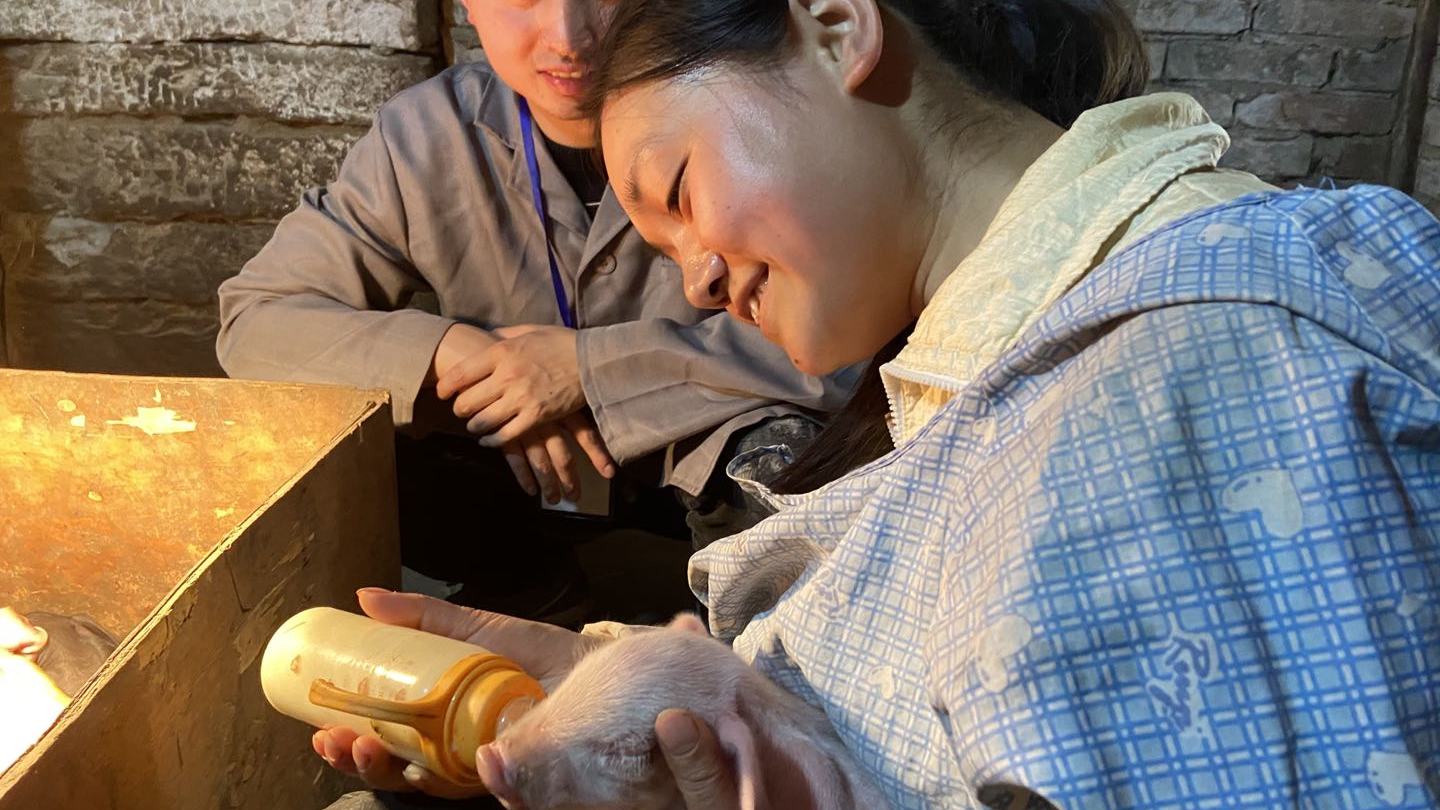 Li Chunyan feeds one of the newborn pigs at home. Yang Jinghao/CGTN

Li Chunyan feeds one of the newborn pigs at home. Yang Jinghao/CGTN

And it was then that two sows of her family were about to give birth.

"My parents kept some 30 pigs last year and made a considerable profit. So I think it's something worth trying," said Li, who has worked in different cities for nearly 20 years.

As a green hand, Li has a lot to still learn about farm animal care, including how to keep the piglets warm, feed them properly and keep them from contracting swine fever or flu. She just actively seeks consultations from the staff members of local service center on livestock breeding.

"I have another idea too. I want to raise several hundred chickens. I'm still discussing this with my parents, since they haven't done it on a large scale either," said Li.

Data shows that last year, about 290 million rural Chinese sought employment in cities. Undoubtedly, the epidemic has brought much pressure to this group, who are considered to be an important force for various cities' normal operation. With the resumption of many businesses, many still choose to venture out.

For Li, the unexpected episode also provides her a rare opportunity to think about her future life.

"I adapt to new environments easily. I love the lifestyle in my small village," she said.

Another reason behind Li's new choice is to spend more time with her 9-year-old son. It's a fact that among the migrant workers in China, most parents leave their kids with their grandparents.

A report jointly issued by UNICEF and Beijing Normal University in June 2019 showed, as of August 2018, there were about 6.98 million so-called "left-behind children" in China. The alternate-generation problem has aroused wide attention in recent years.

"My parents spoil him too much," said Li, noting that the kid's addiction to smartphone worries her very much.

During a conversation with her son, he said he didn't want his mother to stay home. "She would not be happy if I don't listen to her," he said.

As the massive poverty-relief campaign deepens, most of impoverished areas across China have been lifted out of poverty, with both infrastructures and people's livelihoods much improved. Many local governments are also encouraging people to come back home to explore opportunities.

"My hometown has undergone radical change. My father said he had never thought that a road would be built to my home," said Li. She illustrated that in the past, their bamboo could only be used as firewood, but now, it is turned into money as they can be sold easily.

Actually, in many villages, people can get financial support, including interest-free loans if they choose to start their own business.

Li said she is optimistic for her future development in the village. With the whole family staying together, more opportunities may be theirs to tap into.

"A pig farm may not be just a dream. But I have to practice step by step."