Will coronavirus give euroskepticism a boost?
By Justina Crabtree 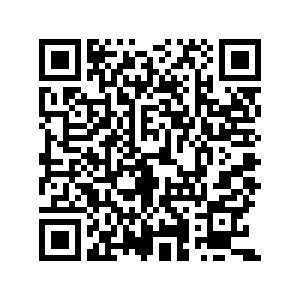 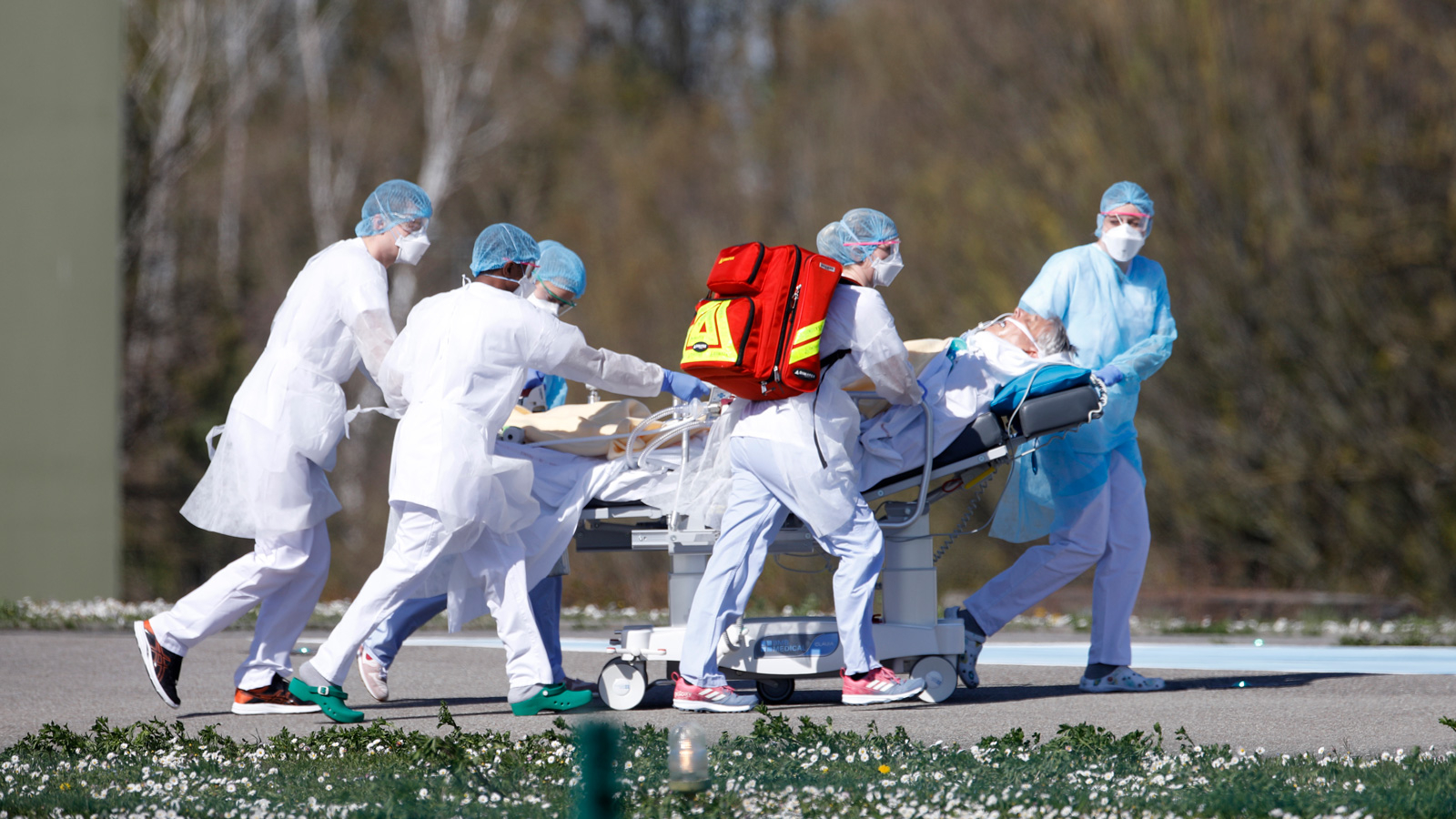 A patient with COVID-19 is evacuated from the civil hospital in Mulhouse, eastern France, March 23, 2020. /AP

A patient with COVID-19 is evacuated from the civil hospital in Mulhouse, eastern France, March 23, 2020. /AP

Borders are back in Europe. In fact, as the new coronavirus tightens its grip on one of the most interconnected regions on the planet, many of the ties that hold the European Union (EU) together are being severed in order to stem its spread.

As European countries have been forced to look inwards, grappling with human tragedy, stretched health services and potential economic collapse, could the coronavirus outbreak give euroskepticism a boost?

The 'single most important actor'

The rapid spread of the coronavirus in Europe was a shock for policymakers and the public alike. "There has not been much time for national governments to coordinate their positions with EU partners," said Douglas Webber, a France-based professor of political science at international graduate business school INSEAD.

In fact, the EU itself cannot do much to enact health policies across its 27 member states; this is up to individual countries. The body can only encourage attitudes and initiatives in fighting coronavirus.

"Where it has to act collectively is in steering the eurozone economy through the crisis," said Constantine Fraser, European political analyst at TS Lombard. The European Central Bank (ECB) is the "single most important actor" in the bloc, he added. 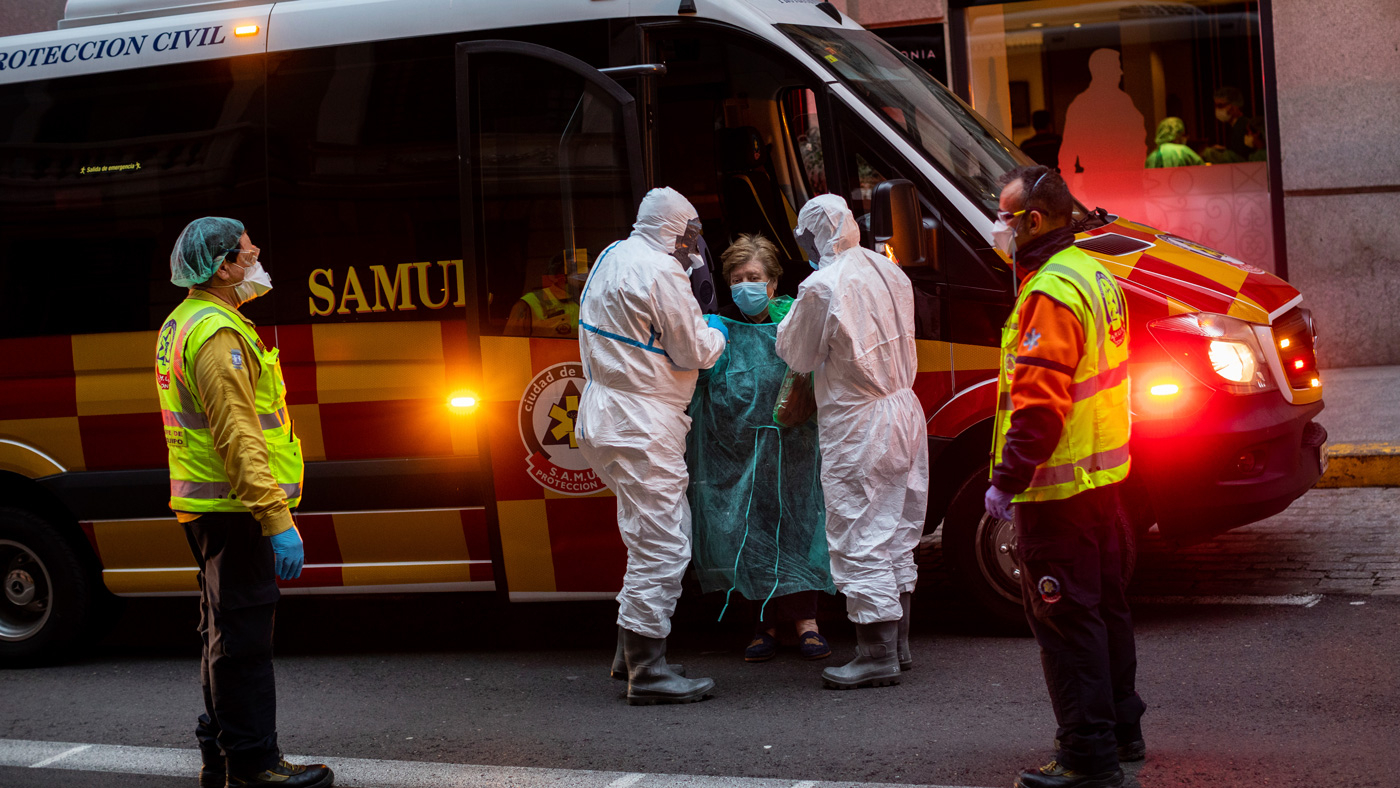 A patient is transferred to a medicalized hotel during the COVID-19 outbreak in Madrid, Spain, March 24, 2020. /AP

A patient is transferred to a medicalized hotel during the COVID-19 outbreak in Madrid, Spain, March 24, 2020. /AP

The ECB's response to the coronavirus crisis, however, got off to a bumpy start after the bank's president, Christine Lagarde, commented at the institution's monthly press conference in Frankfurt, Germany, that it was "not here to close spreads" between the borrowing costs of member states. This sparked a rebuke from Italian Prime Minister Giuseppe Conte.

But, the ECB appeared to offer an olive branch last Wednesday with the announcement of a 750 billion euro asset purchase program.

An awkward truth, according to a commentary published by Jose Ignacio Torreblanca of the European Council on Foreign Relations think tank on Monday, is that the countries suffering the most from coronavirus so far – Italy, Spain and France – have a "bad fiscal reputation, high public deficits, and relatively little fiscal space." Meanwhile Germany in particular, Europe's largest economy – and where the coronavirus outbreak has affected much fewer people – prefers tighter monetary policy.

Both positions could provide fodder for euroskeptic arguments, with hard-hit countries accusing the central bank of not doing enough to help, while their less-affected counterparts criticize it for recklessly introducing a glut of cash into the European financial system.

But according to Torreblanca, a nationalistic response to coronavirus is "foolish," "because all EU member states will face very similar health and economic crises."

Italy: The canary in the coal mine 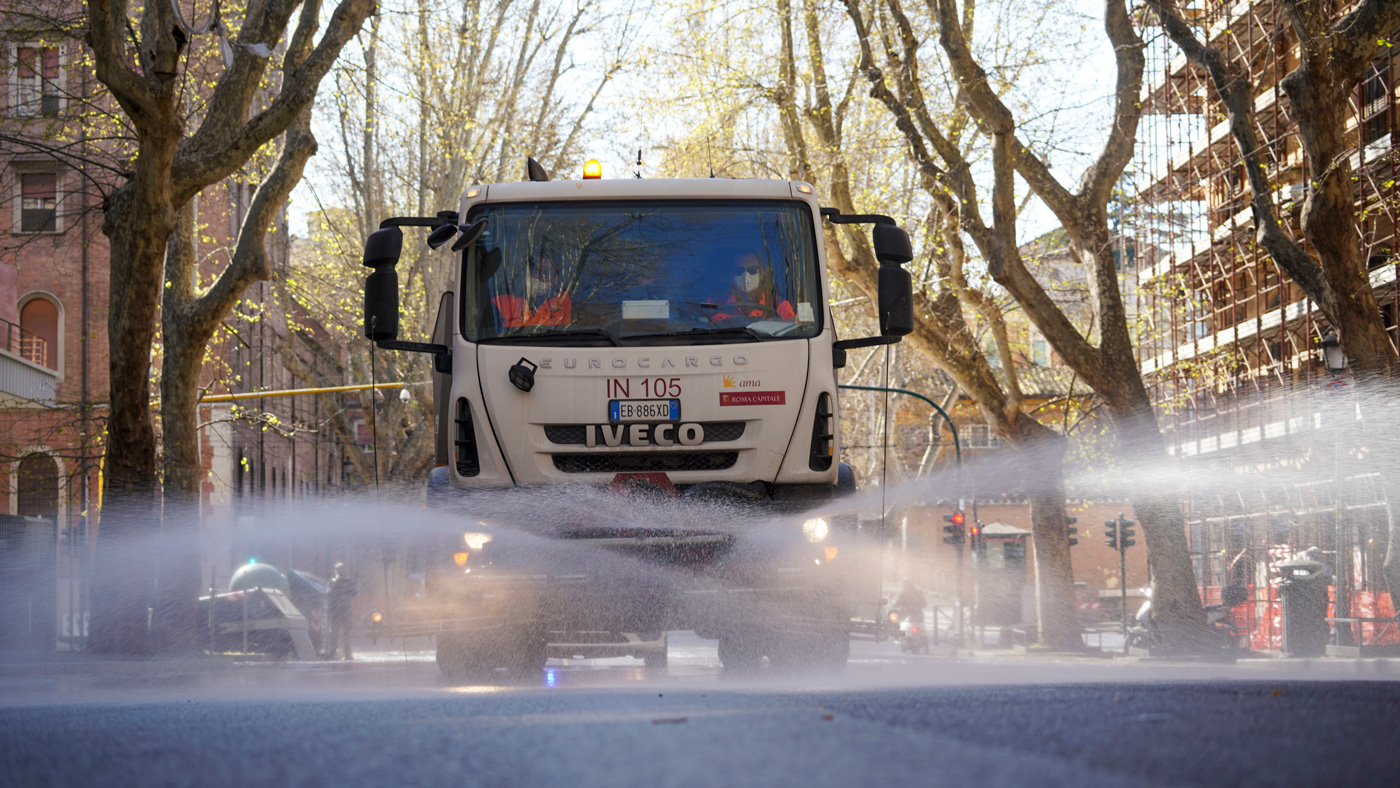 A truck sprays disinfectant as a preventive measure against the spread of coronavirus in Rome, Italy, March 25, 2020. /AP

A truck sprays disinfectant as a preventive measure against the spread of coronavirus in Rome, Italy, March 25, 2020. /AP

Italy, the country that has born the brunt of the coronavirus outbreak in Europe, is also one of the most likely to witness a rise in euroskeptic sentiment.

An anti-EU movement is well established in the country, fueled by a sluggish economy and calls for more control over its leaky borders that are part of the front line of Europe's immigration crisis. This has led to the rise of the euroskeptic, anti-immigration, populist Five Star Movement, currently part of a coalition government, and the League, which has also shared power in recent years.

"The EU will be anxious not to be seen to leave the country to its fate – and not to allow Italy's membership of the euro to hamper its flexibility in responding to the inevitable recession," said TS Lombard's Fraser.

In fact, Conte has seen his approval ratings rise during his handling of the coronavirus outbreak while support for the League has fallen. The prime minister is pro-Europe, a view at odds with others in his government.

Arguably, the threat to public health from coronavirus is the most pressing, meaning that Italians want national unity and strong leadership rather than debate and infighting.

"Nonetheless, the shift in public opinion is striking... 88 percent of Italians feel that Europe is failing to support Italy in the crisis, while only four percent believe that it is doing enough," said the European Council on Foreign Relations on March 18, citing polls by Italian news agency Dire mid-March. 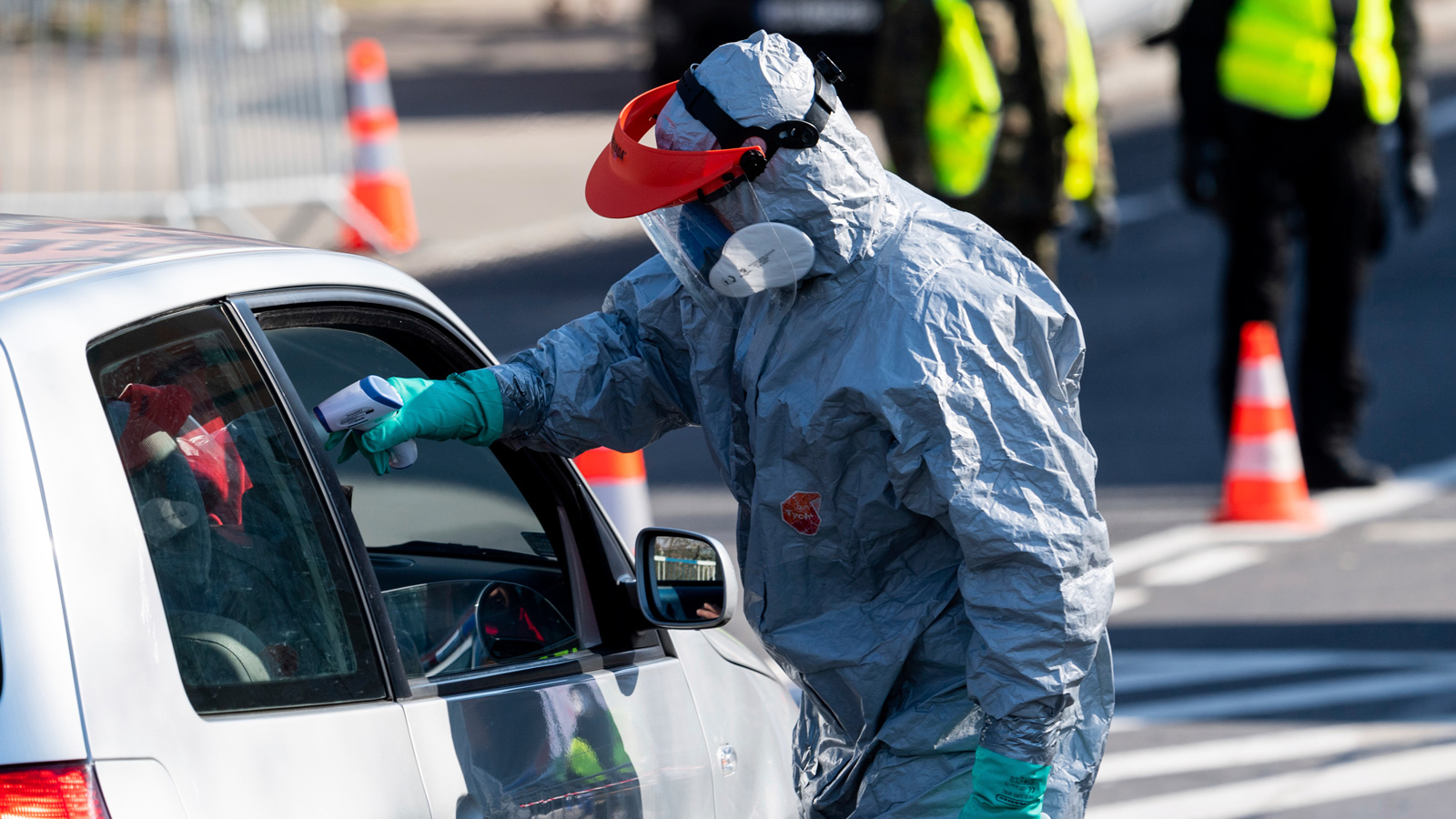 A man in a protective suit uses a thermometer to check the temperature of a driver on the Bridge of Friendship at the German/Polish border in Goerlitz, Germany, March 24, 2020. /AP

A man in a protective suit uses a thermometer to check the temperature of a driver on the Bridge of Friendship at the German/Polish border in Goerlitz, Germany, March 24, 2020. /AP

On the one hand, the coronavirus outbreak has lent itself to an anti-globalization message, the halting of international trade and travel necessary to preventing its contagion. But at the same time the World Health Organization, leading the medical effort against the disease, is a symbol of multilateralism.

It is too early to tell whether or not border closures in Europe have been effective against coronavirus, though China's lockdowns appear to have worked. While contemporary calls for stricter border measures have been slung around Europe by euroskeptic politicians such as Hungarian Prime Minister Viktor Orban as well as groups further to the right, it remains to be seen whether or not these will have any sticking power.

"Politically, a narrative of 'us and them' is effective, as is a focus on taking back 'control' of the borders in order to protect citizens, at a time when the spread of the virus feels very much out of control," said Emily Mansfield, principal economist for Europe at The Economist Intelligence Unit (EIU). But, crisis could make the European public more risk averse and favor the political status quo.

There has been support for strong, visible leaders: French President Emmanuel Macron, as well as Conte, has also seen a boost to his approval rating.

But, "Over time the likelihood of major political conflicts developing as a consequence of the crisis will increase – to the point where it may be difficult for governments to prevent social and political disorder. The longer-term potential for political polarization and radicalization is very high," said INSEAD's Webber.

Ultimately, euroskepticism's endgame has changed following a drawn out, painful Brexit process. "The focus I think will be on closing borders and keeping asylum seekers out, rather than quitting the euro or EU," said Mansfield of the EIU.