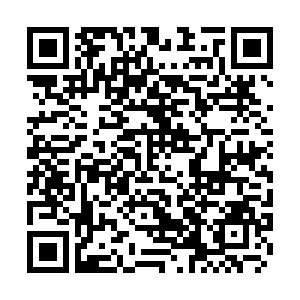 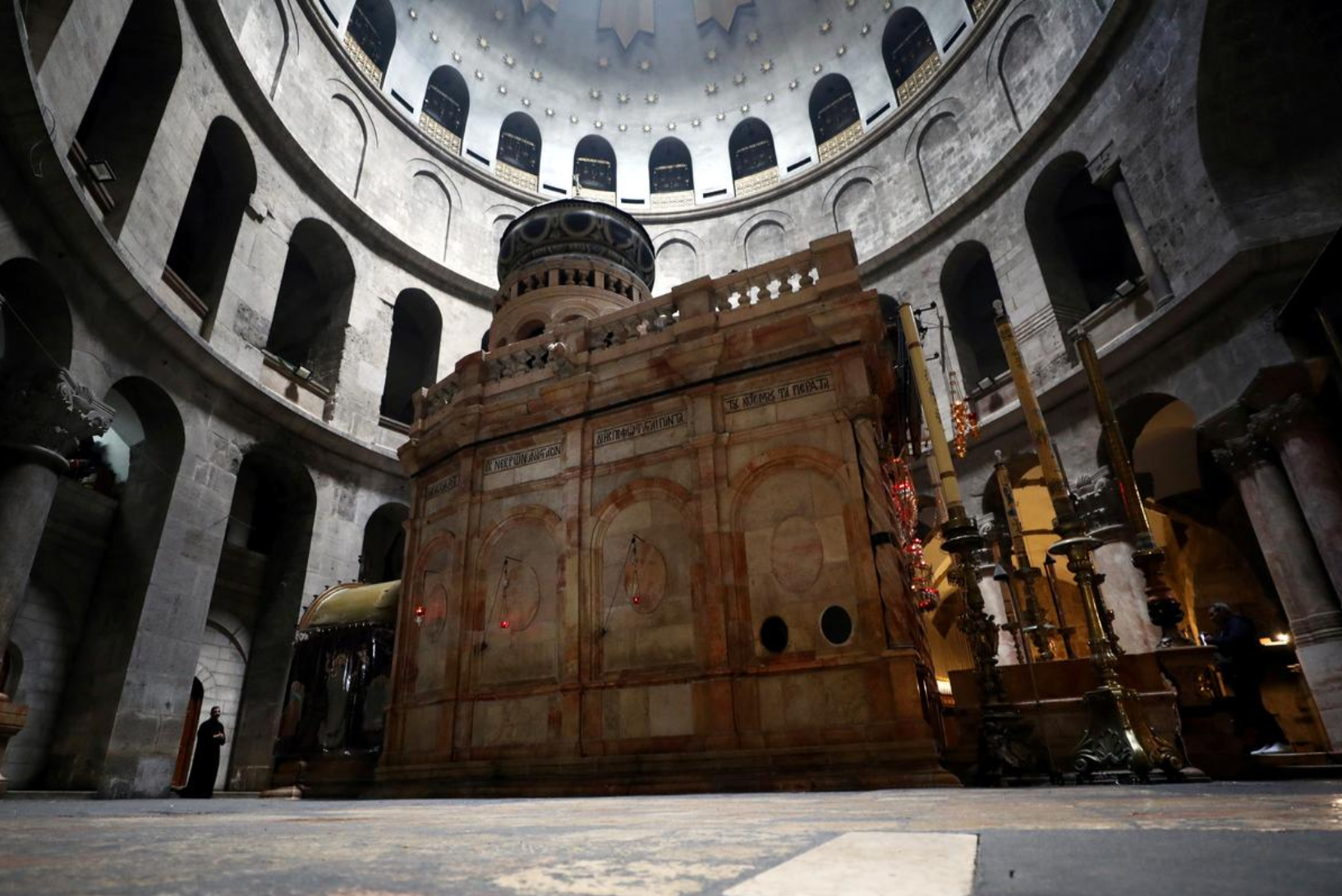 A general view shows the structure housing the purported tomb of Jesus in the burial place, known as the Edicule, at the Church of the Holy Sepulchre, in Jerusalem's Old City, March 22, 2020. /Reuters

A general view shows the structure housing the purported tomb of Jesus in the burial place, known as the Edicule, at the Church of the Holy Sepulchre, in Jerusalem's Old City, March 22, 2020. /Reuters

Jerusalem's Church of the Holy Sepulchre, revered in Christian tradition as the site of Jesus's crucifixion and burial, was closed on Wednesday as a precaution against the coronavirus.

The closure comes in the build-up to Easter, the most important festival in the Christian calendar, which Roman Catholics this year celebrate on April 12. Thousands of pilgrims and tourists would normally flock to the city, whose streets are now virtually deserted.

The closure, initially for a week, followed a meeting between Israeli police and church leaders as the number of confirmed COVID-19 cases climbed to 2,369, and two more Israelis died overnight, bringing the total to five, according to the Health Ministry.

Israeli Prime Minister Benjamin Netanyahu warned on Wednesday that Israel will have no choice but to implement a complete lockdown within the next few days unless there is an immediate improvement in the trend of the number of people infected with coronavirus. His speech came only four hours after a new round of stricter regulations to contain the coronavirus outbreak came into effect at 5 p.m. local time.

The Holy Sepulchre lies in the Christian Quarter of Jerusalem's walled Old City. A church was first built there in the 4th century under Constantine the Great, the Roman emperor who converted to Christianity. The Greek Orthodox, Armenian Orthodox, and Roman Catholic churches share custody of the building. Others, including Copts, Ethiopian, and Syrian Orthodox, also hold services there. 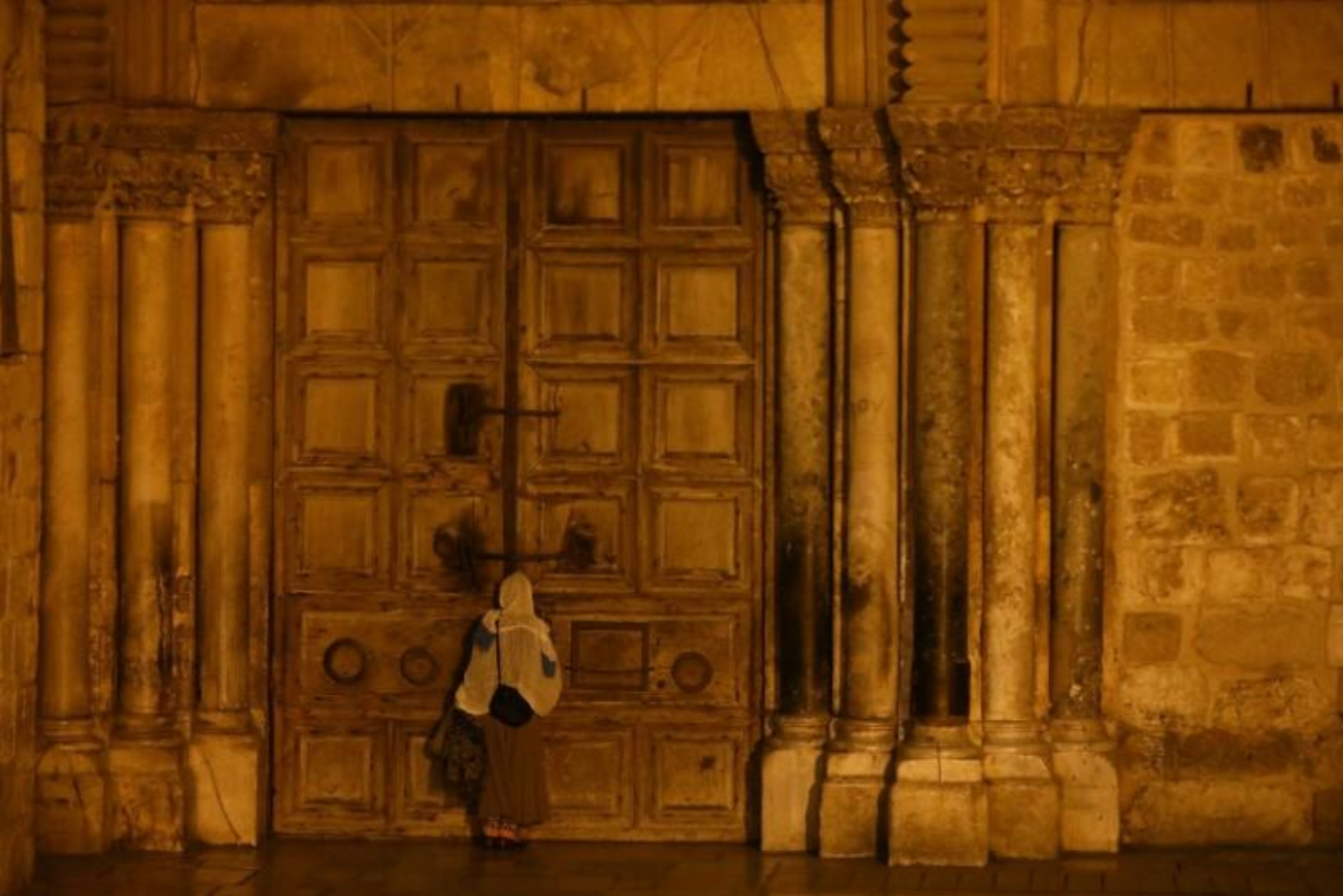 A woman stands in front of the closed entrance door of the Church of the Holy Sepuchre in Jerusalem's Old City, March 9, 2020. /Reuters

A woman stands in front of the closed entrance door of the Church of the Holy Sepuchre in Jerusalem's Old City, March 9, 2020. /Reuters

"The initial understanding is that this order is valid for one week, although nobody knows how long this crisis will take," said Wadie Abu Nassar, spokesperson of the Assembly of Catholic Ordinaries of the Holy Land.

Abu Nassar said that "if, God forbid, this situation goes on too long and it enters into the season of Easter," church authorities hoped to find arrangements to celebrate within the Israeli government's restrictions. Such is the importance of the site, he said, that the denominations would try to ensure that "celebrations and prayers will continue," by small groups of clerics abiding by the rules.

However, the health ministry's limitation on gatherings of more than 10 people meant that pilgrims and other public visitors would not be allowed inside.

Jerusalem has sites sacred to Judaism, Christianity and Islam, and all three religions have taken precautions. Jewish authorities on Wednesday instructed all synagogues to close and to hold prayers outdoors, for no more than 10 people at a time.

At the Western Wall, the holiest place where Jews are allowed to pray in Jerusalem, they have instructed the faithful to refrain from holding mass prayers and from kissing the stones.

On Sunday, Muslim religious officials suspended all prayers in the hilltop compound around the Dome of the Rock and Al-Aqsa Mosque, the third holiest place in Islam. The shrines themselves had already been closed.